Accessibility links
Missing Malaysian Jet May Never Be Found, Head Of Search Warns : The Two-Way With no firm data on how fast the plane was flying and how far it actually went, the operation to find it is "the most challenging ever," retired Australian Air Chief Marshal Angus Houston cautions. 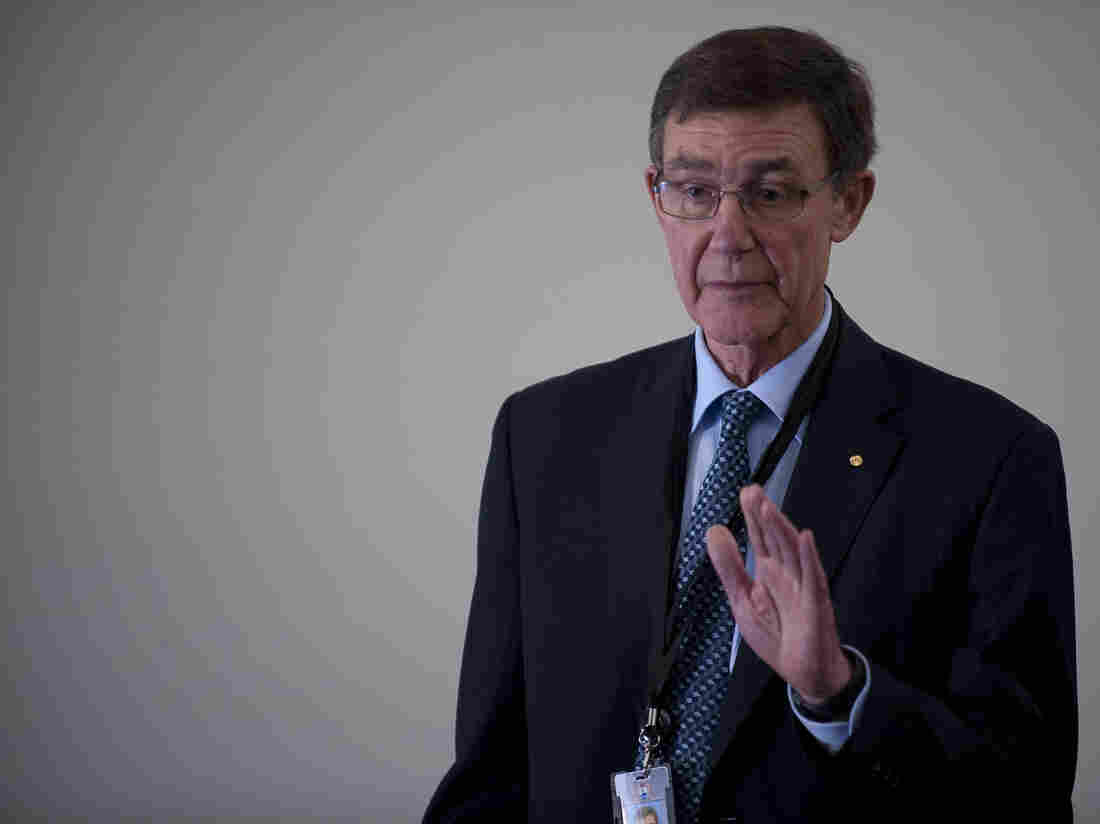 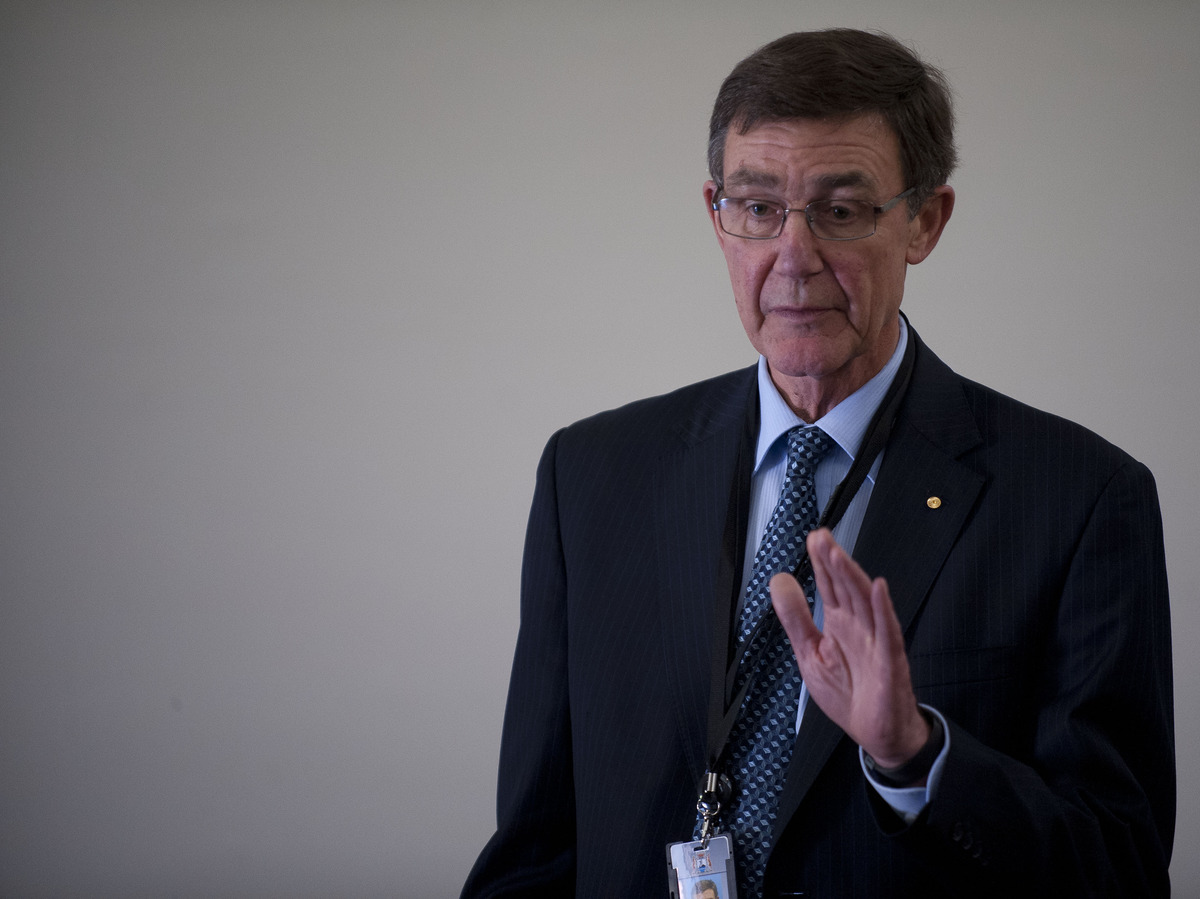 "The head of the search for Malaysia Airlines Flight MH370 has raised the possibility that no wreckage from the passenger jet may ever be found, revealing authorities have a very poor understanding about how fast or far it traveled," The Sydney Morning Herald writes.

Retired Air Chief Marshal Angus Houston, the former head of Australia's defense forces who now leads the multinational effort to find the jet and any sign of the 239 people who were on board when it disappeared March 8, reminded reporters Tuesday that "we don't know what altitude the aircraft was traveling at. We don't really know the speed it was going."

Malaysia Airlines Flight 370 disappeared in the early hours of March 8, local time, which was midday March 7 on the East Coast of the U.S. Bound for Beijing from Kuala Lumpur with 239 passengers and crew, it was over the Gulf of Thailand between Malaysia and Vietnam when the last message from the cockpit to air traffic controllers was heard.

Investigators believe the plane then turned sharply to the west, flew back over the Malay Peninsula and headed south over the Indian Ocean. It may have been in the air for six or seven more hours. Theories about what happened vary widely, from some sort of catastrophe on board that disabled the crew to a hijacking.

The search is now concentrated on an area about 1,100 miles west of Perth, Australia. Aircraft and ships from Australia, New Zealand, Japan, China, South Korea, Malaysia and the U.S. are among those taking part in the operation.

Analysis of radar images and some communications data have focused the search on an area of the southern Indian Ocean about 1,100 miles west of Perth, Australia. But that zone is about the size of the state of New Mexico and it's not certain that's where the jet ended up.

According to the Morning Herald, Houston compared the search to that for the HMAS Sydney, a Royal Australian Navy cruiser that sank off the coast of Western Australia during a battle in November 1941. "There were eyewitnesses who saw the ship disappear over the horizon, but it took us about 60 years to find HMAS Sydney on the bottom of the ocean," Houston said.

He called the search for Flight 370 "the most challenging ever," the BBC adds.

In other news, Malaysian authorities on Tuesday released a transcript of what they say were the exchanges between the plane's cockpit and air traffic controllers before the jet disappeared less than an hour after taking off from Kuala Lumpur on what was supposed to be a six-hour flight to Beijing. They've posted images of the transcript in two parts, here and here.

The final words from the cockpit, as we reported on Monday, are now said to have been "good night, Malaysian three seven zero." Until Monday, authorities had said the final words were "all right, good night." Some analysts say "good night, Malaysian three seven zero" sounds more like words that would be routinely spoken by a pilot than the slightly less formal "all right, good night."

Much of our coverage of the missing flight is collected here. 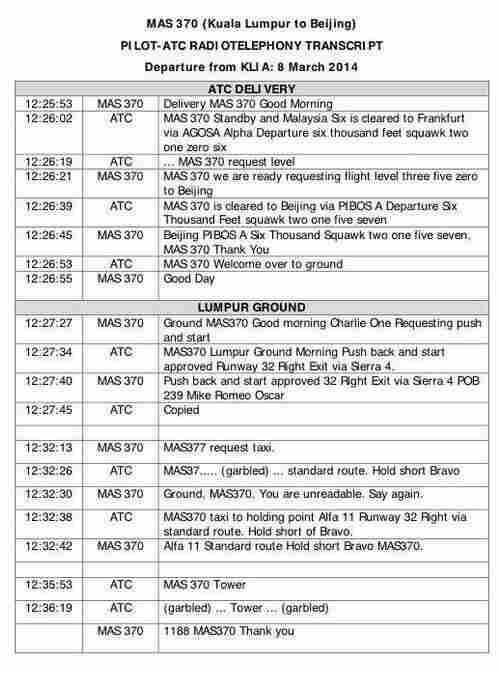 Part I of the transcript Malaysian authorities have released of the conversations between the pilots of Malaysia Airlines Flight 370 and air traffic controllers. Acting Malaysian Transport Minister Hishammuddin Hussein hide caption 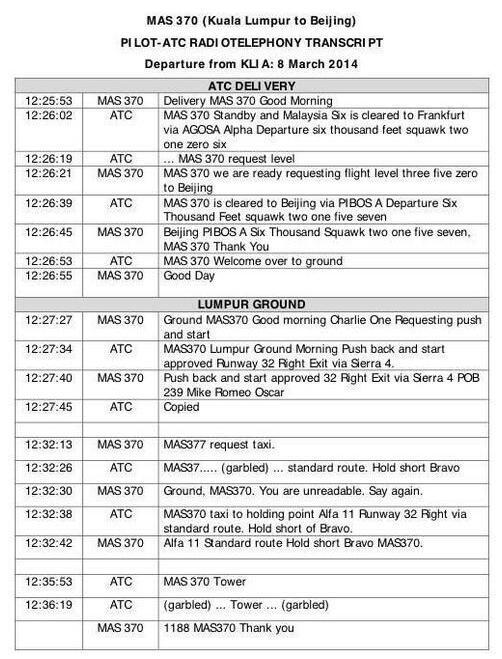 Part I of the transcript Malaysian authorities have released of the conversations between the pilots of Malaysia Airlines Flight 370 and air traffic controllers. 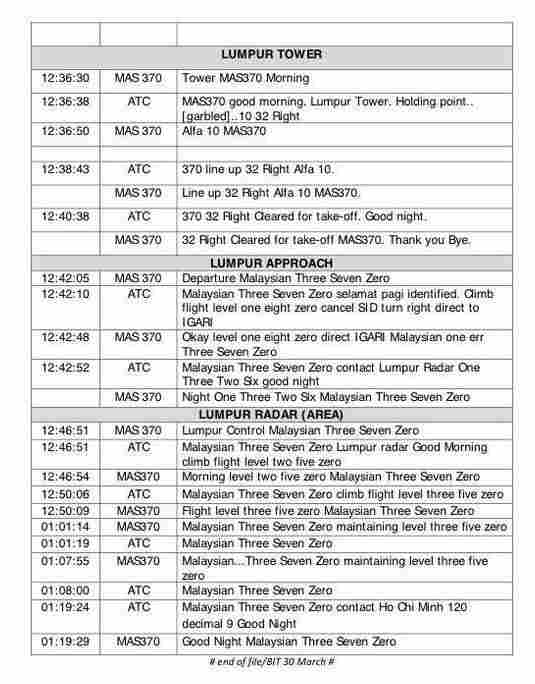 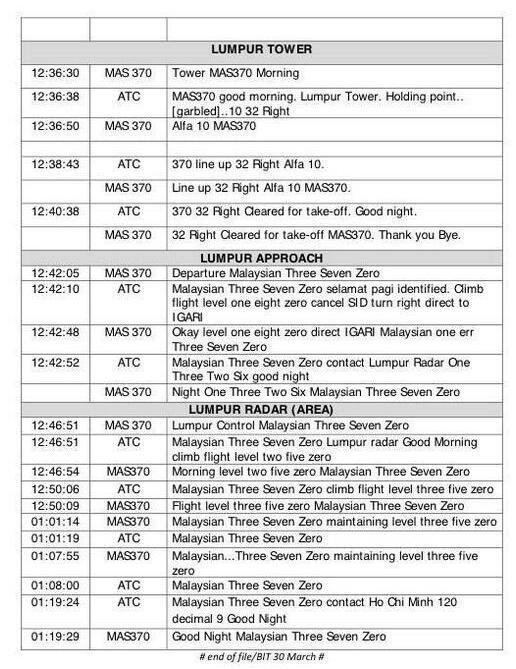 Part II of the transcript Malaysian authorities have released of the conversations between the pilots of Malaysia Airlines Flight 370 and air traffic controllers.