Accessibility links
Shooting At Fort Hood Leaves 4 Dead, 16 Injured : The Two-Way The suspected shooter at the Texas Army post is Ivan Lopez, a Pentagon official tells NPR. Authorities say he was being evaluated for PTSD and treated for depression. 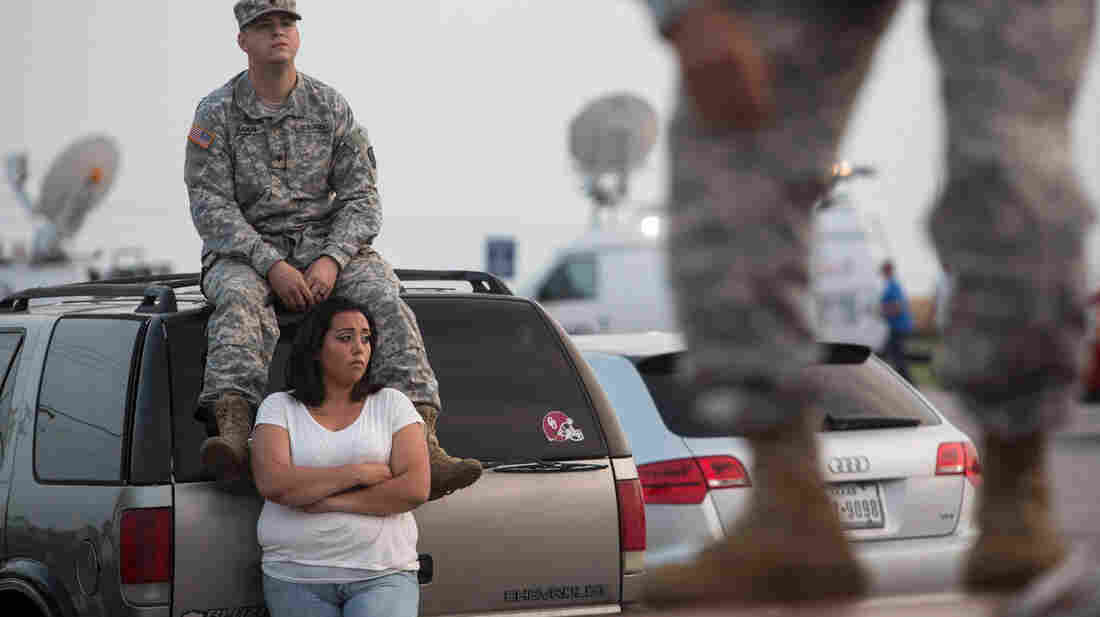 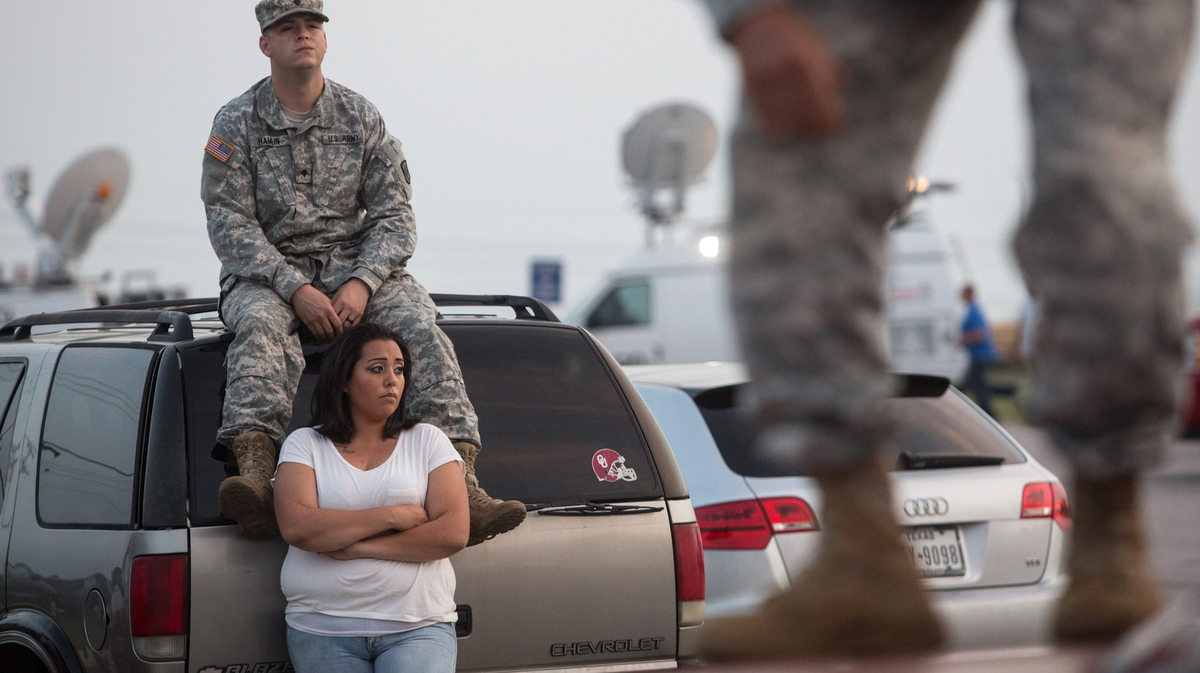 Lucy Hamlin and her husband, Spc. Timothy Hamlin, wait for permission to re-enter the Fort Hood military post, following a shooting there Wednesday.

A gunman opened fire on the military post of Fort Hood, Texas, on Wednesday, killing three and injuring 16, before putting the gun to his head and killing himself, Lt. Gen. Mark A. Milley said at a televised news conference.

Without confirming the name, Milley said the man had mental health issues and was being treated for depression and evaluated for post-traumatic stress disorder. The man, Milley said, served four months in Iraq in 2011, but did not receive a Purple Heart, indicating he was not injured in battle.

Milley said authorities don't think this attack is linked to terrorism, but they are not discarding any theory. A motive, Milley added, is under investigation.

According to the lieutenant general, the gunman came on the post carrying a semi-automatic .45 caliber pistol. He opened fire on one building and then got into a car, where he fired more shots. He got off, entered another building and shot again.

Eventually, a military police officer engaged him in a parking lot and that's where he shot himself in the head, Milley said.

Talking to pool reporters in Chicago earlier in the day, President Obama said he was monitoring the situation.

"We're heartbroken something like this might have happened again," Obama said. The president added that this incident brought back memories of the 2009 shooting that left 13 dead on the post. He said that, today, the sense of safety that soldiers should have at home has been broken.

"I want to just assure all of us, we are going to get to the bottom of exactly what happened," he said.

Shortly after reports of a shooting, the 1st Cavalry Division tweeted that personnel "should shelter in place immediately, close doors and stay away from windows."

Eyewitnesses told local news stations they saw a stream of emergency vehicles make their way onto the post. One witness said he saw police escort service members and civilians from buildings with their hands in the air.

Secretary of Defense Chuck Hagel said during a brief statement from Hawaii that this was clearly "a terrible tragedy."

All of the dead and all of the injured were military.

Fort Hood was the scene of a mass shooting in 2009, where 13 people were killed and more than 30 were wounded. The Associated Press reports it was "the deadliest attack on a domestic military installation in history."

This is a breaking news story. We'll update once we know more. And as we always tell you when stories such as this are developing, information may come in that later turns out to have been incorrect. We'll do our best to sort through what's out there and reliable and update as needed.

He served for four months in Iraq in 2011, but did not receive a Purple Heart, indicating he was not injured in battle.

The suspect was under evaluation for post-traumatic stress disorder, but had not been diagnosed, Milley said.

The man is married and had transferred to Fort Hood from another military facility in Texas in February.

Milley said he would not confirm the suspect's name, because his family had not yet been notified.

While we await a press conference from Fort Hood, we'll point you to this USA Today story that gives you the Fort Hood basics.

USA Today reports it opened in 1942 as Camp Hood "as the U.S. military kicked into high gear for World War II."

It's worth noting that in 2010 a report that followed the 2009 shooting rampage said the military needed to be better at identifying "insider threats." USA Today reports:

"It recommended that the Defense Department update training and education and coordinate with the FBI, which has studied behavioral traits that might provide an early warning of potential violence.

"The report also recommended that the Defense Department develop procedures to better share information among agencies so commanders would know of any adverse information in an individual's past."

"Today, Ft. Hood was once again stricken by tragedy. As Texans, our first priority must be caring for the victims and their families. Ft. Hood has proven its resilience before, and will again. Texas will support those efforts in any way we can, with any resources necessary. The thoughts and prayers of all Texans are with everyone affected by this tragedy."

Update at 9:25 p.m. ET. Suspected Shooter Thought To Be Dead:

McCaul said authorities had not yet established a motive.

Glen Couchman, chief medical officer for Scott & White Memorial hospital, said four patients had already arrived at the hospital and two more are on the way.

He said their conditions vary from stable to "quite critical."

Couchman said they are seeing gunshot wounds to the extremities, chest and neck.

Secretary of Defense Chuck Hagel said during a brief statement from Hawaii that Fort Hood remains locked down.

He said he did not have any new information, but that it was clear this was "a terrible tragedy."

We're expecting a press conference from Fort Hood at any moment.

Obama talked to pool reporters in Chicago. He stood in front of large black curtain with an American flag.

"We're following it closely," Obama said. "The situation is fluid right now ... I want to just assure all of us we are going to get to the bottom of exactly what happened."

NPR's Tom Bowman tells us a U.S. official tells him one person is dead and 14 are wounded.

NPR's Tamara Keith tells us President Obama will make a statement about the situation in Fort Hood to the pool "shortly."

Update at 7:34 p.m. ET. Injured Personnel Are Being Transported:

In an updated statement, Fort Hood says injured personnel are being transported to local hospitals.

The statement adds that the base's "Directorate of Emergency Services has an initial report that a shooter is dead but this is unconfirmed."

There have been reports of the number injured, but Fort Hood did not give a specific number. KCEN-TV reports that the police activity coming in and out of the post has calmed down a bit.

In a statement, the White House said President Obama has been informed of the situation in Fort Hood.

"He'll continue to receive updates on the situation throughout the evening," spokesman Josh Earnest said.

The Associated Press reports the Bell's County Sheriff's Office, which is responding with deputies and troopers, says there are reports of an "active shooter."

A soldier on the base tells KCEN-TV that police seem to be clearing buildings, escorting civilians and service men and women out with their hands in the air.

"There has been a shooting at Fort Hood and injuries are reported. Emergency crews are on the scene. No further details are known at this time."

During its live broadcast, KCEN-TV showed police vehicles streaming into the post. An eyewitness told the station that a helicopter was flying over the post and he had counted tens of ambulances and police vehicles as well as a SWAT team.