Accessibility links
Ooops! US Airways Accidentally Includes Lewd Photo In Tweet : The Two-Way Airlines commonly use Twitter to address the concerns of customers. When US Airways did that Monday, its response included a graphic picture of a naked woman. 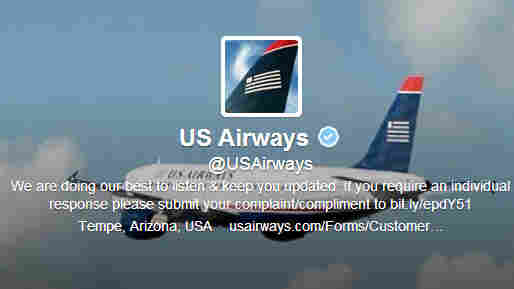 Airlines commonly use Twitter to address the concerns of customers, answering questions about flights and policies and helping passengers deal with delays. But US Airways ran into trouble online Monday, when its response to an unhappy customer included a link to a graphic photo of a woman with a model airplane.

"We apologize for an inappropriate image recently shared as a link in one of our responses," the airline tweeted this afternoon. "We've removed the tweet and are investigating."

It's very possible that the image's inclusion was entirely an accident. But that raises the question: How would someone have a link to such a uniquely inappropriate picture in the first place?

USAirways says in a statement released today, "We captured the tweet to flag it as inappropriate. Unfortunately the image was inadvertently included in a response to a customer."

As you might expect, the tweet, and the photo, live on. A brouhaha has erupted online, with other Twitter users posting comments and jokes about the misstep. The photo is also inspiring a flurry of Photoshopped images.

The accidental tweet was part of US Airways' response to a woman named Elle who complained about a late arrival in Portland, and the service at the airport. She asked, "Is this the sort of service that I should expect now that you merged with AA and are part of #OneWorld? If so, no thanks!!"

US Airways responded: "We welcome feedback, Elle. If your travel is complete, you can detail it here for review and follow-up:" — but instead of pasting in a link to a customer service form, the airline pasted the graphic image below its message.

Reactions to the mistweeted photo have included some zingers at the airline's expense. Others sympathized with social media workers at US Airways.

Right now CNN is on the phone with @USAirways. "I heard you found a plane?"

"The hell with you, Pulitzer Prize committee", the @USAirways social media intern yelled, "I'll show YOU how to dominate the news cycle."

No matter what you do for a living, you will never have a day worse than what US Airways Social Media/PR team is probably having.

My virgin eyes! As a brand account manager, that @USAirways tweet is basically my worst nightmare. #socialmedia

And a few people have also noted that Elle's Twitter stream includes several complaints directed at other companies and organizations, from restaurants (Red Robin and Panera Bread) to UPS and the Oregon Department of Transportation.