Accessibility links
In Ukraine: Reports Of Soldiers Switching To Pro-Russia Side : The Two-Way As the government tries to assert control in the eastern part of the nation, there's word that some Ukrainian troops may now be on the side of locals who wish to join Russia.

Listen
In Ukraine: Reports Of Soldiers Switching To Pro-Russia Side

In Ukraine: Reports Of Soldiers Switching To Pro-Russia Side 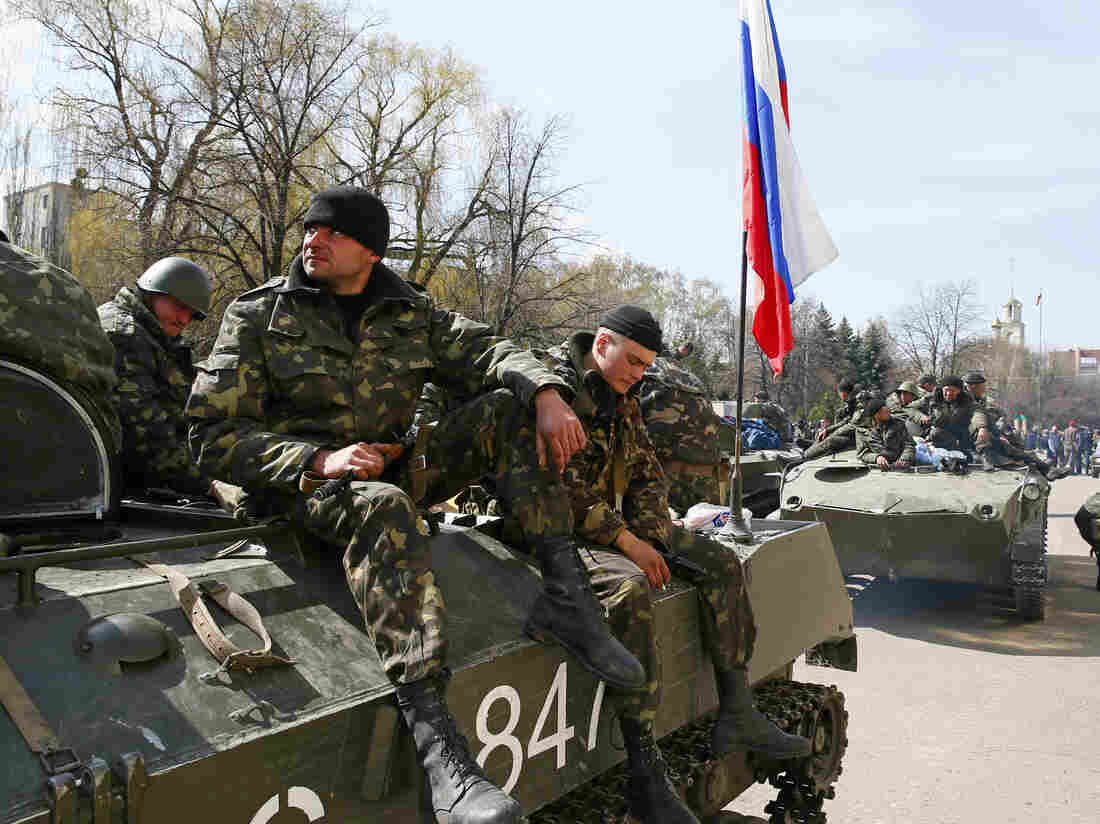 Men sit on an armored personnel carrier in Slovyansk, Ukraine, on Wednesday. A Russian flag flies from it. When some Ukrainian forces approached the city, locals say, they were persuaded to hand over their vehicles to pro-Russia protesters. Gleb Garanich/Reuters/Landov hide caption 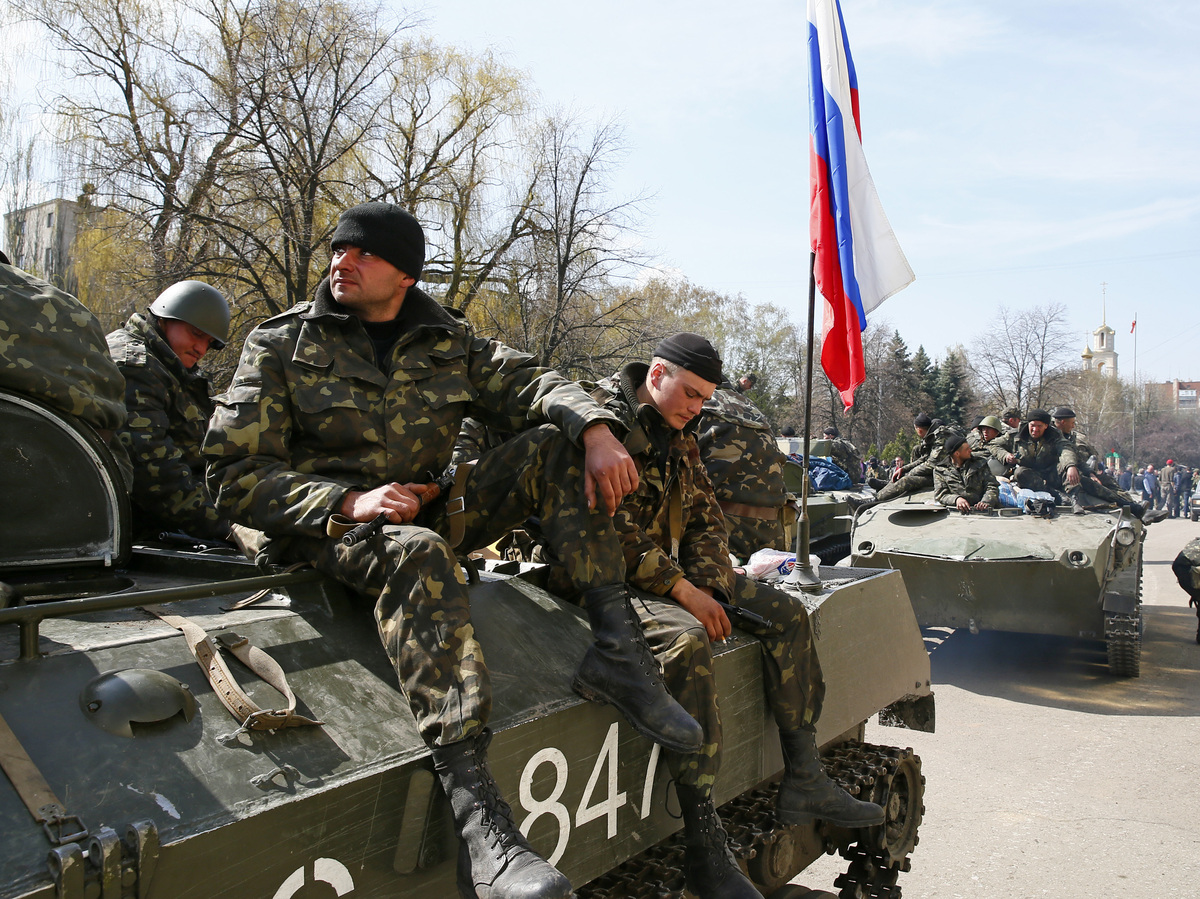 Men sit on an armored personnel carrier in Slovyansk, Ukraine, on Wednesday. A Russian flag flies from it. When some Ukrainian forces approached the city, locals say, they were persuaded to hand over their vehicles to pro-Russia protesters.

Confusion continues to reign in eastern Ukraine, where pro-Russia gunmen remain in control of many government offices even as the Ukrainian military sends in troops, tanks and armed aircraft in an attempt to dislodge them.

According to NPR's Ari Shapiro, who is in eastern Ukraine, locals who are pushing to separate from the central government and join the Russian Federation claim that at least some Ukrainian troops are refusing to move against them.

In the city of Slovyansk, Ari reported on Morning Edition, protesters say Ukrainian military personnel carriers approached Wednesday with soldiers who were looking "bedraggled, tired and dirty." Protesters say that after the soldiers were given food and water and had a "nice conversation" with residents, Russian flags were raised on the vehicles and they went "rolling off to Slovyansk."

"A soldier guarding one of six troop carriers now under the control of pro-Russian separatists told Reuters he was a member of Ukraine's 25th paratrooper division from Dnipropetrovsk. 'All the soldiers and the officers are here. We are all boys who won't shoot our own people,' said the soldier, whose uniform did not have any identifying markings on it. 'They haven't fed us for three days on our base. They're feeding us here. Who do you think we are going to fight for?' he said."

In the city of Kramatorsk, though, there are "no Russian flags to be seen," Ari reported. It was there, as we noted Tuesday, that Ukrainian troops regained control of the local airfield. "A couple people were wounded" during a brief clash with pro-Russia gunmen, Ari said, "but we're told that nobody was killed."

Still, the BBC writes that while "Ukrainian troops have entered the eastern town of Kramatorsk ... they were blocked by civilians and the situation is unclear, amid reports that some may have abandoned their vehicles or even changed sides."

Ukraine's acting defense minister, Mykhailo Koval, is reportedly going to Kramatorsk. He will attempt to send a message, Ari said, that the central government is still in control of the region. But most of the locals he has met in eastern Ukraine, Ari added, "emphatically agree" with the protesters who want to join the Russian Federation.

As we've written before, there are fears about what may happen if there are clashes between Ukrainian forces and the demonstrators in a part of Ukraine where many residents are ethnic Russians.

The White House on Wednesday said it was appropriate for Ukraine to take action to restore order. Press secretary Jay Carney told reporters on Air Force One that so far Kiev had responded with "admirable restraint" to the unrest.

The Associated Press has noted that "Russia has warned the Kiev government against using force against the protesters in the east and has threatened to cancel an international diplomatic conference on the Ukrainian conflict scheduled for later this week." There are reportedly tens of thousands of Russian troops just across the border. Russia says they were conducting military exercises.

Meanwhile, NATO Secretary General Anders Fogh Rasmussen says the western alliance is strengthening its forces in the region, a move aimed at "deterrence and deescalation" in the face of Russia's aggressive posture. Specifically, Rasmussen said NATO warships would be dispatched to the Baltic Sea, where the alliance's air policing aircraft would also fly more sorties. Further deployments could come in the eastern Mediterranean or elsewhere as needed, he said, according to the AP.

Last month, Russian forces moved into what was the Ukrainian-controlled Crimean Peninsula. Since then, Russia has annexed Crimea — an act that Ukraine, the U.S. and many other nations have deemed a violation of international law.