Accessibility links
Ukraine Crisis: Russia Endorses Call For Protesters To Disarm : The Two-Way Before foreign ministers gathered in Geneva, the prospect for progress on reducing tensions appeared to be be slim. But afterward, Secretary of State John Kerry said differences had been narrowed. 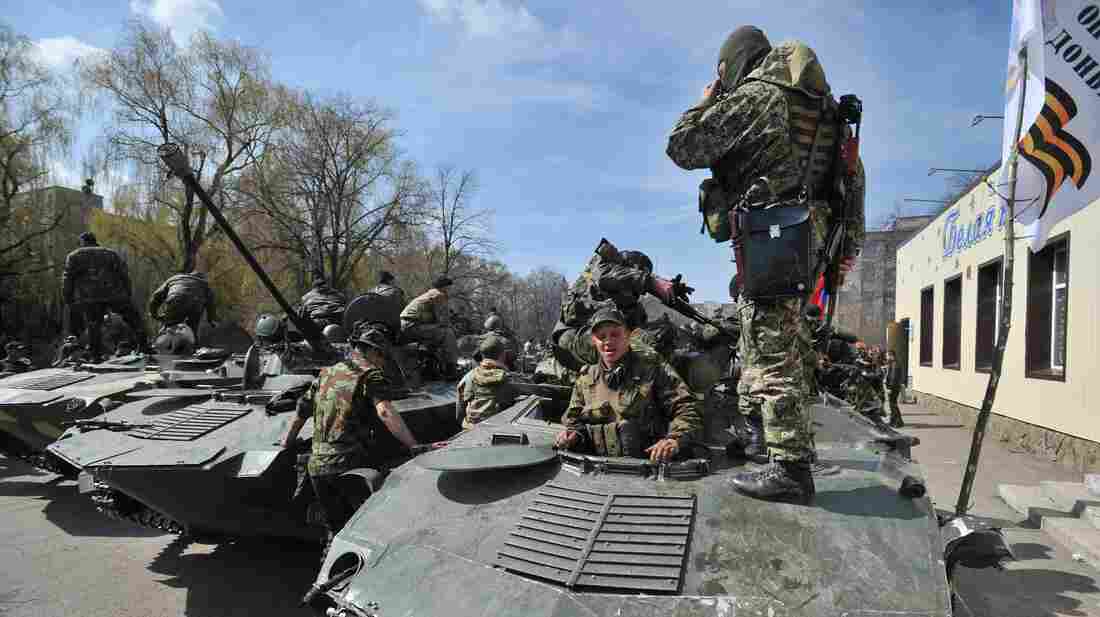 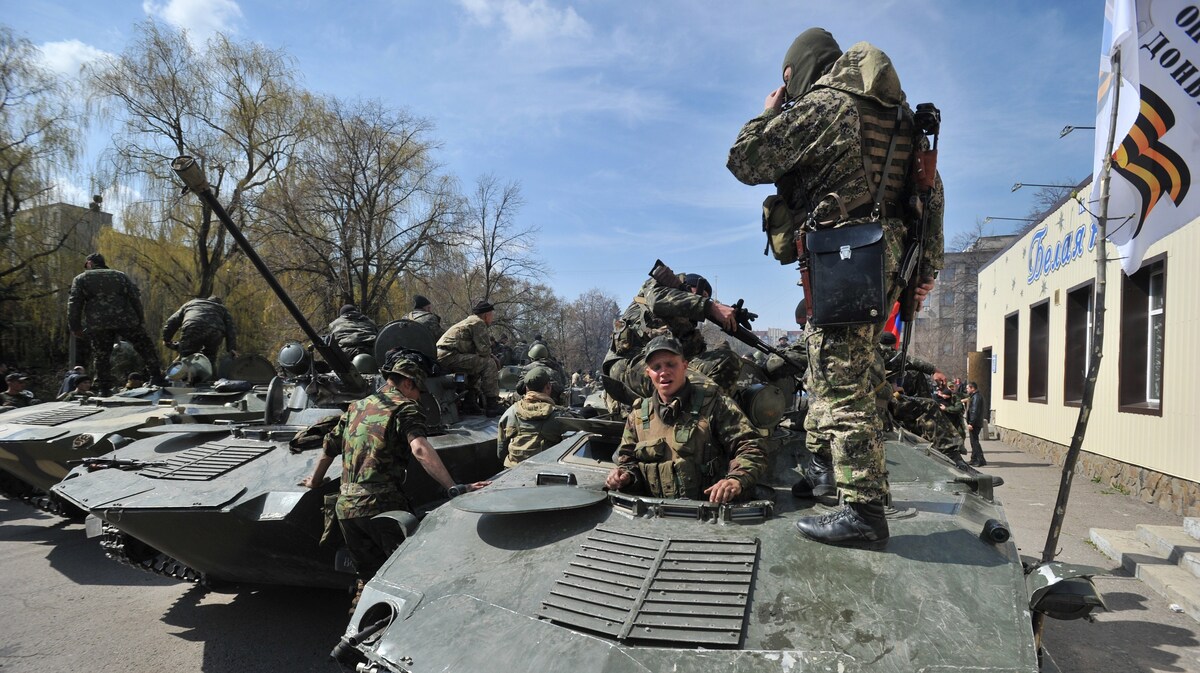 Armed men wearing military fatigues gathered on armored personnel carriers Wednesday in the eastern Ukrainian city of Slovyansk, where they and other pro-Russia gunmen took control of some key locations.

Diplomats from the U.S., Ukraine, Russia and the European Union emerged Thursday from a meeting that wasn't expected to accomplish much saying they had made progress toward resolving the crisis in Ukraine.

"We worked hard and we worked in good faith in order to narrow our real differences," Secretary of State John Kerry said following the meeting in Geneva. He and Russian Foreign Minister Sergei Lavrov announced that the four parties at the negotiating table agreed:

-- That all "illegal armed groups" in Ukraine must immediately lay down their weapons.

-- That all "illegally seized buildings" in eastern Ukraine must immediately be returned to that nation's authorities.

-- That all protesters in eastern Ukraine, who have been pushing to join the Russian Federation, will be granted amnesty by the Ukrainian government unless they are judged to be guilty of capital offenses.

The shifting, and often conflicting, news about the crisis in Ukraine comes through in the headlines on the homepage of The New York Times at 1:40 p.m. ET on Thursday: While one reads \\\"Diplomatic Pact Commits Russia and Ukraine to Ease Tensions,\\\" the other says \\\"Putin Asserts Right to Use Force in Eastern Ukraine.\\\"

In addition, monitors from the Organization for Security and Cooperation in Europe will be allowed to assist Ukrainian authorities and local communities in "the immediately implementation of these deescalation measures," Kerry said.

The U.S. secretary said he expects Russia will now follow through and put pressure on the pro-Russia protesters in Ukraine to put down their weapons.

As we said, before the meeting there wasn't an expectation that the four parties would reach any consensus on a way forward.

President Obama, in a White House briefing on Thursday, expressed some skepticism over the deal. He said he was hopeful that Russia's overtures were sincere, but that "I don't think, given past performance, that we can count on that."

"I don't think we can be sure of anything at this point," he said. "I think there's the possibility, the prospect" of agreement, but it was too soon to say for sure, he added.

The president said he was discussing with U.S. allies new sanctions that could be imposed if there is no progress in the Ukraine situation.

He also reiterated that "military options are not on the table in Ukraine."

"There is not a clear military situation there," he said.

Our original post — Ukraine Crisis: Diplomats Meet, Putin Admits Russia's Role In Crimea — has background on the crisis and more about what had been expected to happen in Geneva:

As U.S. Secretary of State John Kerry and foreign ministers from Ukraine, Russia and the European Union were gathering Thursday in Geneva to see if they can find a diplomatic solution to the crisis in Ukraine, Russian President Vladimir Putin was publicly acknowledging for the first time that his military played a part in Crimea's breakaway from the rest of Ukraine.

Putin, who in the past had insisted Russian forces did not enter Crimea before people in that region voted last month to join the Russian Federation, said Thursday on Russian national TV that "Crimean self-defense forces were of course backed by Russian servicemen," Russia's RT.com reports.

RT.com writes that Putin "acknowledged that Russian troops were present in Crimea before the referendum and argued that was necessary to let Crimeans make the choice on the future of the region."

Also Thursday, "Putin accused Ukraine's leaders ... of committing a 'grave crime' by using the army to quell unrest in the east of the country, and did not rule out sending in Russian troops," Reuters reports. But, the wire service adds:

"Putin tempered withering criticism of the Ukrainian leadership with more conciliatory comments about the possibility of a compromise to resolve the worst East-West crisis since the Cold War.

"While recalling that parliament had granted him the right to use military force in Ukraine, the Kremlin chief said: 'I really hope that I do not have to exercise this right and that we are able to solve all today's pressing issues via political and diplomatic means.' "

Meanwhile, NPR's Soraya Sarhaddi Nelson reports that as Kerry and other diplomats gathered in Geneva, there was little sense that the talks would do much to ease tensions in Ukraine. She tells our Newscast Desk that:

"Kerry and his European counterparts at the Geneva meeting are telling Russia to stop stoking separatist actions in eastern Ukraine and are demanding the Kremlin pull Russian troops back from the border with Ukraine.

"Russia, on the other hand, wants the U.S. to stop its 'reckless' backing of the new government in Kiev and is demanding a new Ukrainian constitution that lessens the Ukrainian government's control of the country."

The New York Times says Kerry was asked Thursday whether he expects any progress at the talks. It writes that:

"Mr. Kerry shrugged, lifting his hands. The gesture appeared to capture the wary mood about the chances that an accommodation between Ukraine and Russia could be achieved at the four-way meeting."

As for the situation in eastern Ukraine, The Associated Press writes that:

"Ukraine's military launched its first actions against the pro-Russian forces on Tuesday. A day later, in the eastern Ukraine city of Slovyansk, pro-Russian insurgents took over six Ukrainian armored vehicles along with their crews and hoisted Russian flags over them before driving into town. The Ukrainian soldiers manning the vehicles offered no armed resistance, and masked pro-Russian militias in combat fatigues rode on top of the vehicles in a defiant rejection of Kiev's hope to re-establish control over the restive region.

"Insurgents in Slovyansk have seized the police headquarters and the administration building, demanding broader autonomy for eastern Ukraine and closer ties with Russia. Their actions have been repeated in at least eight other cities in eastern Ukraine. The central government says Moscow is provoking the unrest.

"On Thursday, Ukraine's interior minister said three pro-Russian militants died and 13 were wounded when Ukrainian troops repelled an attack on a National Guard base in Mariupol."