Accessibility links
America's Meb Keflezighi Wins An Emotional Boston Marathon : The Two-Way In the men's field, Keflezighi ended a 31-year drought for U.S. runners after pulling away from Wilson Chebet of Kenya late in the race. 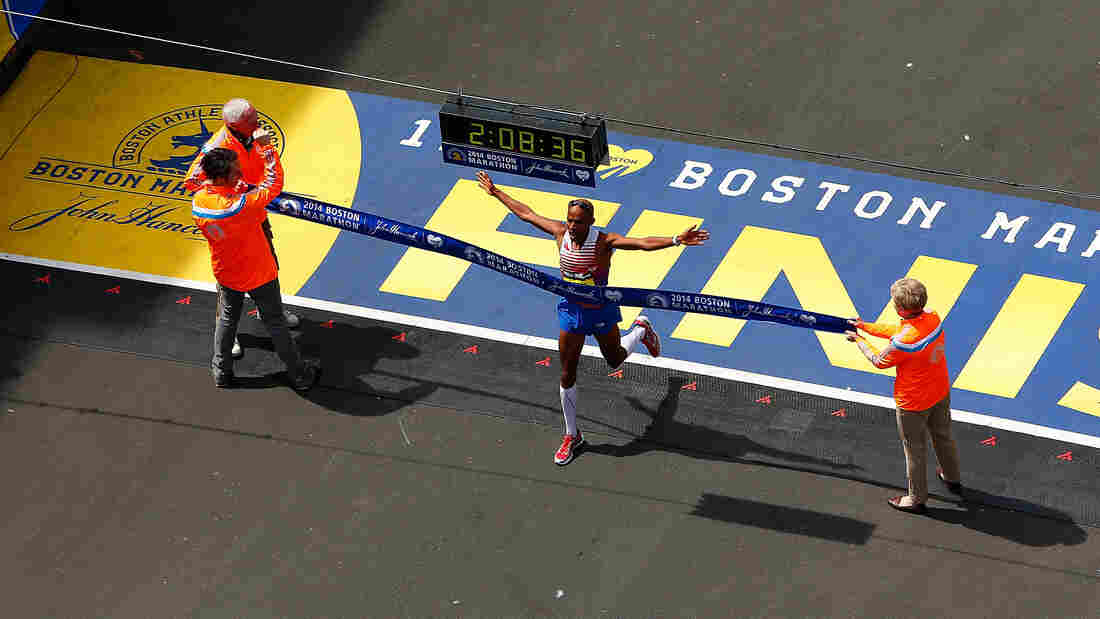 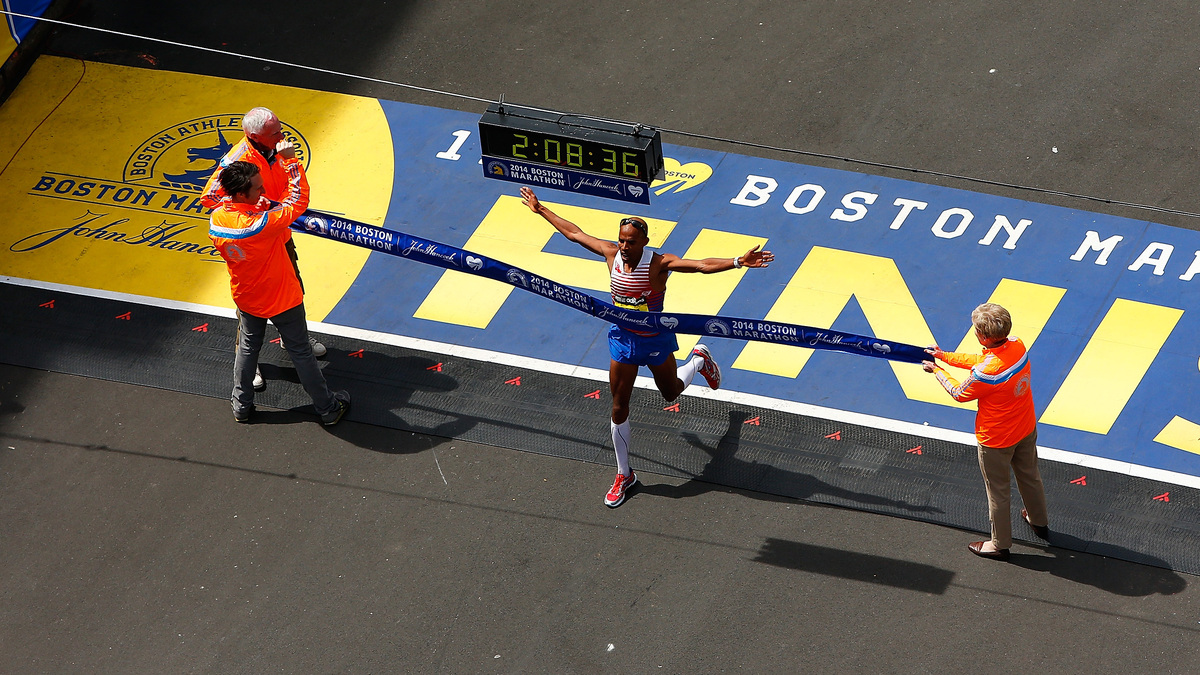 In the men's field of the 118th Boston Marathon, American Meb Keflezighi ended a 31-year drought for U.S. runners, after holding off Wilson Chebet of Kenya in a race that came down to the final mile.

According to race officials, Keflezighi, 38, ran a 4:56 split at mile 23, when he built a 20-second lead. That lead dwindled as the runners neared the finish line, but Keflezighi held off all challengers to win the race with an unofficial finishing time of 2:08:37.

The crowd roared as the Eritrean-born runner who lives in San Diego crossed the finish line, celebrating a much-needed U.S. victory in the historic race.

Before today, no American had finished first in the men's field since Gregory Meyer won in 1983. The last American woman to win was Lisa Larsen Weidenbach in 1985.

It was an emotional scene as the crowd and the runner realized that, yes, this was actually happening: a U.S. man was winning the Boston Marathon. Keflezighi broke the tape near the site of a makeshift memorial to those who died in the violence that defined last year's race.

Holding his trophy as the U.S. national anthem played, Keflezighi's face was contorted with emotion, tears streaming down his face.

"We are resilient; we never gave up," he said after the race. "My whole run is to run strong — Boston strong, Meb strong."

Keflezighi also said that he was aware he was being chased neared the finish line.

"If somebody beat me," Keflezighi recalls thinking, "I'm going to inspire others to do it."

Instead, the man whose family immigrated to the U.S. after fleeing violence in Eritrea in the 1980s has inspired others, by winning the race outright. 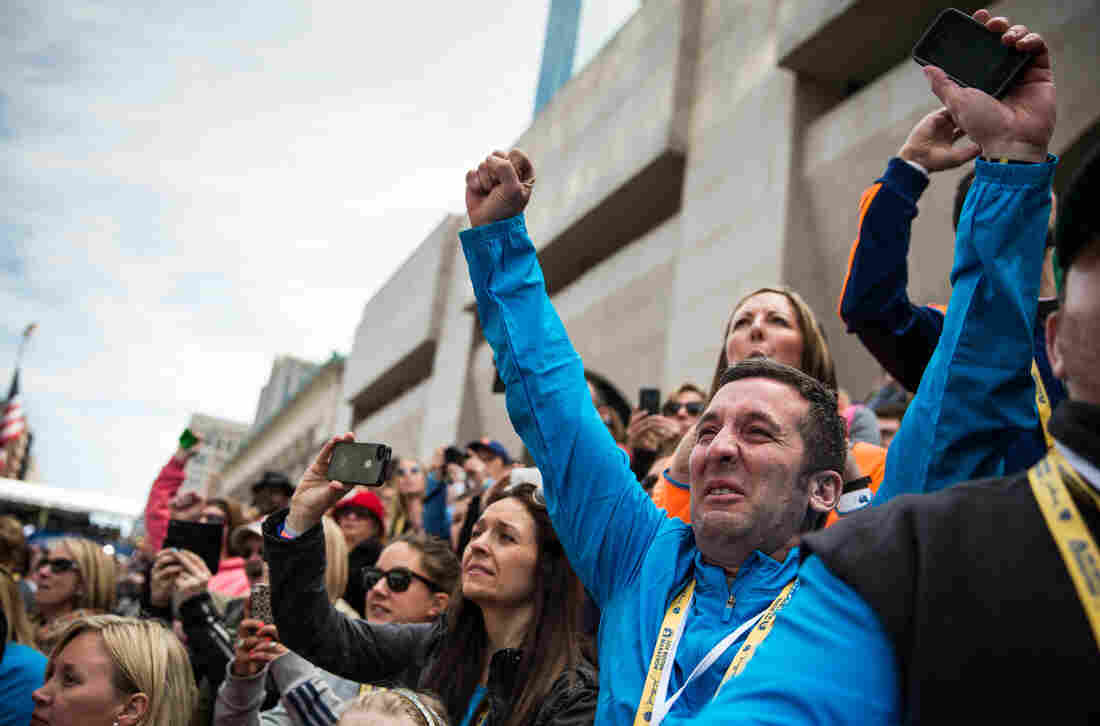 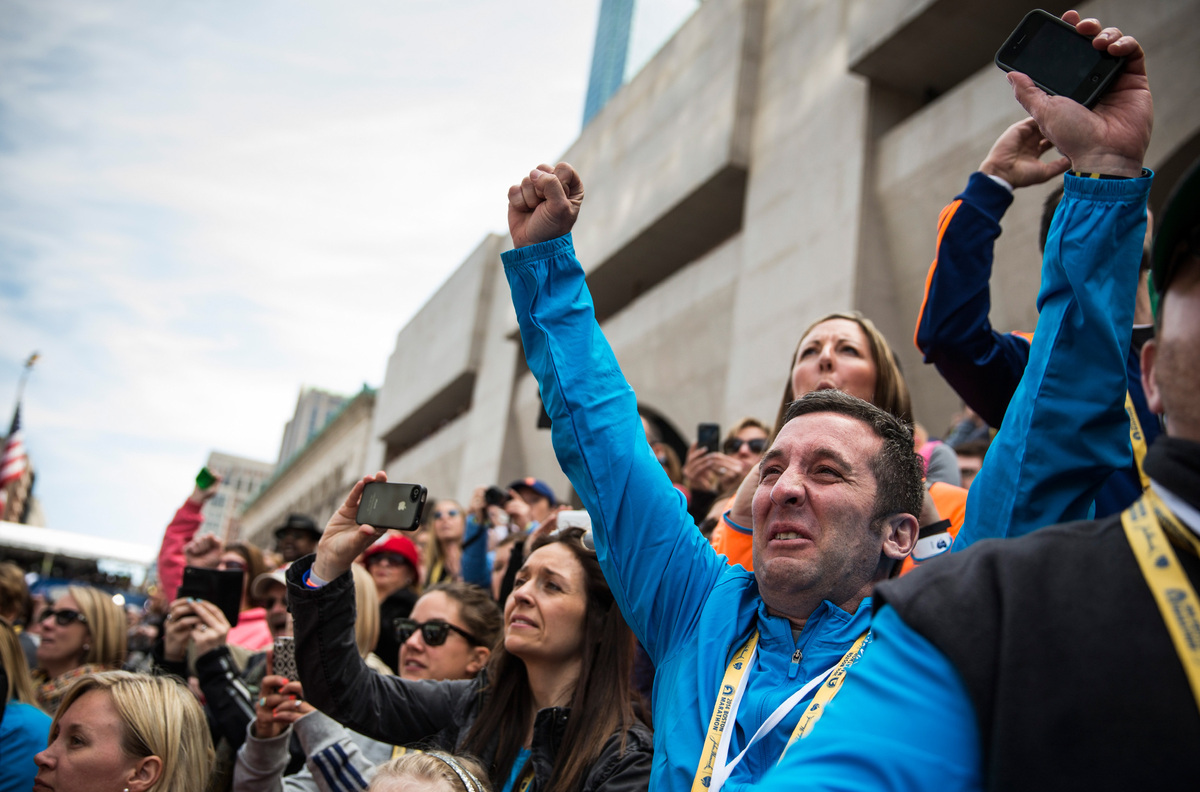 People cheer as American Meb Keflezighi wins the Boston Marathon Monday; the previous U.S. runner to win was Gregory Meyer, who won in 1983.

The women's field was won by Rita Jeptoo of Kenya, who set a course record with a time of 2:18:57 as she successfully defended her title as the Boston champion.

American Shalane Flanagan, a Massachusetts native, finished sixth in the race, posting a personal best with her time of 2:22:01. Michigan's Desiree Linden rounded out the women's top 10 with a time of 2:23:54.

For the second year in a row, Tatyana McFadden of Illinois has won the women's wheelchair race.

You can follow our live blog of the race here.

Update at 2:20 p.m. ET: Complete Top Results From The Race

The Boston Athletic Association has released lists of official times for the top finishers. In addition to Keflezighi, two Americans — Nick Arciniaga of Flagstaff, Ariz., and Jeffrey Eggleston of Boulder, Colo. — finished in under 2 hours 12 minutes to get into the top 10, at No. 7 and No. 8, respectively.

Ryan Hall, a Californian who trains in Arizona (and Ethiopia) and who has three top-five finishes in the Boston Marathon, came in with a time of 2:17:50 after falling off the leaders' pace. He finished in 20th place.

Some of the organizers' official list of results don't extend to 10 athletes; we'll add more names as they're published.