Accessibility links
Crowds Jam St. Peter's For Historic Day Of Four Popes : The Two-Way Hundreds of thousands of people filled the Vatican's massive plaza to witness the extraordinary sight of two popes — one reigning and one retired — declaring two of their predecessors as saints. 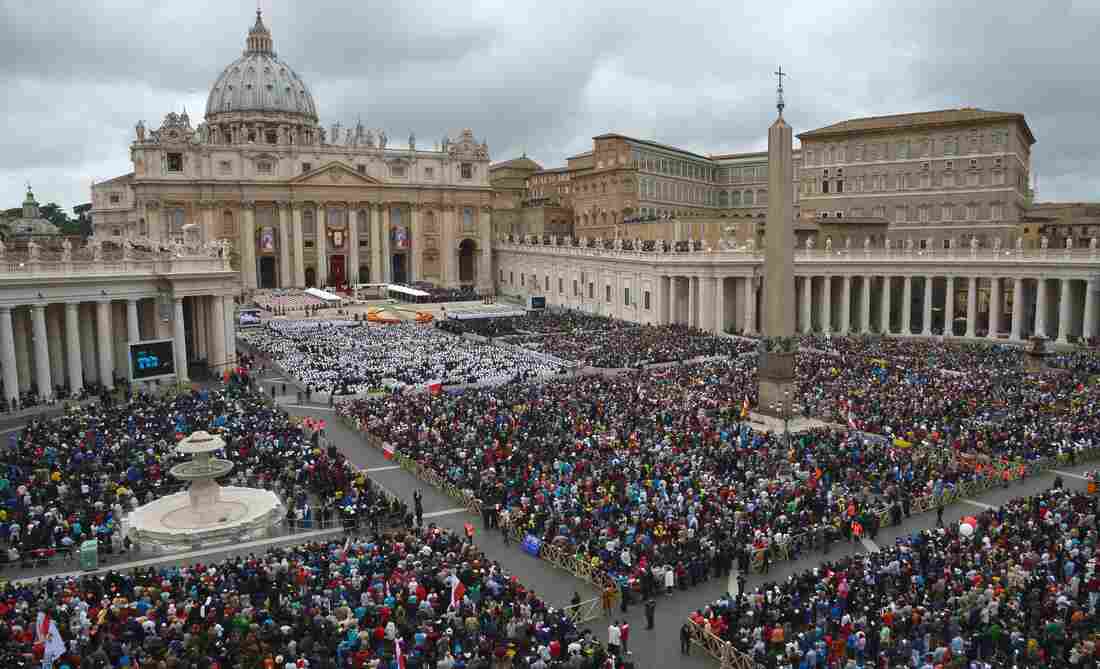 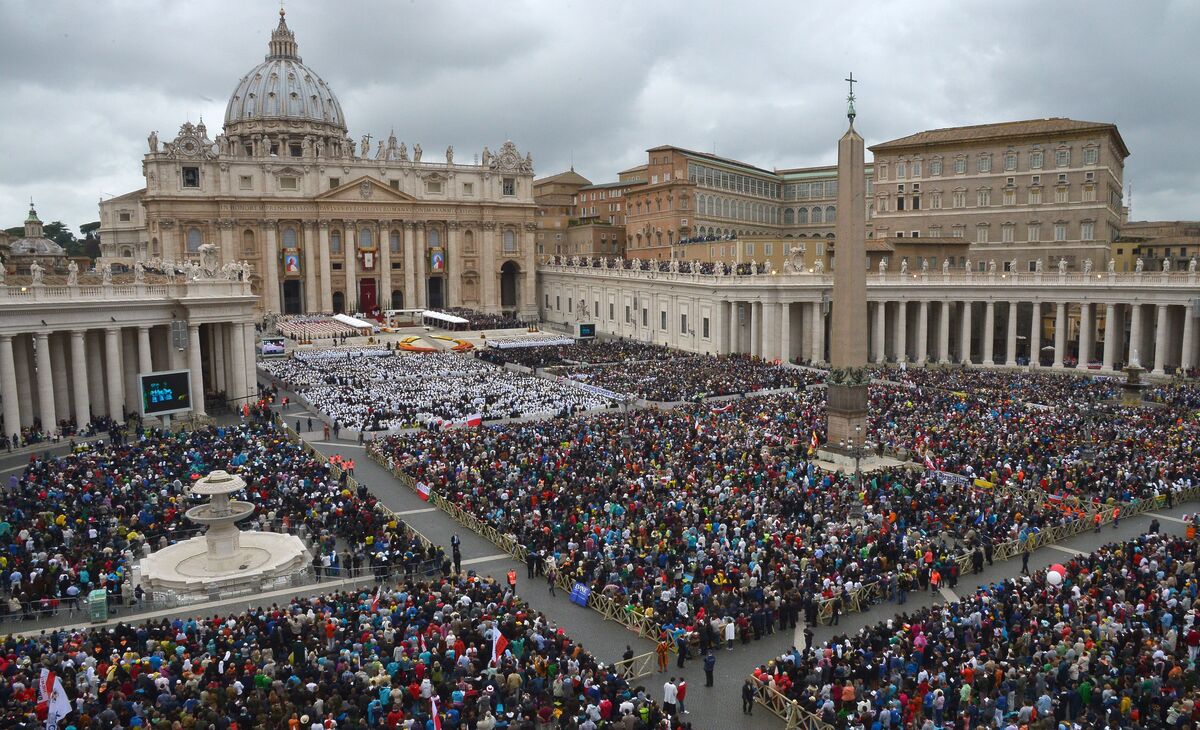 Hundreds of thousands of people filled St. Peter's Square and the streets of Rome on Sunday to witness the extraordinary sight of two popes — one reigning and one retired — declaring two of their predecessors as saints.

The ceremony was the first time two pontiffs — John XXIII and John Paul II — were made saints at the same time. The Associated Press says:

"Francis recited the saint-making formula in Latin, saying that after deliberating, consulting and praying for divine assistance 'we declare and define Blessed John XXIII and John Paul II be saints and we enroll them among the saints, decreeing that they are to be venerated as such by the whole church.' " 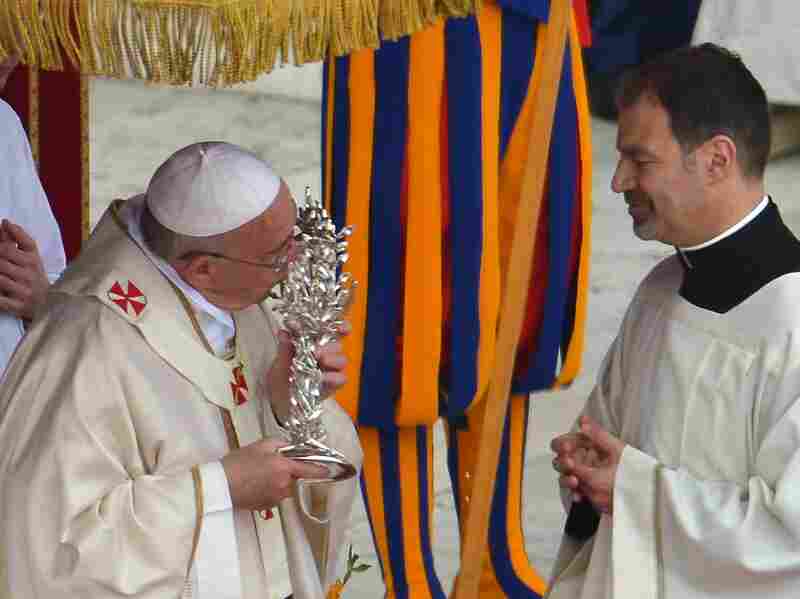 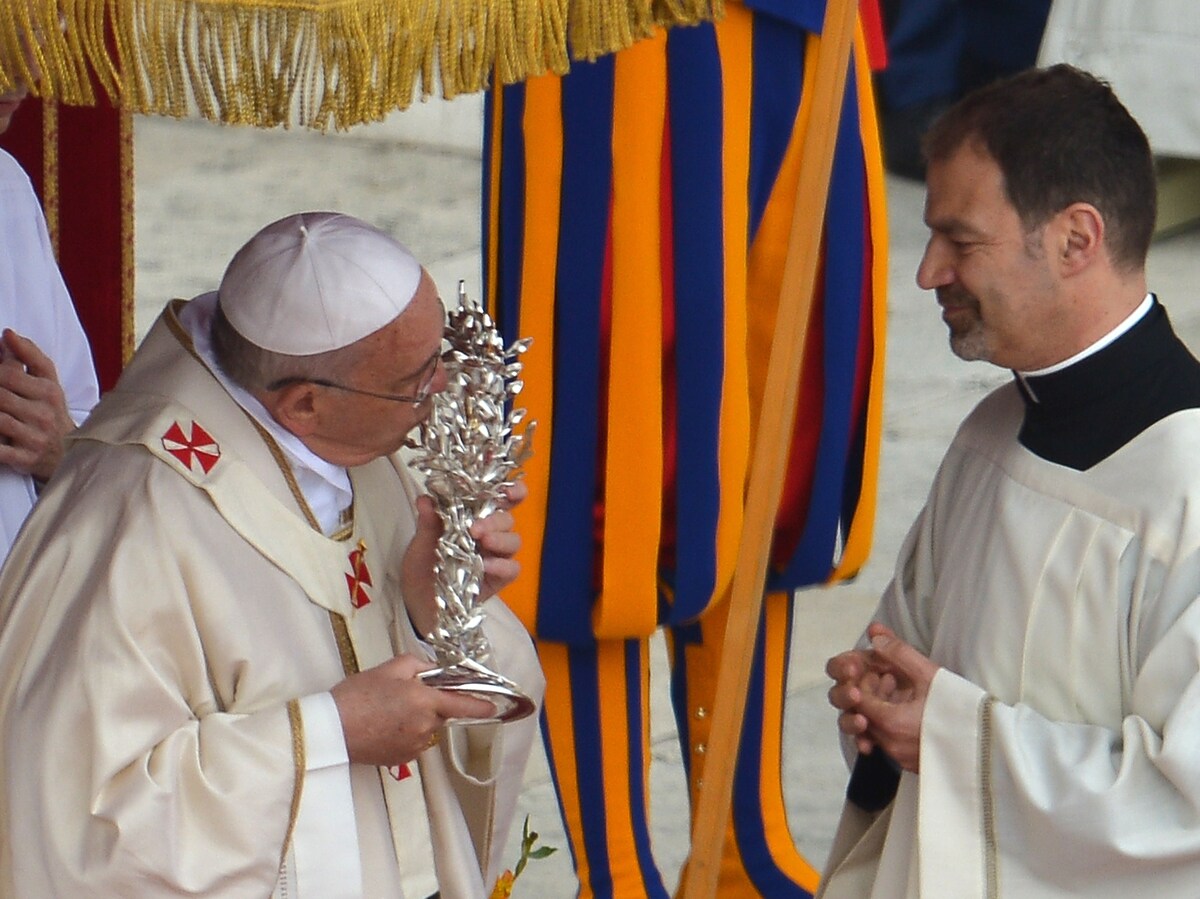 Pope Francis kisses the relic of Pope John XXIII during the canonization mass.

It was also the first time in the history of the Roman Catholic Church that a living and a former pope performed a mass together. Pope Francis was joined by emeritus Pope Benedict XVI, who retired last year.

Many of the faithful had camped in the square to claim spots for the mass. Others prayed in all-night vigils in churches in downtown Rome. Today, they celebrated under flags and banners bearing the colors of the Vatican and Poland, Pope John Paul's homeland.

"Italy's interior ministry predicted 1 million would watch the Mass from the square, the streets surrounding it and nearby piazzas where giant TV screens were set up to accommodate the crowds eager to follow along," the AP said.

John Paul, whose papacy lasted from 1978 to 2005, was a globe-trotter who was the first non-Italian pontiff in nearly 500 years and the first to visit a synagogue and a mosque. His support of Poland's Solidarity movement helped topple the country's communist government.

As NPR's Sylvia Poggioli tells our Newscast desk, "It's speculated that his experience with Poland's communist regime, that often discredited priests with false accusations may have led him to turn a blind eye for so long to clerical sex-abuse scandals that festered under his papacy, and which critics say still tarnish his legacy."

John was a hero to liberal Catholics for convening the Second Vatican Council, which allowed church-goers for the first time to hear mass in their local languages instead of in Latin.

Known as the "Good Pope" after his 1958-63 reign, John "had his promotion to full sainthood decided suddenly and very recently by Pope Francis," reported the BBC.

The Vatican defended the fast-tracking of John's canonization, telling Today.com through a spokesman that saint-making is "not exactly a democratic process."

Observers say Francis aims to unite the church with the dual canonization.

"Pope Francis' decision to canonize the pope loved by Catholic traditionalists together with the one favored by Catholic liberals is seen as part of his effort to keep Catholics united, inside one big tent," Sylvia said in her profile of the two popes on Saturday.