Accessibility links
Killer Tornadoes Rip Through Arkansas, Oklahoma : The Two-Way The most powerful of the twisters touched down north of Little Rock and tore an 80-mile path through the area. At least 14 people have died. 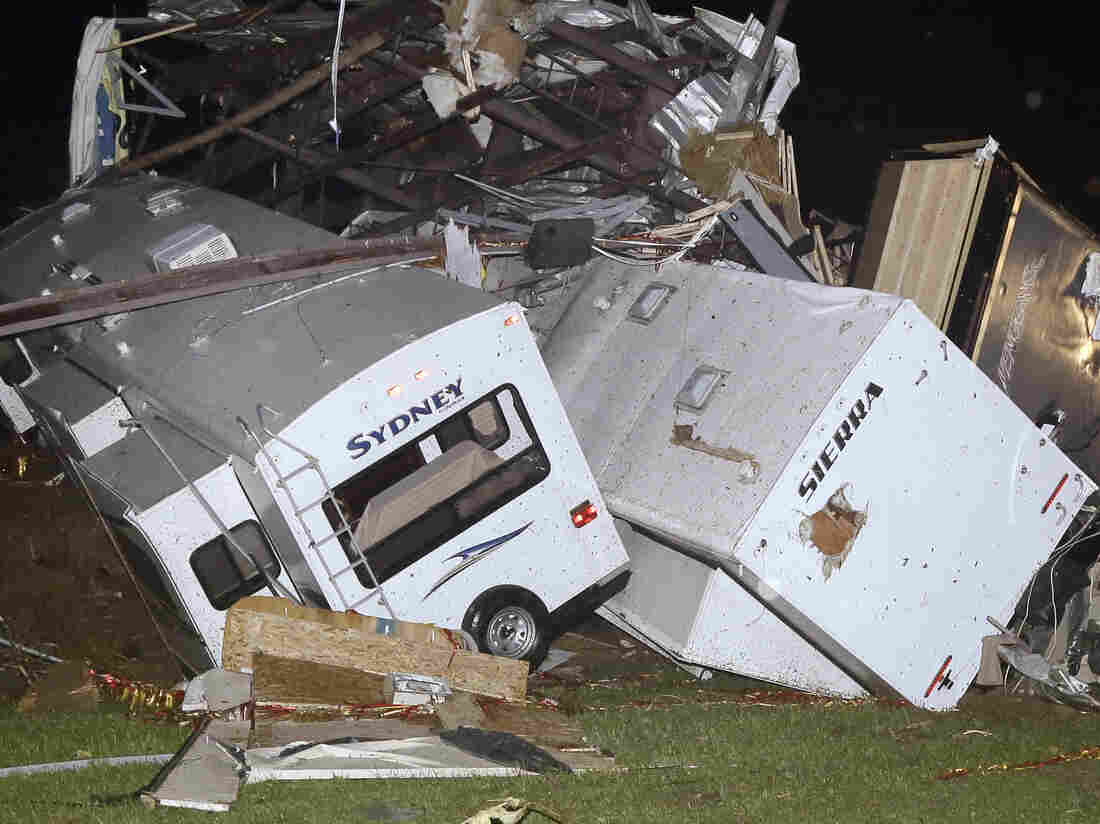 Travel trailers and motor homes were piled on top of each other at Mayflower RV in Mayflower, Ark., on Sunday after tornadoes carved through the central and southern U.S. Danny Johnston/AP hide caption 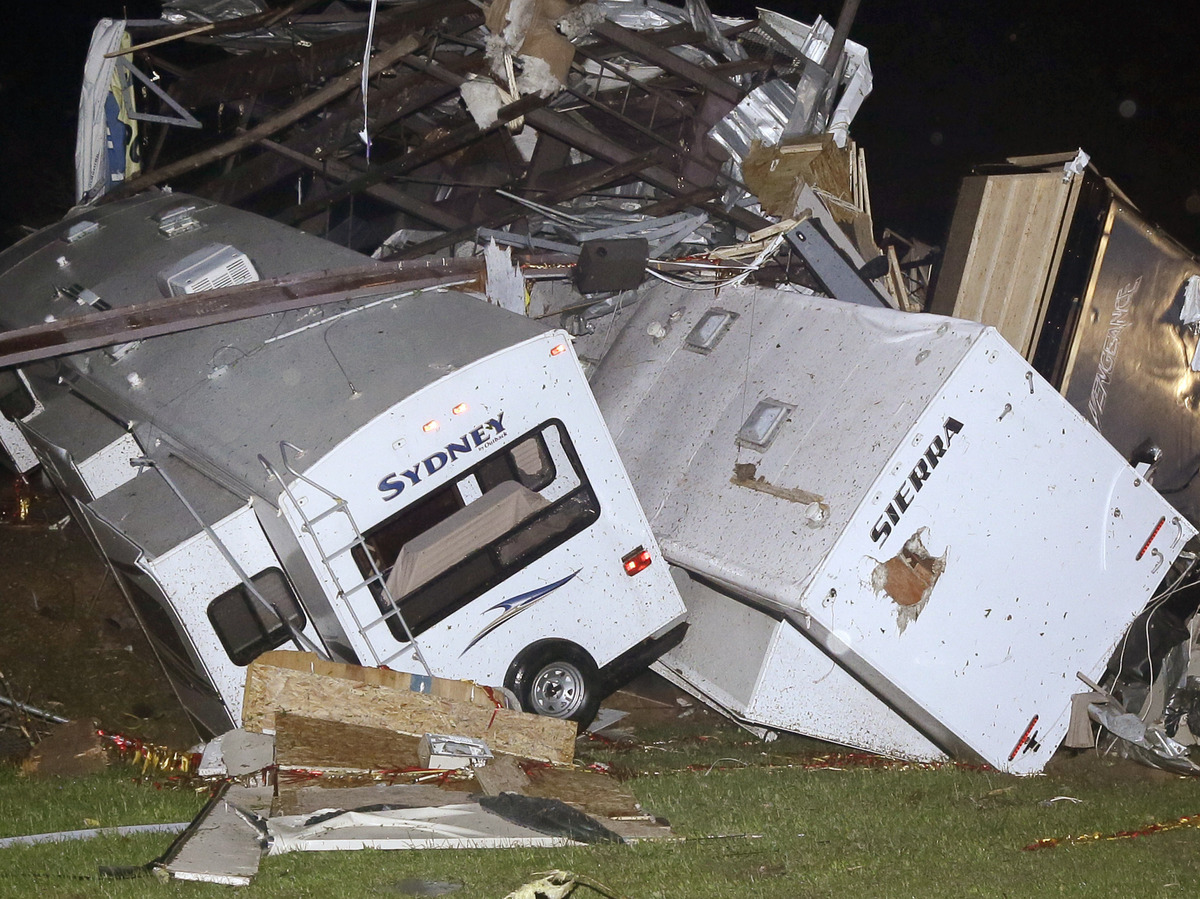 Travel trailers and motor homes were piled on top of each other at Mayflower RV in Mayflower, Ark., on Sunday after tornadoes carved through the central and southern U.S.

Emergency officials were searching Monday for survivors after tornadoes tore through parts of Arkansas and Oklahoma overnight, killing at least 14 people and leveling entire neighborhoods.

"We don't have a count on injuries or missing. We're trying to get a handle on the missing part," Arkansas Gov. Mike Beebe said at a news conference Monday. "Just looking at the damage, this may be one of the strongest we have seen."

Brandon Morris, a spokesman for the Arkansas Department of Emergency Management, said crews were looking for survivors and were assessing the damage.

"Right now, the main focus is life safety," he said. "We're trying to make sure everyone is accounted for."

Meanwhile, the National Weather Service warned of more tornadoes, high winds and hail on Monday in parts of Alabama, Louisiana, Mississippi and Tennessee.

An earlier toll of 16 was revised downward to 14; officials said two victims were counted twice. Still, an aide to Beebe said the overall death toll was likely to rise.

Tornadoes tore through parts of Arkansas and Oklahoma overnight, killing at least 17 people and leveling neighborhoods.

The largest of the twisters — estimated to be an EF3, with wind gusts up to 160 mph or greater on the Enhanced Fujita Scale — touched down Sunday evening about 10 miles west of Little Rock, Ark. The tornado "carved an 80-mile path of destruction as it passed through or near several suburbs north of the state capital, including Vilonia," The Associated Press says. It grew to be a half-mile wide and remained on the ground for much of that route, authorities said.

At least 16 people were killed in Arkansas, authorities say.

Video from the town of Mayflower, Ark., about 22 miles northwest of Little Rock, shows significant destruction.

Another tornado touched down in Quapaw, Okla., killing one person before it crossed into Kansas, where it destroyed 60 to 70 homes and injured about 25 people in the city of Baxter Springs, according to Kansas authorities quoted by the AP. Below is a video shot by storm chasers of a tornado farther north, in Hume, Mo.

Homes and businesses were destroyed and power was knocked out in the storm-affected areas.

Michael Hibblen, a reporter with member station KUAR in Little Rock, says emergency crews were digging through the rubble of damaged homes in the area looking for survivors. The Arkansas National Guard has been called out to assist, and shelters have been opened for displaced residents, he said.

In the town of Vilonia, Phil Ellis says he took cover as the twister passed. He told local TV station KARK that when he went outside afterward, he found widespread devastation.

"Among the ruins was a new $14 million intermediate school that was set to open this fall.

" 'There's just really nothing there anymore. We're probably going to have to start all over again,' Vilonia Schools Superintendent Frank Mitchell said after surveying what was left of the building."

Vilonia was also devastated three years ago by a tornado.

Faulkner County's attorney David Hogue said at least 10 people had died in that county as homes and businesses were leveled, according to Arkansas Online. He said officials hope to find survivors but the death toll may grow.

"I wouldn't be so negative as to say that, I hope not, but it's entirely possible," Hogue told reporters in Vilonia. (Update at 10:50 a.m. ET)

Forecasters say the severe weather will continue today, with parts of Mississippi, Alabama and Tennessee at greatest risk for possible tornadoes.

President Obama, speaking during an official visit to the Philippines, offered his condolences to the devastated communities.

"Your country will be there to help you recover and rebuild, as long as it takes," he said.