Accessibility links
'Heartbreaking' Video Of Final Moments Aboard Korean Ferry : The Two-Way The cellphone footage was shot by a 17-year-old victim of the ferry disaster, recording classmates as they realize that they probably will not escape. 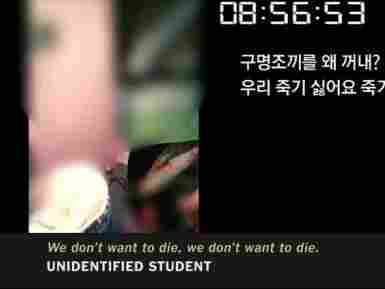 A cellphone video sent by a 17-year-old passenger in the final moments before a South Korean ferry capsized and sank on April 16, killing hundreds of people, has been released by the teenager's father.

The 15-minute video, shot by high school student Park Su-hyeon, gives a chilling glimpse of the last few minutes of the mostly teenage passengers as they begin to realize they may not escape with their lives. The video is edited and blurred to obscure the teens' faces. Park's father released the footage to to South Korean media this week.

Of the 476 people said to be on board, 323 were students from a high school in Ansan, near Seoul.

Soon after the ferry Sewol begins to list, a group of passengers are filmed talking about making selfies and posting about the experience on Facebook. A voice over the intercom urges students and teachers to remain in place, saying they're safer where they are.

"The fear in the cabin builds as the listing becomes worse. Some say they feel dizzy, that their legs are shaking. One student can be seen walking with his hands braced against the wall for balance.

" 'Am I really going to die?' a student asks at 8:53 a.m. April 16, less than two minutes into the video and two minutes before a crew member on the bridge made the ferry's first distress call."

One boy is heard saying, "This looks like the end," and another says, "Mom, Dad, I love you."

"This is by far the most heartbreaking scene I have seen in my 27-year broadcasting career," veteran television producer Choi Seung-ho said when he introduced the footage on Newstapa, a website run by the Korea Center for Investigative Journalism, according to The New York Times.

The cable channel JTBC also broadcast a shorter version of the video.