Accessibility links
Ukraine Launches Military Operation Against Separatists In The East : The Two-Way Two Ukrainian copters were shot down in the fighting, which Kiev calls an "anti-terror" operation against pro-Russia rebels. Russia says the push "killed the last hope" for a deal to ease the crisis.

Ukraine Launches Military Operation Against Separatists In The East

Ukraine Launches Military Operation Against Separatists In The East 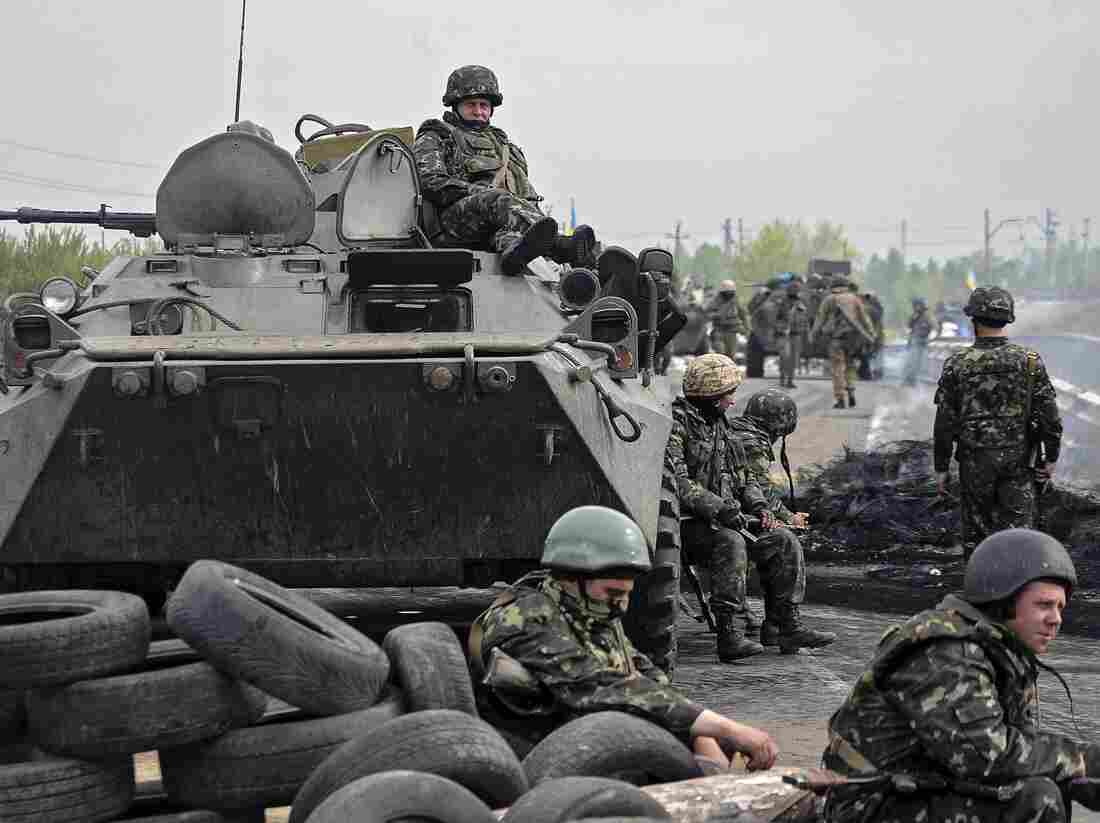 Ukrainian soldiers stay near a checkpoint they seized not far from Slovyansk, Ukraine, on Friday. Ukrainian officials say two helicopters were shot down during an "anti-terror" operation against pro-Russia separatists. Roman Pilipey/EPA/Landov hide caption 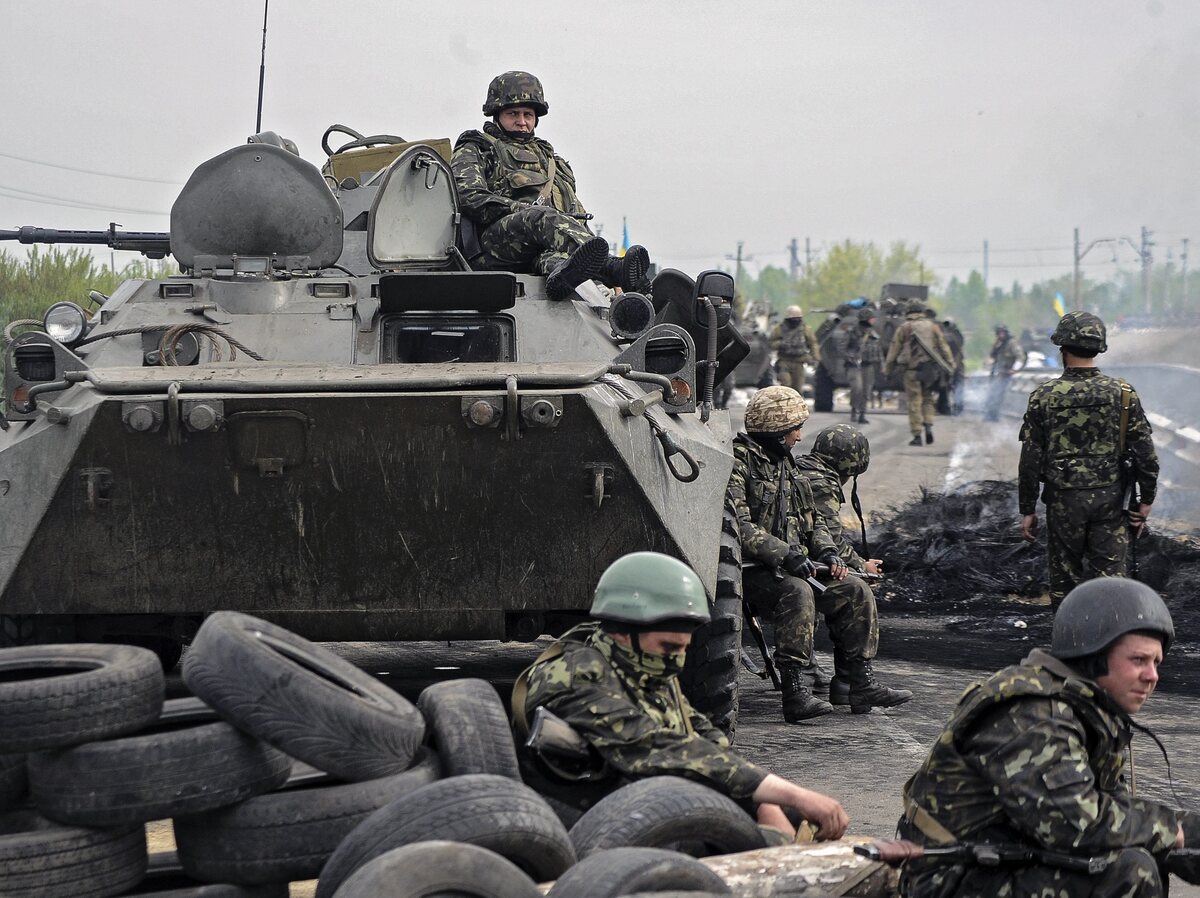 Ukrainian soldiers stay near a checkpoint they seized not far from Slovyansk, Ukraine, on Friday. Ukrainian officials say two helicopters were shot down during an "anti-terror" operation against pro-Russia separatists.

Ukrainian forces have launched what appears to be a major operation to rout pro-Russia forces from occupied government buildings in the country's east. Two helicopters were shot down by separatists, killing the pilots, both sides report.

The move is being described by Ukraine as an "anti-terror" operation in the Slovyansk-Kramatorsk region.

The Kremlin said Friday that Kiev's actions have "killed the last hope" for a deal to diffuse the crisis, which was agreed on last month in Geneva. President Vladimir Putin's spokesman Dmitry Peskov also described Ukraine's operation as "punitive," the BBC reports.

"They definitely fear this is not limited to Slovyansk," Soraya tells Morning Edition.

Ukrainian Interior Minister Arsen Avakov said in a statement that the "active phase" of the operation began at 04:30 local time.

"A real battle with professional mercenaries is going on," Avakov said, adding that Interior Ministry troops and the National Guard were involved.

Russia's state-run Rossiya 24 TV channel said the city was being "stormed," according to the BBC.

Stella Khorosheva, a spokeswoman for the pro-Russia militants, said one of their men was killed and another injured. She offered no further details, according to The Associated Press. Another spokesman for the separatists said fighting had broken out at several points around the city and that government armored vehicles were seen on roads leading into Slovyansk.

Avakov said on his Facebook page that government troops had met fierce resistance from the separatists but had succeeded in retaking nine checkpoints on roads surrounding Slovyansk.

In apparent response to the helicopter assault, the Kremlin has urged an accounting of what's happening in southeast Ukraine, where "aviation is being used against [the] population," Reuters says.

Ukraine authorities said one of the helicopters was downed by a surface-to-air missile, "which it said undercut Russia's claims that the city is under the control of civilians who took up arms," the AP reports. Soraya says a grenade launcher reportedly may have been used to take down the other helicopter.

President Obama, appearing at a joint news briefing with German Chancellor Angela Merkel, said the idea that the conflict in eastern Ukraine was a spontaneous uprising was belied by the pro-Russia militants' use of surface-to-air missiles.

He called again on Russian President Vladimir Putin to use his influence to persuade pro-Russian forces to stand down. Obama and Merkel also expressed concern about May 25 elections.

"We are united in our determination to impose costs on Russia," Obama said.

"The post-Cold War order has been put in question" by Moscow's moves, Merkel said. "We will move to a third stage of sanctions if necessary; it's not what we want, but we will," she said.

Referring to the kidnapping of seven observers of the Organization for Security and Cooperation in Europe, who are believed held in Ukraine, Obama said Washington and Berlin are "united in our outrage over [their] appalling treatment."

In an interview with Morning Edition, Gen. Philip Breedlove, NATO's supreme allied commander for Europe, acknowledges that the Kremlin has used the same tactic in eastern Ukraine that it employed in the annexation of the territory of Crimea earlier this year.

In Crimea, he says, "shadow figures" took ground and then were replaced by "locals" to hold the gains and present the appearance of an indigenous uprising.

"I think they realized how quickly we were able to see through the false narrative" in Crimea, Breedlove tells Morning Edition host Steve Inskeep. In Ukraine, he says, "they've been much quicker to put a local face on the action."

In response to the downing of the two helicopters, Breedlove says it's not clear whether Russian forces or Russian-supplied weapons were involved. "It surely is an easy step of logic to make — we have to look into that," he says.

Breedlove says what worries him more than a direct and open intervention by massed Russian troops is that by "creating this perception of lawlessness, [and] inability of the government to respond," Putin "may actually be able to accomplish his objectives in eastern Ukraine without using his larger amassed forces."