Accessibility links
Poll: Prestigious Colleges Won't Make You Happier In Life Or Work : The Two-Way A Gallup survey suggests the factors that should be guiding decisions on selecting a college are not selectivity or prestige, but cost of attendance, great teaching and deep learning — in that order. 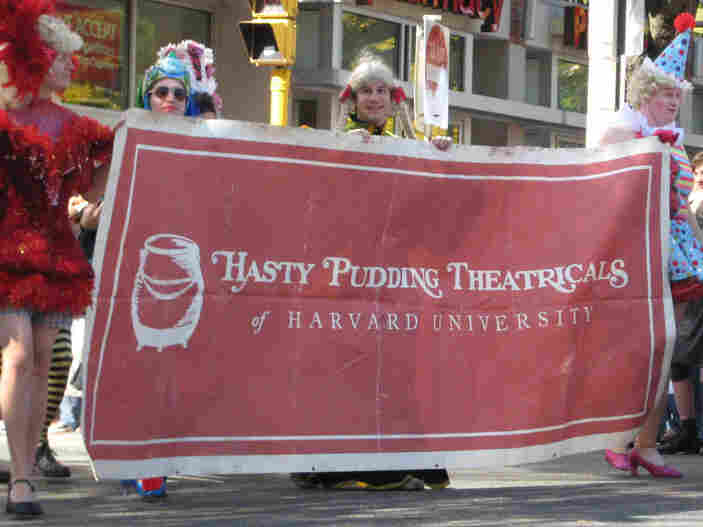 Harvard's Hasty Pudding Theatricals. According to a recent Gallup poll, only 2 percent of college graduates with $20,000 to $40,000 in undergraduate loans said they were "thriving." TPapi/Flickr hide caption 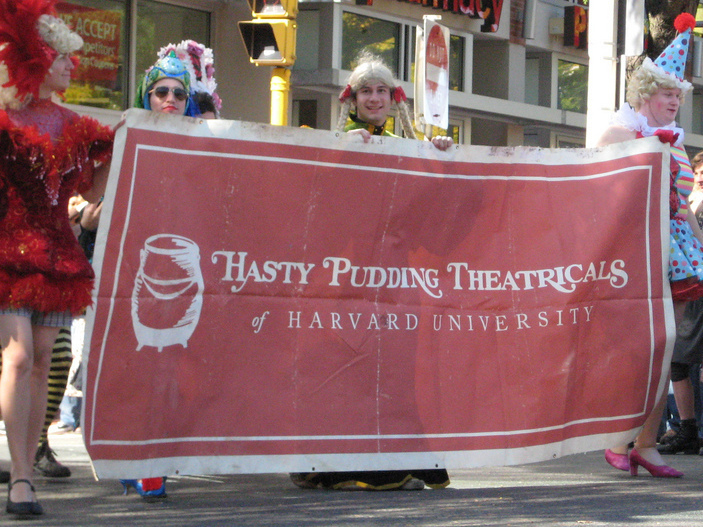 Harvard's Hasty Pudding Theatricals. According to a recent Gallup poll, only 2 percent of college graduates with $20,000 to $40,000 in undergraduate loans said they were "thriving."

There's plenty of anxiety in the U.S. over getting into a top college. But a new Gallup poll suggests that, later in life, it doesn't matter nearly as much as we think. In fact, when you ask college graduates whether they're "engaged" with their work or "thriving" in all aspects of their lives, their responses don't vary one bit whether they went to a prestigious college or not.

The surprising findings come in a survey of 29,650 college graduates of all ages by Gallup pollsters working with researchers at Purdue University. The poll asked graduates a range of questions designed to measure how well they are doing in life across factors such as income and "engagement" in their jobs and careers.

The survey set a high bar. It found that 39 percent of college grads overall say they're "engaged" at work (which is 10 points higher than the population at large). And, while almost 5 in 6 self-report doing great in at least one sphere — whether sense of purpose, financial security, physical health, close relationships or community pride — only 11 percent are "thriving" in all five areas of well-being.

And here's the kicker.

Those percentages did not vary based on whether the grads went to a fancy name-brand school or a regional state college, one of the top 100 in the U.S. News & World Report rankings or one of the bottom 100. A slight edge did go to those who attended campuses with more than 10,000 students, while for-profit college graduates saw worse outcomes.

No opinion poll can fully capture the impact — or allure — of attending a world-famous institution. But this isn't the first time studies have documented no edge for highly selective schools. Previous studies have shown no link between expensive private colleges and later salary for graduates. Income is much more closely tied to a person's choice of a major, which is a finding the Gallup survey also supported.

High-end colleges often boast that their long-term results should be judged not by looking at paychecks, but at whether their graduates live lives of meaning and deep satisfaction. "A college degree should be ... a passport to a lifetime of citizenship, opportunity, growth and change," wrote Harvard's president, Drew Gilpin Faust, in a letter to The New York Times last year.

Well, this survey asked about all that qualitative stuff — purpose, motivation to achieve goals, opportunity to learn and grow — and it didn't find any broad influence whatsoever, whether a person's diploma cost $25,000 or $250,000.

For Gallup, "well-being" and "engagement" aren't squishy. They have very specific meanings. In surveys of 25 million people over a number of years, the researchers have asked similar questions and correlated the responses across populations with income, health, employee turnover, company revenue and other "hard" indexes.

The graduate survey released Tuesday suggests the factors that should be guiding college decisions are not selectivity or prestige, but cost of attendance, great teaching and deep learning, in that order.

College debt also has a big impact, on the negative side. Only 2 percent of those with $20,000 to $40,000 in undergraduate loans reported they were "thriving." That's pretty troubling, since $29,400 is the national average for the 7 in 10 students who borrow. ­

Gallup and Purdue hope to use these and future surveys to help colleges better focus on outcomes, and to identify "outlier" colleges that are doing a great job delivering quality experiences for an affordable price.

In the meantime, the take-home message for students is clear, says Brandon Busteed, who leads Gallup's education work: "If you can go to Podunk U debt free vs. Harvard for $100,000, go to Podunk. And concentrate on what you do when you get there."