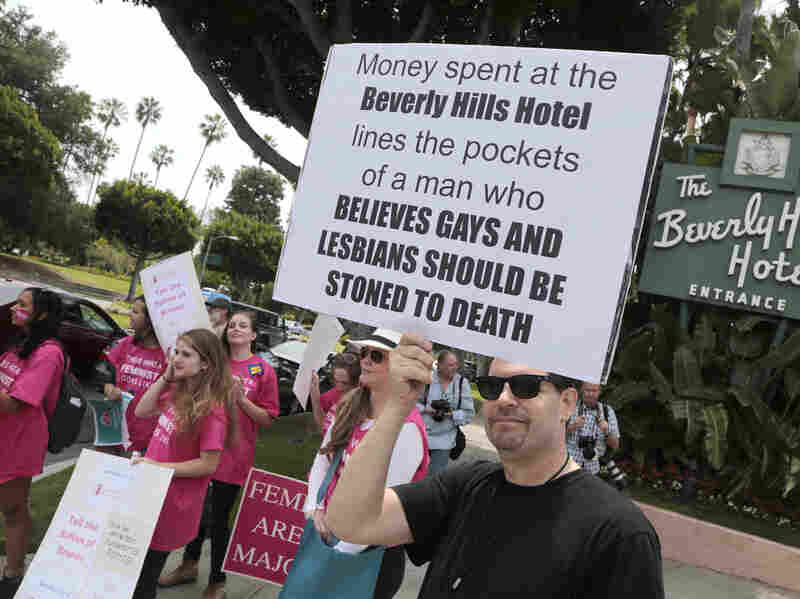 People protest outside the Beverly Hills Hotel, which is owned by the Sultan of Brunei, over the country's Shariah law penal code in Beverly Hills, Calif., on Monday. Jonathan Alcorn/Reuters /Landov hide caption 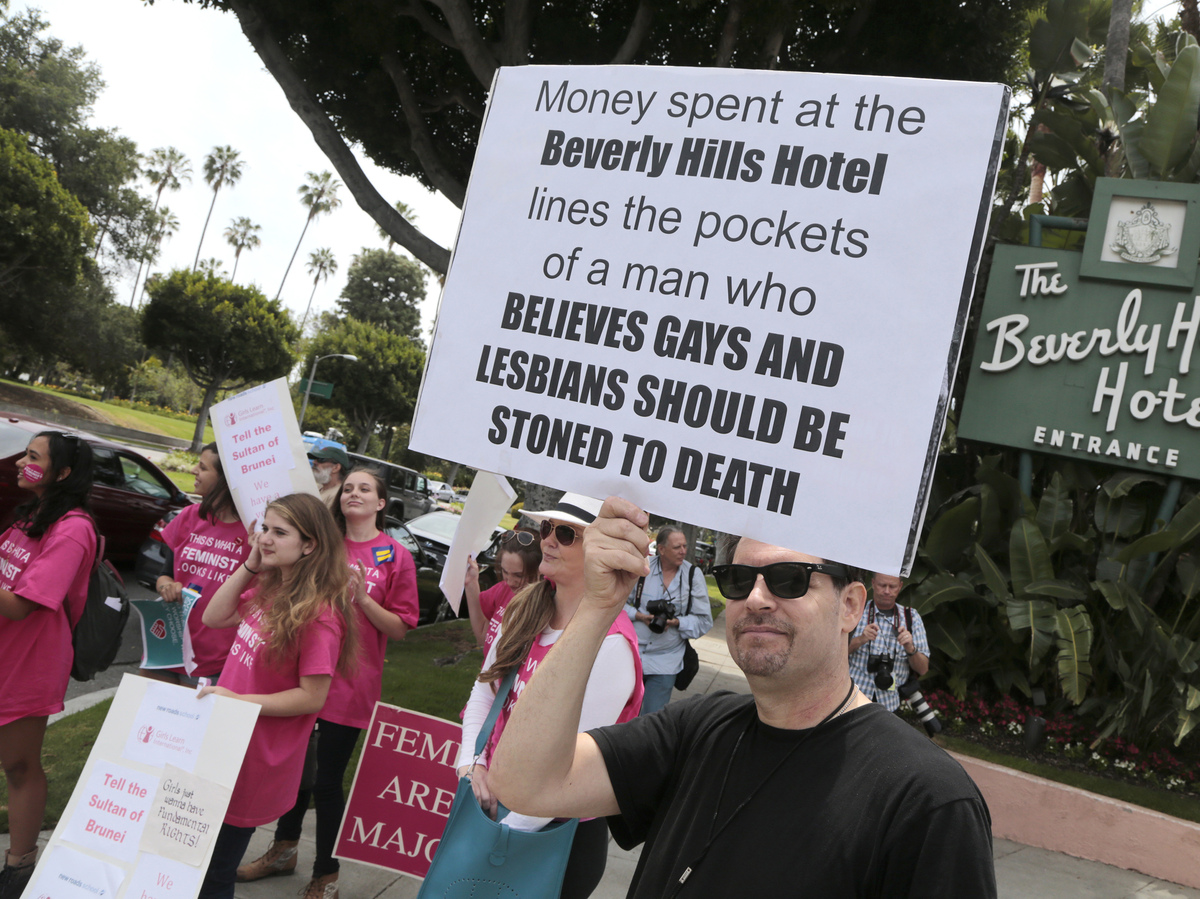 People protest outside the Beverly Hills Hotel, which is owned by the Sultan of Brunei, over the country's Shariah law penal code in Beverly Hills, Calif., on Monday.

The Beverly Hills City Council voted Tuesday night to ask the government of Brunei to divest itself of the famed Beverly Hills Hotel.

At issue: Shariah, or Islamic, law. Last week, Brunei, a tiny oil-rich kingdom in southeast Asia, adopted Shariah as part of its penal code. The law, which will be introduced in phases, makes abortion, adultery and gay relationships punishable by flogging and stoning.

Brunei owns the Beverly Hills Hotel as well as the nearby Hotel Bel-Air through the Brunei Investment Agency. Its new laws have sparked controversy and made the hotels a target of protests by celebrities, including Jay Leno and Ellen DeGeneres, who have called for boycotts. Reuters reports:

But Christopher Cowdray, the hotel group's CEO, told The Los Angeles Times: "They won't stop the implementation of the new laws" but rather would "only hurt the employees." He told the LA Times Brunei had no plans to sell the hotels.

The newspaper reports that the Beverly Hills Hotel employs about 600 people, and the Hotel Bel-Air roughly 400.

A spokeswoman for the U.S. State Department said the U.S. ambassador to Brunei "has relayed our concerns privately to the Government of Brunei."

Brunei, a former British colony, is ruled by an absolute monarch, Sultan Haji Hassanal Bolkiah, who also happens to be one of the richest men in the world. Two-thirds of the country's approximately 400,000 people are Muslim. The new laws would extend to non-Muslims as well. Here's more from Britain's Independent newspaper:

"It is unclear precisely what is motivating the Sultan, who also serves as the country's prime minister and assumed the throne in 1967. But in a speech in February to mark the country's National Day holiday, he claimed the system of an absolute Islamic monarch acted as a 'strong and effective firewall' against the challenges of globalisation. He referred specifically to the internet.

"He claimed that there were those, both in and outside Brunei, which last year chaired the Association of South-East Asian Nations (Asean), who had been challenging his plans and who wanted to see 'internal turmoil'. He added: 'These parties, it seems, have attempted to mock the king, the Islamic scholars and sharia. They are using the new media, such as blogs, WhatsApp and so on, which are not just accessed by locals but also by those overseas.' "