Accessibility links
Tonight's New 'Giraffes' Meteor Shower Could Be A Great One: How To Watch : The Two-Way Astronomers say an all-new meteor shower could put on a show for much of the U.S., starting as early as 10:30 p.m. ET Friday. The Camelopardalids shower is named after the giraffe constellation.

Tonight's New 'Giraffes' Meteor Shower Could Be A Great One

Tonight's New 'Giraffes' Meteor Shower Could Be A Great One 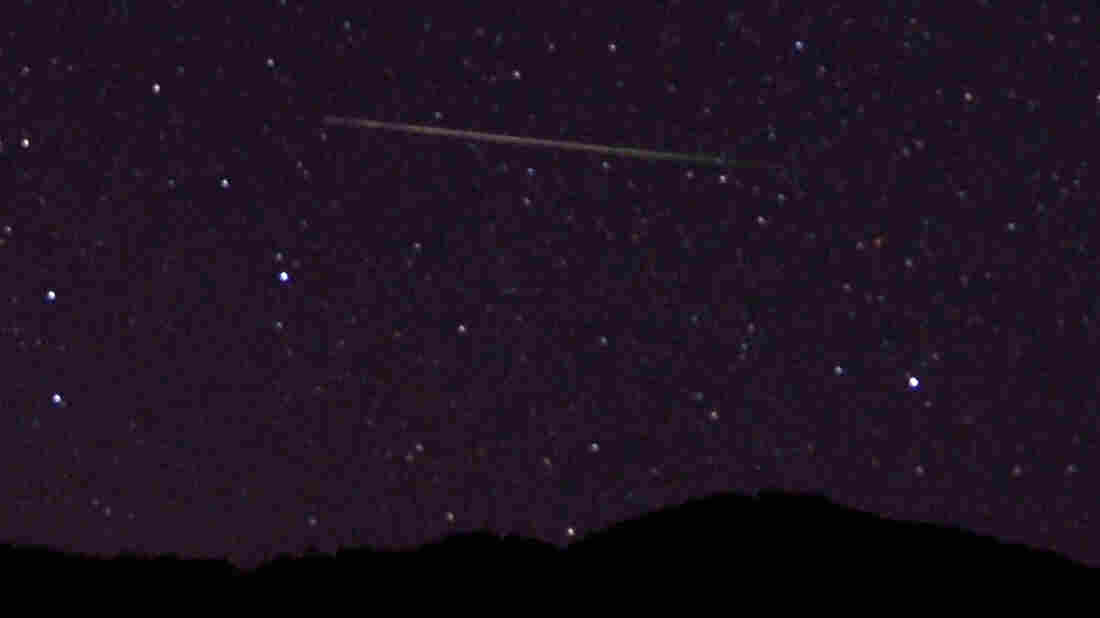 A meteor streaks across the sky north of Castaic Lake, Calif., during last year's Perseid meteor shower. NASA says that tonight's Camelopardalids shower, which has never been seen before, could rival the famous August shower. Gene Blevins/Reuters/Landov hide caption 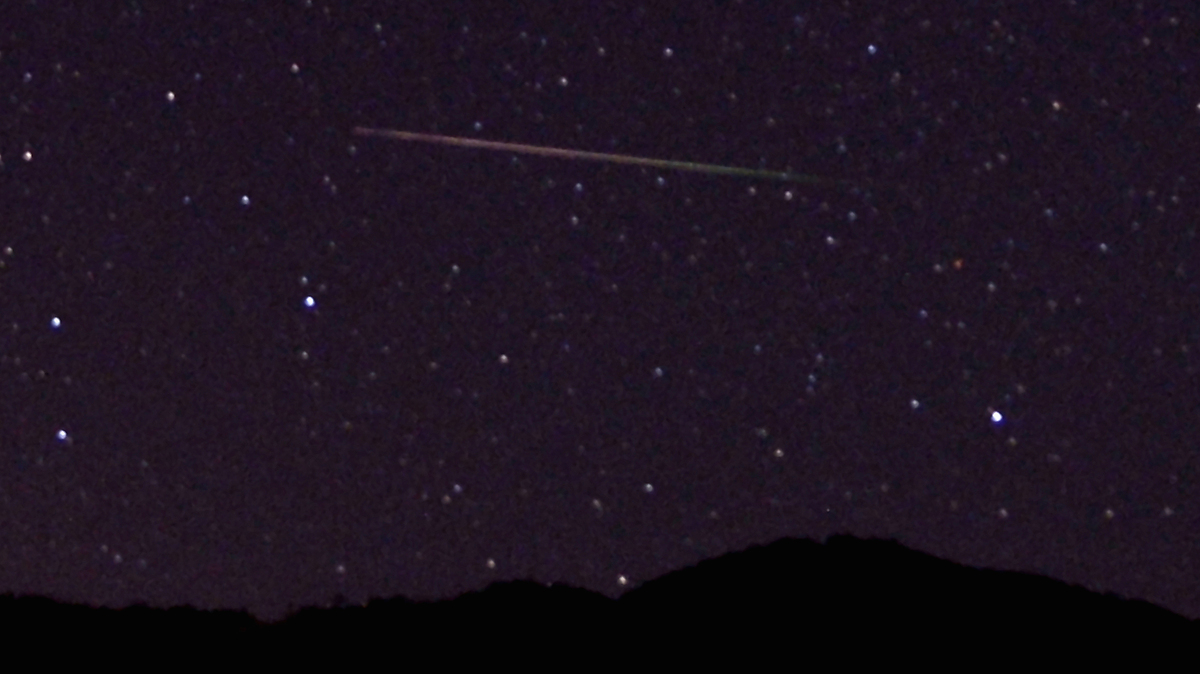 A meteor streaks across the sky north of Castaic Lake, Calif., during last year's Perseid meteor shower. NASA says that tonight's Camelopardalids shower, which has never been seen before, could rival the famous August shower.

An all-new meteor shower makes its debut tonight, and astronomers say it could put on a show starting as early as 10:30 p.m. ET Friday and peaking early Saturday. Called the Camelopardalids, the shower is named after the giraffe constellation. It's expected to be visible in nearly all of the U.S., if skies are clear.

"No one has seen it before," NASA says, "but the shower could put on a show that would rival the prolific Perseid meteor shower in August."

The shower is new to earthlings because its parent, Comet 209P/LINEAR, was only discovered 10 years ago. It passes through Earth's orbit of the sun once every five years or so, leaving a trail of debris behind it.

"North America is well placed for observing the May Camelopardalids," NASA says, adding that "observations are best from the northwestern United States and southern Canada." 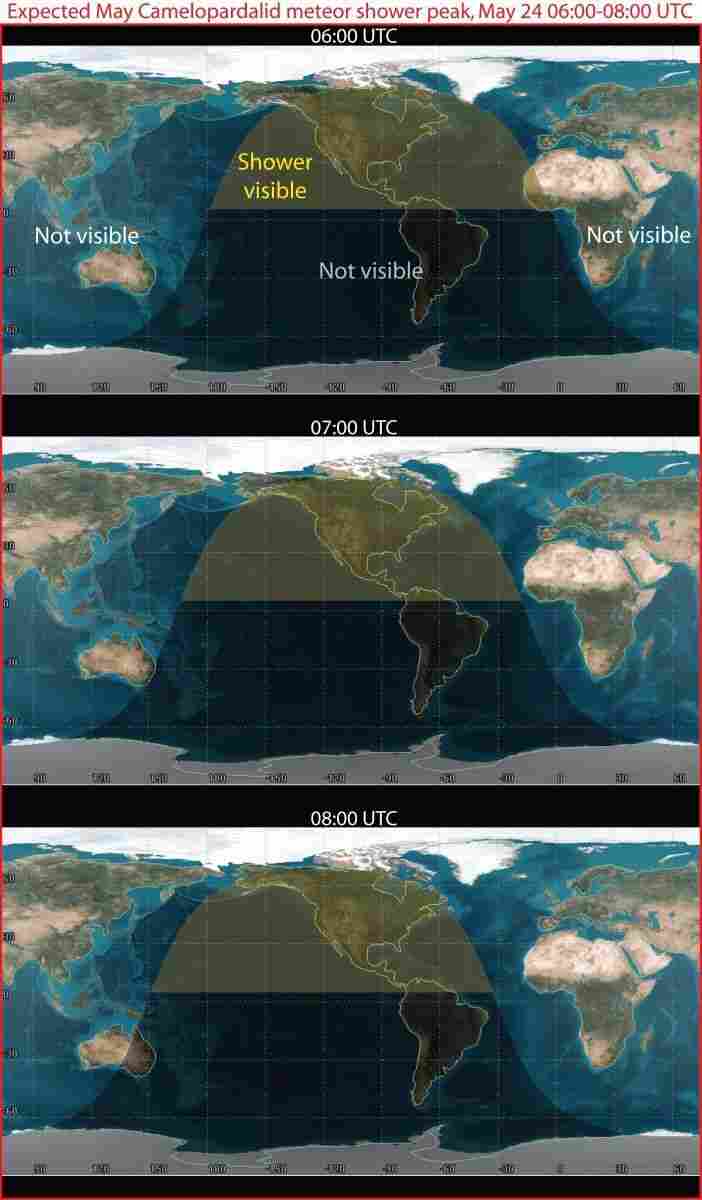 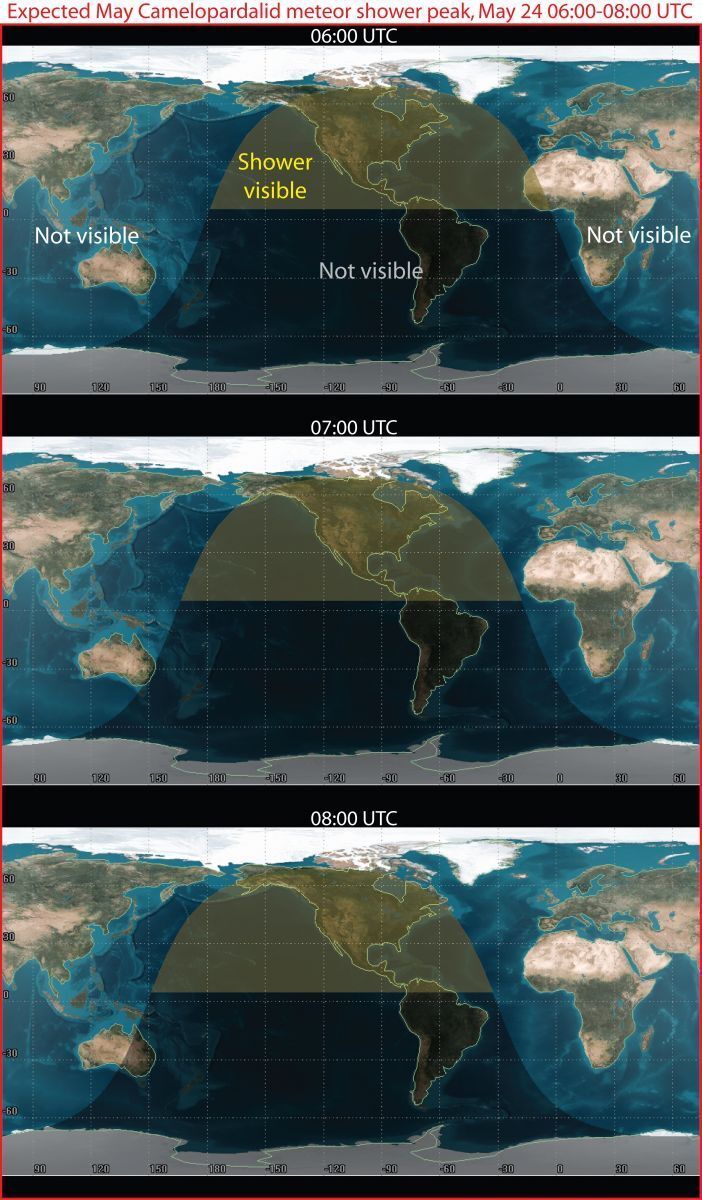 A map from NASA predicts the peak viewing areas and times for the Camelopardalids meteor shower Friday night and early Saturday.

The space agency posted a map highlighting when different areas will have the best chance to see the shower (we'll note that 06:00 UTC translates to 2 a.m. ET). But you'll need clear skies to see it — and the folks at Accuweather.com have posted their own viewing map, based on tonight's weather predictions.

Astronomers say the Camelopardalids will peak between the hours of 2 a.m. and 4 a.m. ET, with a radiant point near Polaris, the North Star.

But as NASA notes, "You don't need to look in any particular direction, just straight up. Meteors can appear all over the sky."

While astronomers are hoping the shower will give viewers a spectacle, they can't be certain that'll happen. It all depends on how much dust the comet threw off hundreds of years ago, in the 1700s and 1800s.

"If Comet 209P/LINEAR was a poor producer of debris, we'll see nothing," NASA meteor expert Bill Cooke tells The Washington Post. "But if the comet was more active 200 or 300 years ago, we'll see a decent show. What happens this Saturday morning was determined a few hundred years ago."

NASA says that "a rate of 200 meteors per hour during the peak may be possible." And because the Camelopardalids travel at much slower speeds than other annual meteors, the effect could be "majestic," Joe Rao of Space.com says. "Instead of swift streaks that blaze into incandescence within a heartbeat and are gone just a second or two later, tonight's meteors might move across the sky in a relatively slow, almost majestic manner."

NASA's Cooke will be hosting a live Web chat about the meteor shower tonight, on a page that will also include streaming video of the skies over the space agency's Huntsville, Ala., facility.

Comet 209P/LINEAR is still active, ranging between the sun and Jupiter. It'll pass within about 3.7 million miles of Earth on May 29, according to NASA's estimates.

To help you talk about the meteor shower, here's how the AP says to pronounce the name: CA-mull-oh-PAR-duh-lids.

One final note: If you're planning to watch the Camelopardalids and you like beer — and you live in Pennsylvania — you're in luck. This meteor shower already has its own beer — or, at least, there's one named for its namesake constellation.

The Camelopardalis is a Belgian IPA from Weyerbacher Brewing in Easton, Pa., that recently came out in a limited release. A review on Beer Advocate says it has an aroma "of citrus, honey, hoppy floral, and apple cider," with "a drying, spicy finish."