Accessibility links
Pope Francis Prays At Wall Separating Israel, West Bank : The Two-Way The pontiff showed symbolic approval for an independent Palestinian state as he arrived in Bethlehem by helicopter. He also invited Israeli and Palestinian leaders to the Vatican for a prayer meeting. 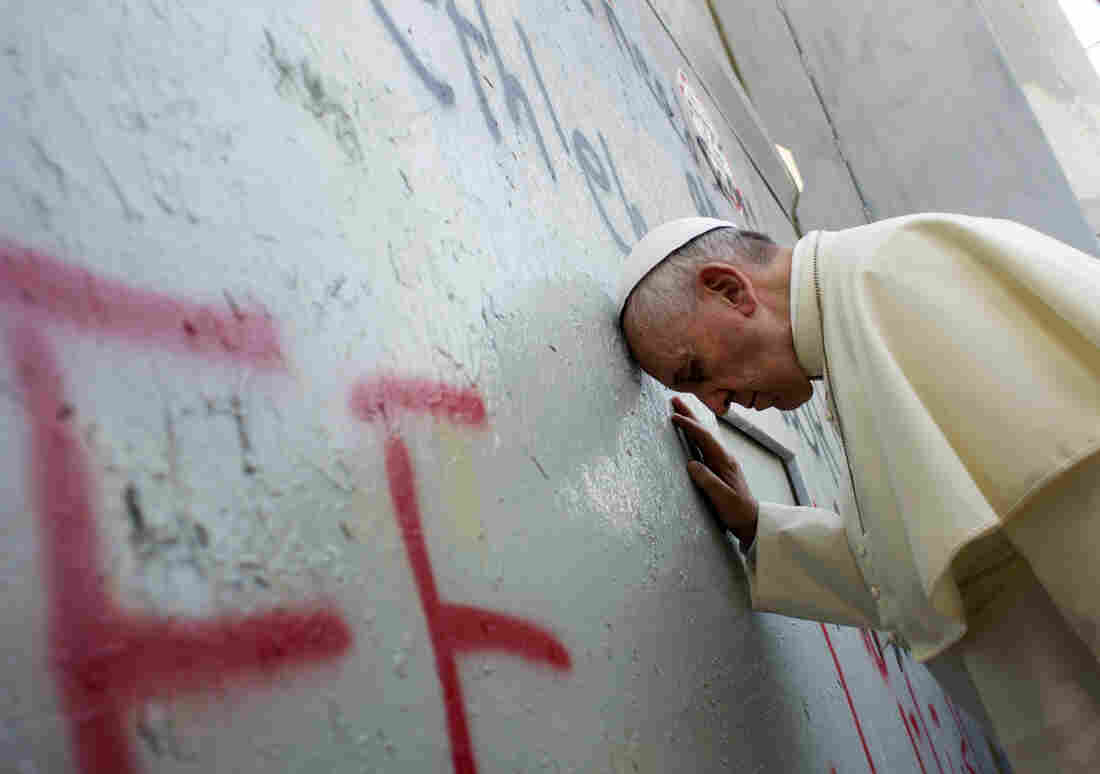 Pope Francis touches the wall that divides Israel from the West Bank, on his way to celebrate a mass in Manger Square next to the Church of the Nativity in Bethlehem. Uncredited/AP hide caption 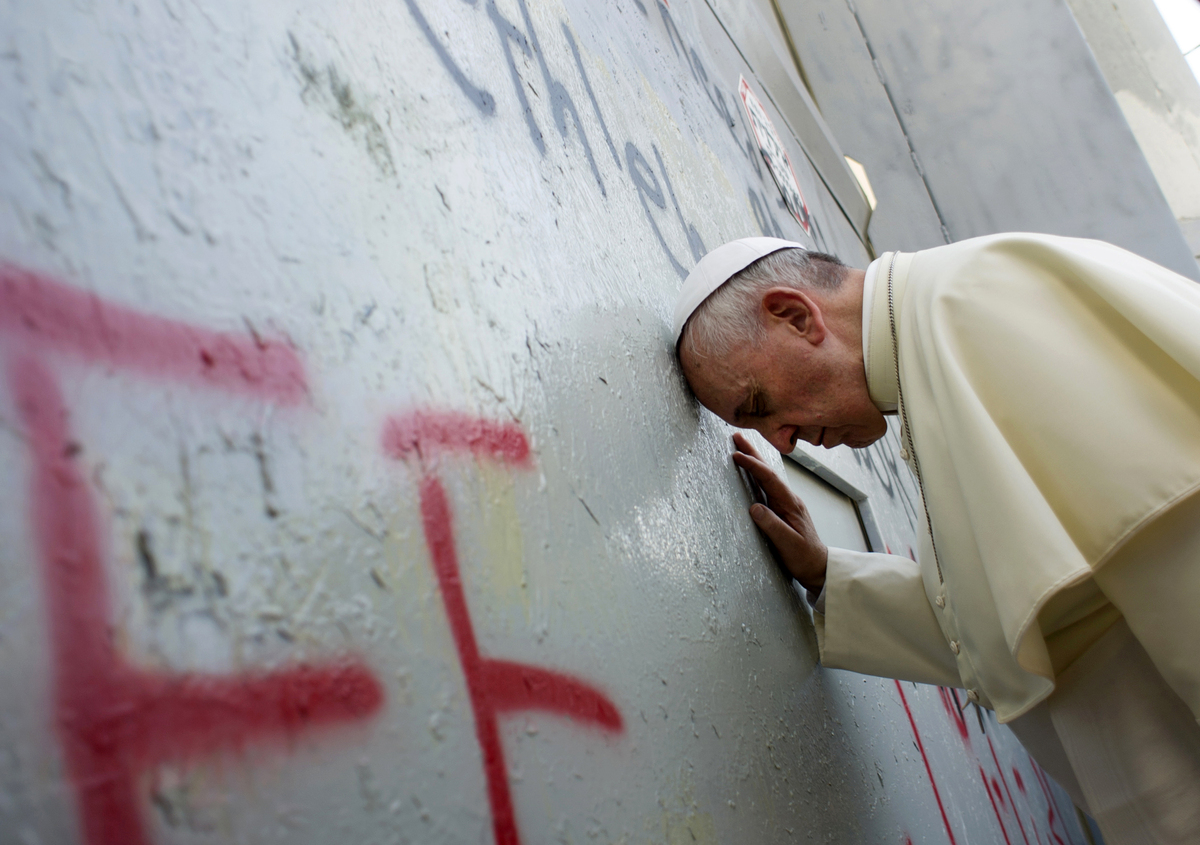 Pope Francis touches the wall that divides Israel from the West Bank, on his way to celebrate a mass in Manger Square next to the Church of the Nativity in Bethlehem.

In what is being characterized as an unprecedented gesture, Pope Francis stopped to pray at a wall that separates Israel from the West Bank in the city of Bethlehem on Sunday.

According to The Guardian, Francis prayed for four minutes during the unscheduled stop.

He put one hand on the wall and leaned over it, in a spot next to red graffiti that read, "Free Palestine." Silently, Francis also touched the wall with his forehead.

As we reported earlier, Francis has already made history on this three-day trip to the Middle East, giving symbolic approval to Palestinian hopes for an independent state by landing directly in Bethlehem on Sunday.

The previous three popes to visit the Holy Land went to the West Bank after first arriving at Tel Aviv, Israel.

After the dramatic stop at the wall, Francis then made another unprecedented call.

"In this, the birthplace of the Prince of Peace, I wish to invite you, President Mahmoud Abbas, together with President Shimon Peres, to join me in heartfelt prayer to God for the gift of peace," he said. "I offer my home in the Vatican as a place for this encounter of prayer."

According to the AP, the two men accepted and will go to the Vatican next month.

The pope is on the second day of his Mideast trip, which began Saturday with a stop in Jordan.

He went directly to a meeting with Palestinian President Mahmoud Abbas, the Associated Press reports.

"Jubilant, flag-waving Palestinians greeted Francis in Bethlehem's Manger Square, where he was to celebrate Mass on a stage next to the Church of the Nativity, built over Jesus' traditional birth grotto."

Worshipers include Arab Christians and migrant workers from Asia, reports NPR's Emily Harris for our Newscast desk. Palestinian and Vatican flags decorated the square, and many people wore black-and-white checked scarves, a symbol of the Palestinian cause, AP says.

Francis is only the fourth pontiff to visit the Holy Land, and will be the first to lay a wreath at the grave of Theodor Herzl, the founder of Zionism.

The Jerusalem Post says that 3,000 Palestinian security forces were deployed for the pope's visit.

"His trip has been billed as a "pilgrimage for prayer," with its roots in faith, not politics.

"But in a region where religion and politics are so closely intertwined, his every remark will take on an added significance."

Later today, Francis will have lunch with Palestinian families and visit a Palestinian refugee camp, then arrive at Ben Gurion airport in Tel Aviv for a welcome ceremony.

The final event of the pope's day is a prayer service at the Church of the Holy Sepulcher in Jerusalem with the leader of the world's Orthodox Christians.