Accessibility links
UC Santa Barbara Hosts Vigil For Victims Of Killing Rampage : The Two-Way The college community was trying to come to terms with a rampage that left seven dead and 13 others injured. Meanwhile, police were still reviewing a 140-page manifesto left behind by the shooter. 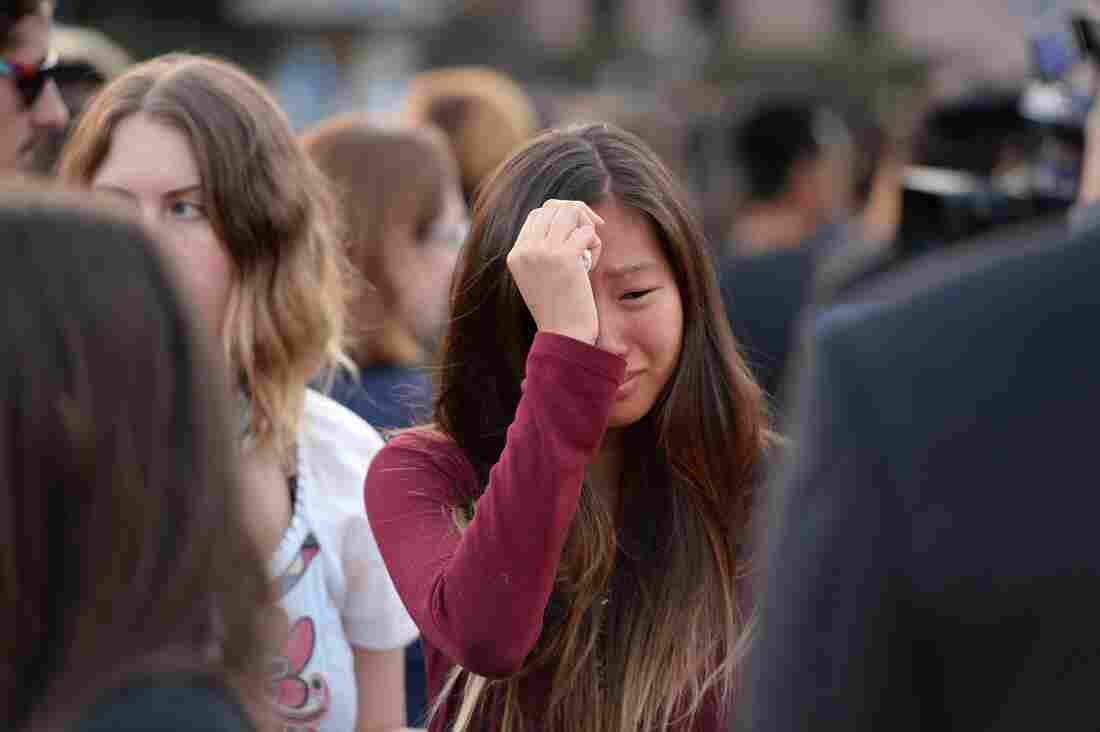 A student weeps during a candlelight vigil on Sunday for the victims of a killing spree in Isla Vista, on the University of California, Santa Barbara campus. Robyn Beck /AFP/Getty Images hide caption 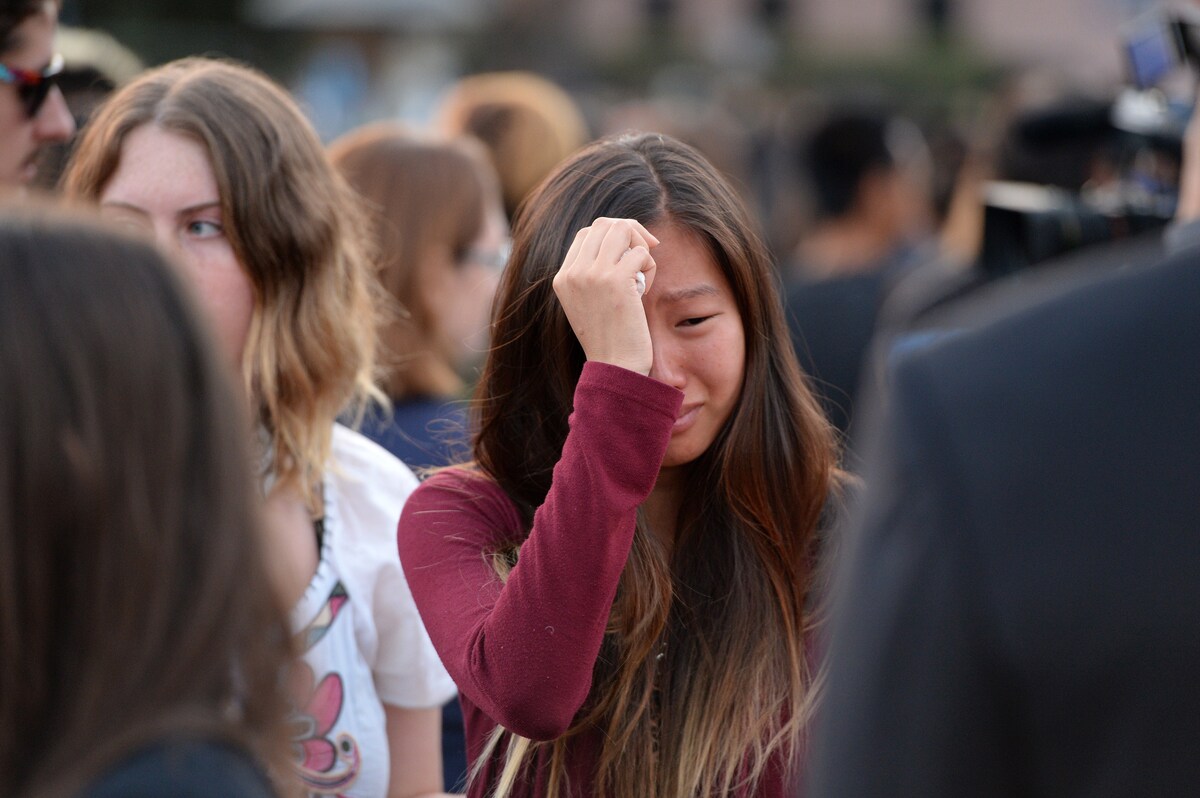 A student weeps during a candlelight vigil on Sunday for the victims of a killing spree in Isla Vista, on the University of California, Santa Barbara campus.

A day after a gunman went on a killing spree in the college town of Isla Vista, Calif., the community was trying to come to terms with the loss of the victims and the cold, deliberate manner in which the rampage was perpetrated.

The Santa Barbara Independent reports that as the sun went down on Saturday, students and faculty gathered on campus, holding candles and singing "Amazing Grace."

Chancellor Henry Yang said there were no words for the sense of mourning the community was feeling over the "loss of such precious life so early."

As we've reported, police on Saturday released a detailed timeline of Elliot Rodger's alleged rampage. They described a disturbed man first stabbing to death three people at his apartment, then getting in his car and driving through the city of Isla Vista and shooting people at several different locations, including the Alpha Phi sorority house.

Police also pointed to a 140-page autobiographical manifesto the alleged gunman sent to police. It's a misogynist tirade, in which he sulks about being a virgin and coldly describes his plan.

"I cannot kill every single female on earth, but I can deliver a devastating blow that will shake all of them to the core of their wicked hearts," he writes. "I will attack the very girls who represent everything I hate in the female gender: The hottest sorority of UCSB."

After trading gunfire with police on a couple of occasions, Rodger crashed his car and police found him dead of an apparent self-inflicted gunshot to the head. Rodger, police said, had bought all three guns, plus the 22 magazines of ammunition he was carrying legally.

Santa Barbara County Sheriff Bill Brown told CNN they believe Rodger had been planning this rampage for about a year. In his manifesto, he says he got his first gun — a Glock 34 — in mid-December.

Richard Martinez, whose 20-year-old son, Christopher, was killed in the rampage, spoke to reporters on Saturday.

CNN reports he was shaken and angry, saying he talked to his son just 45 minutes before he was killed.

"Our family has a message for every parent out there: You don't think it'll happen to your child until it does," Martinez said. "Why did Chris die? Chris died because of craven, irresponsible politicians and the NRA. They talk about gun rights, what about Chris' right to live?"

Martinez then screamed: "When will this insanity stop? When will enough people say, stop this madness, we don't have to live like this? Too many have died. We should say to ourselves — not one more."

On CBS' Face The Nation, Santa Barbara Sheriff Bill Brown said he wished "we could turn the clock back and maybe change some things."

Brown was talking about a wellness check deputies performed in April. Brown said officers interviewed Rodger, but he was able to tell a "convincing story" that "nothing was wrong" and that he wasn't a threat to himself or others.

Brown said it was unclear whether officers checked for guns at the time.

He added: "During the course of his interaction with mental health professionals, he apparently had never been either institutionalized or committed for an involuntarily hold of any kind. And those are the two triggers that actually would have made him a prohibited person in terms of a fire arms purchase. So he was able, sadly, to obtain those three firearms."

In his manifesto, Rodger worried that visit by police would foil his plan. He wrote:

"After only a week passed since I uploaded those videos on Youtube, I heard a knock on my apartment door. I opened it to see about seven police officers asking for me.

"As soon as I saw those cops, the biggest fear I had ever felt in my life overcame me.

"I had the striking and devastating fear that someone had somehow discovered what I was planning to do, and reported me for it.

"If that was the case, the police would have searched my room, found all of my guns and weapons, along with my writings about what I plan to do with them. I would have been thrown in jail, denied of the chance to exact revenge on my enemies. I can't imagine a hell darker than that. Thankfully, that wasn't the case, but it was so close."