Accessibility links
Parents Of Elliot Rodger Heard Of Attack As They Tried To Stop Him : The Two-Way The 22-year-old's parents were rushing to stop him from hurting anyone Friday night when they heard news of a shooting and feared their son was involved. 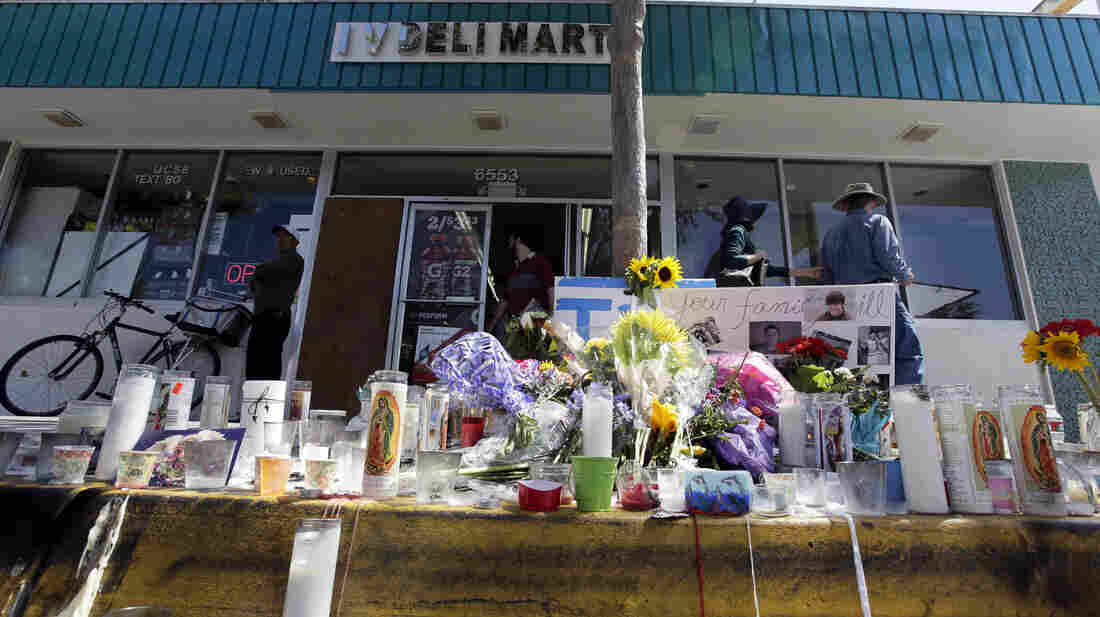 A makeshift memorial sits in front of IV Deli Mart, where part of Friday night's mass shooting took place in the Isla Vista, Calif., community. The parents of Elliot Rodger, accused of killing six people, were reportedly rushing to try to stop their son when they heard about the violence. Chris Carlson/AP hide caption 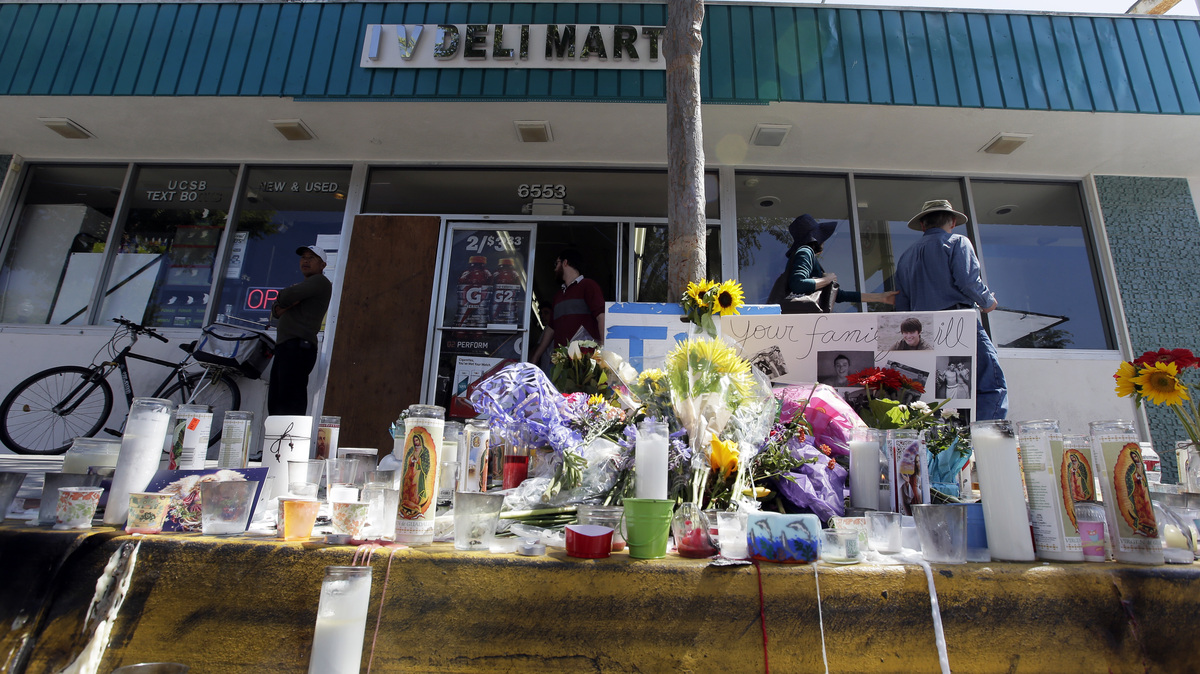 A makeshift memorial sits in front of IV Deli Mart, where part of Friday night's mass shooting took place in the Isla Vista, Calif., community. The parents of Elliot Rodger, accused of killing six people, were reportedly rushing to try to stop their son when they heard about the violence.

Elliot Rodger's parents were rushing to stop him from hurting anyone Friday night when they heard news of a shooting and feared their son was involved. They had driven to Santa Barbara after seeing an alarming video in which he promised a deadly "revenge against humanity."

That's the story as told to the Los Angeles Times by Simon Astaire, a family friend of the Rodgers who says the 22-year-old's parents had called the authorities along the way — only to be told when they arrived that their son had killed six people and apparently himself. The divorced couple had been alerted to the possible danger by their son's therapist after Elliot Rodger sent an email and posted the video message online.

More than a dozen people were injured in Friday night's attack, which police say began when Rodger killed three people in his apartment and continued as he fired at people from his car.

The burst of violence played out in Isla Vista, a coastal community that's centered around the nearby University of California, Santa Barbara, and a community college. Here's a roundup of details we're seeing Monday:

-- "Courteous and polite." "Timid and shy." Those are the words sheriff's deputies used to describe Elliot Rodger when they visited him weeks ago at his family's request, Shirley Jahad of member station KPCC reports. She says the deputies who spoke to Rodger didn't think he qualified for a "5150" detention, which would have put him under psychiatric care for 72 hours.

-- "Obviously, looking back on this, it's a very tragic situation and we certainly wish that we could turn the clock back and maybe change some things," Sheriff Bill Brown said on CBS' Face the Nation on Sunday. "At the time deputies interacted with him, he was able to convince them that he was OK."

-- Rodger lived in a gray area, as someone who was noticeably sad and alone but who was also "highly functioning," his troubles never blowing out of control to the point that authorities felt the need to intervene, the Los Angeles Times reports.

-- "She was everybody's daughter," says Bob Weiss of his daughter Veronika, who was killed near a sorority near UC Santa Barbara's campus. Describing his daughter as an athletic young woman who might have sought to help Rodger, Weiss tells KPCC, "She was a wonderful citizen of this world, and we all lost something — you did, I did, the Rodger family did. We all lost a lot."

-- Another victim was college student Christopher Ross Michaels-Martinez, "who had plans to go to law school following in the footsteps of his mother, San Luis Obispo County Deputy District Attorney Caryn Michaels," reports local KSBY TV news. His father, Richard Martinez, said Saturday, "I talked to him 45 minutes before he died. Everybody thinks it won't happen to their family and then it does."

-- The Santa Barbara County sheriff's department says three 9mm pistols were found in Rodger's black BMW — along with 49 ammunition magazines for the guns (five of which were empty). All three weapons were loaded, had been purchased legally and were registered in the suspect's name, police say, citing the Bureau of Alcohol, Tobacco, Firearms and Explosives.

When he died, Rodger left a "vast digital trail" online, including videos in which he rails against women and "sexually active men," as The Two-Way reported this weekend.

Rodger is accused of leaving a trail of mayhem in Isla Vista, as police say he used a knife, guns and his car to attack people who happened to be in his path. He struck at least two cyclists; he also fired at sheriff's deputies who were responding to the scene.

As of Sunday evening, the Santa Barbara County Sheriff's Office had released all the names of those killed; others remain in the hospital. The notices went out separately, as authorities waited to be sure the victims' families had been notified.

From a note about the men who died at Rodger's apartment:

"The victims are 20-year-old Cheng Yuan Hong of San Jose, California; 19-year-old George Chen, also of San Jose, California; and 20-year-old Weihan Wang of Fremont, California. All three victims were UCSB students. They were found deceased with multiple stab wounds in Rodger's apartment located in the 6500 block of Seville Road in Isla Vista. Hong and Chen are listed on the lease for the apartment as tenants, along with Rodger. Sheriff's investigators are in the process of determining whether Wang was also a roommate or was visiting the residence."

Here are the names of three UCSB students who died of gunshot wounds, from the sheriff's office: