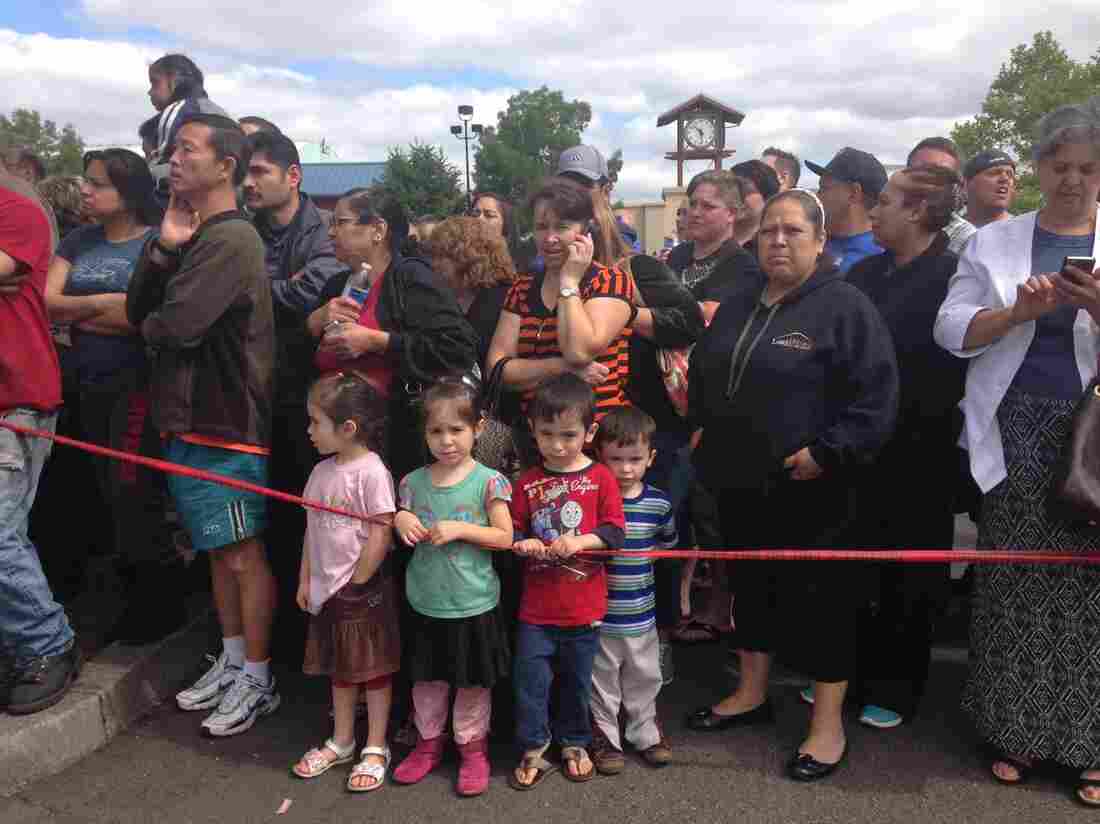 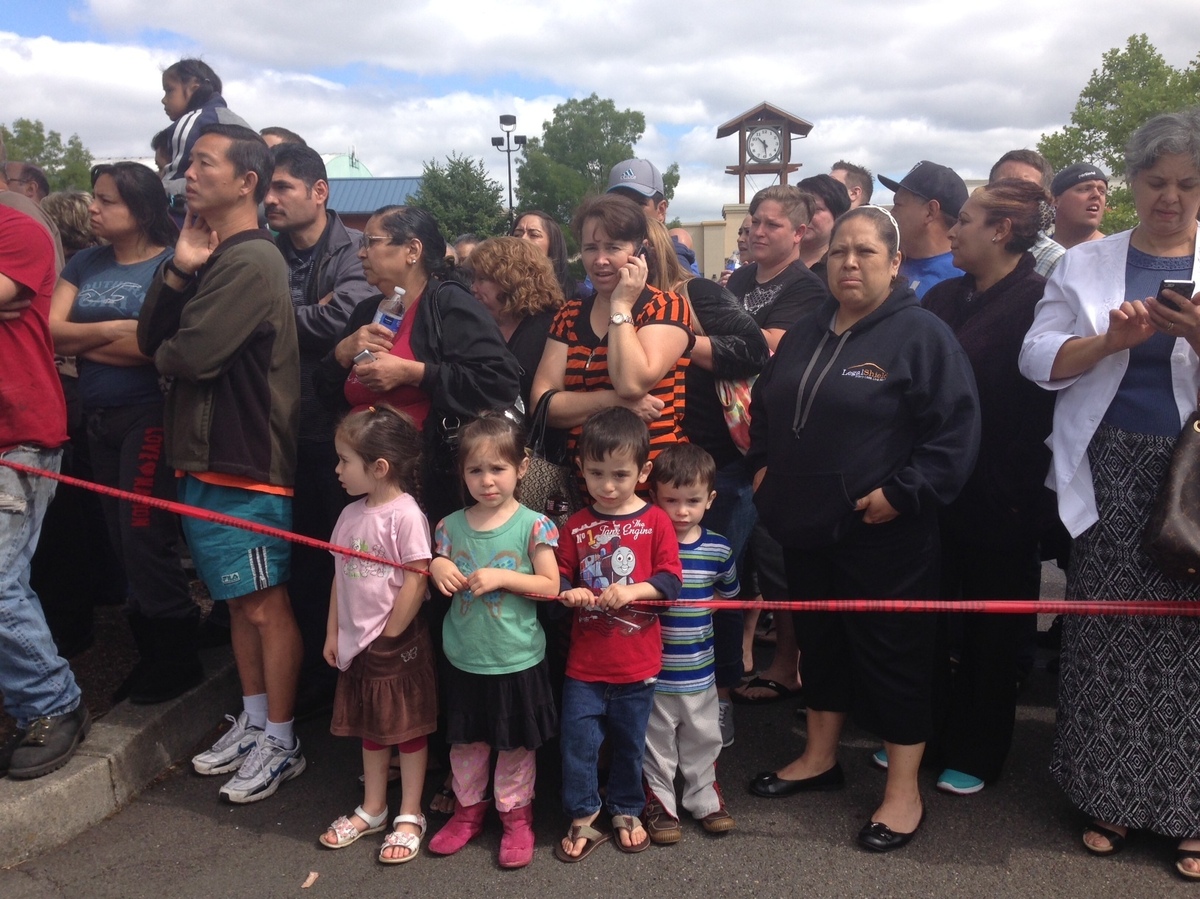 Parents and family members gather at the Cherry Park Safeway in Troutdale, Oregon.

A shooter entered an Oregon high school with a rifle today and killed one student and injured a teacher, authorities said. 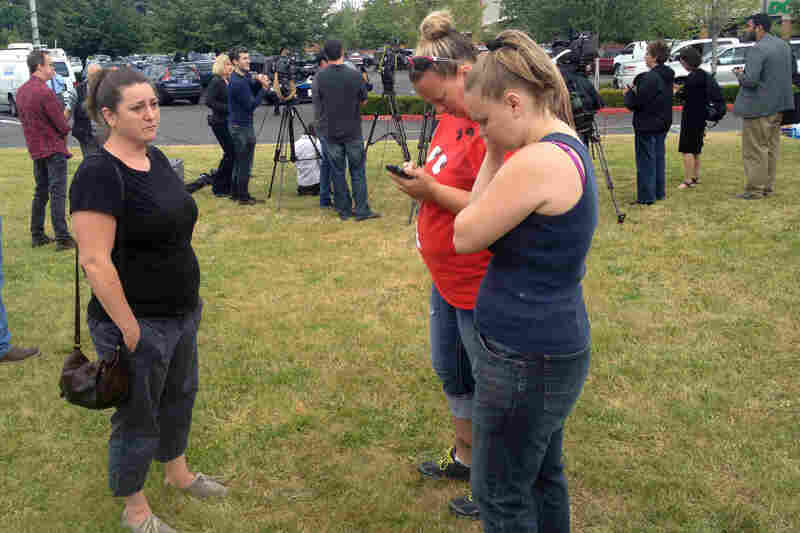 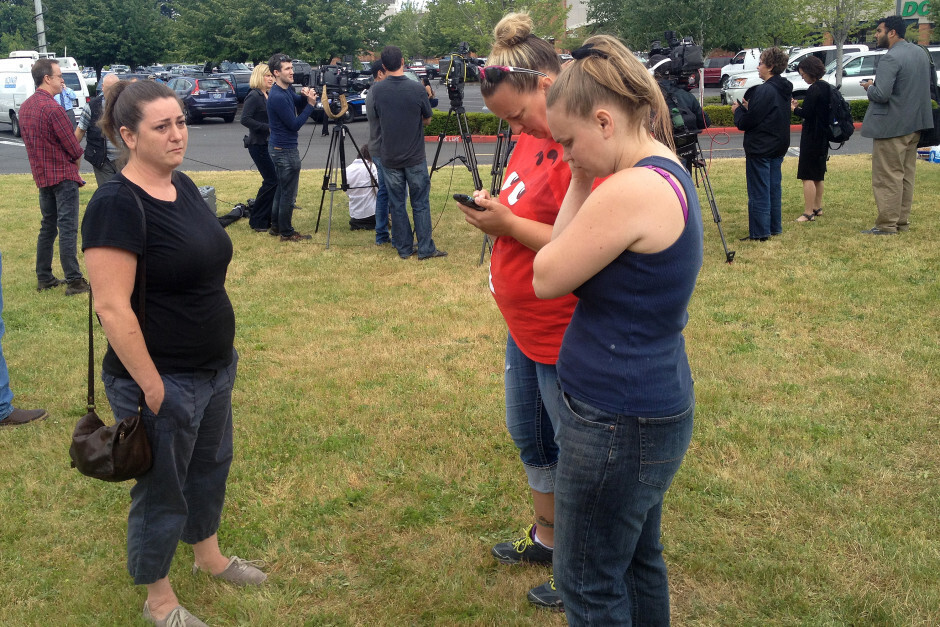 Parents and family members gather at the Cherry Park Safeway in Troutdale, Oregon.

Police and a SWAT team descended on Reynolds High School in the mid-morning hours, after receiving reports of a shooting.

Images from local television showed students being evacuated from the Troutdale, Oregon, school with their hands above their heads. As parents heard the news, they streamed toward the school.

Live coverage from KOIN-TV showed parents gathering at a parking lot, some of them in tears.

Oregon Public Broadcasting is live blogging. We will update this post once we have more information. The next scheduled press conference is at 3 p.m. ET.

During a question and answer with users of the microblogging site Tumblr, President Obama expressed frustration at the inability of Congress to legislate gun control.

"My biggest frustration so far is the fact that this society has not been willing to take some basic steps to keep guns out of the hands of people who can do just unbelievable damage," Obama said. "We're the only developed country on earth where this happens. And it happens now once a week and it's a one-day story. There's no place else like this."

Obama said the fact that Washington couldn't do anything about this issue is "stunning."

"The country has to do some soul searching about this. This is becoming the norm and we take it for granted in ways that as a parent are terrifying to me," Obama said.

Troutdale Police Chief Scott Anderson said one teacher was hurt during the shootings, but his injuries were not life threatening.

He added that the shooter used a rifle and that police had identified the shooter, but were not prepared to release more information.

Anderson said that during the evacuation process another gun was found, but it was unrelated to the shooting.

NPR member station OPB talked to a student at the school who said students were searched and "another student nearby was discovered to be carrying a gun." Anderson said the person carrying the gun was taken into custody.

Anderson added the incident was brought to an end by tactical teams. It's unclear whether that means police killed the shooter.

During a press conference, Sheriff's office spokesman Steve Alexander said a shooter entered the high school and shot and killed a student. The shooter is also dead, though there is no detail on how the shooter died.

Officials did not say if any others were injured.

"This is a very, very tragic day and one that I had hoped would never be part of my experience," Reynolds School Superintendent Linda Florence said at the press conference.

She said the school would release more details through a press release.

In a statement, the Multnomah Co. Sheriff's Office says the situation at the school has been "stabilized" and "the shooter is confirmed deceased."

The office did not mention any injuries or other fatalities.