Accessibility links
ISIS: An Islamist Group Too Extreme Even For Al-Qaida : The Two-Way Al-Qaida said in February that it has no links with the Islamic State of Iraq and Syria. But since then, ISIS has only gained ground — and members. It's now making inroads across Iraq.

ISIS: An Islamist Group Too Extreme Even For Al-Qaida

ISIS: An Islamist Group Too Extreme Even For Al-Qaida 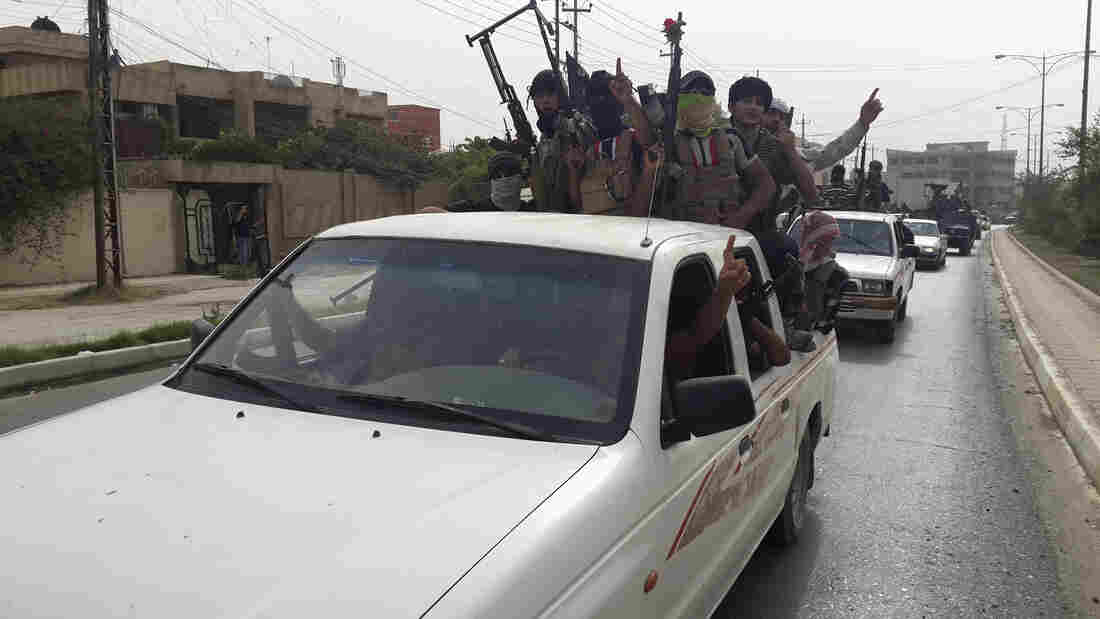 Fighters of the Islamic State of Iraq and Syria celebrate on vehicles taken from Iraqi security forces in Mosul, Iraq, on Thursday. Reuters /Landov hide caption 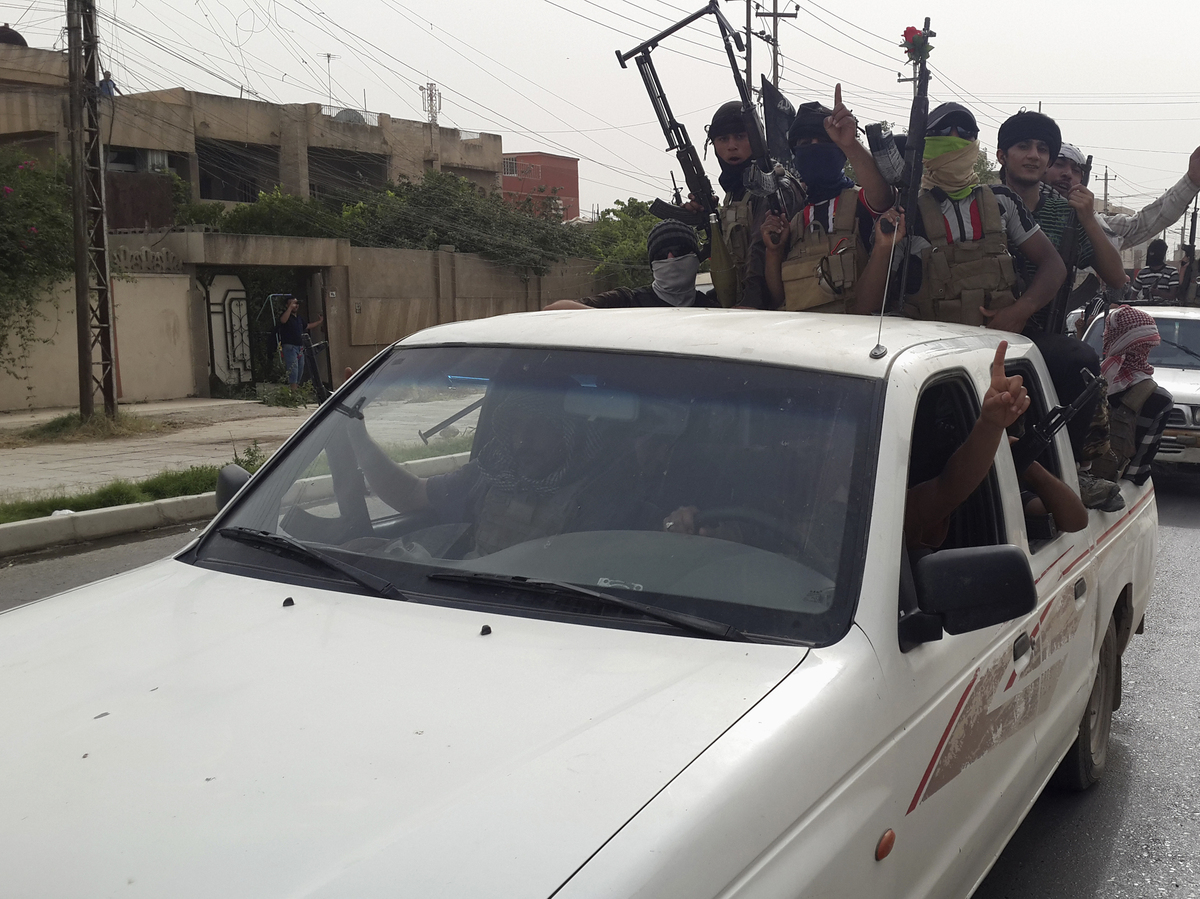 Fighters of the Islamic State of Iraq and Syria celebrate on vehicles taken from Iraqi security forces in Mosul, Iraq, on Thursday.

The Sunni militant group ISIS, known for its brutal tactics and harsh interpretation of Shariah law, is pushing farther into Iraq. The organization is considered so extreme that even al-Qaida leaders want nothing to do with it.

In February, as we reported at the time, a statement posted on jihadist websites and attributed to al-Qaida leader Ayman al-Zawahiri denied that the terrorist group had any links with the Islamic State of Iraq and Syria.

"Al-Qaida announces it is not linked to ... [ISIS], as it was not informed of its creation [and] did not accept it," the statement said. ISIS "is not a branch of al-Qaida, has no links to it, and the [al-Qaida] group is not responsible for its acts."

"Zawahiri's complaints about the group seem to be the same as the ones many Iraqis and Syrians have — that it has set up mini-Islamic states and imposed harsh rules on the local population."

ISIS's Gains And Its Reach

Al-Qaida's move was seen as an attempt to reassert authority over Islamist fighters in Syria, where ISIS has joined rebels fighting the regime of President Bashar Assad.

Reuters reported in February that ISIS also "has fought battles with other Islamist insurgents and secular rebel groups, often triggered by disputes over authority and territory. Several secular and Islamist groups announced a campaign last month against [ISIS]." It adds:

"The internecine fighting — some of the bloodiest in the war so far — has undermined the uprising against Assad and dismayed Western powers pushing for peace talks between the government and opposition."

While Assad remains in control of Syria, ISIS is active in much of the north and has seized control of key cities across the border in Iraq. Just this week, it has taken Mosul, Tikrit and towns in Diyala province. The gains may seem sudden, but as NPR's Larry Kaplow has noted, the group has been pushing into Iraq for months. He writes:

"ISIS seized the strategic, but smaller city of Fallujah in January. Fallujah is only about an hour's drive west of Baghdad. The group has also held areas farther to the west, near the Syrian border."

In the words of the The Economist, ISIS is creating "a proto-state on the ungoverned territory straddling the borderlands between Syria and Iraq."

The group's march over the past 18 months is seen in this map: 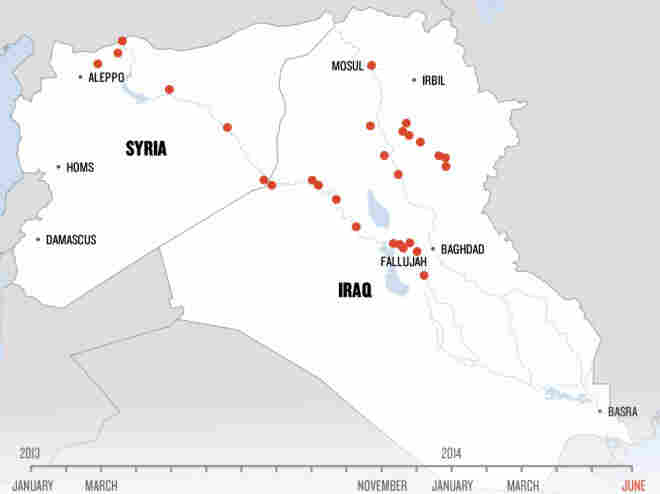 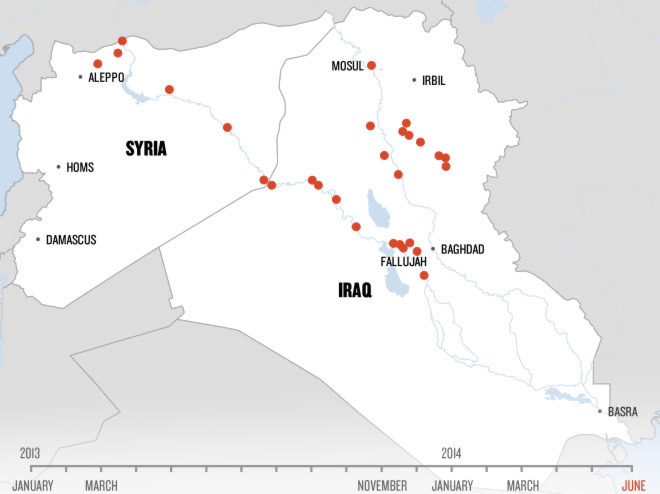 It has used similar methods in Syria and, reportedly, in areas seized recently in Iraq. Here's more from The Economist:

"The carnage in Iraq, though not as numerically horrendous as in Syria, has been growing ferociously, leaving 5,400 people dead this year alone. According to some estimates, ISIS has been responsible for 75% to 95% of all the attacks. It has organised a number of prison breaks, such as one in 2013 from Abu Ghraib, whence several hundred jihadists escaped to join the fray; this week ISIS may have freed some 2,500 hardened fighters from jail in Mosul.

"Whether in Iraq or Syria, ISIS has sought to terrify people into submission. On June 8th, as a typical warning to others, it crucified three young men in a town near Aleppo for co-operating with rival rebels. It has kidnapped scores of Kurdish students, journalists, aid workers and, more recently, some Turkish diplomats."

ISIS's chief is Abu Bakr al-Baghdadi. Little is known about him. Baghdadi is being called the world's most powerful jihadi leader, and his success has made ISIS more appealing to would-be jihadists than al-Qaida and its leader Zawahiri.

"For the last 10 years or more, [Zawahiri] has been holed up in the Afghanistan-Pakistan border area and hasn't really done very much more than issue a few statements and videos," Richard Barrett, a former counterterrorism chief at MI6, Britain's foreign intelligence service, told Agence France-Presse. "Whereas Baghdadi has done an amazing amount — he has captured cities, he has mobilised huge amounts of people, he is killing ruthlessly throughout Iraq and Syria.

"If you were a guy who wanted action, you would go with Baghdadi."

AFP reports that about 80 percent of the 12,000 or so foreign fighters in Syria have joined the group. The group, AFP reported, says it has fighters from across Europe, the United States, the Arab world and the Caucasus.

(Note to readers: NPR is calling this group ISIS. Other organizations, including The Associated Press, are calling it ISIL, for the Islamic State for Iraq and the Levant.)