Accessibility links
One Of Kenya's Legendary 'Tuskers' Is Killed By Poachers : The Two-Way The elephant Satao was known as a tusker, because his tusks were so large they almost touched the ground. A conservation group identified Satao despite his mutilated carcass.

One Of Kenya's Legendary 'Tuskers' Is Killed By Poachers

One Of Kenya's Legendary 'Tuskers' Is Killed By Poachers 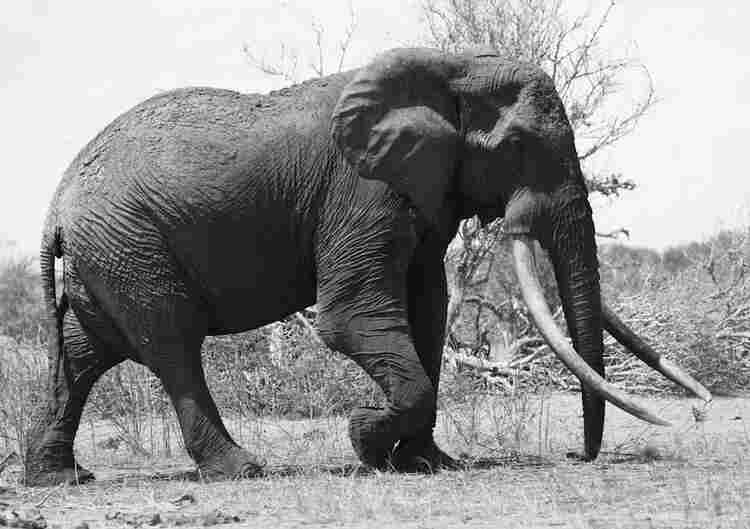 Satao was a rare elephant with tusks so big they almost touched the ground. Tsavo Trust hide caption

Kenya is mourning the death of one of its legendary elephants.

Satao was known as a tusker, one of the few remaining elephants whose tusks are so big they almost touch the ground. Unfortunately, Satao faced an end many others have faced before: He was killed by poachers, who mutilated his head to remove his ivory.

The Tsavo Trust, a conservation group in Kenya, says that they spotted a large carcass in early June and while they feared it was Satao, they waited until they could collect more evidence to determine that the carcass was, indeed, Satao.

"Satao was shot dead by poisoned arrow on 30th May 2014," the trust reports. "The arrow had entered his left flank and he stood no chance of survival."

As The Guardian reports, however, Satao had survived an attack once before. In March, Mike Chase, the director of Elephants Without Borders, reported seeing "two seeping wounds on Satao's flank." They were arrow wounds, but despite pain, Satao survived.

Mark Deeble, a wildlife fimmaker, wrote about his encounter with Satao around that period on his blog. He writes that Satao was a rare creature, maybe one of a dozen left in Kenya.

Deeble sat in a metal box for weeks to try to film Satao. When he finally showed up, it was a breathtaking and sad experience. Deeble wrote:

"Initially I thought the sun had reflected off the windscreen of a distant vehicle, but there were no tracks close by. Whatever it was disappeared, then glinted once more. Alert now, it was several minutes before I saw it again. I came to the slow realization that what I was looking at was sunlight reflecting off an elephant's tusks. Gradually, like in the opening scene from 'Lawrence of Arabia', their owner materialized through the shimmering haze. A mirage from the Taru desert — a magnificent, dusty behemoth.

"Other elephants stood sleeping, clustered in the shade of acacias, apparently unaware of the bull's approach. He didn't walk straight to water. It took him almost an hour to cover the final kilometer as he slowly zig-zagged from one bush to another. The glint I'd seen, came whenever he turned his head and appeared to bury it in a bush. Each time he did, he'd wait a few minutes, partially hidden, then continue zig-zagging upwind, scenting the air, to check there wasn't a poacher hidden at the waterhole.

"I was mystified at the bull's poor attempt to hide — until it dawned on me that he wasn't trying to hide his body, he was hiding his tusks. At once, I was incredibly impressed, and incredibly sad — impressed that he should have the understanding that his tusks could put him in danger, but so sad at what that meant."

In the comments of the post, Deeble explains that he initially left Satao's name off his post, to try to protect him from poachers. With Satao's death, he has added it to the headline.

"He was very special," Deeble writes. "If his death can focus the world's attention on the terrible trade in ivory and help end it, then it won't have been in vain."