Accessibility links
ISIS Rebels Drive Closer To Baghdad; U.S. Considers Options : The Two-Way Extremist group Islamic State of Iraq and Syria is attacking the strategic city of Baqouba, less than 40 miles from Baghdad. The U.S. is sending military personnel to its embassy in the capital. 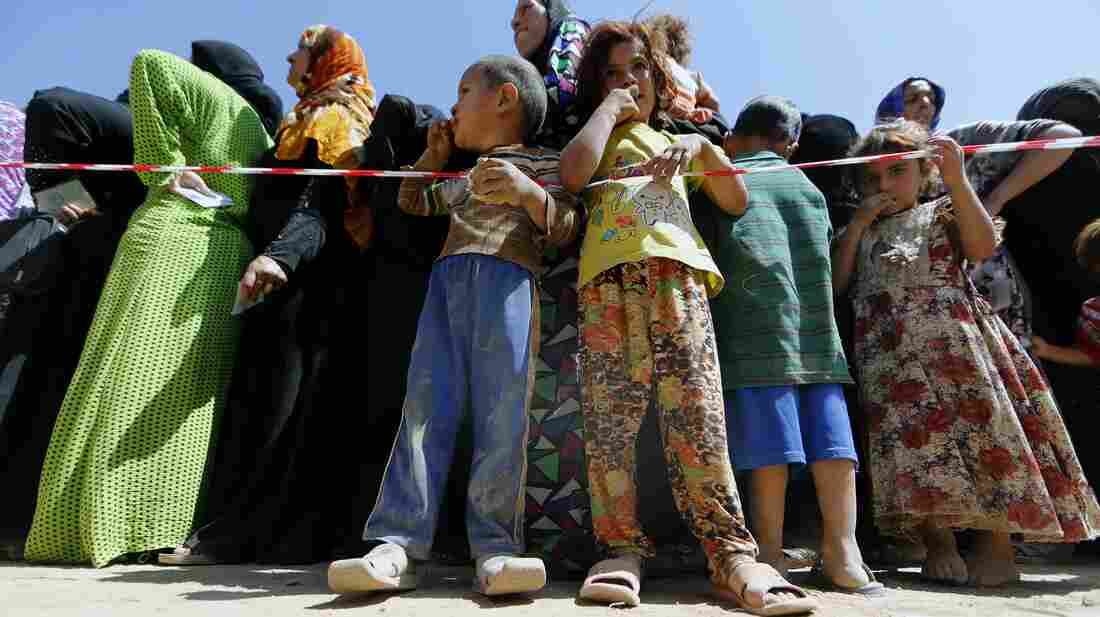 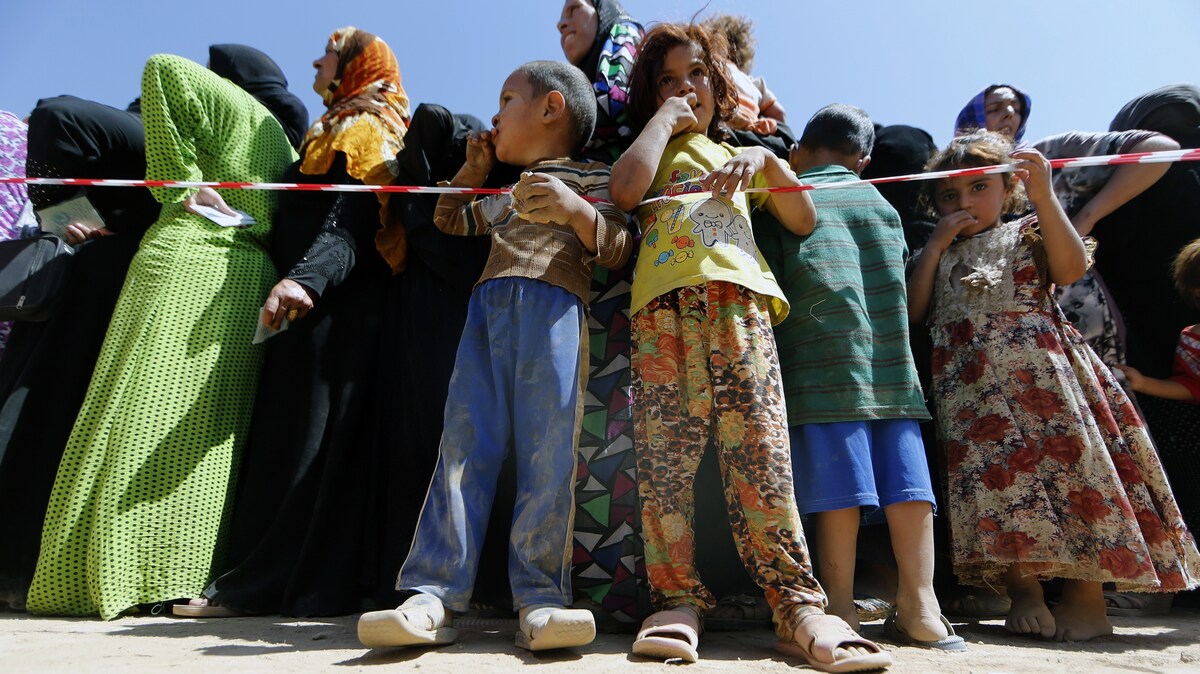 Displaced Iraqi children line up with their mothers Tuesday to register at a temporary camp for people fleeing violence in northern Iraq.

The extremist group Islamic State of Iraq and Syria is tightening control of Iraq's Sunni Muslim heartland, attacking the strategic city of Baqouba, less than 40 miles from Baghdad. The U.S. is sending up to 275 military personnel to bolster its embassy in the capital; President Obama is also reportedly weighing airstrikes.

"ISIS is one of the most extreme Islamist organizations globally," NPR's Leila Fadel reports from northern Iraq, for our Newscast unit. "It's so extreme that even al-Qaida has disavowed it."

Fadel says the militants used mortars to attack a police station on the western side of Baquoba, an attack that has reportedly killed 40 prisoners in the station.

The situation in Iraq came up during U.S. discussions with Iran over its nuclear program. But both sides of the talks being held in Vienna stressed that a joint military operation with Americans and Iranians in Iraq won't happen.

"Iran is a great country that can play a key role in restoring stability in Iraq and the region," a senior Iranian official tells Reuters, adding, "Military cooperation was not discussed and is not an option."

ISIS seized northern cities such as Mosul and Tikrit in quick succession last week. On Monday, it took Tal Afar, west of Mosul.

Fadel says that while the group has boasted of holding mass executions, some residents of Mosul say life is continuing at an almost normal pace since ISIS took the city. But streams of people are moving away from the fighting.

"Government sources say Baquba — capital of Diyala province on the northern approaches to Baghdad — saw rebels take control of several districts on the western outskirts of the city before these were regained by government troops and allied Shia militia." 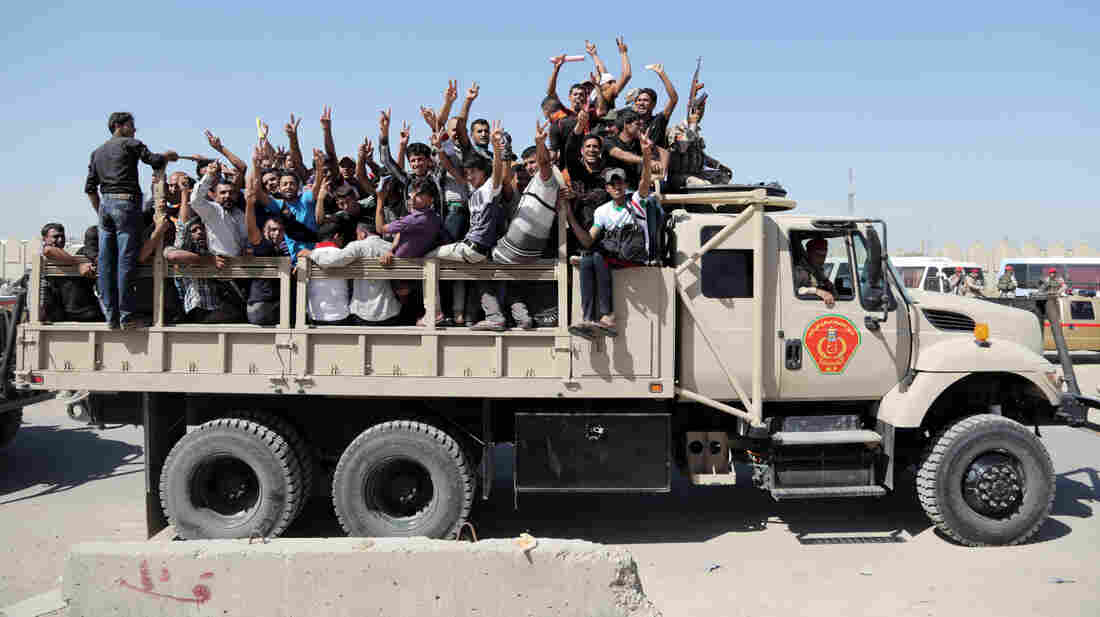 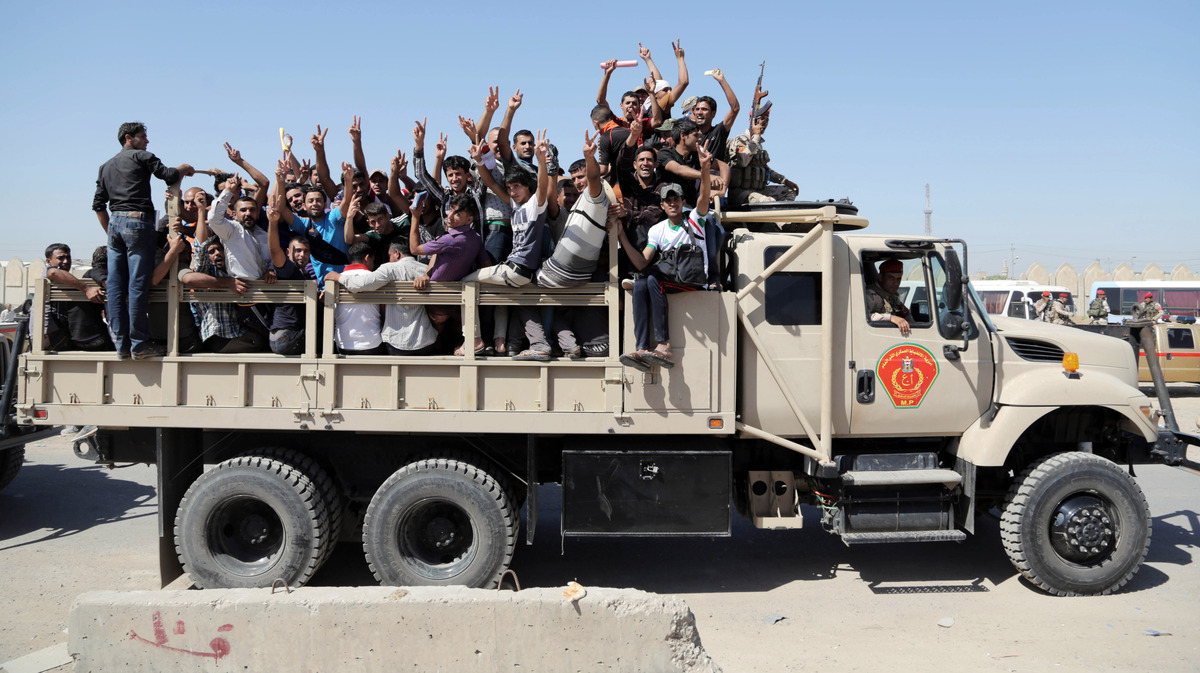 Iraqi men flash victory signs as they leave the main recruiting center to join the Iraqi army in Baghdad on Tuesday.

The U.N. has condemned the mass executions and called for an end to the sectarian clashes.

"Based on corroborated reports from a number of sources, it appears that hundreds of noncombatant men were summarily executed over the past five days, including surrendered or captured soldiers, military conscripts, police and others associated with the government," said Navi Pillay, U.N. high commissioner for human rights.

As we reported last week, violence around Mosul has triggered the flight of an estimated 500,000 people. Fadel adds that some of those caught up in the fighting are also concerned about a possible backlash by government forces if they regain control of areas taken by ISIS.

Any U.S. airstrikes on the group could be complicated, The Washington Post notes:

"Targeting fighters from [ISIS] would not be difficult if they continue to advance toward Baghdad along highways and other visible routes, the former military commanders said. But airstrikes would become far more complicated if the insurgents stay within the cities they have taken control of in recent weeks, raising the likelihood of civilian casualties."

The rebel group has added to its ranks as it has spread — and it's fueling itself with nearly half a billion dollars taken from banks in territory it controls.

"That figure is now up to $495 million," security analyst Theodore Karasik tells NPR's Deborah Amos, "because of gold that they were also able to recover. This makes them the richest insurgent/terrorist group to ever exist."

The group has kept its finances as a priority, Karasik says, noting that ISIS set up covert oil exports after seizing oil wells in Syria.