Accessibility links
After His Game-Winning Goal, We Ask, Who Is John Brooks? : The Two-Way The 21-year-old rookie defender became an instant sensation when he scored the game-winning goal versus Ghana, giving the U.S. a chance to advance in the tournament.

After His Game-Winning Goal, We Ask, Who Is John Brooks?

After His Game-Winning Goal, We Ask, Who Is John Brooks? 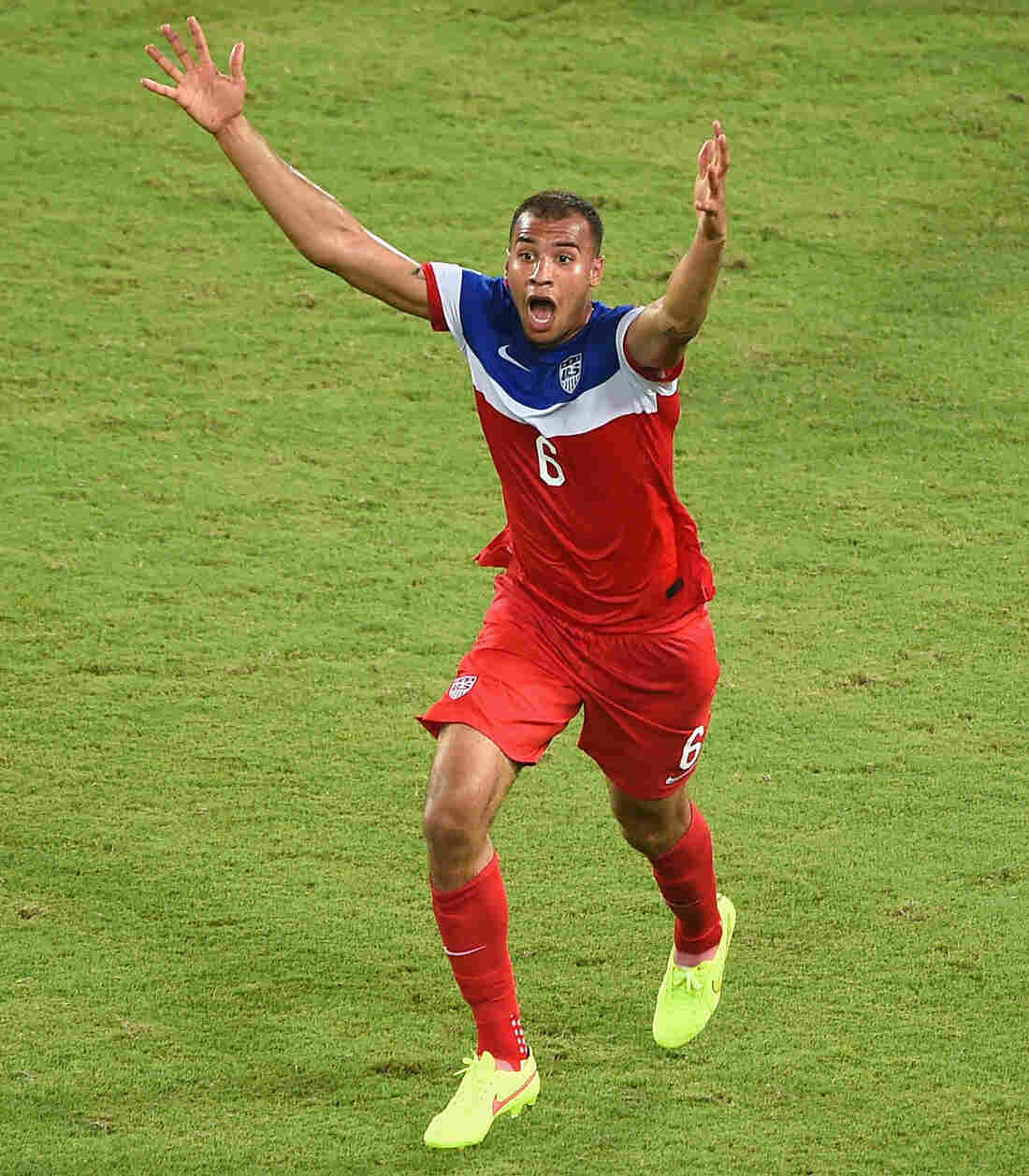 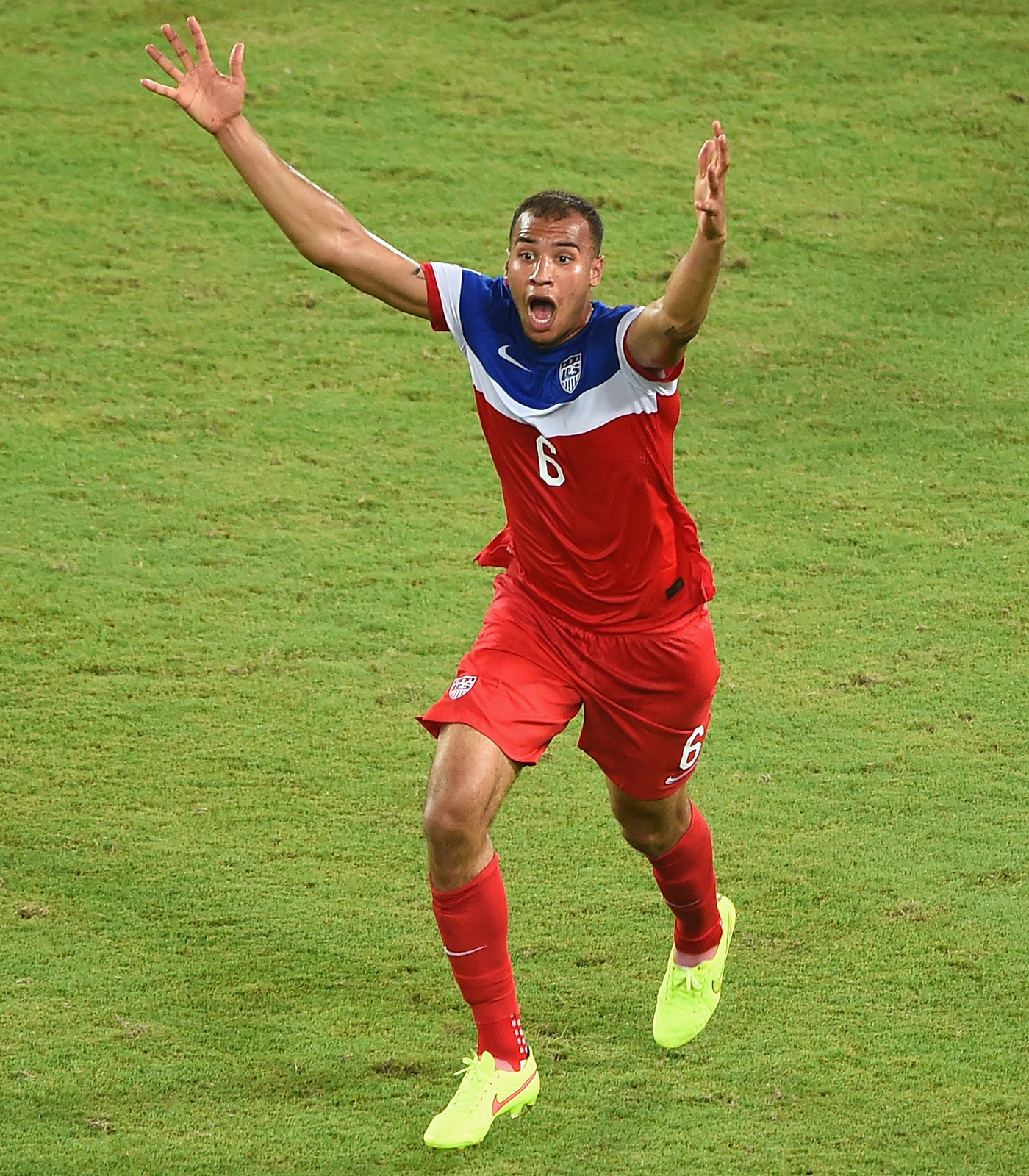 The name John Anthony Brooks likely didn't ring a bell for many Americans before Monday.

But by minute 87 of the U.S. vs. Ghana game, John Brooks had become America's newest national hero.

The 21-year-old rookie defender pounded a header into the ground and past Ghana's Adam Kwarasey. It's hard to overstate the importance of this victory for the United States. During the previous two World Cups, Ghana had kicked the team out of the tournament. As The New York Times put it, Monday's victory marked the moment when the United States Men's National Team "was no longer an also-ran in Ghana's shadow."

Also, with games against Portugal and Germany — two of the world's most formidable opponents — this was a crucial game if the U.S. is to make it out of the first round.

With that, here are a few things you should know about Brooks, who also became the first American male to come off the bench to score a goal in a World Cup game:

-- Brooks was born in Germany and has never lived in the United States. His father, who is from Chicago, was stationed there with the military.

-- He was recruited by both the German national team and the U.S. national team. He picked the red, white and blue, and in an interview with USSoccer.com, he said it wasn't a tough decision.

"The U.S. really wanted me, so it was not a hard decision to play for the USA," he said. "I talked a lot to my family. My dad, who is from Chicago, my mom, my sister, my grandparents, my agent ... all of them gave me advice. Since I decided to play for the U.S., they have been very happy, congratulating me and wishing good luck."

-- He had a dream. Yep. He told ESPN after Monday's game that he had a dream before the game that he scored in the 88th minute. The interviewer asks incredulously, "And it came true?" Brooks said, without missing a beat, "Yeah."

-- In 2012, The New York Times reported that Brooks — then 19 — had been having a tough time joining the U.S. team because his hometown team, Hertha Berlin, had not released him.

-- He has some cool tattoos. Men In Blazers, a football news site, writes that he has two tattoos on both of his elbows. On the left, there's a map of Berlin with a star over his birthplace, and on the right is a map of Illinois with a star over Chicago, his dad's hometown.

-- Speaking of tattoos, Brooks was also reportedly benched because he decided to get a big tattoo on his back during the Bundesliga season. ESPN reports:

"Last Sunday, Brooks did not make the Hertha squad for their away game at Bayer Leverkusen. According to Berliner Morgenpost, the U.S. international was omitted from the trip because of a 'large-scale back tattoo,' which currently makes football difficult for the defender.

"During the stitching process the skin region should not be touched, and also any perspiration should be avoided. The back tattoo has not only limited Brooks' appearances on the training pitch, but has also infuriated [Hertha coach Jos] Luhukay.

" 'I don't have any understanding for that. The tattoo could lead to an inflammation, and, naturally, that is not good,' Luhukay was quoted by the Berlin based paper."

-- We'll leave you with Brooks' official US Soccer interview: