Accessibility links
House Panel Grills GM CEO And Investigator Over Switch Recall : The Two-Way Questions about a potential cover-up dominate a congressional hearing about General Motors' handling of a deadly safety flaw. "How could they not know?" one congressman asked. 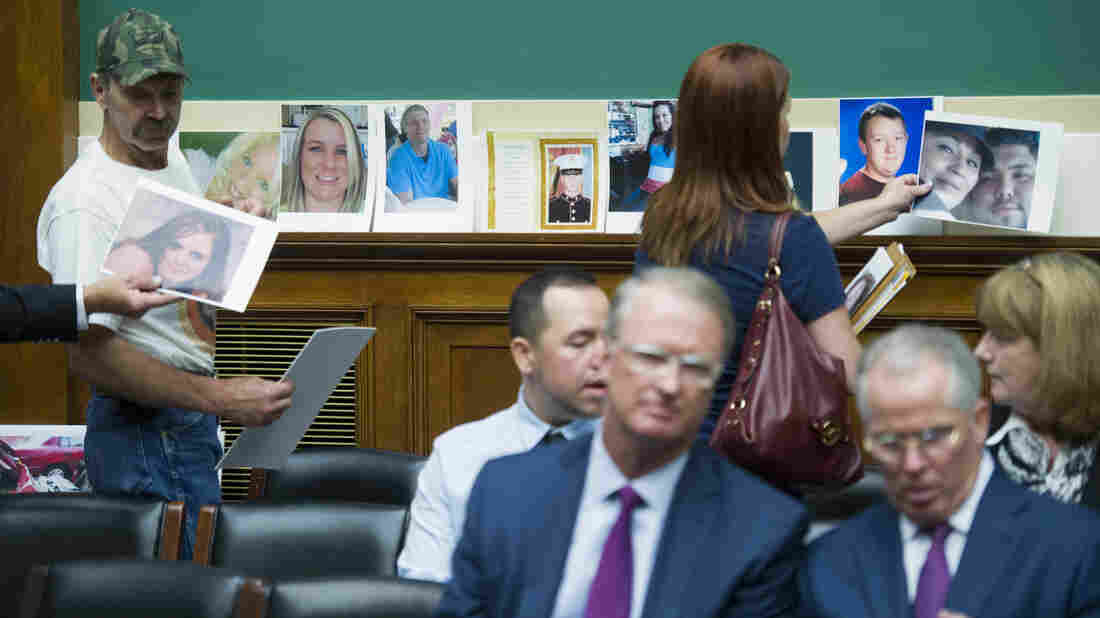 Family members of victims of a faulty GM ignition switch lined the rear wall of a congressional hearing with their photos Wednesday. Cliff Owen/AP hide caption 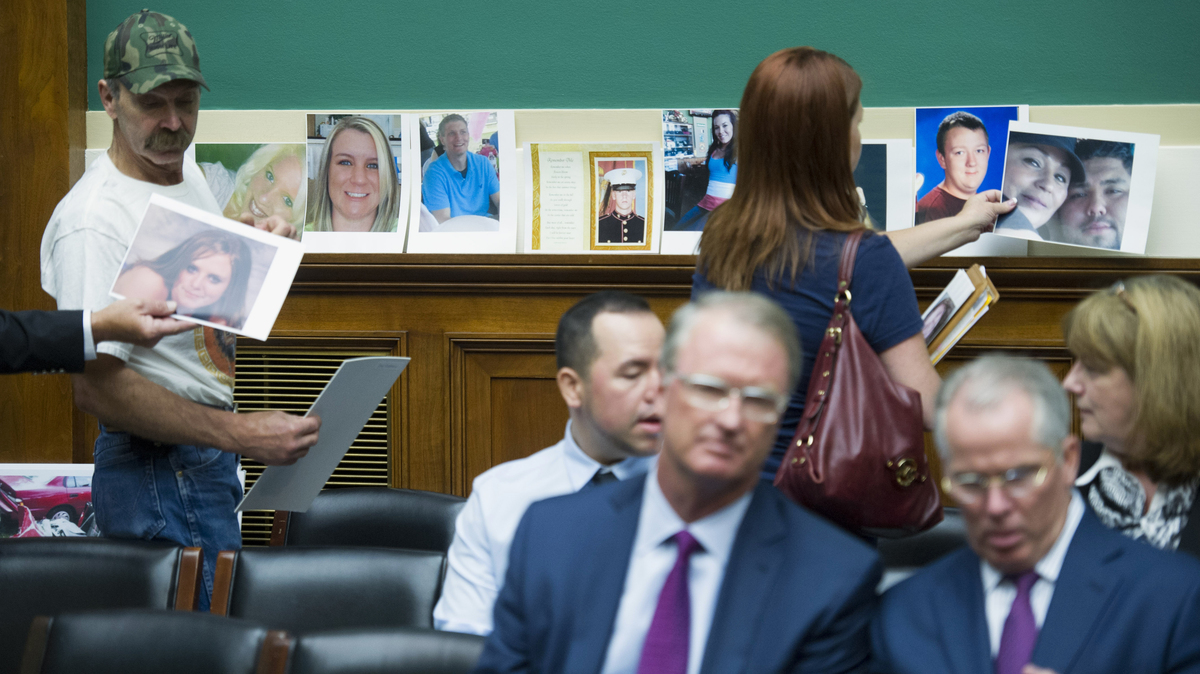 Family members of victims of a faulty GM ignition switch lined the rear wall of a congressional hearing with their photos Wednesday.

Questions about a potential cover-up and an unhealthy corporate culture dominated a congressional hearing today about General Motors' handling of a deadly safety flaw in ignition switches in millions of its cars.

GM CEO Mary Barra appeared before the House Energy and Commerce Subcommittee on Oversight and Investigations, testifying alongside Anton Valukas, a former U.S. prosecutor whom the company hired to compile a 325-page report on its handling of the safety flaw.

Members of the panel repeatedly asked versions of a question posed to Valukas by Rep. Phil Gingrey, R-Ga., about engineers and executives at GM who failed to fix the safety problem: "How could they not know?"

The incident "smacks of a big cover-up to me," Gingerey said.

Gingery's constituents include the parents of Brooke Melton, a nurse who was 29 when she died after her Chevrolet Cobalt crashed in 2010. The family's ensuing lawsuit has been credited with helping to uncover GM's failure to fix a problem it had known about for years.

Other House members were openly skeptical of GM's ability to change what Rep. Diana DeGette of Colorado called a culture of secrecy that has been blamed for keeping the flaw from being exposed and addressed.

Today's hearing comes two days after GM added an additional 3.2 million cars to the massive recall it instituted earlier this year to correct the ignition switch problem. The list of affected model years ranges from 2000 to 2011. If you're wondering if your car is involved in the recall, you can check its ID number at a GM website.

Valukas told the panel he had "unfettered" access within GM for his investigation, according to The Detroit Free Press. But he later added that he had only limited access to records and no access to employees at Delphi, a GM spinoff company that is a major parts supplier to the carmaker. 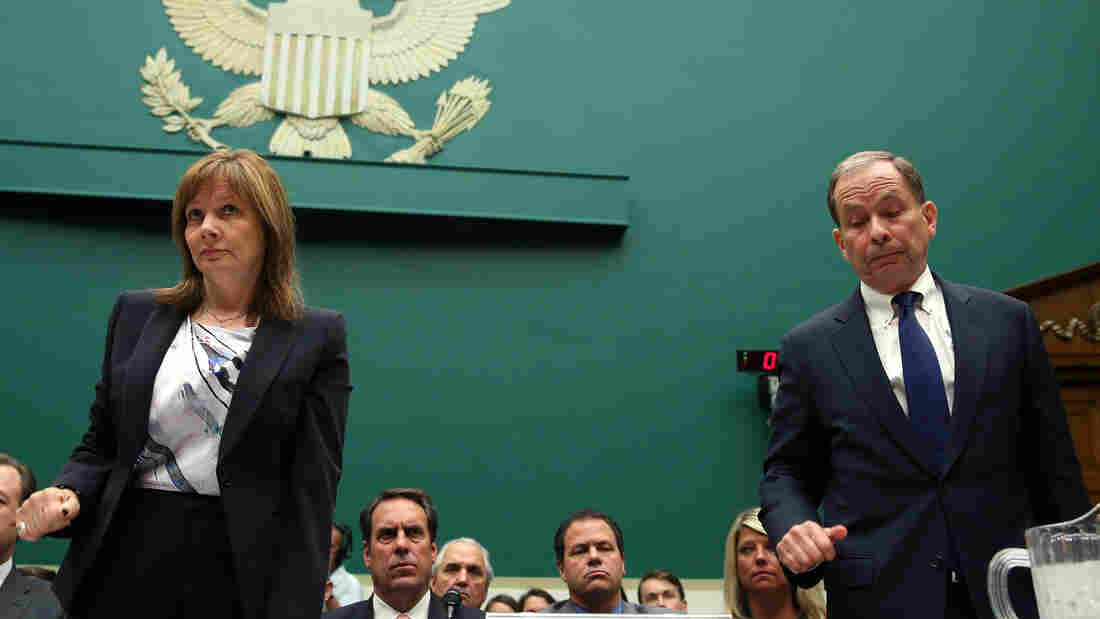 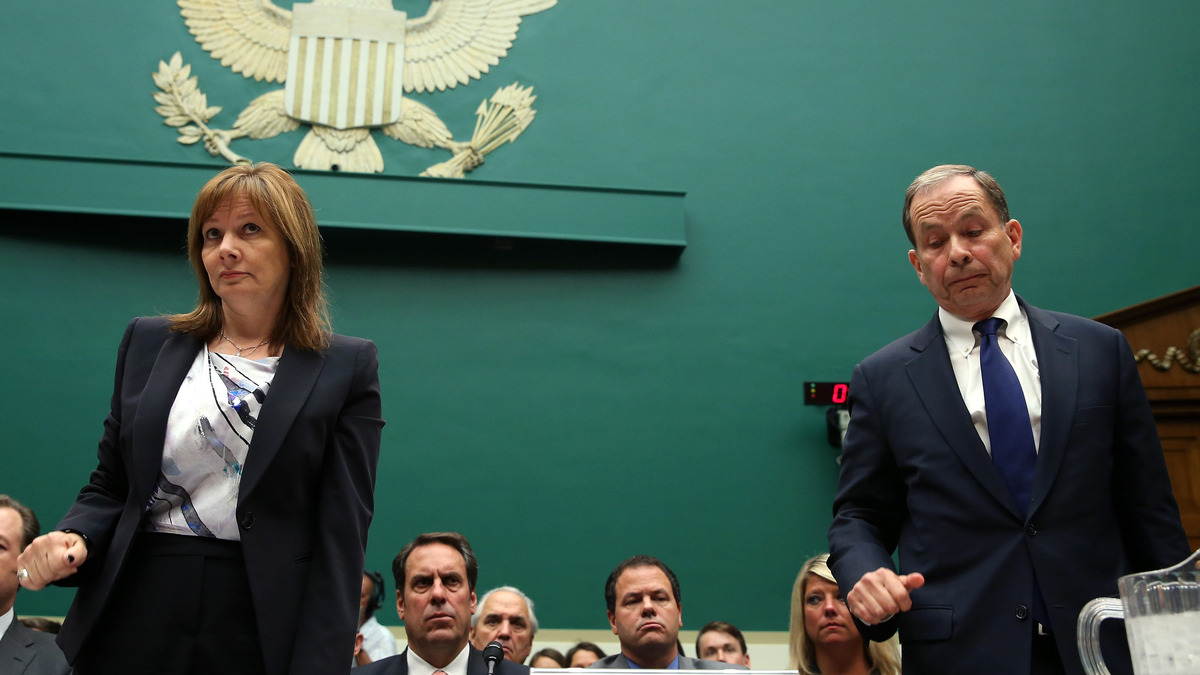 Barra did not offer any significant new details about GM's pending compensation fund for victims, saying that its structure is still being drafted by Ken Feinberg, the attorney leading the car company's effort to respond to families' claims.

"The recall, which was finally announced in February, has been linked to at least 13 fatalities," reports The Consumerist. "However, recent reports speculate as many as 74 deaths could be tied to the issue."

As Barra spoke at the hearing in the Rayburn House Office Building, TV cameras captured portraits over her shoulder – photographs lining the rear wall of the room, placed there by people who lost loved ones in crashes blamed on the safety flaw.

An hour before today's hearing, members of the victims' families addressed the media. The speakers included Robert Buzard, whose son, Trenton, was paralyzed when the Chevrolet Cobalt he was in lost power and was hit in a head-on collision. Trenton is now 6 years old.

"My son is left paralyzed from the belly button down," Buzard said, according to USA Today. "He still has a feeding tube. His vision has been impaired because of a broken eye socket. He has to live the rest of his life this way, and GM needs to accept responsibility for what they've done."

The families also attended the hearing, prompting Rep. Jan Schakowsky, a Democrat from Illinois, to say, "We're looking at the photos in the back of the room ... They need more than an apology."

That's according to the Detroit Free Press.

Nearly two weeks ago, GM issued the findings of its internal review, which Barra said showed an 11-year "history of failures." She also said 15 employees had been fired over the debacle.

One month ago, the U.S. levied a $35 million fine on GM for its handling of the recall.

You can trace the recall at our timeline that begins back in 2001.