Accessibility links
Scientists Observe Springtime Changes On One Of Saturn's Moons : The Two-Way On Titan, summer is almost three years away. But in a dark, placid ocean of natural gas, scientists have spotted something that could be the first inkling of springtime. 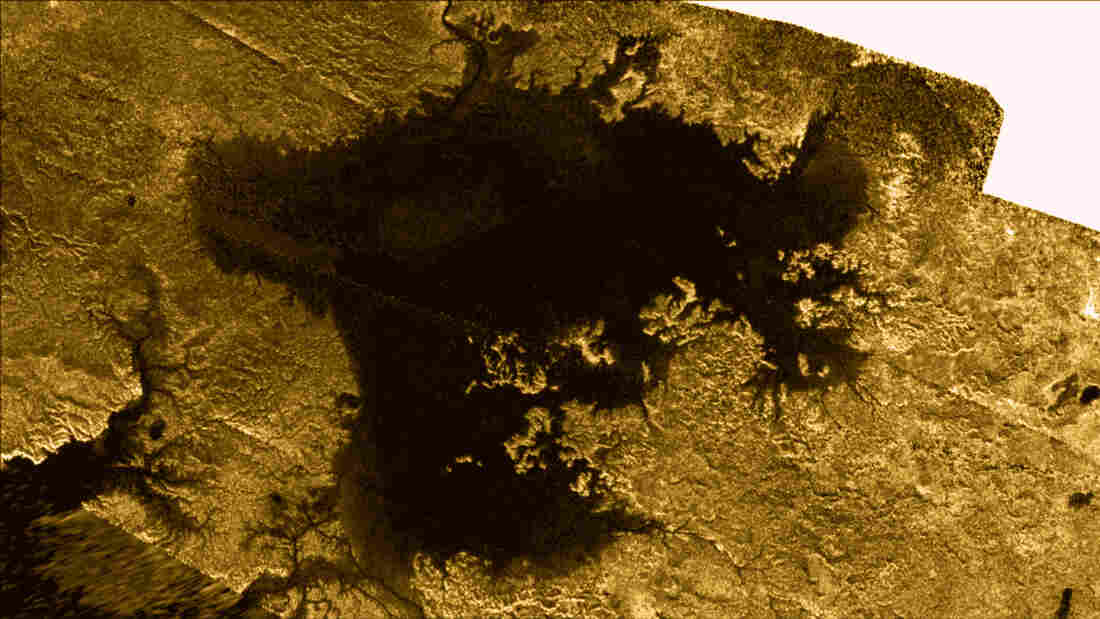 The Cassini spacecraft has been taking radar images of Titan for years now. This modified image of the Ligeia Mare, a sea on Titan's north pole, is a composite of some of those. NASA/JPL-Caltech/ASI/Cornell hide caption 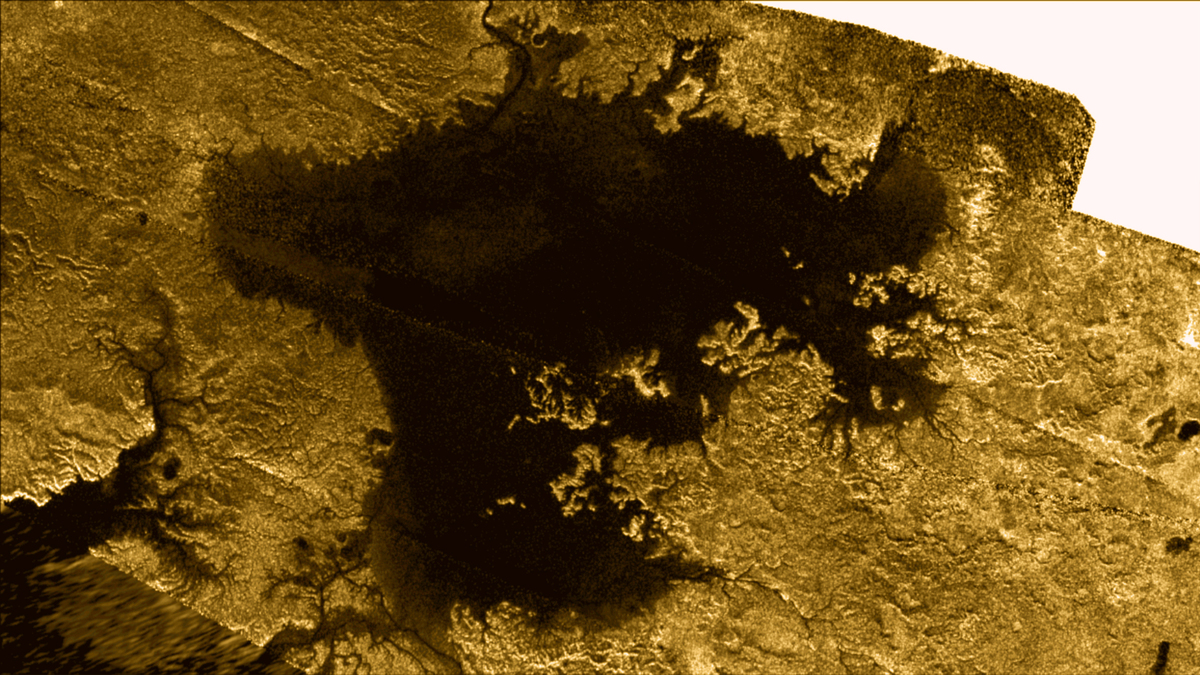 The Cassini spacecraft has been taking radar images of Titan for years now. This modified image of the Ligeia Mare, a sea on Titan's north pole, is a composite of some of those.

With its large sand dunes, rivers, big lakes and seas, Saturn's biggest moon is one of the most Earth-like planetary bodies in the solar system. But Titan is no place to call home.

The surface temperature is negative 290 degrees Fahrenheit, and each of its seasons lasts about seven Earth years. Sunsets on Titan would look orangey-brown, thanks to a thick haze that keeps light from reaching the surface. Water is scattered around as solid, icy pebbles.

It's one of Titan's northern seas that now has researchers excited — scientists say they're seeing the first signs of springtime changes even though the summer solstice is almost three years away.

The Ligeia Mare is named after a mythical siren who lured sailors to their deaths. It's cold, dark, and made of liquid natural gas. You could scoop some up and dunk it in the fuel tank of a bus.

"And up until now, we thought that it would be a quite flat and calm environment," says Jason Hofgartner, a graduate student in astronomy at Cornell University who has studied the landscape in images of Titan taken by the Cassini spacecraft, which has been orbiting Saturn for the past decade.

He and his colleagues were sifting through radar images, he says, when they noticed that "there was this essentially a bright spot, where there hadn't been a bright spot before. And then 16 days later, it wasn't there again."

Hofgartner and his fellow researchers write in the journal Nature that this bright spot coming and going is evidence of something moving in that ocean of natural gas.

The Distant Shores Of Titan Beckon

NASA's chief scientist, Ellen Stofan, says the movement could be windblown waves, bubbles from something below, or even a chunk of pumice floating on the surface like a fluffy iceberg. Whatever the thing is, she says, it's a sign of the season changing. As Titan's northern hemisphere gets more sunlight, the atmosphere is warming. Spring is in the air.

"It's around now, with the seasons changing, that the winds should be picking up, temperatures changing a little bit," Stofan says. "So, we were starting to look. On these northern seas, are we going to see changes?"

This is the first confirmed observation of such change in the northern hemisphere. Stofan says that monitoring the changes through the season will help them understand more about Titan. It could also help explain more about Earth.

"These results are just incredibly exciting because it's showing that we have this dynamic world so far out in the solar system, where we can learn about oceanography and climate," Stofan says.

Titan's seas may be made of a bizarre material, but the physics governing them are the same as those on our own planet.

"It's behaving exactly the way water does here on Earth," Stofan explains. "What an opportunity to learn more about the liquid cycles that we have here on Earth. Now we've got somewhere to compare it to."

The researchers expect to see more signs of movement on Titan's seas as its summer approaches in 2017.