Accessibility links
Aereo's TV Streaming Service Is Illegal, Supreme Court Says : The Two-Way The court's 6-3 decision reverses a lower court ruling on what has been a hotly contested issue. Aereo lets subscribers watch TV programming that it routes onto the Internet. 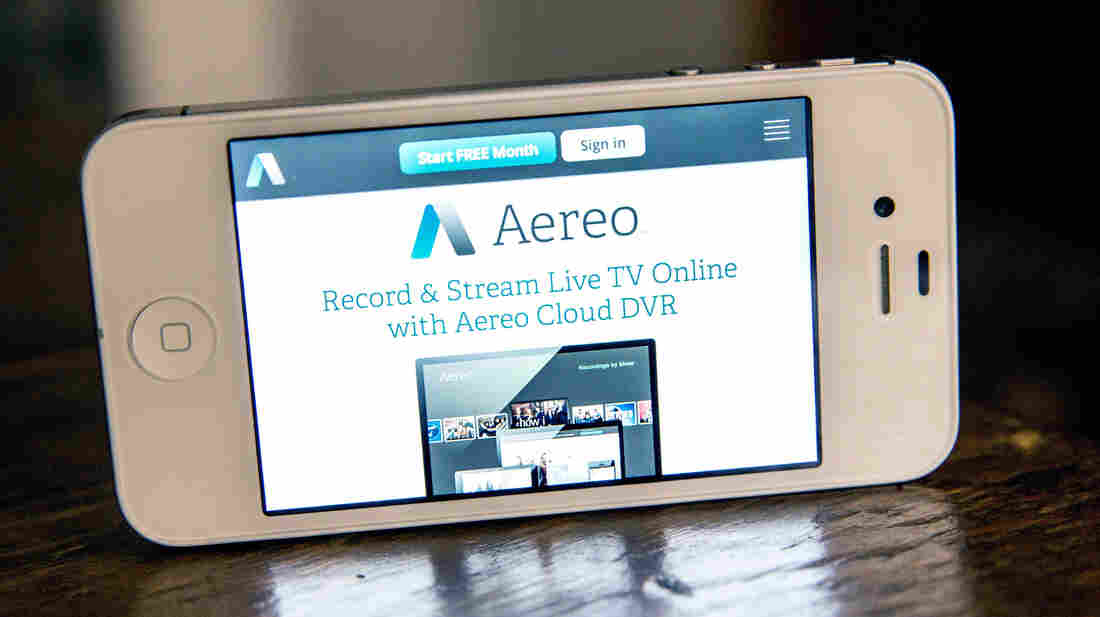 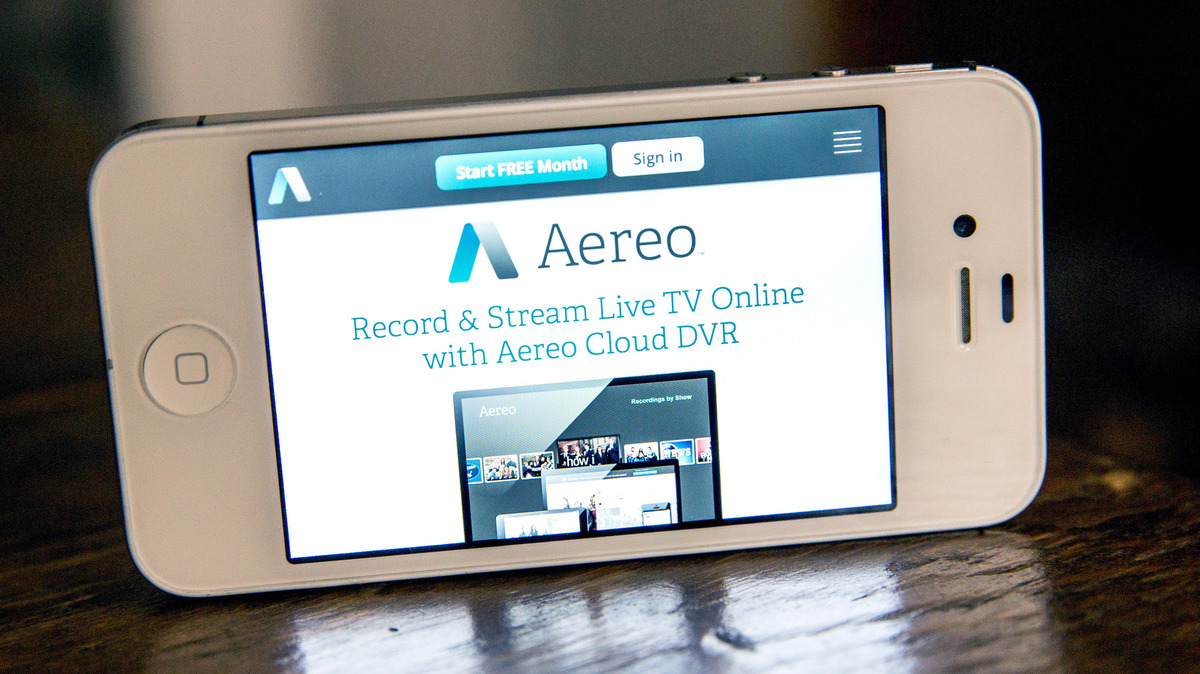 Aereo.com, a Web service that provides television shows online, is shown on an iPhone on April 22. The company lost a Supreme Court case Wednesday, as the justices ruled it violates copyright law.

Aereo, the company that lets subscribers watch TV stations' video that it routes onto the Internet, violates U.S. copyright law, the Supreme Court has ruled. The court's 6-3 decision reverses a lower court ruling on what has been a hotly contested issue.

"So serious is the economic threat that two major networks, CBS and Fox, have said they would consider abandoning over-the-air free broadcasting if they lose," NPR's Nina Totenberg reported when the case was argued in April, "and instead broadcast only on pay cable channels."

The plaintiffs in the case were TV producers, marketers and broadcasters who said Aereo violated their copyrights by streaming programs online without a license. Aereo has defended its business model, saying it pulls in content that is broadcast freely, using many small antennas — one per subscriber — and that it serves the programs up only upon users' requests. The Supreme Court didn't agree with that view.

"Aereo performs petitioners' works publicly," the court ruled. The justices said the company is similar to a cable TV provider, selling a service that "allows subscribers to watch television programs, many of which are copyrighted, virtually as they are being broadcast."

Calling the court's decision "a massive setback for the American consumer," Aereo CEO Chet Kanojia says it is "troubling" to see the majority opinion's suggestion that companies seek action from Congress to clarify how new technology interacts with U.S. copyright laws.

"Are we moving towards a permission-based system for technology innovation?" Kanojia asks.

The tone was different over at the Walt Disney Co., parent company of ABC, which led the lawsuit.

Now that we've had time to read through more of the opinion, we can add more details.

Justice Stephen Breyer wrote the court's majority opinion, saying, "Given the limited nature of this holding, the Court does not believe its decision will discourage the emergence or use of different kinds of technologies."

Dissenting in the case were Justices Antonin Scalia, Clarence Thomas and Samuel Alito. In their opinion, written by Scalia, the justices said TV networks and affiliates who sued Aereo on the grounds that the company performs their works publicly were wrong "because Aereo does not 'perform' at all."

'Unlike video-on-demand services, Aereo does not provide a prearranged assortment of movies and television shows," Scalia wrote. "Rather, it assigns each subscriber an antenna that — like a library card — can be used to obtain whatever broadcasts are freely available."

Congress might look at ways to update the copyright law to take new technological innovations into account, Scalia wrote, "but it is not our job to apply laws that have not yet been written."

In March, Chet Kanojia, the founder and CEO of Aereo, told NPR's Elise Hu that his company welcomed the high court's scrutiny — "because it was very obvious that the strategy for the other side was to kill us by suing us in every possible jurisdiction. It's better strategically for us to force the issue now."

He also said his company was a response to out-of-date distribution systems.

"There is no logic in me paying for 500 channels that I don't watch," Kanojia said. "There is no incentive on the incumbents to change, so it takes somebody like us ... to come in and say, this is the trend, life is changing. The Internet is happening to us whether we like it or not."