Accessibility links
Beijing Blasts U.S. Plan To Name Road By Embassy After Dissident : The Two-Way An amendment working its way through Congress would rename the street in front of the Chinese Embassy after Nobel Peace Prize laureate Liu Xiaobo. China called it a "sheer farce." 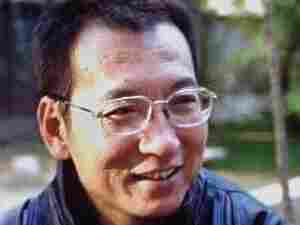 An undated photo provided by Voice of America shows Chinese dissident Liu Xiaobo, who won the 2010 Nobel Peace Prize. He was jailed in 2008 for promoting human rights. An amendment in Congress proposes renaming the street in front of the Chinese Embassy in Washington, D.C., in his honor. AP hide caption

Beijing is fuming over a provision slipped into a State Department budget to change the name of the street fronting the Chinese Embassy in Washington to "Liu Xiaobo Plaza," in honor of the jailed dissident and Nobel Peace Prize laureate.

The amendment, proposed by Virginia Republican Rep. Frank Wolf, would change the name of the street currently known as International Place. Wolf says it would send "a clear and powerful message that the United States remains vigilant and resolute in its commitment to safeguard human rights around the globe."

It was attached to the State Department's yearly spending bill, which was approved by a House panel on Tuesday. It still must pass the full chamber as well as the Senate before the name change can go forward.

China's Foreign Ministry called the move "nothing more than a sheer farce" that was "meaninglessly hyping the so-called human rights issue and the case of Liu Xiaobo."

Liu, a writer, professor, literary critic and human rights activist, was first jailed for his participation in the 1989 Tiananmen Square protest. He was arrested again in 2008 for signing the so-called Charter 08 manifesto, which called for greater freedoms in China. He was first placed under house arrest and in 2010 moved to Jinzhou Prison. Liu was awarded the Nobel later that year.

If the name change is approved, it wouldn't be the first time that a U.S. street address for a foreign embassy was changed to recognize a dissident. In 1984, the block in Washington, D.C., along 16th Street NW between L and M streets in front of the then-Soviet Embassy was changed to "Andrei Sakharov Plaza" after the nuclear physicist turned critic of Moscow, who was awarded the Nobel Peace Prize in 1975.

Renaming the street after Liu "would raise the price on China for imprisoning dissidents and democracy advocates like Liu Xiaobo," said David Keyes, executive director of the group Advancing Human Rights, quoted in The South China Morning Post.

"It's symbolic and it may seem small, but if we can remind every Chinese diplomat around the world about the cost of their tyranny and if we can give hope to dissidents throughout China's prisons, I think it can play a significant role in pressuring China to release political prisoners and open up," Keyes said.