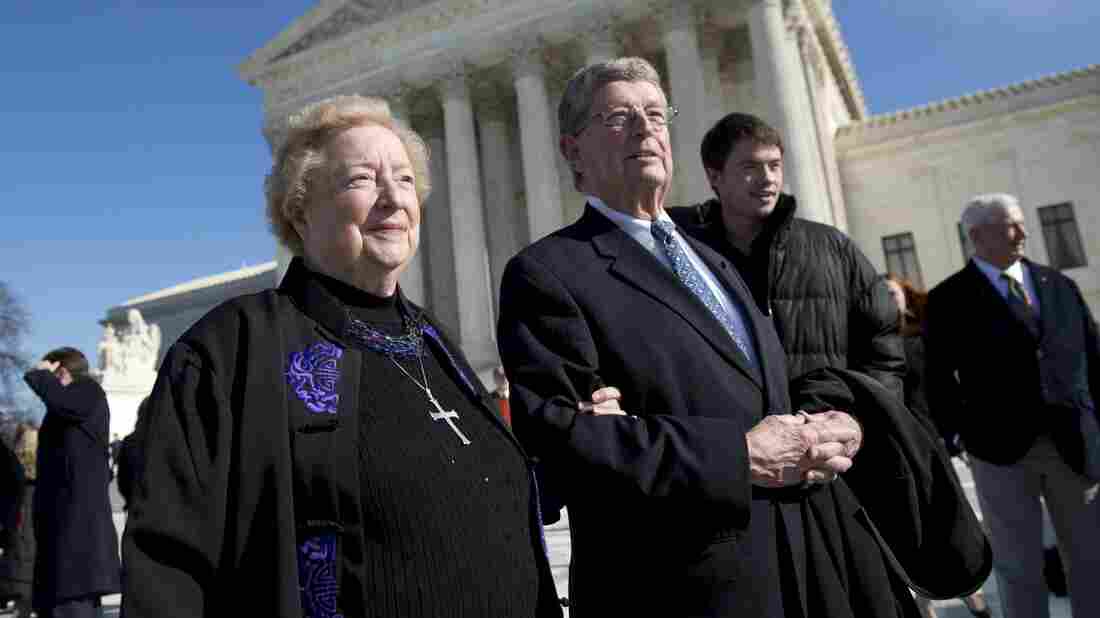 Eleanor McCullen and her attorney, Philip Moran, stand outside the Supreme Court in January after arguments in the case of McCullen v. Coakley. Saul Loeb/AFP/Getty Images hide caption 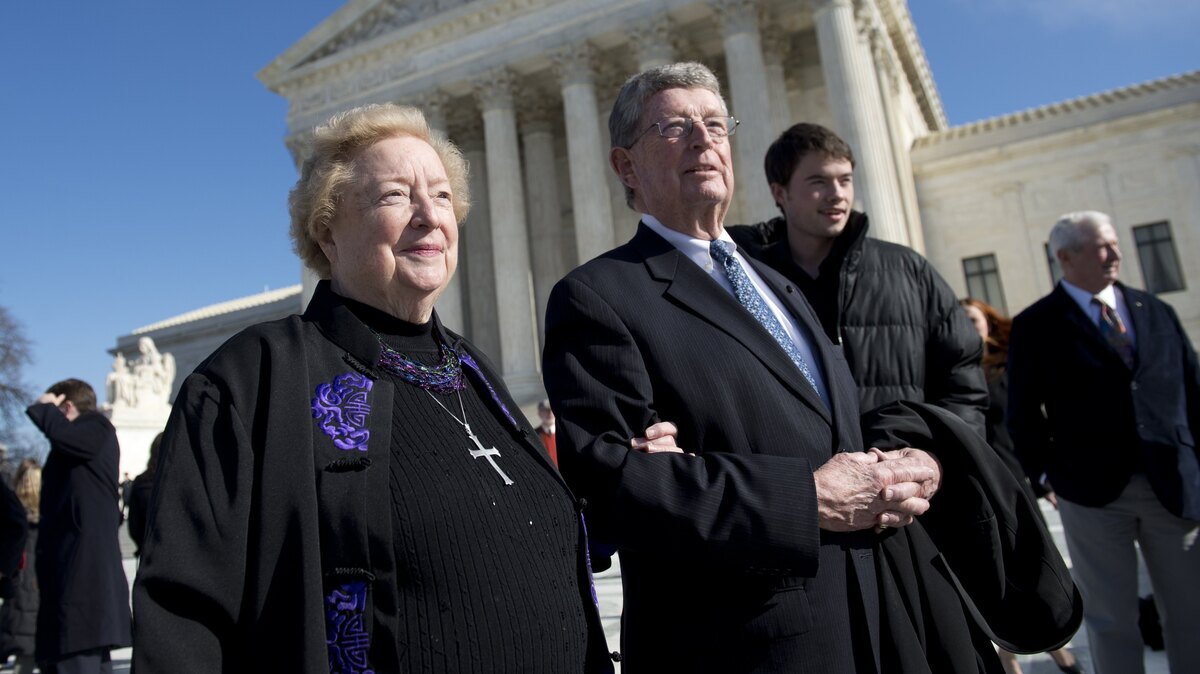 Eleanor McCullen and her attorney, Philip Moran, stand outside the Supreme Court in January after arguments in the case of McCullen v. Coakley.

The Supreme Court has struck down a Massachusetts law mandating a 35-foot buffer zone around clinics that provide abortion services.

Backers of the legislation have said the law treats groups equally, requiring both supporters and opponents of abortion rights to maintain their distance from the clinics. But in a unanimous ruling Thursday, the justices found that the buffer zone infringes on the First Amendment rights of protesters.

From the law experts at SCOTUSblog:

"The upshot of today's ruling is that an abortion clinic buffer zone is presumptively unconstitutional. Instead, a state has to more narrowly target clinic obstructions. For example, the police can tell protesters to move aside to let a woman through to the clinic. But it cannot prohibit protesters from being on the sidewalks in the first instance."

When the Massachusetts case was argued before the justices back in January, NPR's Nina Totenberg noted that buffer zones have become common since a Supreme Court ruling 14 years ago that upheld 8-foot buffer zones that move with individuals as they walk into clinics.

Nina notes that in Massachusetts, "two people were shot and killed and five others were wounded at abortion clinics in 1994. After first trying a moving, 'no approach' buffer zone, the state in 2007 adopted a fixed, stationary 35-foot buffer zone outside clinics."

The case pitted plaintiffs led by Eleanor McCullen against Massachusetts and its attorney general, Martha Coakley. The Supreme Court ruling against the law comes after the petitioners in the case were dealt losses in both a district court and the court of appeals.

While the justices were unanimous in their votes today, they were split in their reasoning — with Chief Justice John Roberts writing one opinion, Justice Antonin Scalia writing another (joined by Justices Anthony Kennedy and Clarence Thomas), and Judge Samuel Alito penning a third.

Roberts wrote that because the law regulates public sidewalks that have special speech protections as places for discussion and debate, it also restricts access to a public forum.

With its buffer zone law, Massachusetts took "the extreme step of closing a substantial portion of a traditional public forum to all speakers," Roberts wrote in his opinion.

"Even though the Act is content neutral, it still must be 'narrowly tailored to serve a significant governmental interest,' " Roberts wrote, citing a precedent.

Roberts said that as an alternative approach, Massachusetts could consider an ordinance such as one adopted in New York City that "makes it a crime 'to follow and harass another person within 15 feet of the premises of a reproductive health care facility.' "

The state could also adopt a law that makes it illegal to attempt to injure, intimidate or interfere with anyone because they're either coming from or heading toward a health clinic, he said.

Thursday's ruling on buffer zones was announced on the heels of another long-awaited decision, over the president's power to make recess appointments.