Accessibility links
Sunni Extremist Group ISIS Declares New Islamic Caliphate : The Two-Way Some analysts says the move may signal the birth of a new era of transnational jihadism. ISIS also announced a name change: It will now be known simply as The Islamic State.

The Islamic State of Iraq and Syria, the Sunni militant group that's been leading an insurgency in Iraq, made a bold statement today: The organization's Shura Council has declared a new caliphate, and the organization's extremist leader, Abu Bakr al-Baghdadi, is the new caliph. 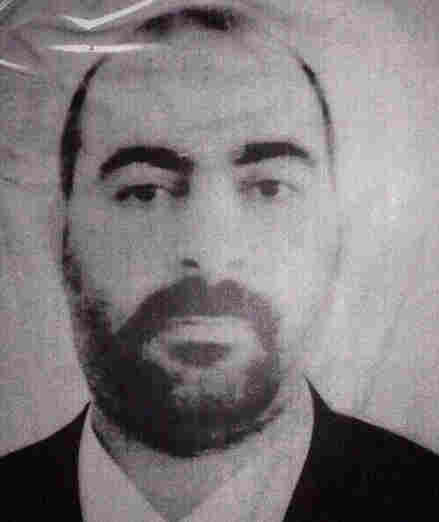 The official website of Iraq's Interior Ministry claims this picture shows Abu Bakr al-Baghdadi, the head of the so called Islamic State of Iraq and Syria. Uncredited/AP hide caption

As Al-Jazeera explains, the caliphate refers to a "system of rule that ended nearly 100 years ago with the fall of the Ottoman empire." According to the network's reading of the statement, the new caliphate "stretches from Iraq's Diyala province to Syria's Aleppo."

But this declaration, delivered by the group's chief spokesman Abu Mohammed al-Adnani, could mean much more. Charles Lister, a visiting fellow at the Brookings Doha Center who specializes in counterterrorism and insurgencies, said this could signal the birth of a new era of transnational jihadism.

As NPR's Dina Temple-Raston explained last week, just below the surface in ISIS' battle for Iraq is a clash between two "arch-terrorists": the head of al-Qaida's central operation, Ayman al-Zawahri, and al-Baghdadi, whose organization was banished by al-Qaida over tactics.

As Lister explains, the declaration issued today (you can listen to it here) means that "all jihadist organizations are now abolished ... [and] must pledge bay'a [allegiance] to Baghdadi."

In an email Lister goes on to say that this is essentially a declaration of war by Baghdadi against Zawahri. Over the next few hours and days, organizations will begin to pledge allegiance.

"Al-Qaeda will retain considerable support and once the dust has settled, we will very likely find ourselves in a dualistic position of having two competing international jihadist representatives –- Al-Qaida, with a now more locally-focused and gradual approach to success; and the Islamic State, with a hunger for rapid results and total hostility for competition," Lister says.

The AFP says Baghdadi was born in Samarra in 1971. He joined the insurgency after the U.S. invaded Iraq and at one point spent time in an American military prison. In 2005, U.S. forces said they had killed Baghdadi, but that was obviously incorrect.

Baghdadi is believed to have taken a leadership role in ISIS in 2010. The AFP adds:

"Since then, details about him have slowly trickled out.

"In October 2011, the US Treasury designated him as a "terrorist", and this year, Iraq released a picture they said was of Baghdadi, the first from an official source, depicting a balding, bearded man in a suit and tie.

"US officials said last year that the jihadist was likely in Syria, but information of his whereabouts since has been unclear."

ISIS also said that it will now be known simply as the Islamic State.