Accessibility links
Protesters Turn Back Buses Of Immigrant Detainees Near San Diego : The Two-Way The buses were carrying nearly 140 people who had reportedly crossed the border in Texas. The protest drew a counterprotest by advocates for immigrants.

Protesters Turn Back Buses Of Immigrant Detainees Near San Diego

Protesters Turn Back Buses Of Immigrant Detainees Near San Diego 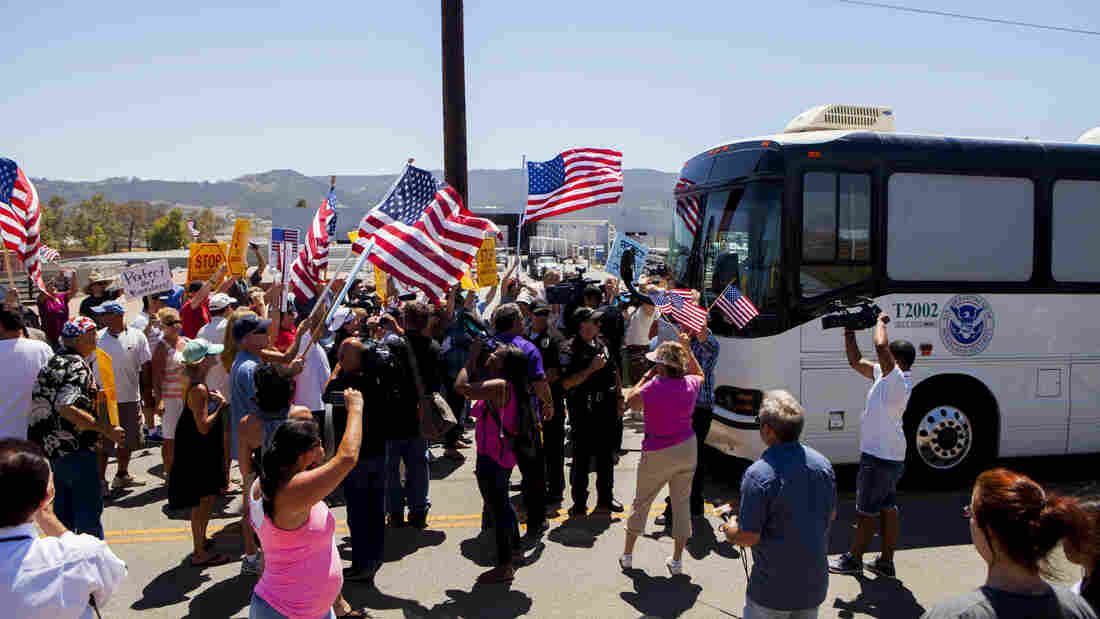 Protesters block the arrival of immigrant detainees who were scheduled to be processed at the Murrieta Border Patrol station in California on Tuesday. Sam Hodgson/Reuters/Landov hide caption 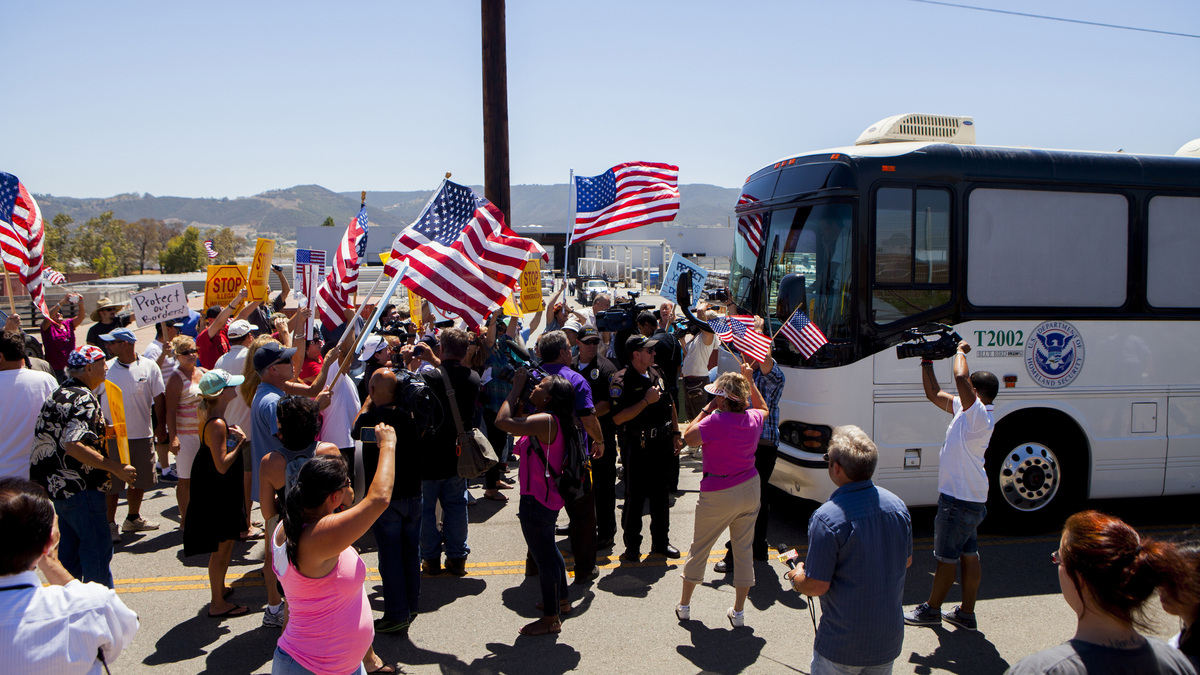 Protesters block the arrival of immigrant detainees who were scheduled to be processed at the Murrieta Border Patrol station in California on Tuesday.

A plan to move immigrant detainees to a Border Patrol facility north of San Diego has set off protests and counterprotests this week, as residents and activists argue over how to treat people caught entering the U.S. illegally.

Three buses that were carrying nearly 140 migrants to a processing center were forced to turn around Tuesday, after their path was blocked by protesters urged on by the mayor of Murrieta, Calif. The migrants, mostly women and children, had reportedly crossed the border in Texas and were then flown to San Diego.

Carrying signs bearing messages such as "Return to Sender" and "America Has Been Invaded," more than 100 protesters reportedly took part in Tuesday's rally against the Border Patrol operation, according to San Diego member station KPBS.

As the buses approached the Murrieta Border Patrol station, the protesters chanted "Go home" and "We want to be safe," according to the Los Angeles Times, which also notes that the protest went on without violence.

The scene drew a counterprotest by advocates for immigrants, who said they were planning a rally Wednesday "to show their support for the migrant families from Central America," KPBS reports today.

The station quotes an advocate who condemned Tuesday's protest:

" 'What I witnessed today in Murrieta as the three buses of children and mothers arrived was very sad, and the worst of the American Spirit,' Border Angels director Enrique Morones said in a news release.

" 'These children could hear the racist taunts, hear the sign banging the bus and seeing the Murrieta Police Department stand by,' Morones said."

The immigrants had initially been caught by U.S. agents as they attempted to cross into Texas. The Department of Homeland Security then flew them to California "for processing and supervised release through a religious volunteer group, pending appearances in immigration court," the Times says.

The plan was created as a way to ease congestion in crowded Texas facilities, but it was hotly disputed by residents of Murrieta. Eventually, the buses took the women and children to another facility some 70 miles away, in Chula Vista, KPBS says. The station also reports that the federal government could bring more migrants to Southern California within days.

As we've reported, there's a growing number of people from Central America who are illegally crossing the Southern U.S. border. Many say they are fleeing violence and poverty. 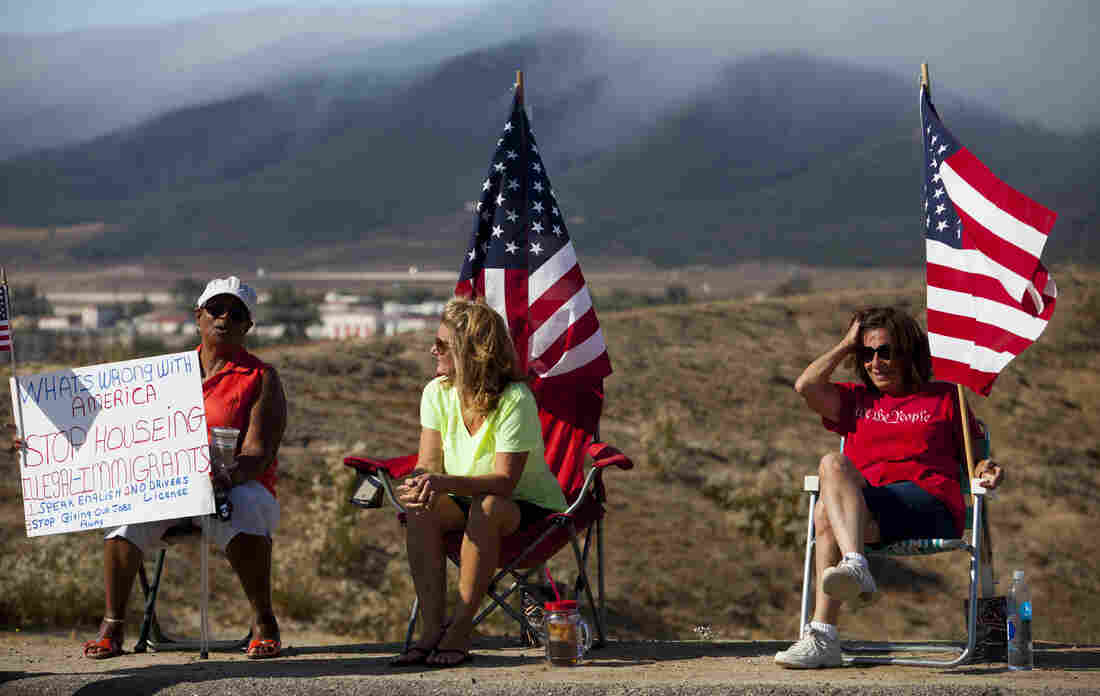 Demonstrators picket the pending arrival of undocumented immigrants who were to be processed at the Murrieta Border Patrol station. Sam Hodgson/Reuters/Landov hide caption 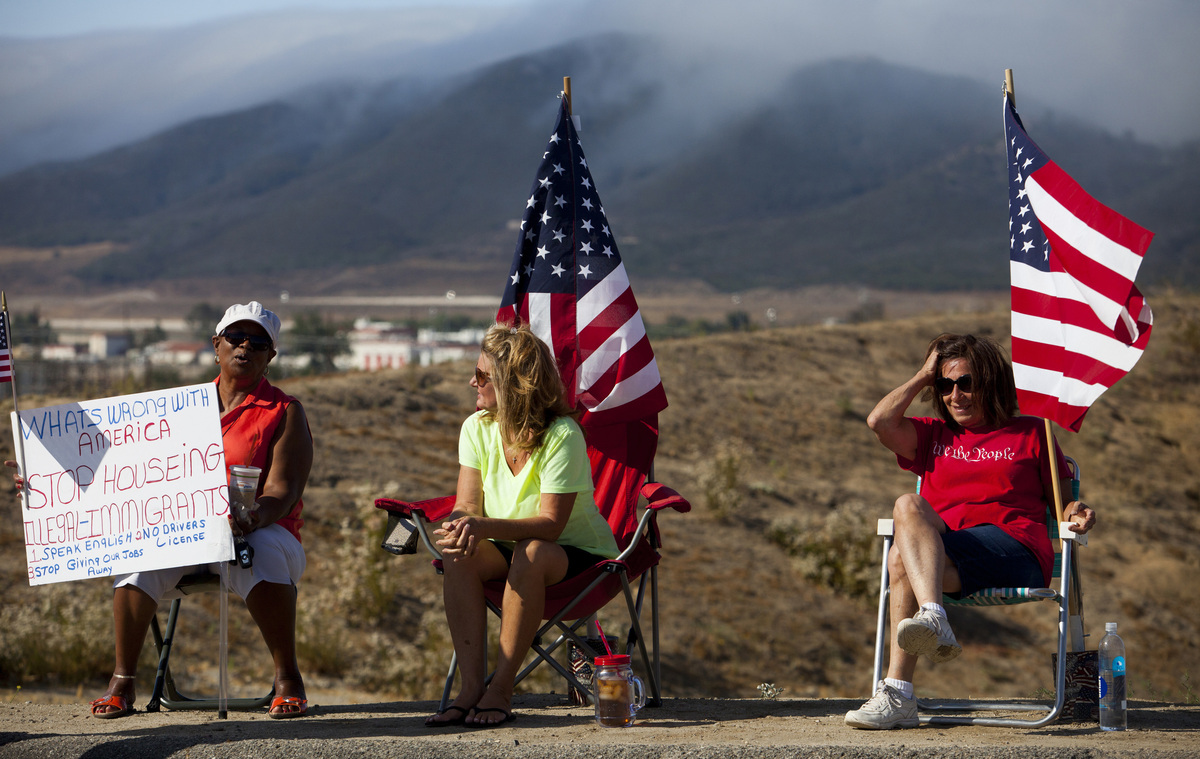 Demonstrators picket the pending arrival of undocumented immigrants who were to be processed at the Murrieta Border Patrol station.