Accessibility links
Washington State To Start Recreational Pot Sales On Tuesday : The Two-Way The state's Liquor Control Board issued the first 24 marijuana retailer licenses on Monday. Washington is the second state — after Colorado — to allow the sale of recreational marijuana. 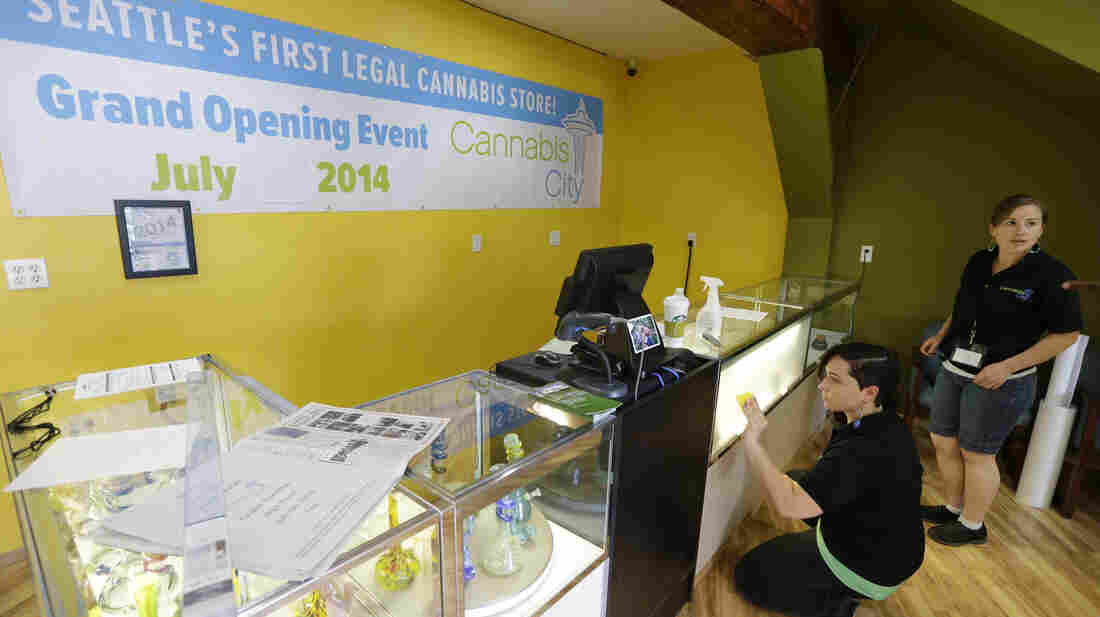 Amber McGowan, left, and Krystal Klacsan work Monday at Cannabis City in Seattle, a day before the store is to begin legal pot sales on Tuesday. The store will be for now the only one in Seattle to sell recreational marijuana. Ted S. Warren/AP hide caption 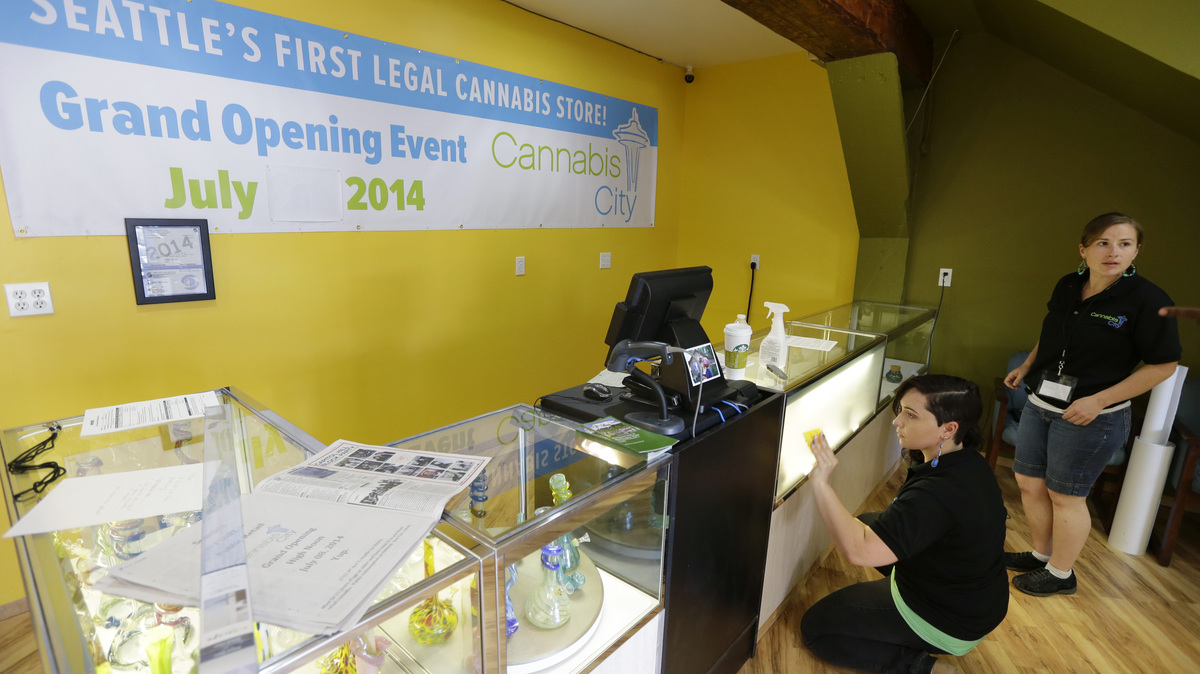 Amber McGowan, left, and Krystal Klacsan work Monday at Cannabis City in Seattle, a day before the store is to begin legal pot sales on Tuesday. The store will be for now the only one in Seattle to sell recreational marijuana.

Legal marijuana sales are set to begin in Washington state as early as Tuesday after authorities began issuing retail licenses to stores.

The state's Liquor Control Board issued Monday the first 24 marijuana retailer licenses, the board said in a statement. The stores can now stock up on marijuana products and begin sales on Tuesday after the mandated 24-hour "quarantine" period.

Here's more from the panel:

"Businesses receiving their licenses today represent the first of 334 licenses allotted by the WSLCB for retail sales who have successfully completed the licensing process. Locations receiving licenses were selected by taking into account population, geographic dispersion and the individual applicant's readiness to be licensed."

The Associated Press reports that the board licensed 14 stores in western Washington and 10 in the eastern part of the state. It adds: "Spokane has three stores. Vancouver, Tacoma and Bellingham each have two. Seattle and the other cities on the list have one each."

What time the stores will open is likely to vary.

An investor in Top Shelf Cannabis in Bellingham said the store would be open at 8 a.m., but he told the AP work remained to be done.

The state is the second to legalize recreational marijuana. Colorado began sales Jan. 1. The pent-up demand is expected to cause shortages. USA Today reports:

"All that demand is expected to cause significant pot shortages and prices to temporarily skyrocket in the short term as growers match supply and buyers adjust to a system where marijuana is legally bought and sold from state-regulated stores. ...

"Like Colorado, Washington state expects to see tight supplies in the initial days of legalization. In Colorado, for instance, prices for an ounce of high-grade marijuana rose past $300 in the first few days of January as lines snaked around the block at some stores and retailers blocked large purchases. Over the July 4 weekend, however, one large chain of Colorado marijuana stores was selling ounces for $85, plus tax."

Although possession of marijuana is illegal under federal law, the Justice Department has instructed prosecutors not to focus on marijuana users but instead on cartels, criminal enterprises and those who sell the drug to children.