Accessibility links
Ukraine Accuses Rebels Of Destroying Evidence At MH17 Crash Site : The Two-Way U.S. and European officials worry that evidence pointing to the cause of the crash could be altered or removed, and that bodies exposed to the elements are beginning to decay. 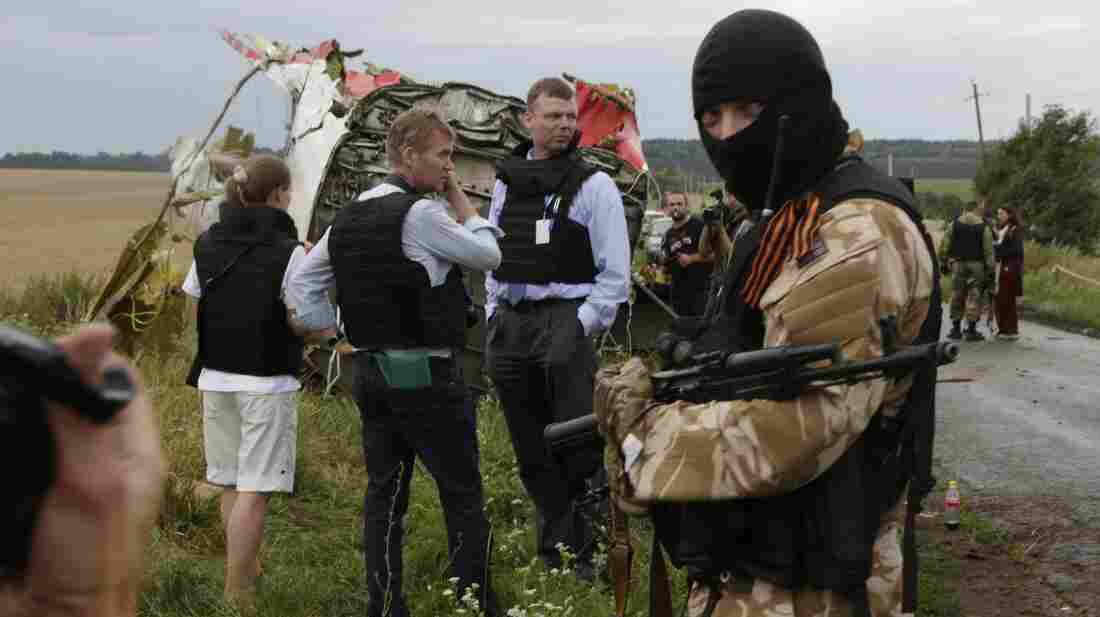 With pro-Russian separatists standing guard, investigators from the OSCE arrive at the crash site of the Malaysia Airline jet near the village of Hrabove in Eastern Ukraine on Friday. Dmitry Lovetsky/AP hide caption 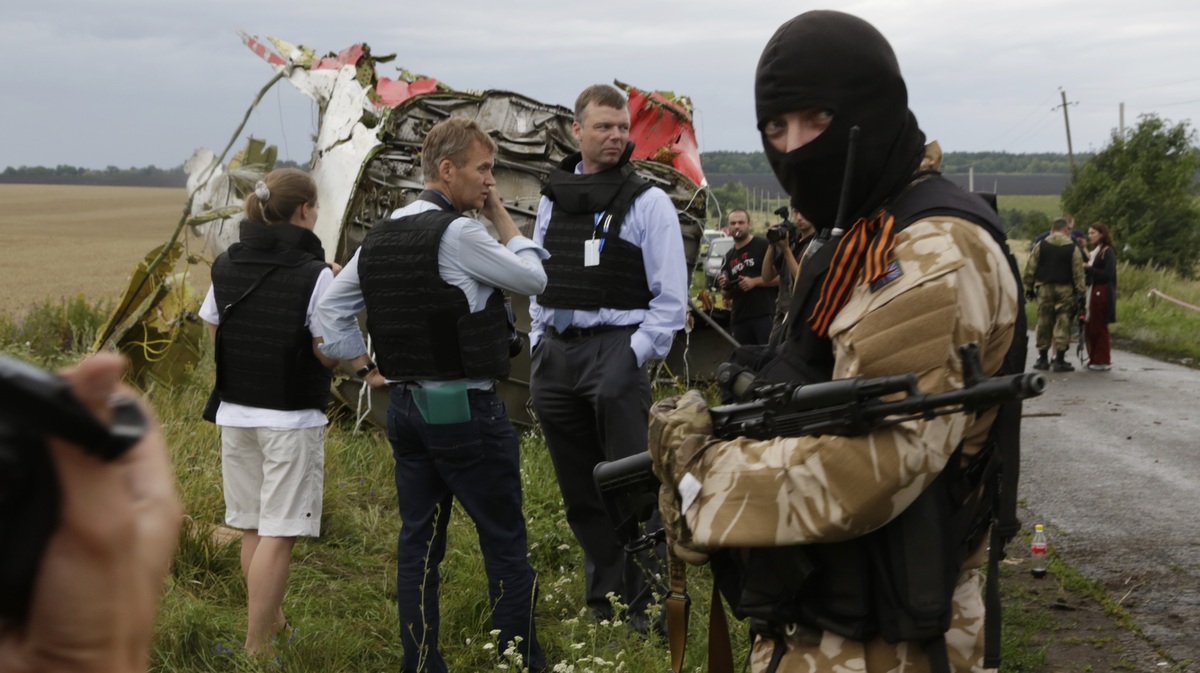 With pro-Russian separatists standing guard, investigators from the OSCE arrive at the crash site of the Malaysia Airline jet near the village of Hrabove in Eastern Ukraine on Friday.

International investigators say armed rebels have limited their inspection of the Eastern Ukraine site of the downed Malaysian Airlines flight that killed nearly 300 passengers and crew, as Kiev accused pro-Russian separatists of destroying evidence at the scene.

Malaysia Airlines on Saturday released a list of names of the dead from Thursday's crash. All 298 aboard the Boeing 777 were killed. Flight MH17 was en route from Amsterdam to Kuala Lumpur when it crashed in a rebel-held area near Donetsk, likely shot down by a surface-to-air missile fired from separatist-held territory, U.S. officials have said.

Kiev has said it has "compelling evidence" that Russians were on the crew of a missile battery believed to have shot down the plane, but did not present any information to back up the claim.

Some two dozen observers from the Organization of Cooperation and Safety in Europe say they were only allowed into a small area of the crash site for just over an hour, according to the BBC. One OCSE member said the team was confronted by a "visibly intoxicated guard" who fired shots into the air.

The rebels have denied that they are blocking access. Separatist leader Aleksander Borodai said his fighters had not touched the site, despite video of masked men shown rifling through wreckage and moving bodies.

In a statement, the Ukrainian government said rebels had removed 38 bodies from the crash site with the help of Russian specialists. It said rebels were also "seeking large transports to carry away plane fragments to Russia," without elaborating.

Prime Minister Mark Rutte of the Netherlands, which lost nearly 200 of its citizens in the crash, said he was shocked by the "utterly disgraceful behavior" at the crash site. Rutte said he had a "very intense" phone call with Russian President Vladimir Putin over the matter.

Malaysia's Transport Minister Liow Tiong Lai says "the integrity of the site has been compromised, and there are indications that vital evidence has not been preserved in place."

Russia's Foreign Ministry issued a statement appealing to both sides in the Ukrainian conflict to do "everything possible to enable access for international experts."

The crash site and debris, which spreads over miles of fields and farmland, are still unsecured and bodies lie exposed to the elements — some still strapped to seat belts and wearing inflight headphones, CNN reports.

At a news conference in Kiev, Ukraine's intelligence chief, Vitaly Nada, said his government has "compelling evidence that this terrorist act was committed with the help of the Russian Federation.

"We know clearly that the crew of this system were Russian citizens," Nada said. Moscow has denied any involvement in the shooting down of the plane, as have pro-Russian separatists.

Ukraine Prime Minister Arseny Yatseniuk told German newspaper Frankfurter Allgemeine Sonntagszeitung that to launch the SA-11 missile thought to have brought down the plane requires a "very professional staff," and, in an apparently derogatory reference to the rebels, could not, he said, be operated "by drunken gorillas."

Securing evidence at the site is crucial to determining exactly who and what caused the crash. Workers also need to recover and identify the bodies, but the OCSE observers are not trained for that job and local emergency workers say it's not their job either.

National Transportation Safety Board and FBI teams are on their way to the country, NPR's David Schaper tells our Newscast desk. However, they are likely to find the same barriers as the OCSE officials, he says.

As former NTSB Chairwoman Deborah Hersman tells NPR, "There are a lot of challenges here, I think chief among them is probably the war zone that they're in, and just the very nature of what the people on the ground are facing."

The bodies are starting to bloat and decay and need to be recovered quickly, OSCE spokesman Michael Bociurkiw tells The Guardian. "We will keep coming back tomorrow and the next day and the next day."

-- Although early reports indicated that some 100 AIDS researchers and advocates may have been aboard MH17 en route to an international conference in Melbourne, Australia, the International AIDS Society issued a statement on Saturday drastically lowering the number. It said "at least six" delegates were on board the ill-fated flight.

-- Secretary of State John Kerry, in a telephone call with Sergei Lavrov, his Russian counterpart, expressed that the United States is "very concerned" over reports that wreckage and remains had been moved or tampered with. He also discussed allowing OSCE monitors "proper access" to the crash site.

-- A statement from the Kremlin on Saturday says that in telephone conversation between Putin and German Chancellor Angela Merkel, the two leaders agreed that hostilities in Ukraine's southeast must be stopped immediately, peace talks begun, and the crash site opened to investigators. Merkel reportedly urged Putin to use his influence on the separatists.

-- Interpol and its European counterpart, Europol, will dispatch a seven-member team to the crash site.