Accessibility links
Flight MH17: Black Boxes And Bodies Handed Over; U.N. Calls For Inquiry : The Two-Way In a late-night exchange, pro-Russian separatists have given what they say are Malaysia Airlines Flight MH17's data recorders to Malaysian officials in eastern Ukraine. 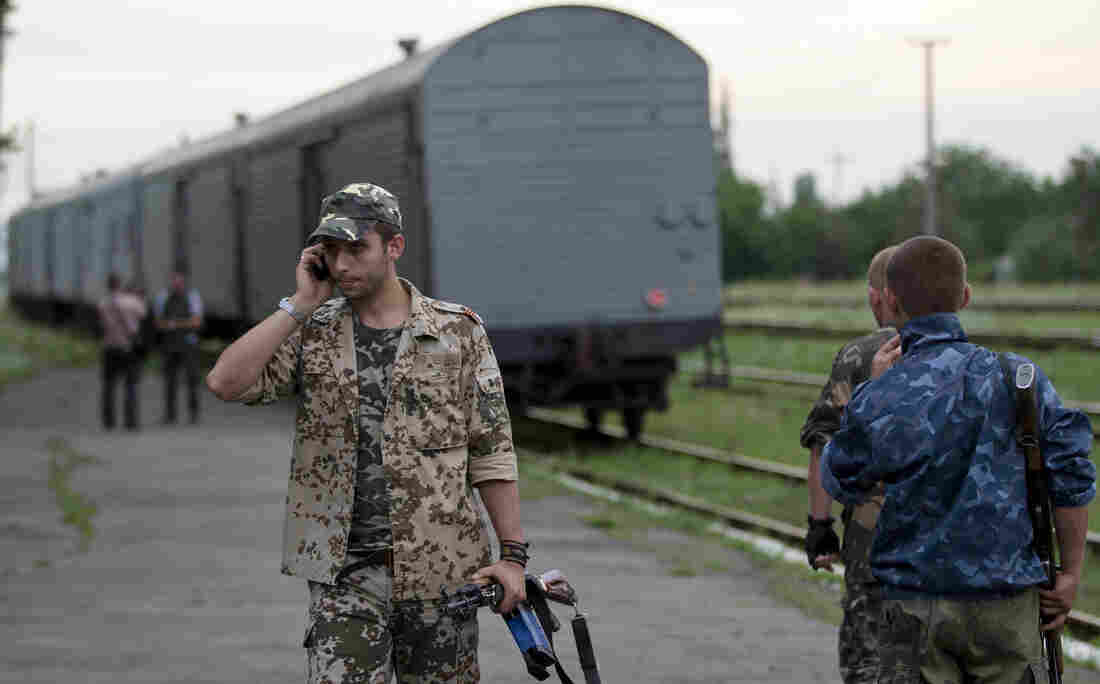 A pro-Russian rebel talks on a phone as a refrigerated train loaded with the bodies of victims from Flight MH17 leaves the station in Torez, eastern Ukraine, about 9 miles from the crash site of the Malaysia Airlines jetliner. Vadim Ghirda/AP hide caption 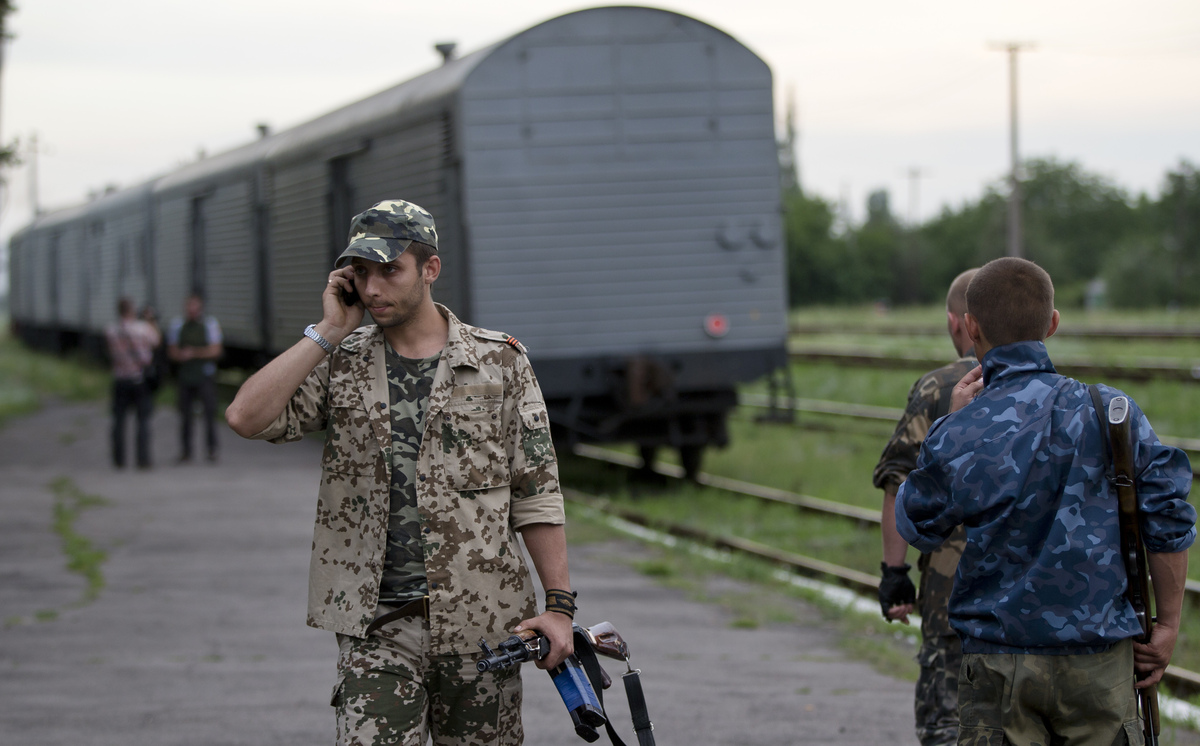 A pro-Russian rebel talks on a phone as a refrigerated train loaded with the bodies of victims from Flight MH17 leaves the station in Torez, eastern Ukraine, about 9 miles from the crash site of the Malaysia Airlines jetliner.

Pro-Russian separatists have given what they say are Malaysia Airlines Flight MH17's data recorders to Malaysian officials in Donetsk, the city in eastern Ukraine that has been the militants' stronghold.

Along with the release of victims' bodies hours earlier, the transfer of the black boxes fulfills part of a deal Malaysian Prime Minister Najib Razak said he had reached with the rebels Monday.

"Here they are, the black boxes," separatist leader Aleksander Borodai announced to reporters in Donetsk, according to Reuters, which adds that Borodai spoke "as an armed rebel placed the boxes on a desk."

The fate of Flight MH17's data recorders has been an open question since the airliner was shot down Thursday, killing all 298 people aboard.

Journalist Christopher Miller, of Kyiv Post and Mashable, tweeted photos of the transfer, at which a Malaysian official signed documents acknowledging receipt of the recorders — which are commonly orange, we'll note, not black.

The U.N. Security Council is calling for a complete international investigation of Flight MH17, adopting a resolution today that requires unrestricted access for investigators.

The measure was approved unanimously, gaining Russia's support only after a key edit.

"Russia agreed to the resolution after changes to the text which said the 'downing' of the plane, rather than the 'shooting down' of the aircraft," NPR's Jackie Northam reports.

The U.N. resolution includes a call for cooperation, both in the investigation and with efforts to punish those responsible for bringing down the airliner as it flew over eastern Ukraine. 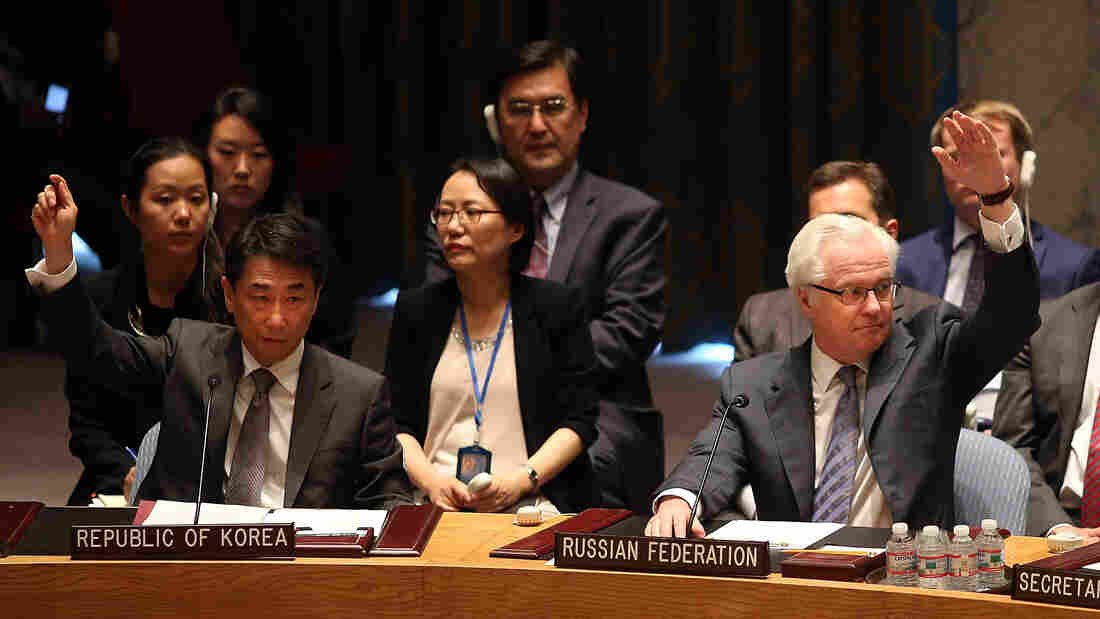 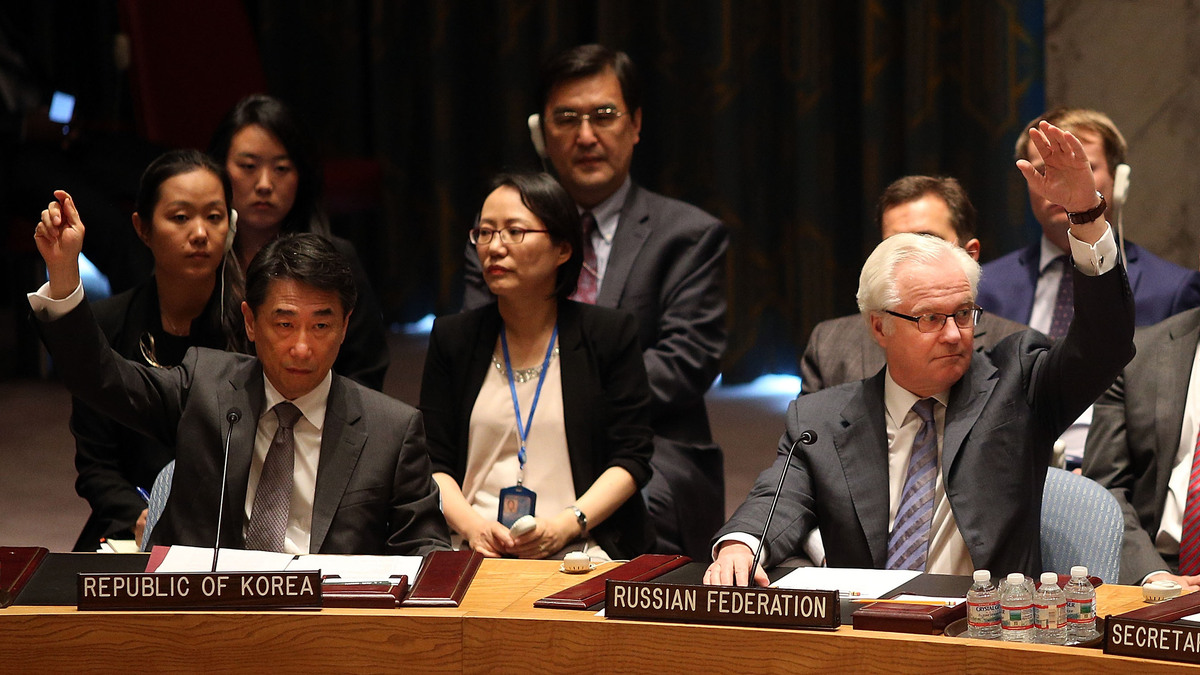 As Jackie notes, "Armed pro-Russian separatists have been in charge of the crash site since the plane exploded over Ukrainian farmland on Thursday, hampering inspectors trying to enter the area."

The nearly 300 people who were aboard the Boeing 777 perished after it was brought down by what U.S. officials say was an anti-aircraft weapons system brought in from Russia.

The Security Council's resolution calling for a complete investigation was drafted by Australia, which lost 37 citizens who had been on the plane.

"We owe it to the victims and their families to determine what happened and who was responsible," Australian Foreign Minister Julie Bishop said.

U.S. Ambassador to the U.N. Samantha Power said the events that followed the crash have only worsened the initial tragedy.

"We are not only outraged at the attack itself," she said. "We are horrified and enraged by what has happened since — by the clear intention of some to obstruct an investigation into how the passengers and crew died."

This afternoon's U.N. vote came shortly after Malaysian Prime Minister Najib Razak announced a deal with pro-Russian separatists in Ukraine to send the remains of those who were aboard the airliner to an area under the central Ukrainian government's control. That process reportedly has begun.

Reports that many of the bodies had been stockpiled in a train station under the militants' guard had provoked widespread outrage and condemnation, particularly from Dutch authorities. The bodies eventually will be sent to the Netherlands, where Thursday's flight originated and where more than half of its passengers were from.

As the Two-Way reported earlier today, Russian President Vladimir Putin said that the tragedy of the plane's lethal downing should "bring people together" rather than "dividing us."