Accessibility links
'This Is Wrong': U.N. Secretary General Condemns Attack On Gaza School : The Two-Way Ban Ki-moon called on Israel and Hamas to abide by international humanitarian law, saying there were other ways of resolving the issue than killing. More than a dozen people were killed in the attack. 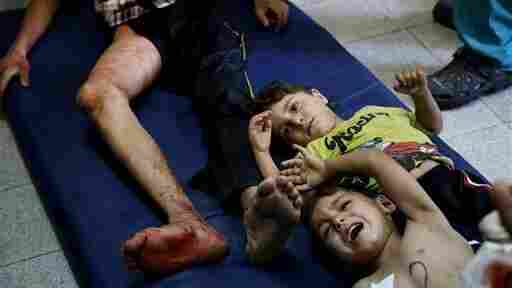 Injured Palestinian children lie on the floor of an emergency room after the U.N. school where they took refuge in the northern Gaza Strip was shelled. Lefteris Pitarakis/AP hide caption

A United Nations-run school sheltering civilians in Gaza came under attack Thursday, the U.N. says. More than a dozen people have been killed, according to Palestinian officials.

Reuters quotes Chris Gunness, a spokesman for the U.N. Relief and Works Agency, the main U.N. agency in Gaza, as confirming that the shelter in Beit Hanoun was hit.

The Associated Press reports that "Gaza health official Ashraf al-Kidra says the dead and injured in the school compound were among hundreds of people seeking shelter from heavy fighting in the area."

"Laila Al-Shinbari, a woman who was at school when it was shelled, told Reuters families had gathered in the courtyard expecting to be evacuated shortly in a Red Cross convoy.

" 'All of us sat in one place when suddenly four shells landed on our heads ... Bodies were on the ground, (there was) blood and screams. My son is dead and all my relatives are wounded including my other kids,' she wept."

Israel says it's looking into the incident. In a statement, the Israeli Defense Forces said militants opened fire at Israeli solders from the school area. The statement continues:

"In order to eliminate the threat posed to their lives, [the soldiers] responded with fire toward the origins of the shooting."

U.N. Secretary-General Ban Ki-moon condemned the attack, calling on Israel and Hamas to abide by international humanitarian law and respect "the sanctity of civilian life.

"This is wrong," Ban said. "Why are you continuing to kill people?

"There are many other ways to resolve this issue without killing each other," Ban said. "I'm angry about what they are doing."

State Department spokeswoman Jen Psaki said the U.S. was "deeply saddened and concerned about the tragic incident" and "the rising civilian death toll in Gaza."

"This also underscores the need to end the violence and to achieve a sustainable ceasefire and enduring resolution to the crisis in Gaza as soon as possible," Psaki said.

In 16 days of an Israeli offensive in Gaza, at least 788 Palestinians and 32 Israelis have been killed. Israel launched the ground operation in response to cross-border rocket attacks by Hamas.

In an earlier version of this post, the headline and text stated that a U.N.-run school in Gaza had been hit by Israeli artillery. Hamas has blamed Israel for the strike, while Israel has suggested that a Hamas rocket might have hit the school.