Accessibility links
First Ebola Patient Has Arrived In U.S. From Liberia : The Two-Way The first of two American aid workers infected with the deadly Ebola virus in Liberia arrived in Atlanta today to begin treatment. 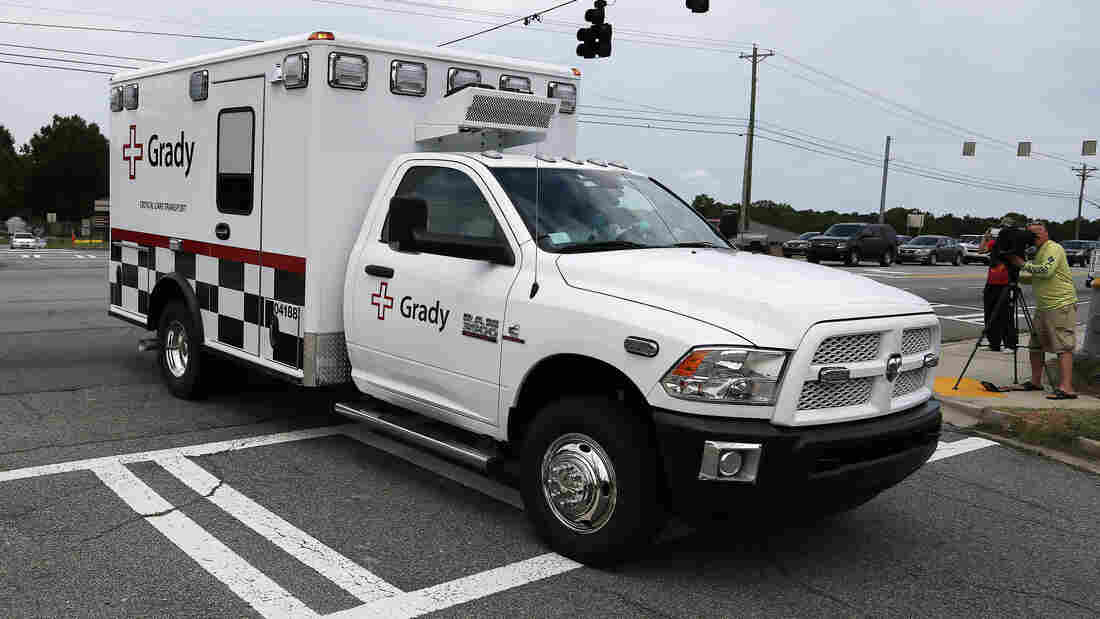 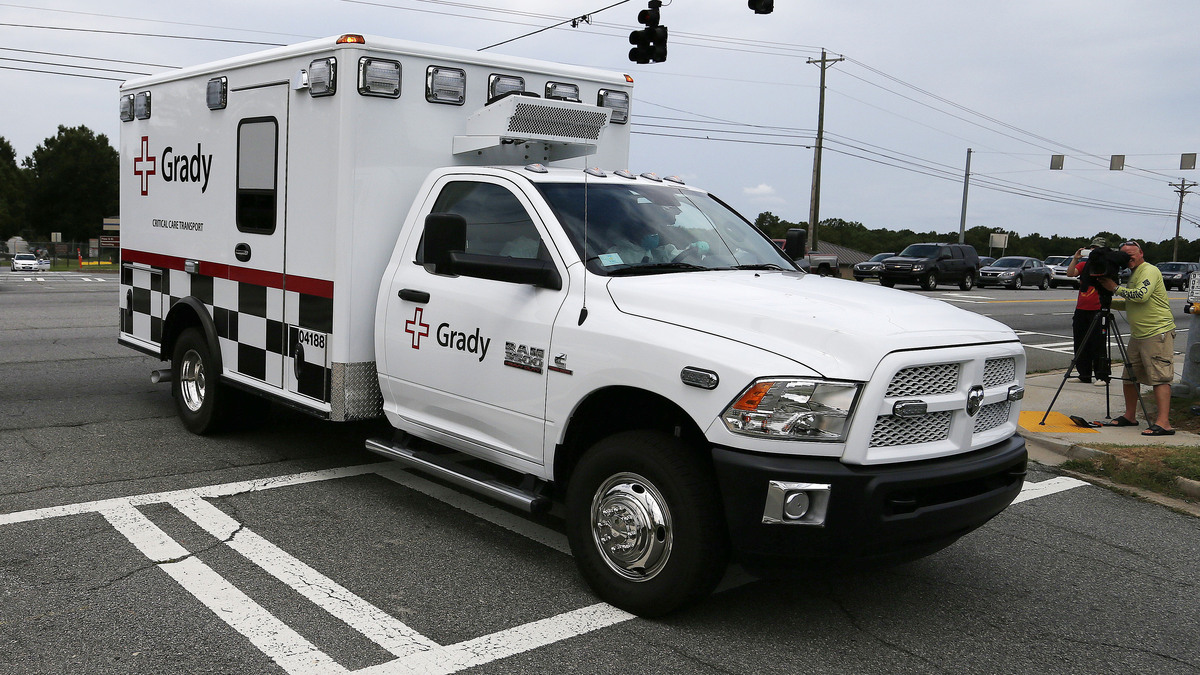 An ambulance departs Dobbins Air Reserve Base in Marietta, Ga., Saturday. Dr. Kent Brantly, an American infected with the Ebola virus, was transferred to Emory University Hospital in Atlanta today.

The first of two American aid workers infected with the deadly Ebola virus in Liberia reportedly arrived in Atlanta today to begin treatment. Dr. Kent Brantly has been living in quarantine conditions since realizing he had been infected with the disease last month.

The North Carolina-based mission organization Nancy Writebol serves with says that Writebol, who was infected along with Brantly, remains "in serious, but stable condition" and will head to the U.S. "in a few days" to be treated at Emory University Hospital.

The group, SIM, says Writebol will travel in "the same medical evacuation plane that brought that brought Brantly back to the U.S. for treatment." It adds that her husband, who is also in Africa, will soon travel to Atlanta as well, on a separate flight.

Live TV footage from WSB-TV's traffic helicopter showed the ambulance was following as it arrived at Emory University Hospital, about an hour and a half after the plane landed. 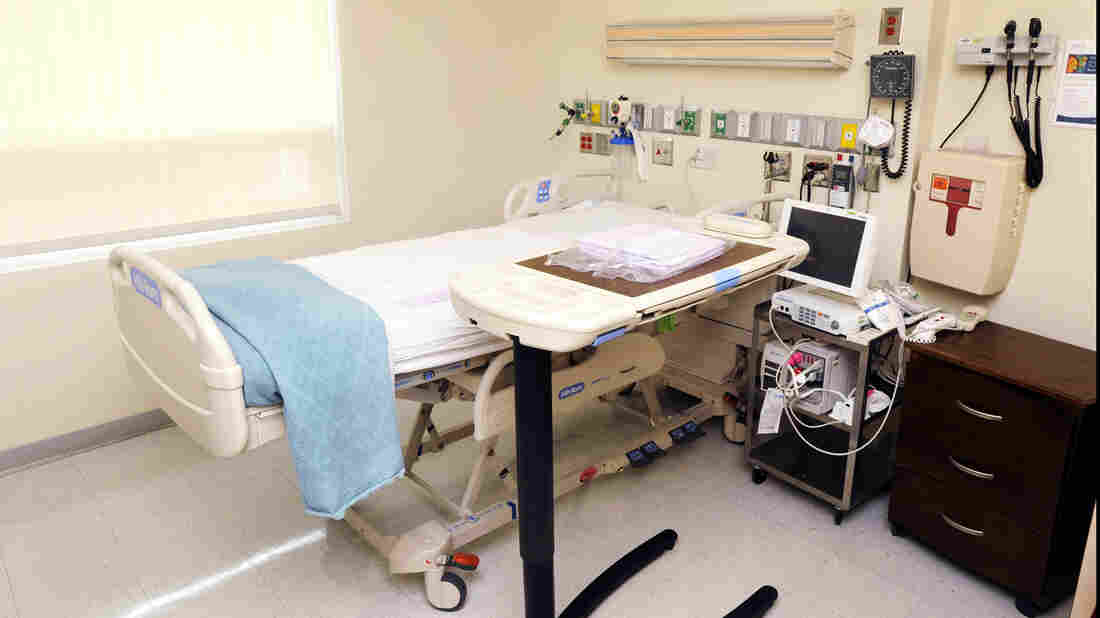 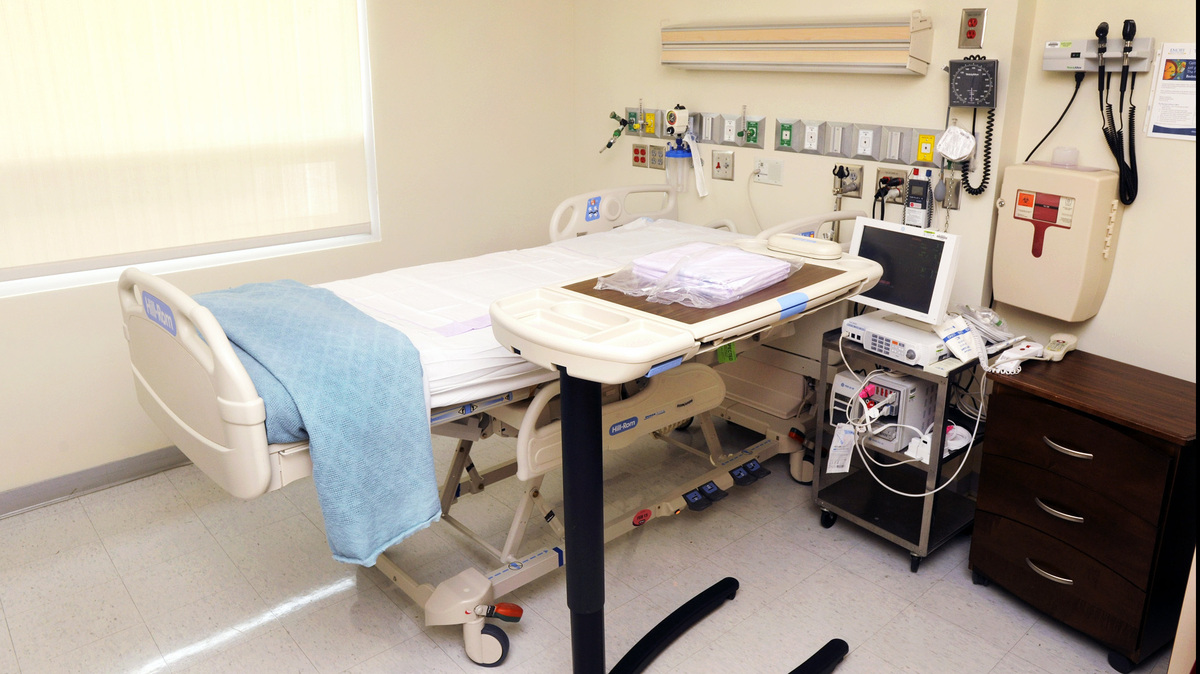 American patients infected with Ebola will be treated in an isolation room like this one at Emory University Hospital.

WSB also spoke to Brantly's brother Kevin, who lives in the Atlanta area. Last night, he said he'd talked to his brother on Friday, and that he seemed to be doing OK. Brantly says he's hoping to see his brother soon — and he's also thinking about the others who have been stricken with Ebola in Africa.

"I feel bad for all those people there that are dying, and they're scared, and they can't even get what we would consider poor care," he said. "It takes a lot of worry and care about other people to put your own life at risk for people you don't know. That's what it takes to make this world a better place, too."

This will mark the first time someone with Ebola has been treated in the U.S., as NPR's Michaeleen Doucleff reports.

Brantly, 33, and another aid worker, Nancy Writebol, 59, are said to be in serious but stable condition since they contracted the virus while fighting an outbreak that has killed more than 700 people in West Africa.

The two had been working for the Christian charity organization Samaritan's Purse when they became infected. When the news broke Thursday that Brantly and Writebol would be brought to the U.S., officials said they have a much better chance of surviving if they're treated in the U.S. rather than in Liberia.

News of the plan to evacuate people suffering from viral hemorrhagic fever from Africa to the U.S. has caused alarm in some circles. As Michaeleen reports, officials from the Centers for Disease Control and Prevention emphasize that the virus can't be spread by casual contact or through the air.

Both Emory University and the CDC are based in Atlanta; the school says it "has a specially built isolation unit set up in collaboration with the CDC to treat patients who are exposed to certain serious infectious diseases.

No drug can cure someone of Ebola. So far, the two American patients' treatments have included "a blood transfusion from a 14-year-old boy who recovered from the disease" and an "experimental serum," NPR's Richard Harris reports for our Shots health blog.

From member station WABE in Atlanta, Jim Burress reports about the treatment plans after today's arrival:

"The patient is expected to arrive from Liberia at Dobbins Air Reserve Base in Marietta, Ga. From there, a specially outfitted ambulance will take the patient approximately 18 miles to Atlanta's Emory University Hospital where there is a specially built isolation unit.

"Dr. Alexander Isakov is overseeing the transport. At a Friday press conference, he downplayed any threat to public safety.

"'Through drills and exercises over the years, we've developed our competency and feel confident we can do this job well,' he said.

"Once at the hospital, the patient will be treated by a team of doctors and nurses trained in infectious diseases. Emory says it expects the second patient to arrive within the next few days."