Accessibility links
Iraqi Leader Orders Air Support For Kurds Battling Extremists : The Two-Way Meanwhile, Kurdish forces are urging the U.S. to provide weapons in the fight against militants with the Islamic State. 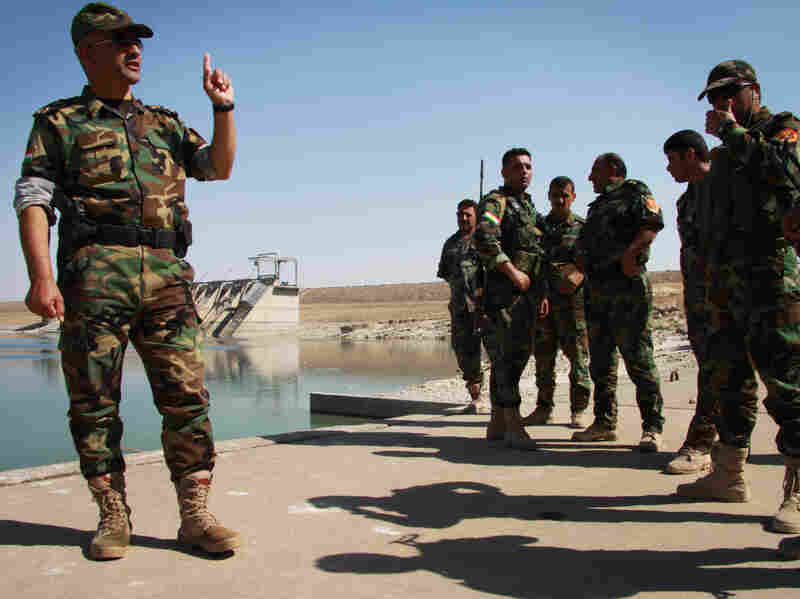 Brig. Gen. Mohammad Ali Mughdeed talks to the men he commands to protect the Mosul dam, a critical piece of infrastructure that supplies water and electricity. The dam recently fell to the Islamic State in Iraq, but Kurdish forces say they've retaken it, a claim that could not be verified. Alice Fordham/NPR hide caption 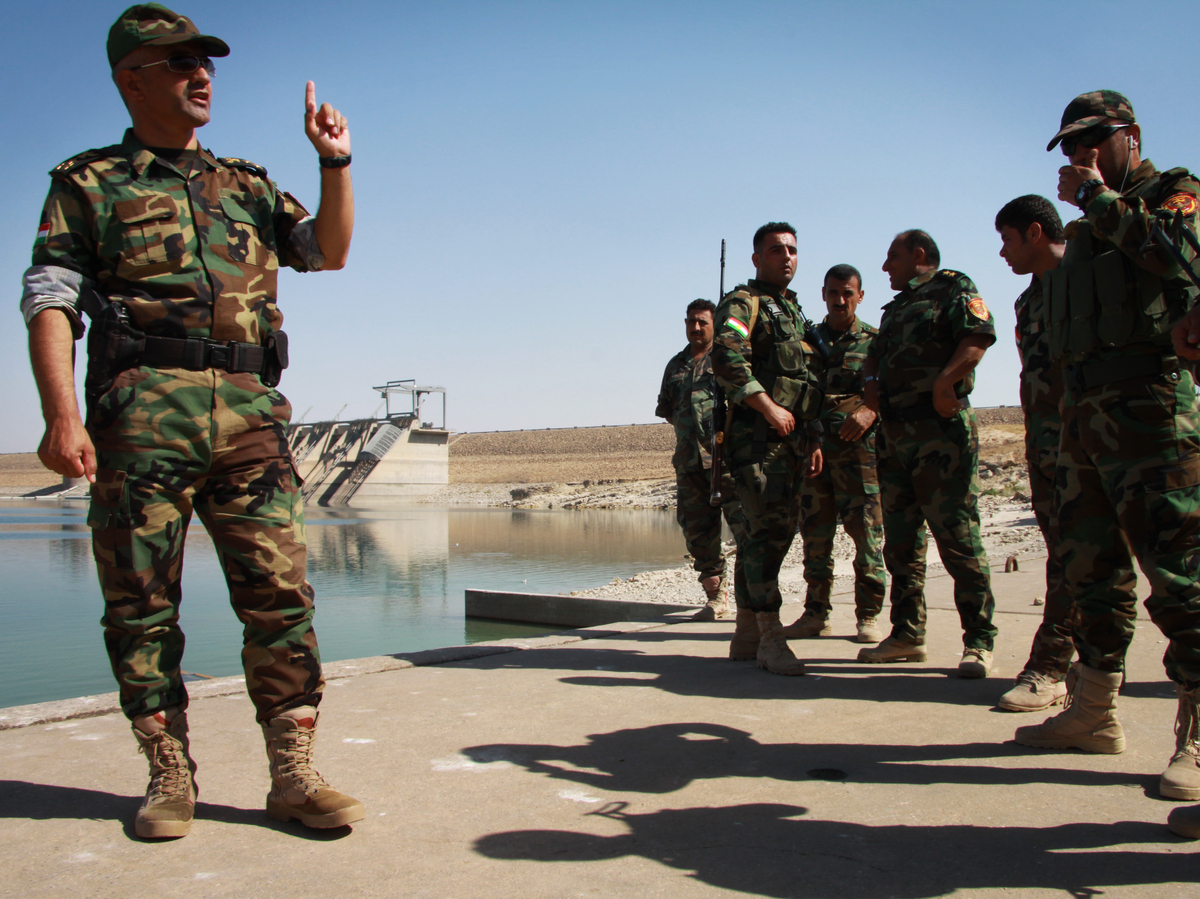 Brig. Gen. Mohammad Ali Mughdeed talks to the men he commands to protect the Mosul dam, a critical piece of infrastructure that supplies water and electricity. The dam recently fell to the Islamic State in Iraq, but Kurdish forces say they've retaken it, a claim that could not be verified.

Iraqi Prime Minister Nouri al-Maliki has ordered airstrikes in support of Kurdish soldiers who are fighting extremist militants with the Islamic State in the country's north.

Reuters reports via Iraqi state television that Maliki's military spokesman, Qassim Atta, ordered the air force to provide backup to the peshmerga against "the terrorist gangs of the Islamic State."

Meanwhile, NPR's Alison Meuse reports from Beirut, Lebanon, that Kurdish forces are urging the U.S. to provide them with weapons:

"Iraqi Kurdish soldiers known as peshmerga are pushing back against gains made by militants from the radical Islamic State, also known as ISIS. Now the Kurds have pledges of air support from the central government.

"Col. Hajjar, a peshmerga official, says there is already coordination with Kurdish militiamen from neighboring Syria; small units of Syrian Kurdish fighters are crossing the border to help battle the Islamic State.

"The peshmerga are also hoping for U.S. support. But that request must pass through Baghdad. Col. Hajjar is hopeful, saying: 'ISIS is a common enemy.' "

The Kurdish fighters are regarded as some of the most dependable in Iraq, but have suffered recent setbacks. Reuters adds that:

"On Sunday the Islamic State inflicted a humiliating defeat on the Kurds with a rapid advance through three towns to reach the Mosul dam, acquiring a fifth oil field to fund its operations along the way.

"State television and witnesses said the Islamic State had seized Iraq's biggest dam. Kurdish peshmerga officials said they had pushed militants from the dam area and were in control of it. This could not be immediately confirmed."

NPR's Alice Fordham recently interviewed the commander of the soldiers guarding the dam, Brig. Gen. Mohammad Ali Mughdeed, about why the structure is so important. Alice reports that Mughdeed believes that "if the militants capture the dam, they could threaten their enemies with flooding — for example, if the Iraqi army made gains in Mosul. And it's a hydroelectric dam — they could cut off the power. The commander believes the extremists know how to do it."

Flooding from the dam, which is located on the Tigris, could impact cities downriver such as Tikrit and Beiji and possibly Baghdad, according to Alice's report.

Cooperation between Baghdad's Shiite government and the leaders of the autonomous Kurdish region in the north is somewhat surprising because of recent sparring, including a legal tussle over who will control the revenue from a tanker full of oil from Kurdistan. Reuters reports that the enmity between the two groups is extensive:

"Maliki has been at odds with the Kurds regarding budgets, oil and land, and tensions deepened after the Islamic State seized control of large swathes of land in the north and west of OPEC member Iraq.

"In July, the Kurdish political bloc ended all participation in Iraq's national government in protest over Maliki's accusation that Kurds were allowing terrorists to stay in Irbil, the capital of their semi-autonomous region known as Kurdistan."