Accessibility links
Do Not Fear This Giant Robot Swarm : The Two-Way Researchers created a swarm of 1,024 tiny robots to do their bidding. So far, the only job they're given is to arrange themselves into a shape. But future versions could perform all sorts of tasks. 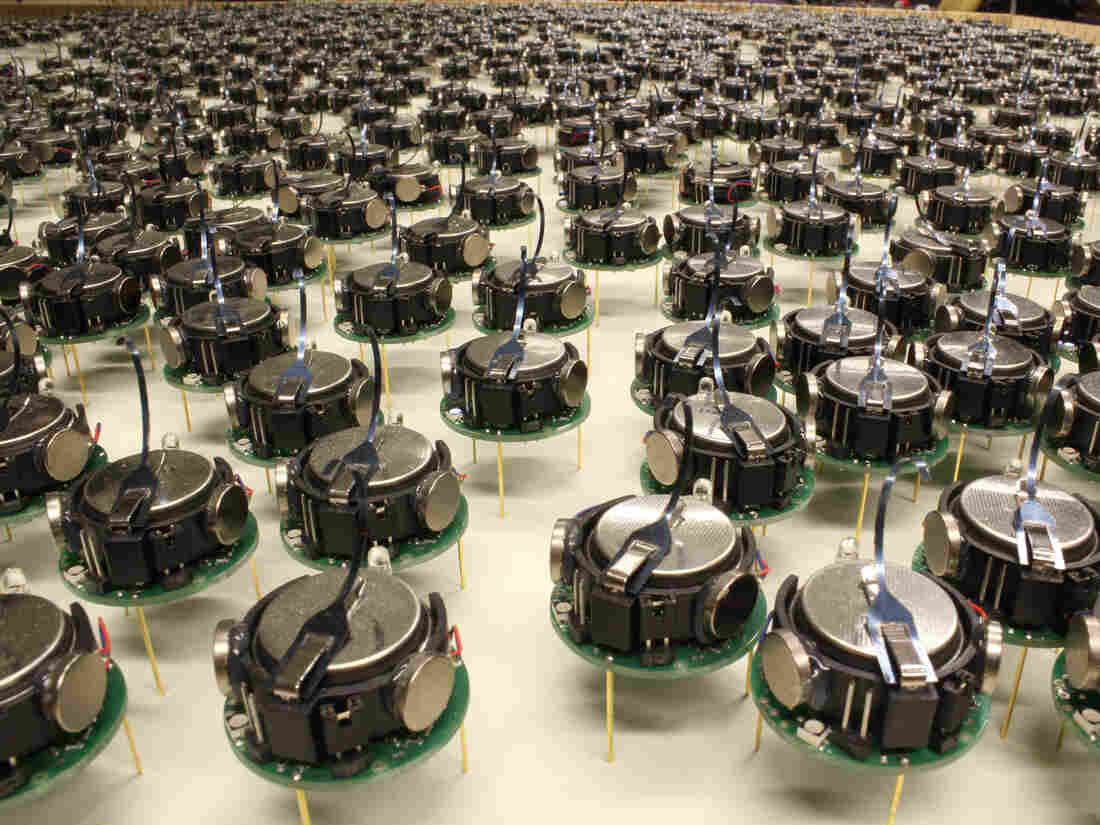 These 1024 "kilobots" can shuffle into any shape their creator desires. Each robot is a little bigger than a quarter, standing on three little metal legs that vibrate to make it move. Courtesy of Michael Rubenstein hide caption 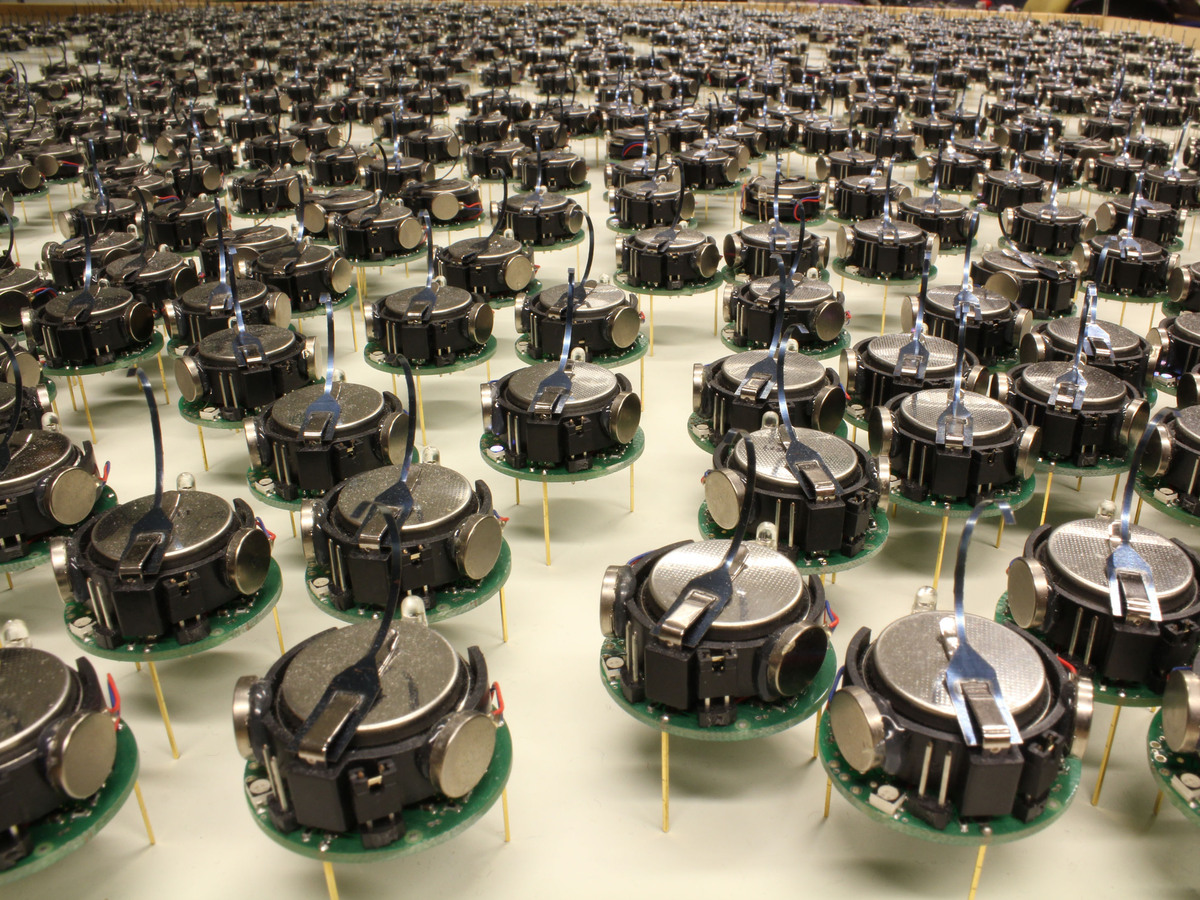 These 1024 "kilobots" can shuffle into any shape their creator desires. Each robot is a little bigger than a quarter, standing on three little metal legs that vibrate to make it move.

Harvard roboticist Mike Rubenstein thought he was being clever when he came up with the name for the 1,024 little robots he built. He's into computers, so he thought of kilobytes and named them kilobots.

"Unfortunately, it sounds like they're 'killerbots,' which ... we don't intend for them to be killing anyone," Rubenstein says.

Despite the branding problem, his robot swarm is actually pretty harmless.

"I think the only way they could hurt you is if you tried to eat them," Rubenstein says. They're tiny, and they don't have spinning claws or death rays. 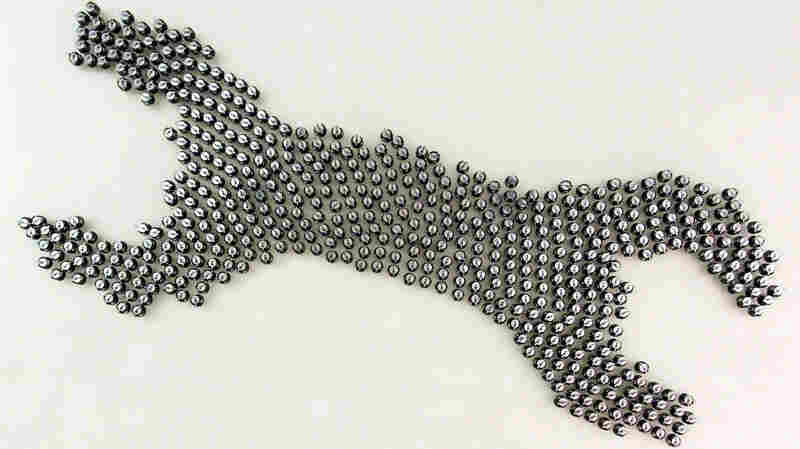 Rubenstein says eventually swarms of robots could link up to form handy tools at a moment's notice. Courtesy of Michael Rubenstein hide caption 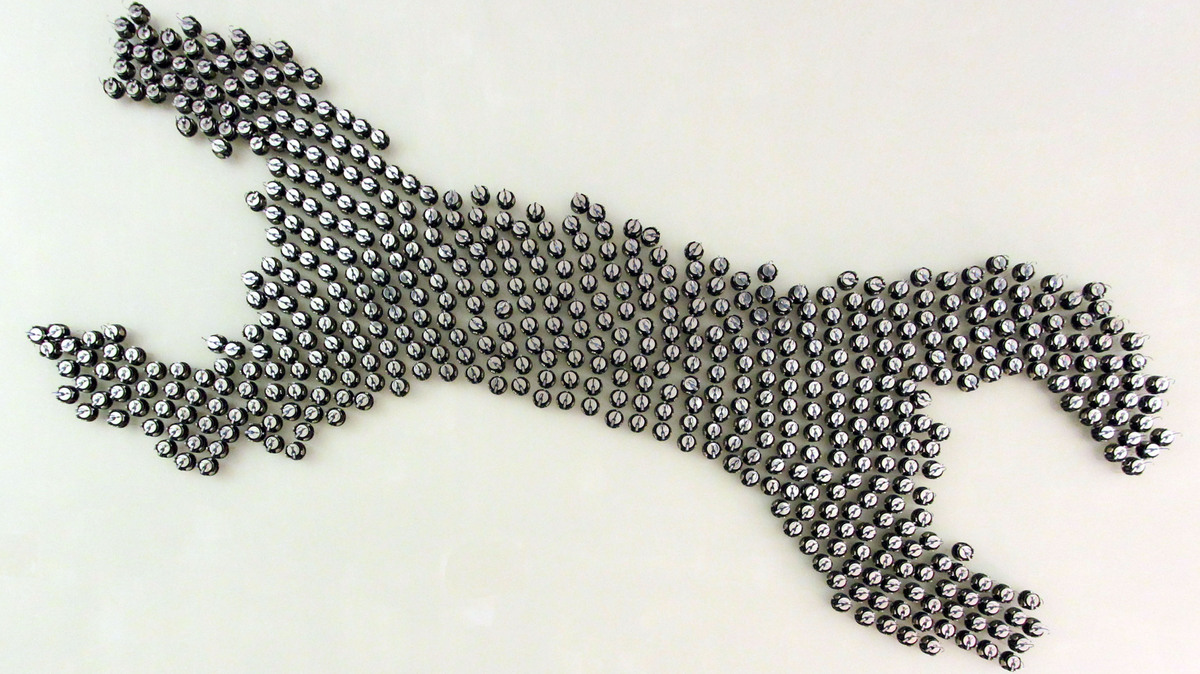 Rubenstein says eventually swarms of robots could link up to form handy tools at a moment's notice.

"They're a little bit bigger than a quarter, and they stand off the table with three little metal legs," he says. That's how they move. The little legs vibrate, and off the robot goes, something like a vibrating cellphone wobbling across a table.

Each kilobot also has a battery, and a sensor so it knows where it is relative to the others. They were built by hand, which required months of monotonous soldering by Rubenstein's lab (he refers to the tedious sessions as "robot assembly parties").

Individually they are a little boring — what makes these kilobots so cool is what they can do together. Rubenstein developed a program where he can draw a shape on a computer, the robots receive the pattern wirelessly, and then they scoot around to make it. It takes hours for them to shuffle into the right shape, and it doesn't always go smoothly.

"Sometimes a very slow robot will have a bunch of other robots get stuck behind it in a traffic jam," he says.

But eventually these little robots do organize themselves.

"We ran two experiments with a thousand robots, and they both formed the shape correctly," he says. "The shape is slightly warped, but it's very recognizable as the desired shape."

It's by far the largest robot collective ever built, according to Roderich Gross, a researcher at the University of Sheffield in the U.K. "There have been many swarms so far, but they were typically composed of 20 to 50 robots," he says.

It's the technology that allows all the robots to work together that Gross finds impressive. Just switching on 100 robots by hand would take forever, but the kilobots can be turned on all at once. They can orient relative to each other, and compensate for broken comrades.

Robots like these could eventually perform all sorts of jobs. Gross thinks they might be able to monitor a city's environment, in order to tell when pollution is getting out of control. Rubenstein envisions a time when robots can join up to form tools. Self-forming robo-tools could be useful for long space journeys, where you don't want to lug a bunch of different equipment with you.

All of those applications are a way down the road. Rubenstein says his next swarm will still be pretty basic, and harmless. And he's trying to find a less kill-y sounding name for them: "The pleasant group of robots ... the not-dangerous-robots whatsoever," he muses.