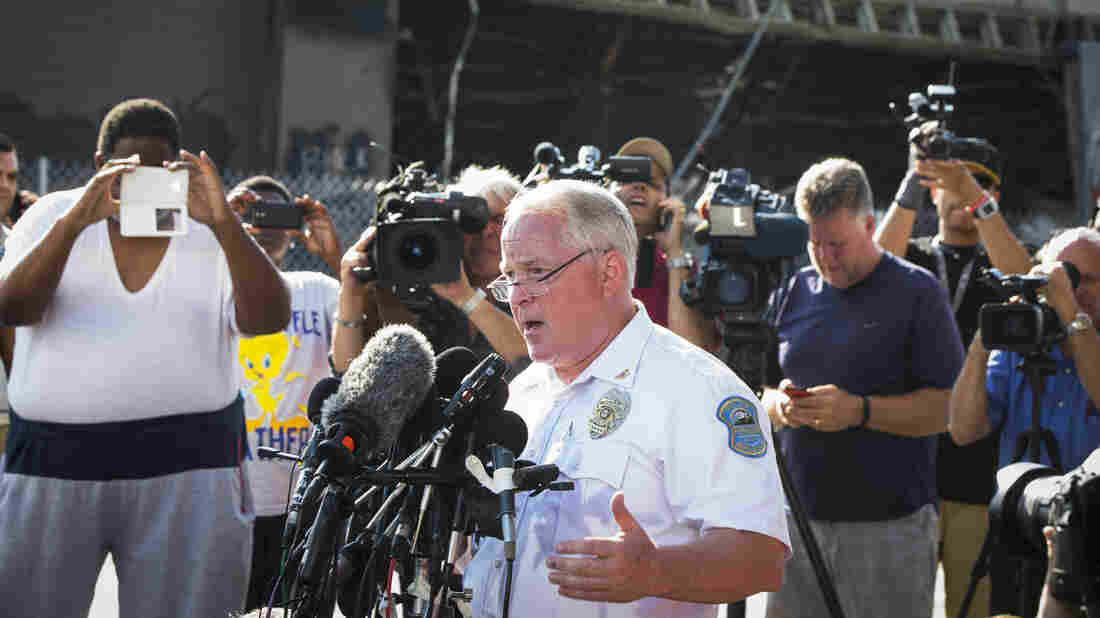 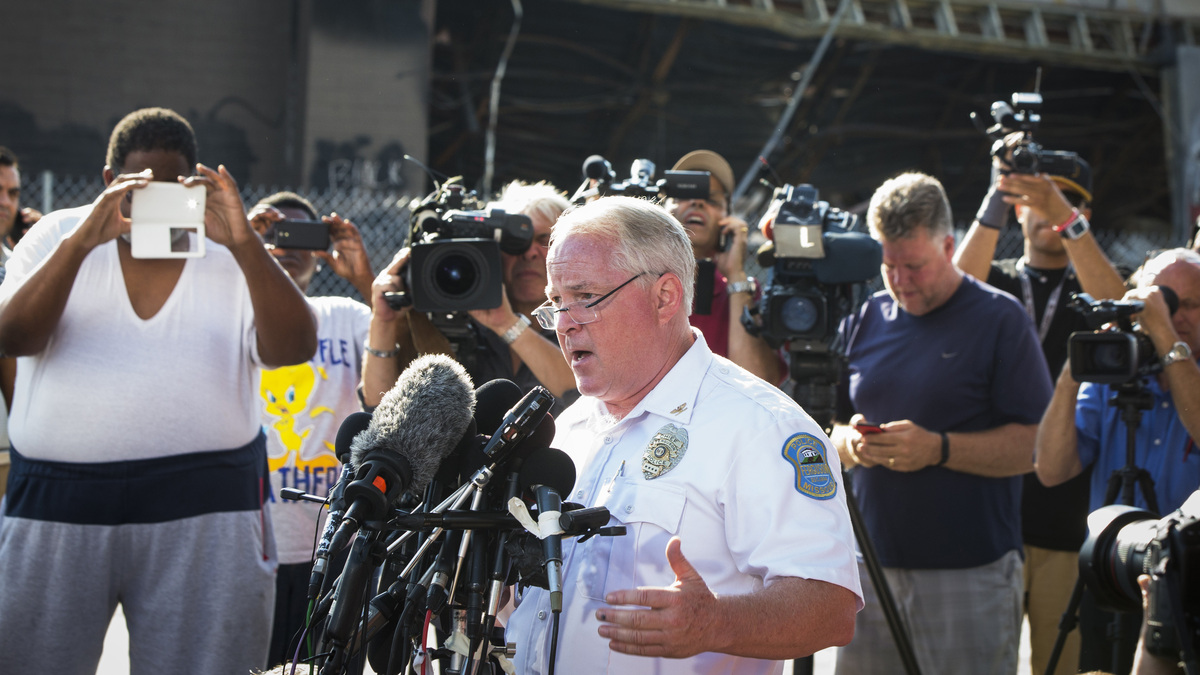 Ferguson Police Chief Thomas Jackson says the officer who shot and killed unarmed black teenager Michael Brown last Saturday is Darren Wilson, a six-year veteran of the force who has no disciplinary actions on his record with the department.

The release of Wilson's name comes after Jackson said he wouldn't identify the man out of concerns for his safety, citing death threats made to Ferguson police and on social media. Jackson said that Wilson was treated for injuries he sustained Saturday.

Before he released the name, Jackson discussed a robbery that had occurred shortly before Brown's death on Aug. 9. He said that police were releasing footage and records related to that robbery, responding to "sunshine" requests for public information.

In a press release, FBI Special Agent in Charge William P. Woods said that his agents and Justice Department attorneys had several interviews with people who witnessed the shooting, and that they will be canvassing the neighborhood to find anyone else who might know about what happened.

Update at 4:50 p.m. ET: Family Attorney: Man In Video Appears To Be Brown

Relatives of Michael Brown and attorneys representing the family held a news conference this afternoon, reiterating their charge that the release of the video purporting to show a robbery "was strategic and aimed at destroying the character" of the victim.

Anthony Gray, an attorney for the family, said the video was part of a "sideshow" to distract from the circumstances of the shooting.

He said the family's message was "do not take the bait."

Eric Davis, a cousin of Brown's, questioned whether the man in the robbery video was indeed his relative, but Daryl Parks, another attorney for the family, acknowledged that it appears to be him.

"I wouldn't say that he robbed the store, but it does look like him," Parks said.

Despite the distractions, he said, "We continue to believe that the most important thing that happened that day in the middle of the street was that officers killed Mike."

Update at 3:20 p.m. ET: Police Chief: Officer In Shooting Was Unaware Of Robbery

Jackson, speaking at an afternoon news conference, said he wanted to respond to questions raised about the timing of the release of the tape.

"This robbery does not relate to the initial contact between the officer and Michael Brown," he said, adding that the "strong-arm" (unarmed) robbery occurred about 10 minutes before the stop that led to the fatal shooting.

"It had nothing to do with the stop," Jackson said.

Asked why Wilson stopped Brown, the police chief said because Brown and his friend "were walking down the middle of the street blocking traffic."

Jackson said he had gotten numerous Freedom of Information Act requests from the media to release the video. "I had to release it," he said.

"I had been sitting on it and too many people put in FOIA requests for it and I had to release it," he said.

"We needed to release that at the same time we released the name of the officer," he said.

Update at 1 p.m. ET: 'Michael Brown's Family Is Beyond Outraged'

Saying that the Ferguson Police Department is trying to "assassinate the character of their son," the family of Michael Brown issued a statement Friday afternoon, saying it is "beyond outraged."

"The prolonged release of the officer's name and then the subsequent alleged information regarding a robbery is the reason why the family and the local community have such distrust for the local law enforcement agencies," the family said.

The family and its attorneys also complain that while images were released that are alleged to be of Michael Brown, police officials have still not released a photograph of Wilson.

The release of the robbery allegations seems to have surprised Missouri Highway Patrol Capt. Ronald Johnson, who gave an update on the security situation in Ferguson. At a midday news conference, Johnson said he hadn't seen the material before it was given to the media this morning, and he said he would talk to Chief Jackson about how the information was handled.

The ACLU of Missouri has filed two lawsuits: one "sunshine" request seeking the release of the police incident report about Michael Brown's death, and another that seeks to protect the rights of citizens and journalists to videotape police activity.

While Chief Jackson didn't directly link Brown to the robbery at a convenience store, the police materials released Friday mention Brown by name, along with another man named Dorian Johnson.

The report of a strong-arm robbery is in a packet of materials police released today. It includes an incident report that transcribes surveillance video in which Brown and Johnson are described entering the store and picking up a box of Swisher Sweet cigars.

The names of the people who were working at the store are whited-out of the report. But the report says one of them attempted to stop the men from leaving the store without paying — and that Brown grabbed the worker and pushed him away before leaving with the cigars.

Images from the materials, which police say were taken by the store's surveillance cameras, show a large man grabbing a smaller man by the shirt and forcing the man away.

The police report states that the two incidents — the robbery and Brown's shooting — are related. It was written by an officer who said:

"I responded to that scene and observed Brown. After viewing Brown and reviewing this video, I was able to confirm that Brown is the primary suspect in this incident. A second person, also at that scene, identified himself as being with Brown. That person was later identified as Dorian Johnson. After observing Johnson and reviewing the video, I confirmed he is the second suspect in this incident."

We'll note that Dorian Johnson was the witness who spoke to MSNBC earlier this week, giving a vivid description of Saturday's shooting and saying he was only an arm's length away when the first shots were fired.

On the top-right corner of the robbery report, its case status is listed as "exceptionally cleared."

Jackson did not directly connect Saturday's robbery report with Brown's death. But he did lay out a timeline of events that puts the altercation with Brown occurring less than 10 minutes after a description of a suspect in the robbery had gone out.

That call about a Ferguson store came at 11:51 a.m., Jackson said; a description went out on the police dispatch at 11:52. And at 12:01, Wilson "encountered Michael Brown on Canfield Drive," the police chief said.

Jackson also said that two other officers, along with an ambulance that had been on a call nearby, responded to the scene where Brown was killed.

Jackson did not take any questions, saying he would speak to the media again this afternoon.

As soon as the police chief's news conference was over, yelling could be heard from people who had gathered nearby to listen. One woman was heard criticizing Jackson, saying he had implied that Brown might have been involved in the robbery — and questioning why the information about a robbery was only now coming out.

"That was no robbery; it was murder," one man said.

Jackson released Wilson's name during a news conference outside the QuikTrip convenience store that was set on fire Sunday, the first night of violent protests in Ferguson. In the background over his shoulder, "Mike Mike" — Brown's nickname — had been written on a gas pump.

The death of Brown, 18, remains under investigation, and the details are in dispute. Police say he was killed after a struggle over the officer's gun. Witnesses say Brown died after running away from the officer and raising his hands.

As we reported earlier this week, a witness who says he was walking with Brown just before the altercation says the officer had told them to get out of the street and onto a sidewalk. The situation quickly escalated, he said, and Brown was shot several times.

Soon after the shooting, Jackson asked the St. Louis County police to handle the inquiry. The FBI and the Justice Department are also investigating.

As we reported earlier today, the atmosphere in Ferguson changed considerably Thursday, as protesters welcomed a new police approach of toning down the military-style response that had ratcheted up tensions in the town.