What Washington Can, And Can't, Do In Ferguson

Attorney General Eric Holder will be going to Ferguson, Mo., on Wednesday to meet with federal agents and community leaders there, President Obama said in a news conference Monday.

The Justice Department is conducting its own investigation into the death of Michael Brown, an unarmed black teen who was shot by a police officer and whose death has sparked a week of protests.

That will be a challenge, but FBI agents have already been on the ground, canvassing the neighborhood for information.

In a statement Monday afternoon, Holder asked for patience during the investigation. He added:

"The selective release of sensitive information that we have seen in this case so far is troubling to me. No matter how others pursue their own separate inquiries, the Justice Department is resolved to preserve the integrity of its investigation. This is a critical step in restoring trust between law enforcement and the community, not just in Ferguson, but beyond."

Tear gas made another appearance in Ferguson on Monday night, according to St. Louis Post Dispatch reporters:

Protests escalated again late Monday night as police fired tear gas at protesters who defied police by refusing orders to disperse, instead gathering in groups near the QuikTrip and other Ferguson spots.

Police fired at least three tear gas volleys near the QuikTrip as emergency vehicles sped to the scene. Police also used tear gas to break up protesters near West Florissant and Northwoods Estates.

NPR's Gene Demby reported seeing flash bombs, and that some protesters were targeting an MSNBC anchor.

Getty Images and family members have confirmed that photographer Scott Olson has been released from jail after being arrested earlier in the evening. His son said via Twitter that Olson wasn't calling it a day yet.

I just spoke to my dad, Scott Olson. He's out of jail and said "looks like protests are kicking up. I'm going back to work." #Ferguson

NPR reporter Elise Hu says that all Ferguson schools will be closed through the end of the week, and that armored National Guard Humvees have begun moving toward the protests. Authorities are requiring protesters to keep moving and not maintain a demonstration in any single place, and have arrested two men for failing to disperse, The Associated Press reports.

St. Louis-based rapper Nelly is also on the scene, she reports.

Update at 9 p.m. ET. — Other Ferguson News To Read

--In addition to the remarks noted above, President Obama responded to a question about a program that has helped local law enforcement buy military-style equipment. The New York Times and Newsweek have both written overviews of the initiative.

"It's probably useful for us to review how the funding has gone, how local law enforcement has used grant dollars, to make sure that what they're purchasing is stuff that they actually need," Obama said Monday.

--There are reports of more arrests, including Getty photographer Scott Olson (some of whose photographs are in our slideshow above). Getty's vice president of news responded to Olson's arrest in a statement on its website, which said in part:

"We strongly object to his arrest and are committed to ensuring he is able to resume his important work of capturing some of the most iconic images of this news story."

--There's also been buzz about this new Pew research showing "stark racial divisions in reactions to Ferguson" police shooting and protests. A highlight: "Blacks are about twice as likely as whites to say that the shooting of Michael Brown 'raises important issues about race that need to be discussed.' "

Asked if he could be doing more himself — including going to the St. Louis suburb — Obama said he did not want to appear to be tipping the scale of justice one way or the other. 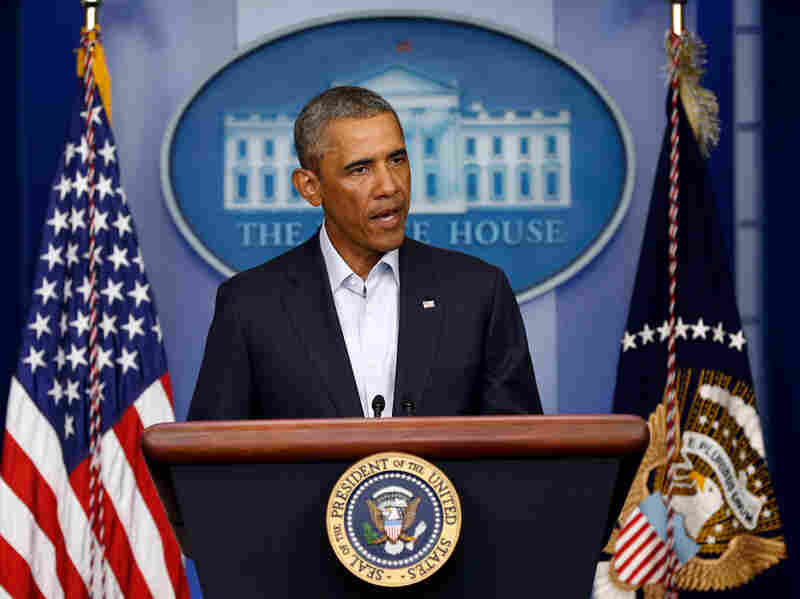 President Obama speaks during a press conference at the White House on Monday about the situation in Iraq and the ongoing violence in Ferguson, Mo. Win McNamee/Getty Images hide caption 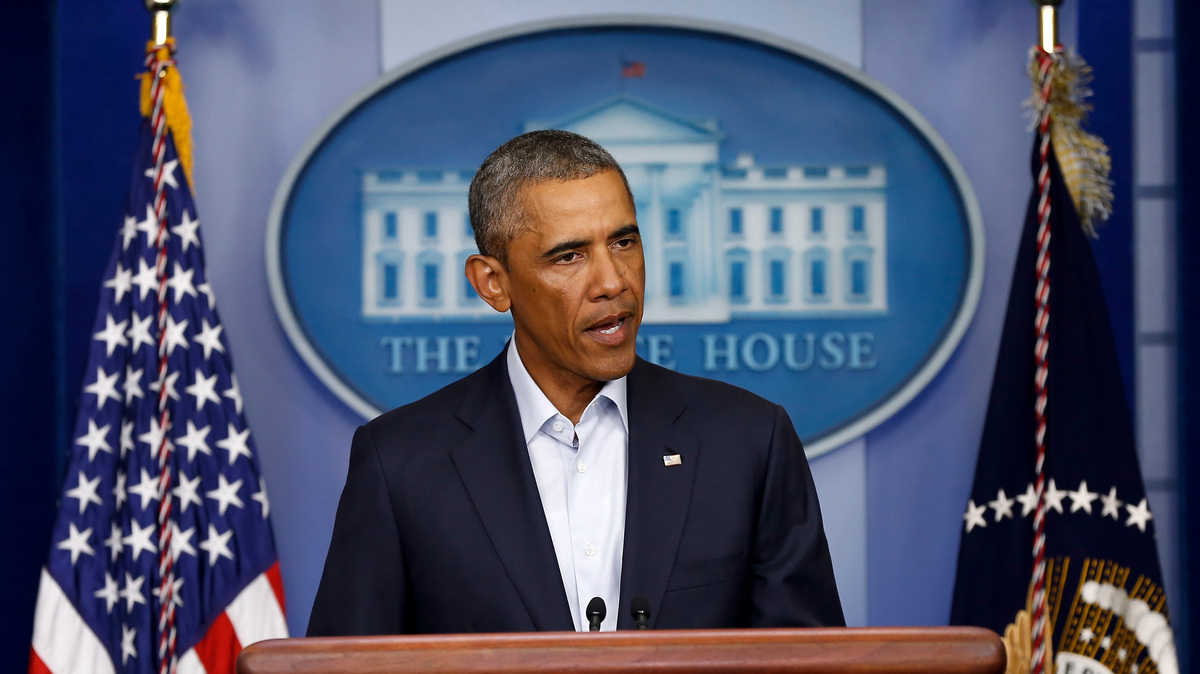 President Obama speaks during a press conference at the White House on Monday about the situation in Iraq and the ongoing violence in Ferguson, Mo.

"I have to be very careful about not prejudging these events before investigations are completed," he said.

Obama also discussed his efforts to work with communities "that feel left behind," including the My Brother's Keeper initiative.

"Part of the ongoing challenge of perfecting our union has involved dealing with communities that feel left behind, who as a consequence of tragic histories often find themselves isolated, often find themselves without hope, without economic prospects," the president said. "Part of my job that I can do, I think without any potential conflict, is to get at those root causes."

Obama noted that getting to those roots has been a challenge for centuries, but in the short term, he said he wanted to ensure that justice was carried out fairly in Ferguson.

"It's clear that the vast majority of people are peacefully protesting," he said. "What's also clear is that a small minority of people are not." But he said there is "no excuse for excessive force by police" or action that denies people's right to freedom of speech or assembly.

In regards to Gov. Jay Nixon's decision to call in the National Guard (which will be overseen by the state Highway Patrol), Obama said that he would be watching in the next several days "to assess whether in fact it's helping rather than hindering progress."

What Washington Can, And Can't, Do In Ferguson

Civil rights lawyers who used to work for the Justice Department tell Johnson that at some point Justice may announce a bigger civil investigation of local police behavior and the relatively low number of African-Americans in the force. "Those are ripe targets for investigation by DOJ moving forward," Johnson says on All Things Considered.

But with Brown's case, Johnson reports, the Justice Department has a "limited role" because murder is not generally prosecuted in the federal system.

"So the only jurisdictional hope that the attorney general has here is to find out whether the police officer who shot Michael Brown violated his civil rights," Johnson tells NPR's Audie Cornish. "In order to make that case, federal prosecutors would have to prove the officer, Darren Wilson, intended to use way more force than a reasonable person would in the same situation."

Meanwhile, protests continue in Ferguson. And Obama has called for calm once again.

"Let's seek to heal rather than wound each other," he said.