Accessibility links
Same-Sex Marriages On Hold In Virginia After Supreme Court Weighs In : The Two-Way The U.S. Supreme Court has blocked an appeals court ruling that would have allowed gay marriages to begin in Virginia tomorrow. 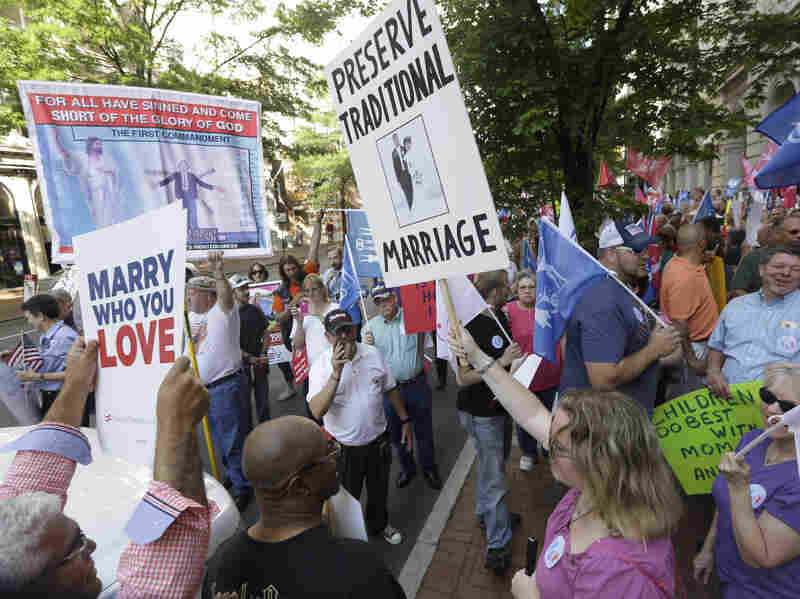 Supporters and opponents of gay marriage demonstrate outside the federal appeals court in Richmond, Va., in May. Steve Helber/AP hide caption 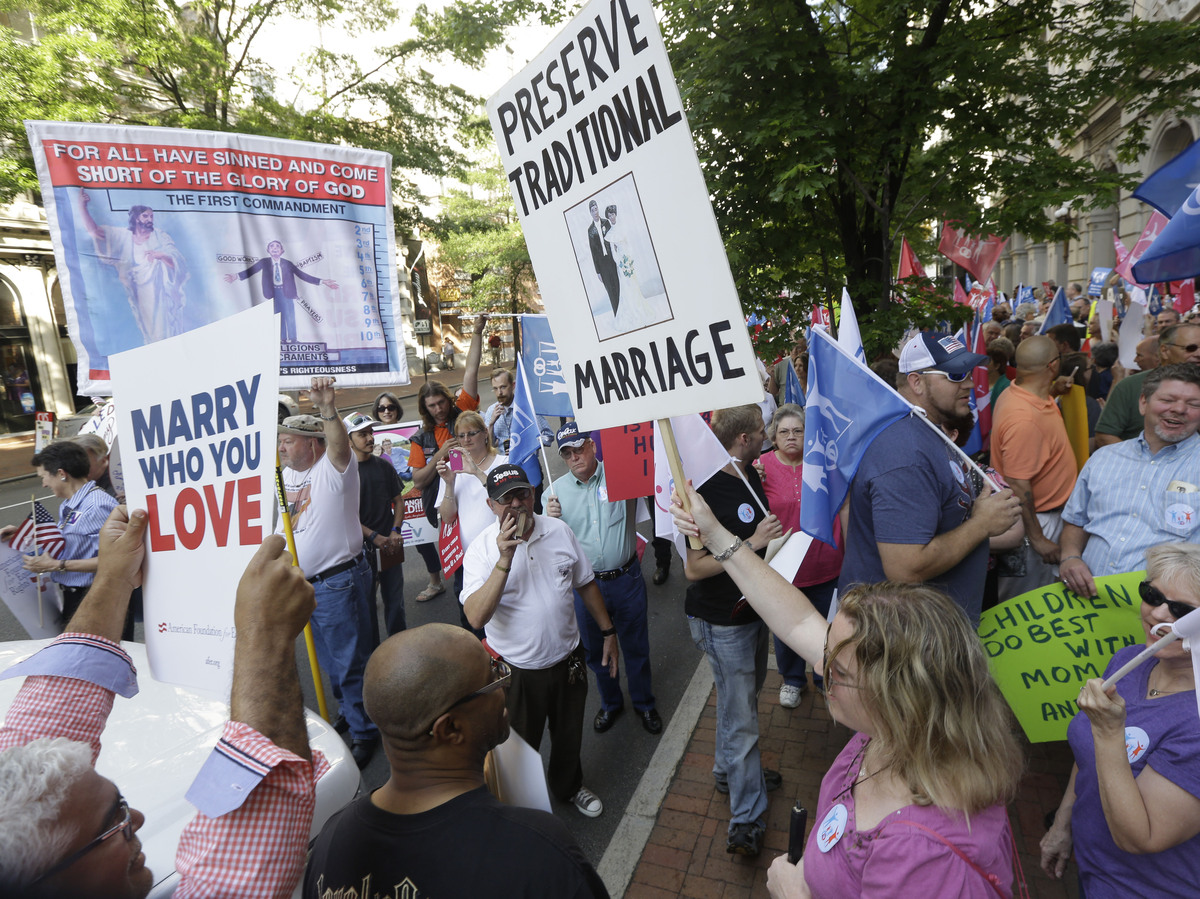 Supporters and opponents of gay marriage demonstrate outside the federal appeals court in Richmond, Va., in May.

The U.S. Supreme Court has stepped in to block a federal appeals court ruling that would have allowed gay marriages to begin in Virginia on Thursday.

The decision was widely expected and tells little about how the high court will ultimately rule on the issue. It merely preserves the status quo.

Indeed, while Virginia officials urged the Supreme Court to strike down the ban on gay marriage, they also urged the court to put a hold on the immediate issuing of marriage licenses.

In asking the court to grant the stay, Virginia officials noted that one of the factors the court traditionally considers is whether failure to temporarily block the lower court ruling would result in "a likelihood of irreparable harm." In a brief filed with the court, state officials acknowledged that the loss of the right to marry, "even for minimal periods of time, unquestionably constitute irreparable injury." On the other hand, the state said, if the Supreme Court ultimately were to uphold the ban on same-sex marriage, it would have "rendered doubtful" hundreds or thousands of same-sex marriages that would have taken place in the interim.

Indeed, that is precisely the situation facing Utah, where 1,700 same-sex marriages took place before the Supreme Court granted a stay to temporarily prevent further marriages there.

Virginia also contended that if the Supreme Court ultimately upholds the state's ban on gay marriage, the children of same-sex couples would be irreparably harmed. More than 2,500 same-sex couples in Virginia are raising more than 4,000 children, and officials said that had the court failed to issue a stay, there was the possibility that many of the children who are the biological children of one parent and would have been adopted by the other parent after marrying, would have to be "un-adopted" if the marriages are ultimately ruled illegal.

Similarly, employers and insurers who pay benefits to same-sex spouses of employees might seek restitution should the Supreme Court uphold the ban.

For all these reasons, the state urged the Supreme Court to take the step it did today in temporarily blocking implementation of the lower court decision, which struck down the ban on gay marriage and permitted same-sex marriages to take place.

The state also asked the justices to decide the gay marriage constitutional question "as quickly as possible."

The first opportunity for the court to take action would be when it meets Sept. 29 for its first conference of the new term. But even if the court decides to go ahead and take the Utah case, which likely will be the first one there, the timetable for filing briefs would put the argument at mid- to late January at the earliest.

Many court specialists believe the justices will go ahead and take either the Utah or Virginia case early in the term. Other experts think the justices may want to wait for a decision from the 6th Circuit Court of Appeals, based in Cincinnati, where the panel at argument this month sounded as though it would uphold the ban on gay marriage. That would provide a conflict in the lower courts for the Supreme Court to resolve.

To date there have been 37 pro-gay marriage rulings in state and federal courts since the Supreme Court last year struck down the federal Defense of Marriage Act. That law barred federal recognition of marriages performed in states where such unions are legal, and set the stage for a nearly unanimous set of rulings in the lower courts issued by both Republican and Democratic appointees.

Nineteen of the 50 states, plus the District of Columbia, currently allow same-sex marriage.