Accessibility links
Obama Blames Russia For Violence In Ukraine; Calls Moves 'Incursion' : The Two-Way The president's remarks came the same day Ukraine said Russian troops entered its territory. The conflict has resulted in the worst tensions between Russia and the West since the end of the Cold War. 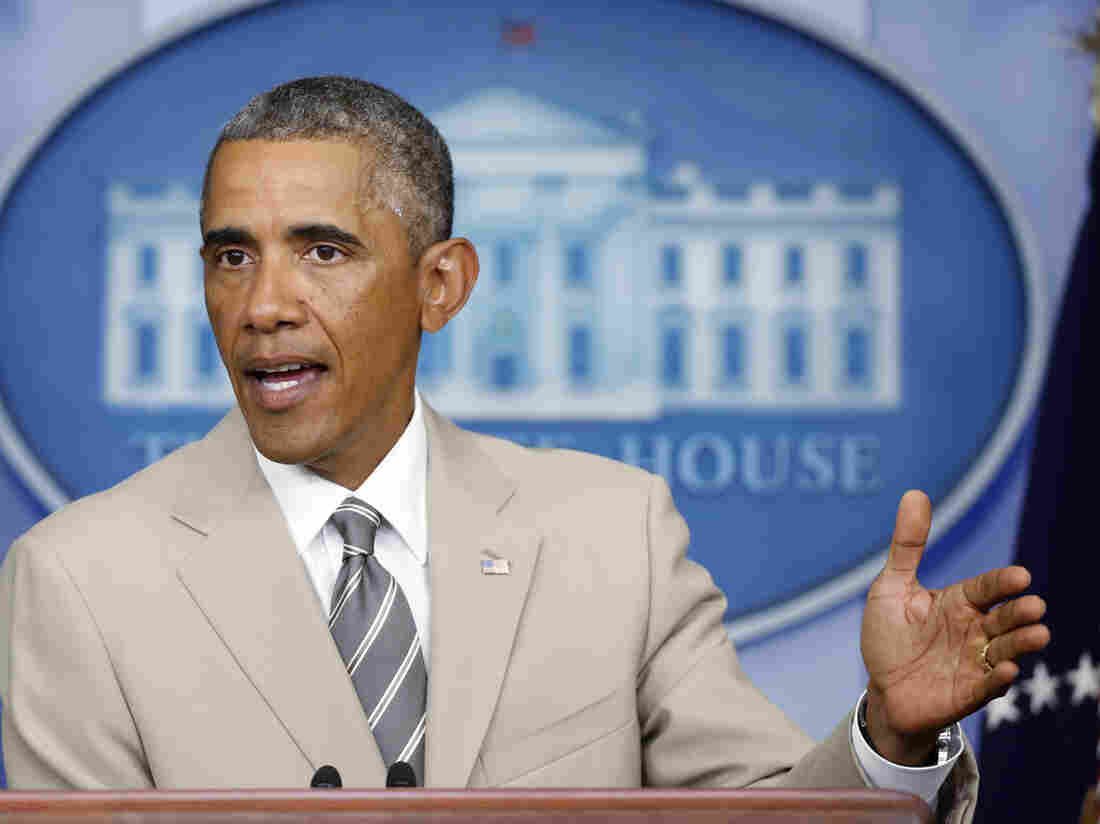 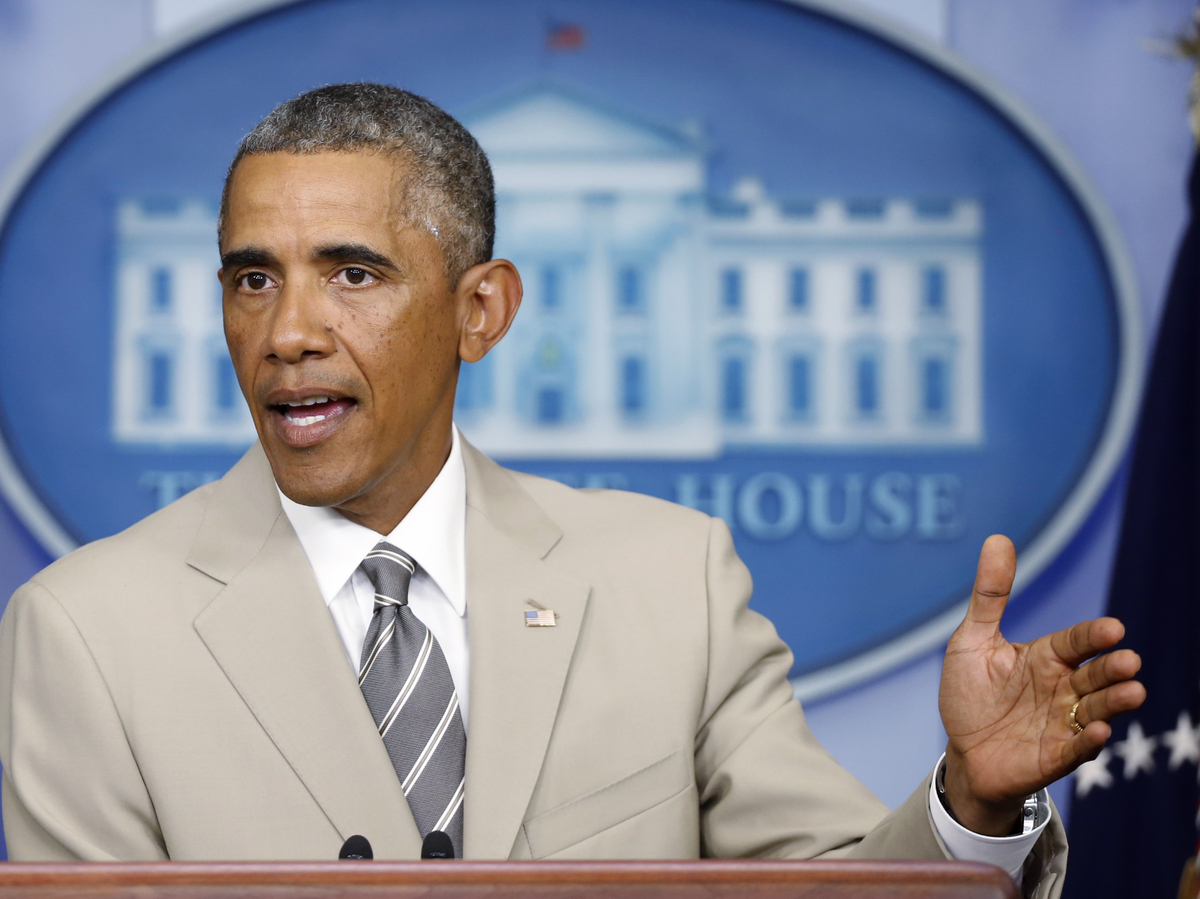 President Obama said at a White House news conference Thursday that Russia is to blame for the violence in eastern Ukraine.

President Obama blamed Russia for the violence in Ukraine and said its "incursion" into the former Soviet state will only carry additional costs.

"Russia has deliberately and repeatedly violated the sovereignty and territorial integrity of Ukraine, and the new images of Russian forces inside Ukraine make that plain for the world to see," Obama said at a White House news conference on Thursday.

The comments came on the day Ukrainian President Petro Poroshenko said Russian troops entered his country, and asked the U.N. Security Council to meet to provide an assessment of the "sharp aggravation of the situation in Ukraine." Another Ukrainian official told CNN that the movement of Russian troops amounted to a "full-scale invasion."

Obama said Poroshenko would visit the White House next month, a show of unity between the two allies.

The conflict has resulted in the worst tensions between Russia and the West since the end of the Cold War. The U.S. has already imposed sanctions on Russia's banking, energy and defense sectors.

"Capital is fleeing, investors are increasingly staying out, his economy is in decline," Obama said. "This ongoing Russian incursion into Ukraine will only bring more costs and consequences for Russia."

Indeed, the Western sanctions might be having some effect, with fears that Russia might be heading toward an economic recession.

Obama said Thursday that he spoke to German Chancellor Angela Merkel about the situation, adding that the two leaders agreed "Russia is responsible for violence in eastern Ukraine."

Earlier, Geoffrey Pyatt, the U.S. ambassador to Ukraine, tweeted that because Russian-supplied weapons had not secured a victory for pro-Russian rebels, there was now an "increasing number of Russian troops ... intervening directly in fighting on Ukrainian territory."

NPR's Soraya Sarhaddi Nelson reminds us that these reports of incursions are not new. They've happened many times over the course of this five-month-long conflict.

"But what's different this time is that they seem a little more brazen about it," Soraya told Morning Edition. "Even as Russia is denying officially from the Kremlin that they are doing this, and they say troops that have been captured crossed over mistakenly; they're not admitting to it. ... But there seems to be much more of an openness to this in the last few days than we've seen in the past." 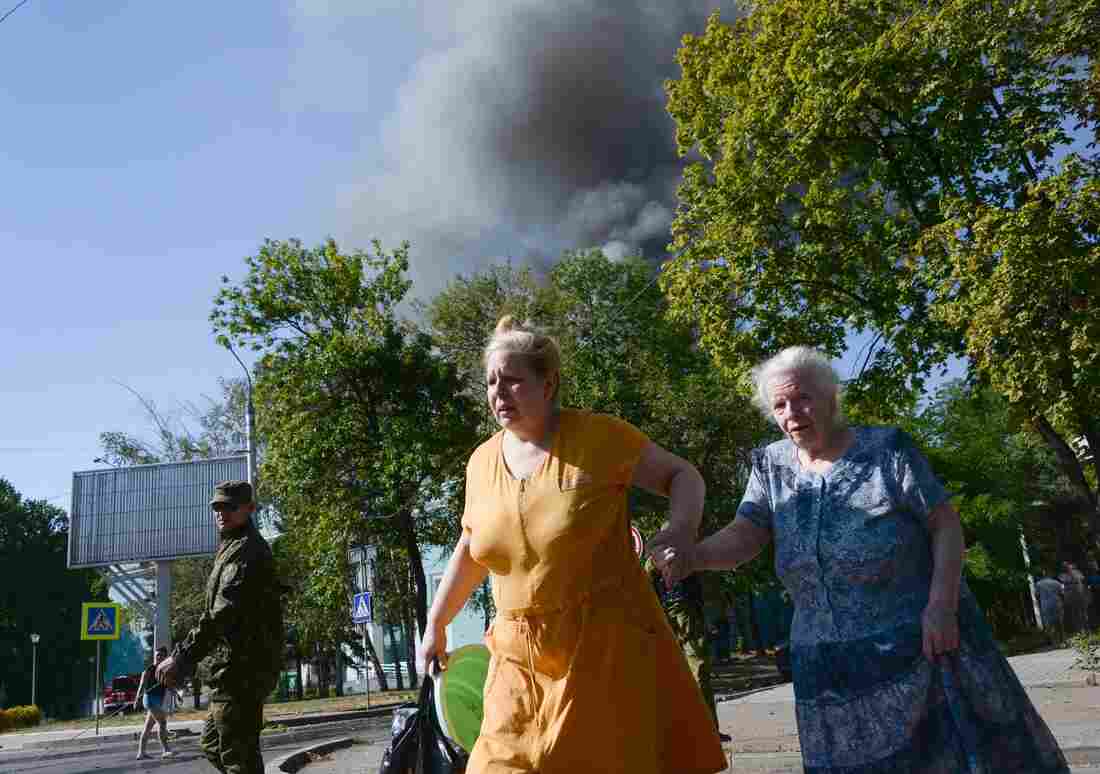 Women rush across the street after shelling in the town of Donetsk, Ukraine, on Wednesday. Mstislav Chernov/AP hide caption 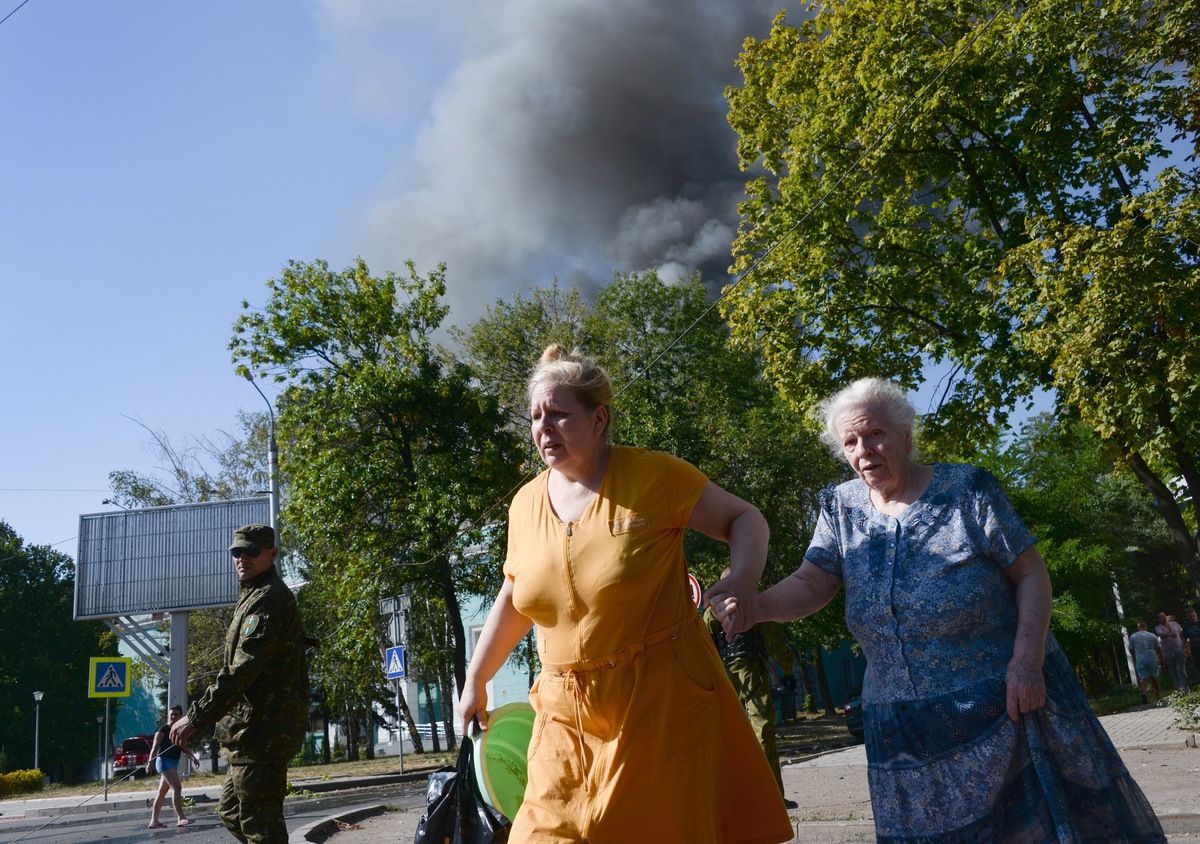 Women rush across the street after shelling in the town of Donetsk, Ukraine, on Wednesday.

The Washington Post reports that in a meeting on Tuesday, Poroshenko and Russian President Vladimir Putin vowed cooperation in securing Ukraine's eastern border.

Still, "even as reports of Russian tanks and soldiers on the ground in Ukraine continued to come in Wednesday, Russian Foreign Minister Sergei Lavrov said Russia does not want Ukraine to break apart."

"The mask is coming off," she said. "In these acts — these recent acts — we see Russia's actions for what they are: a deliberate effort to support, and now fight alongside, illegal separatists in another sovereign country."

She said at least one separatist commander in eastern Ukraine had boasted of 3,000 to 4,000 Russian troops fighting alongside the rebels. "He was quick to clarify that these soldiers were on vacation," Power said.

"But a Russian soldier who chooses to fight in Ukraine on his summer break is still a Russian soldier," she said. "And the armored Russian military vehicle he drives there is not his personal car."

Correspondent Teri Schultz tells our Newscast unit that Russia has escalated its movements in Ukraine.

"NATO is releasing new satellite imagery to back up the claims that Moscow is sending large shipments of artillery, air-defense systems and other advanced weapons into rebel-held areas of eastern Ukraine. Brig. Gen. Nico Tak says well over 1,000 highly trained Russian troops are there now helping the separatists use the systems.

" 'The presence of these weapons along with substantial numbers of Russian combat troops inside Ukraine make the situation increasingly grave,' Tak said."