Accessibility links
Canada Says It Has Found Ship From Doomed 1845 Arctic Expedition : The Two-Way The fate of Capt. Sir John Franklin and crew has been a mystery for more than 160 years, but now Canadian archaeologists believe they've found one of the expedition's two main vessels.

The Erebus and the Terror among icebergs, as illustrated in The Polar World by G. Hartwig in 1874. Sir John Franklin, British naval officer and arctic explorer, commanded the 1845 expedition of the ships to search for the Northwest Passage. All members of the expedition perished. G. Hartwig/Universal History Archive/Getty Images hide caption

The Erebus and the Terror among icebergs, as illustrated in The Polar World by G. Hartwig in 1874. Sir John Franklin, British naval officer and arctic explorer, commanded the 1845 expedition of the ships to search for the Northwest Passage. All members of the expedition perished.

One of two ships lost more than 160 years ago in an ill-fated expedition to the Northwest Passage led by British Capt. Sir John Franklin has been found by Canadian archaeologists, Prime Minister Stephen Harper announced today.

It could be the HMS Erebus or the HMS Terror — researchers aren't sure yet, but they believe one of the two appears in this sonar image: 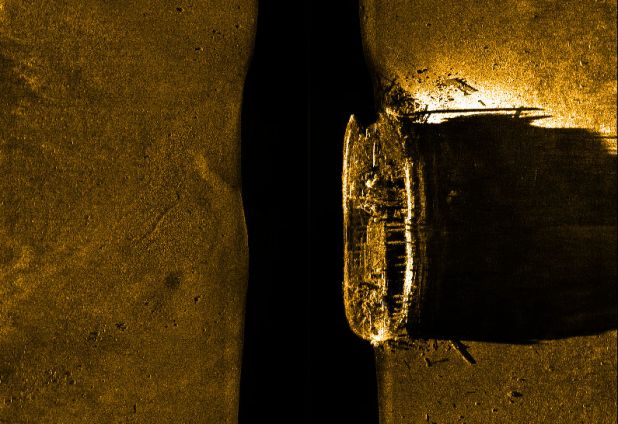 "This is truly a historic moment for Canada," the prime minister said of the discovery.

Harper's remarks at Parks Canada's laboratories in Ottawa follow an announcement on Monday that two artifacts from the 19th-century Arctic expedition were found on an island in Nunavut, Canada's northernmost territory.

Both the Erebus and Terror were icebound during the expedition that left England in 1845 in an attempt to chart an unnavigated portion of the Northwest Passage.

"The wreckage was found on Sept. 7 using a remotely-operated underwater vehicle recently acquired by Parks Canada.

"On Monday, the government of Nunavut announced that a team of archeologists from Nunavut found an iron fitting from a Royal Navy ship, 'identified as part of a boat-launching davit, and bearing two broad arrows,' on an island in the southern search area, the territory's government said.

"A wooden object, 'possibly a plug for a deck hawse, the iron pipe through which the ship's chain cable would descend into the chain locker below,' was also found.

"The iron fitting was lying on the shore, adjacent to a rock, a large rock, and the wooden artifact was a bit farther away, a bit farther from the shoreline," archeologist Doug Stenton told CBC News."

The exact fate of Franklin's 1845 expedition, his third and final voyage to the Canadian Arctic, has been one of history's enduring mysteries.

"Sir John Franklin and 128 crewmen were lost in the original expedition. Skulls believed to be of the members of the expedition were found and buried on King William Island in 1945.

"But for 167 years it has remained a mystery as to why Franklin and his men were never heard from soon after the Royal Navy had mounted one of the best equipped Arctic explorations in its history to find a possible trade route between the Atlantic and Pacific oceans."

By way of background, the Royal Museums in Greenwich, England, says that the loss of Franklin, already considered a hero for his previous Arctic exploits, spawned some 30 subsequent expeditions to locate him, championed and apparently funded in many cases by his second wife, Lady Jane Franklin. Many people themselves died looking for the lost men. (The CBC has a timeline of the searches here.)

The museum says: "Following clues gathered from Inuits by John Rae in 1854, an 1859 expedition led by Francis McClintock found relics and human remains on King William Island where it transpired the Erebus and Terror had become stuck in the ice, apparently on the brink of success in navigating the North-West Passage."