Accessibility links
Crime Falls As U.S. Locks Up Fewer People, Attorney General Holder Says : The Two-Way For the first time in more than 40 years, both the overall crime rate and the overall incarceration rate have fallen by around 10 percent in a roughly five-year span, the attorney general says. 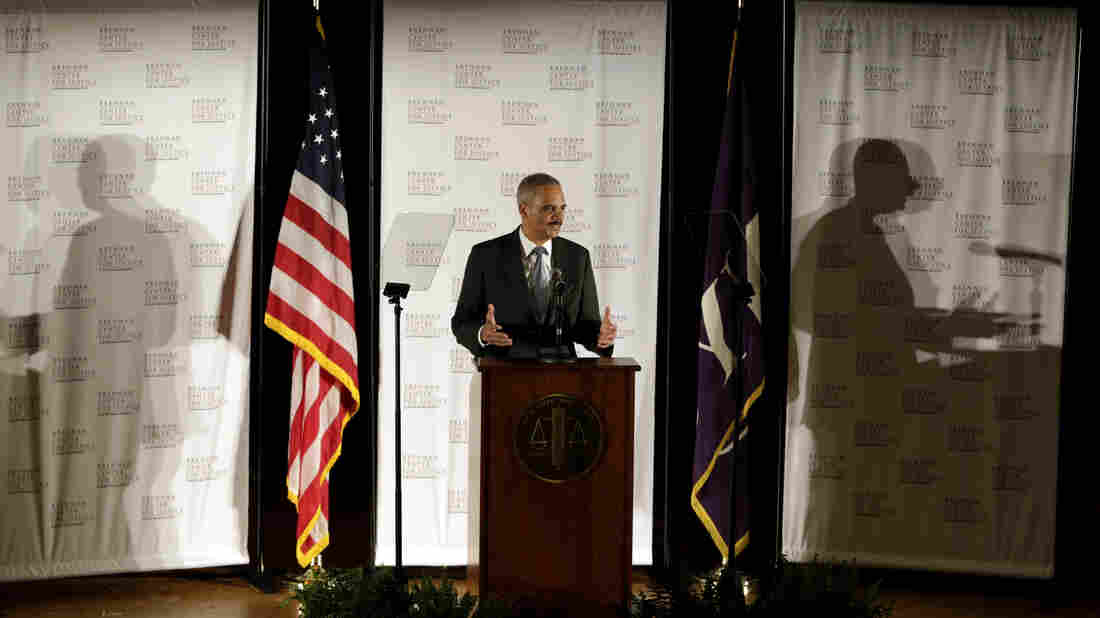 In the past year, the U.S. prison population fell by roughly 4,800, the first time in decades the number has gone down, according to the Justice Department. Attorney General Eric Holder discussed the findings in New York on Tuesday. Julio Cortez/AP hide caption 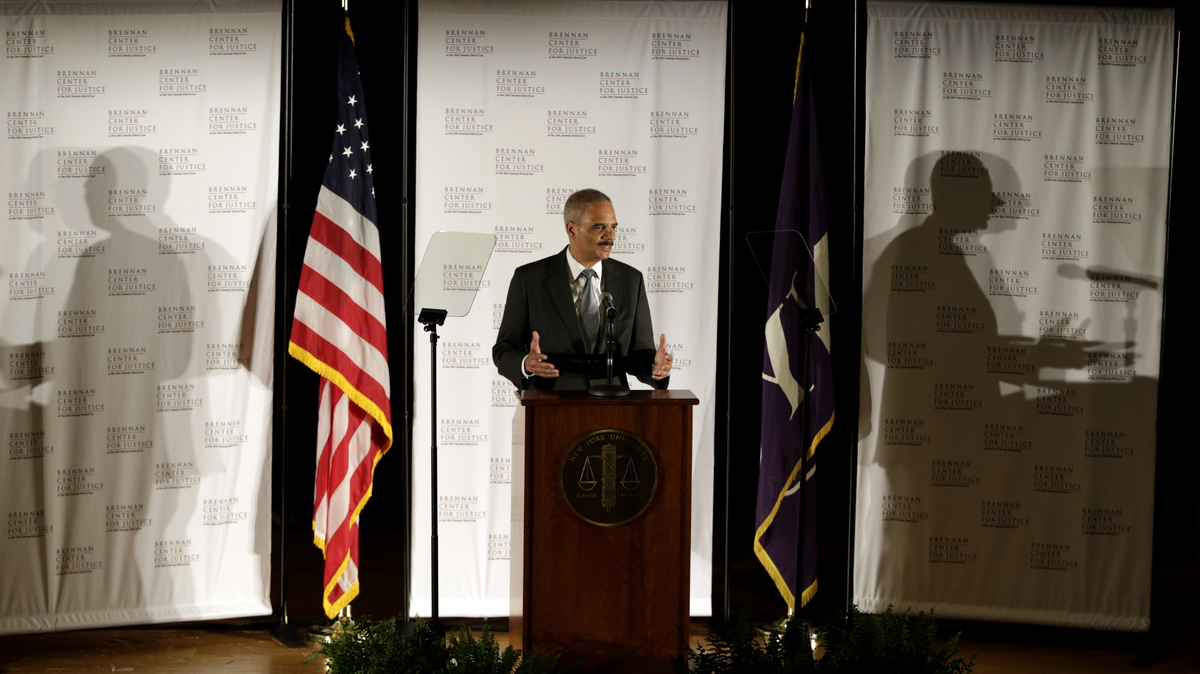 In the past year, the U.S. prison population fell by roughly 4,800, the first time in decades the number has gone down, according to the Justice Department. Attorney General Eric Holder discussed the findings in New York on Tuesday.

The U.S. is seeing "historic" progress in reducing both its crime and its incarceration rates, Attorney General Eric Holder said, with the federal prison population falling by some 4,800 inmates in the past year — "the first decrease we've seen in many ‎decades."

The numbers reflect a reversal from predictions from as recently as last November, when the federal prison population was projected to stay level in 2014, with nearly 219,300 inmates. But the raw number fell — and Holder says the incarceration rate per 100,000 Americans did, too.

Looking at both state and federal statistics, the attorney general said that in a roughly five-year span, both the overall crime rate and overall incarceration rates fell by around 10 percent, something that hadn't happened in more than 40 years, he said.

Holder highlighted that data in a speech Tuesday in which he cited a need to "strengthen America's criminal justice system and reduce our over-reliance on incarceration." Speaking at a conference at New York's Brennan Center for Justice, Holder reported progress and said new data suggest the trend will continue.

"Our new projections anticipate that the number of federal inmates will fall by just over 2,000 in the next 12 months — and by almost 10,000 in the year after," Holder said.

Calling those results "nothing less than historic," Holder noted that 10,000 inmates represent the rough equivalent of the combined populations of six federal prisons, filled to capacity. But he also acknowledged that no prisons will be closing down, "because our system is operating at about 30 percent above capacity." (We'll note that in quoting Holder, we're referring to his speech as prepared for delivery.)

To put those numbers in perspective, the U.S. federal prison population is around 215,000 this year, according to the Justice Department.

Describing a bipartisan view that the time for criminal justice reform has come, Holder touted both the Justice Department's updated policies and the work of senators such as Democrats Patrick Leahy and Dick Durbin, and Republicans Rand Paul and Mike Lee.

In his speech, Holder said that earlier attempts to get "tough" on criminals had been responsible for the growth in America's prison population — and that those policies had also "perpetuated a destructive cycle of poverty, criminality and incarceration that has trapped countless people and weakened entire communities — particularly communities of color."

The attorney general listed the effects of policies that dramatically boosted the number of people locked up in America's prisons:

"Although the United States comprises just 5 percent of the world's population, we incarcerate almost a quarter of its prisoners. The entire United States population has increased by about a third since 1980. But the federal prison population has grown by almost 800 percent over the same period. Spending on corrections, incarceration and law enforcement has exploded, consuming $260 billion per year nationwide. And the Bureau of Prisons currently commands about a third of the Justice Department's overall budget."

The attorney general went on to say that while crime rates had fallen in the past two decades, stiff prison sentences and high incarceration rates weren't the cause. He cited a recent Pew Charitable Trusts study that found states that had prioritized reducing their prison population had also seen crime go down.

Holder added that "the one state — West Virginia — with the greatest increase in its incarceration rate actually experienced an uptick in crime."

Holder was the keynote speaker Tuesday afternoon at a conference about reforming the justice system, hosted by the Brennan Center for Justice at the New York University School of Law. The conference also brought the release of a report today on the task of reducing both prison populations and violent crimes.

Compiled with the help of federal prosecutors and former Attorney General Janet Reno, the report (embedded below) suggests changing how U.S. attorneys' offices are evaluated and funded, to base those practices on how the offices' work to reduce both crime rates and mass incarceration.