Accessibility links
Obama At U.N.: World Risks Being Caught In 'Undertow Of Instability' : The Two-Way The president, in an address to the General Assembly, says nations are at a crossroads and that the international system must meet challenges ranging from terrorism to disease.

Obama At U.N.: World Risks Being Caught In 'Undertow Of Instability'

Obama At U.N.: World Risks Being Caught In 'Undertow Of Instability' 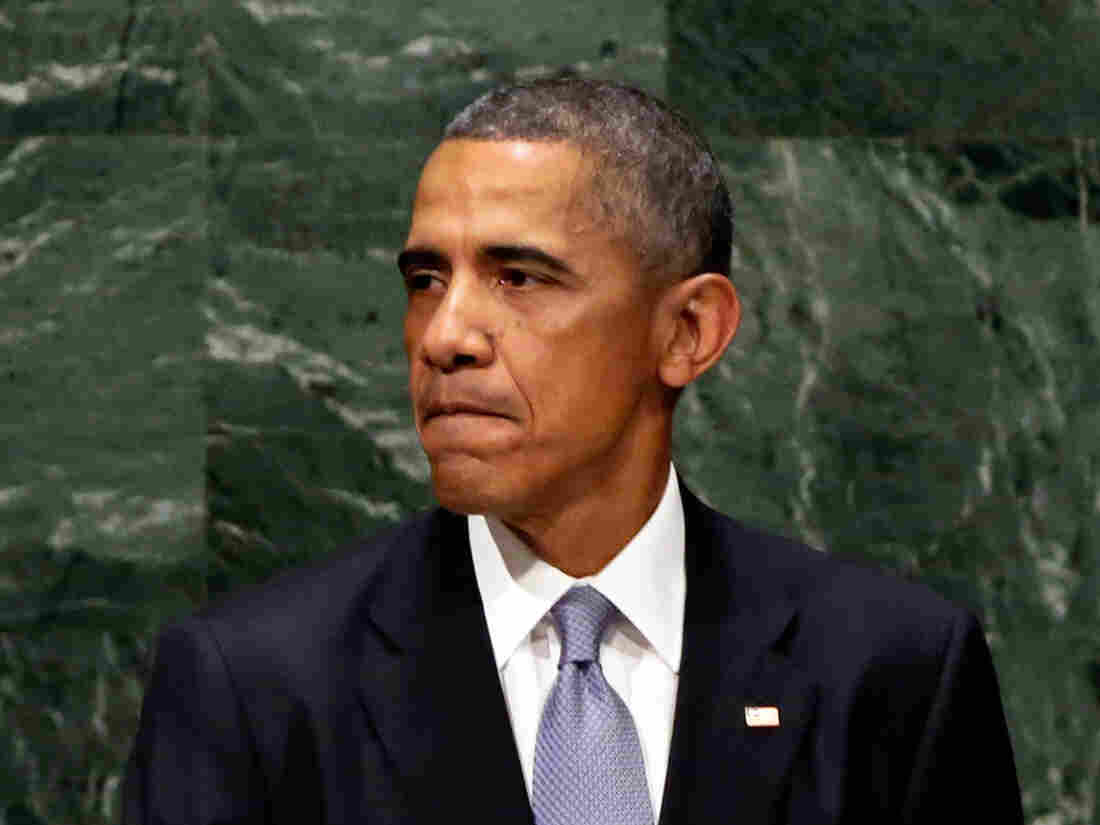 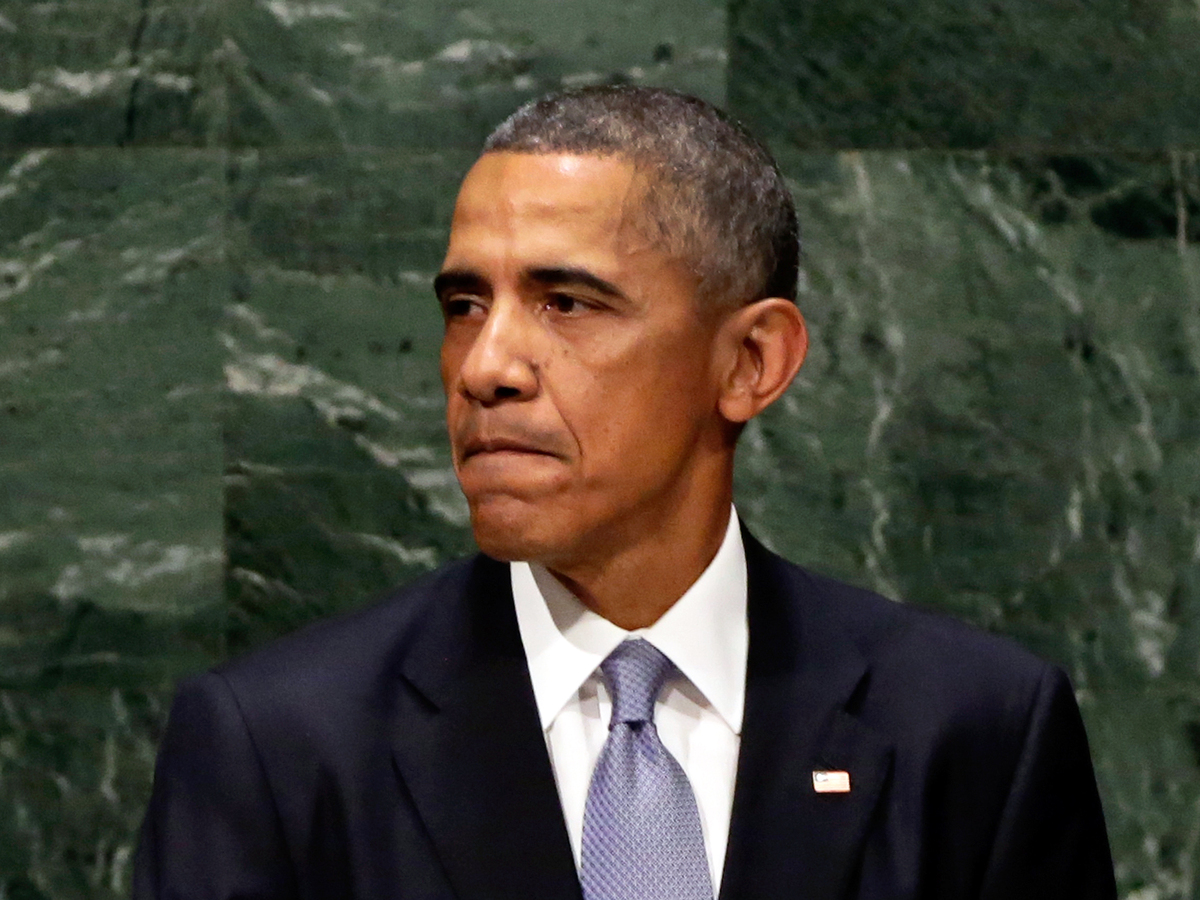 President Obama addresses the 69th session of the United Nations General Assembly, at U.N. headquarters in New York on Wednesday.

President Obama told a gathering of the U.N. General Assembly today that the world is living in "pervasive unease" from such crises as terrorism, expansionism and the Ebola epidemic. He challenged the world body to fix the international system or risk being "pulled back by an undertow of instability."

"We come together at a crossroads between war and peace, between disorder and integration, between fear and hope," the president told member nations at U.N. headquarters in New York.

"I often tell young people in the United States that despite the headlines, this is the best time in human history to be born, when you are more likely than ever before to be literate, to be healthy and to be free to pursue your dreams," Obama said. "And yet there is a pervasive unease in our world — a sense that the very forces that have brought us together have created new dangers, and made it difficult for any single nation to insulate itself from global forces."

Obama challenged the assembly to "renew the international system that has enabled so much progress."

"We can reaffirm our collective responsibility to confront global problems, or be swamped by more and more outbreaks of instability," he said. "For America, the choice is clear. We choose hope over fear."

The following are some highlights from the president's address.

"With access to technology that allows small groups to do great harm, they have embraced a nightmarish vision that would divide the world into adherents and infidels — killing as many innocent civilians as possible; and employing the most brutal methods to intimidate people within their communities."

"Muslims the world over aspire to live with dignity and a sense of justice. And when it comes to America and Islam, there is no us and them — there is only us, because millions of Muslim Americans are part of the fabric of our country."

"No God condones this terror. No grievance justifies these actions. There can be no reasoning — no negotiation — with this brand of evil. The only language understood by killers like this is the language of force. So the United States of America will work with a broad coalition to dismantle this network of death."

"[We] do not act alone. Nor do we intend to send U.S. troops to occupy foreign lands."

"The ideology of ISIL or al-Qaida or Boko Haram will wilt and die if it is consistently exposed, confronted and refuted in the light of day."

"[The] countries of the Arab and Muslim world must focus on the extraordinary potential of their people — especially the youth. Here I'd like to speak directly to young people across the Muslim world. You come from a great tradition that stands for education, not ignorance; innovation, not destruction; the dignity of life, not murder. Those who call you away from this path are betraying this tradition, not defending it."

"Where women are full participants in a country's politics or economy, societies are more likely to succeed. That's why we support the participation of women in parliaments and in peace processes, in schools and the economy."

Russia And Ukraine: U.S. 'On Right Side Of History'

"We will impose a cost on Russia for aggression, and counter falsehoods with the truth. We call upon others to join us on the right side of history — for while small gains can be won at the barrel of a gun, they will ultimately be turned back if enough voices support the freedom of nations and peoples to make their own decisions."

"As we speak, America is deploying our doctors and scientists — supported by our military — to help contain the outbreak of Ebola and pursue new treatments. But we need a broader effort to stop a disease that could kill hundreds of thousands, inflict horrific suffering, destabilize economies, and move rapidly across borders. It's easy to see this as a distant problem – until it isn't. That is why we will continue mobilizing other countries to join us in making concrete commitments to fight this outbreak, and enhance global health security for the long-term."

"America is pursuing ambitious reductions in our carbon emissions, and we have increased our investments in clean energy. We will do our part, and help developing nations to do theirs. But we can only succeed in combating climate change if we are joined in this effort by every major power. That's how we can protect this planet for our children and grandchildren."

"America is pursuing a diplomatic resolution to the Iranian nuclear issue, as part of our commitment to stop the spread of nuclear weapons and pursue the peace and security of a world without them. This can only happen if Iran takes this historic opportunity. My message to Iran's leaders and people is simple: Do not let this opportunity pass."

"America is committed to a development agenda that eradicates extreme poverty by 2030. We will do our part — to help people feed themselves, power their economies and care for their sick. If the world acts together, we can make sure that all of our children can enjoy lives of opportunity and dignity."

"America is and will continue to be a Pacific power, promoting peace, stability and the free flow of commerce among nations. But we will insist that all nations abide by the rules of the road, and resolve their territorial disputes peacefully, consistent with international law. That's how the Asia-Pacific has grown. And that's the only way to protect this progress going forward."