Accessibility links
At U.N., India's Modi Discusses Pakistan, Terrorism, And Peace : The Two-Way Prime Minister Narendra Modi spoke at the U.N. one day after Pakistan's prime minister, Nawaz Sharif. Modi said it's up to Pakistan to create an "appropriate atmosphere" for peace talks. 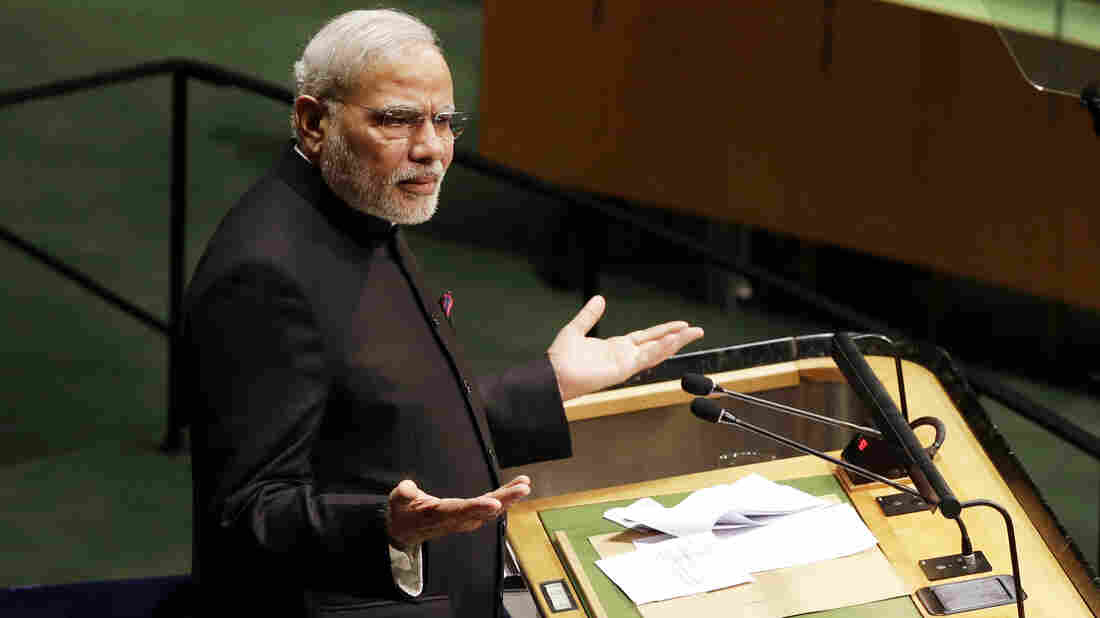 Narendra Modi, Prime Minister of India, speaks at the UN General Assembly in New York City Saturday. Addressing the question of peace talks with Pakistan, Modi said they must happen "without the shadow of terrorism." John Angelillo/UPI /Landov hide caption 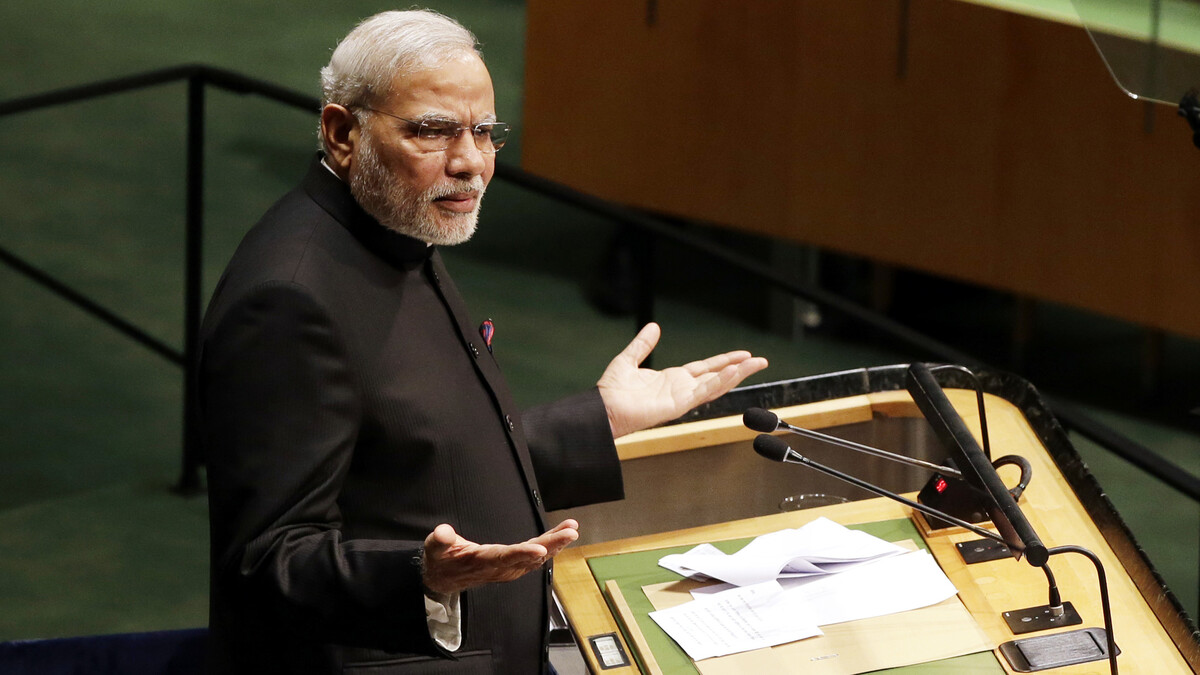 Narendra Modi, Prime Minister of India, speaks at the UN General Assembly in New York City Saturday. Addressing the question of peace talks with Pakistan, Modi said they must happen "without the shadow of terrorism."

Saying his country is prepared to resume peace talks with Pakistan, India's Prime Minister Narendra Modi told the U.N. General Assembly Saturday that the discussion must take place "without the shadow of terrorism."

Modi spoke at the U.N. one day after Pakistan's prime minister, Nawaz Sharif, criticized India's withdrawal from recent talks over the contested region of Kashmir in his speech to the assembly Friday. Today, Modi said it was up to Pakistan to create an "appropriate atmosphere" for those talks.

As he began a high-profile U.S. visit Friday, Modi hailed the U.S. as "a natural global partner" for India. At the U.N., he hinted that India would work with the U.S. in its efforts to combat extremism.

"Some countries are giving refuge to international terrorists," he said. "They consider terrorism to be a tool of their policy."

Rare is the leader who has undergone such a transformation of image. Once persona non gratis and denied entry to the U.S. for his alleged complicity in communal riots in the Indian state of Gujarat, Modi will soon be an honored guest at the White House.

A lawsuit filed in a New York federal court accuses Modi of human rights violations stemming from his tenure as Gujarat Chief Minister during the 2002 riots. The 2002 turmoil was a significant issue in the campaign, but Modi's large mandate quieted the storm at home.

A senior U.S. administration official said as a sitting head of government, Modi enjoys immunity and "there is no fear of the two governments being distracted."

Modi's visit is designed to reinvigorate a drifting relationship between the world's two oldest and largest democracies. The Indian leader arrives on the scene accorded the status of "a rock star."

The prime minister's maiden voyage to the U.S. has been given great hype by Indian television and news organizations. It has created high expectations. Will the prime minister and President Obama be able to make good on them?

Few politicians could ever hope to play Madison Square Garden, but a thriving Indian diaspora in the U.S. will be on hand for a sell-out event to honor Modi Sunday.

Global CEOs and top Wall Street bankers are expected to meet Modi and hear his pitch that India is "open for business" as a desired investment destination.

Modi can expect a warm reception in Washington. Discussions between President Obama and Modi will cover the waterfront: trade, defense, security, the growth of India's economy, the third largest economy in Asia, climate change and Ebola.

The Indian leader wants to attract foreign investors, and the U.S. business lobby will be closely watching as he explains what India is doing to create a more investor-friendly climate.

Washington wants to revive a strategic relationship it sees as key to its re-balancing in Asia, at time when China is perceived as being increasingly assertive in the South China Sea.

President Obama hosts a dinner for Prime Minister Modi on Monday. But the ordinarily sumptuous menu for visiting dignitaries will be adjusted: The Indian leader is fasting in accordance with Navratri, the nine-day Hindu festival that celebrates the triumph of good over evil.