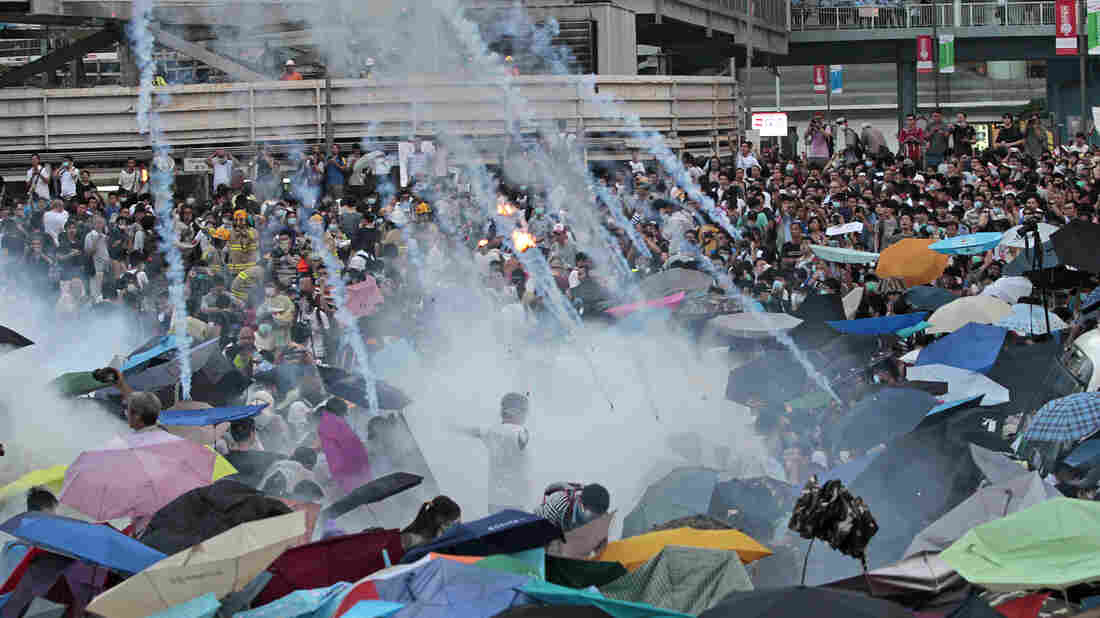 Riot police launch tear gas into a crowd of thousands of protesters outside the government headquarters in Hong Kong Sunday. Police warned of further measures as they tried to clear the streets. Wally Santana/AP hide caption 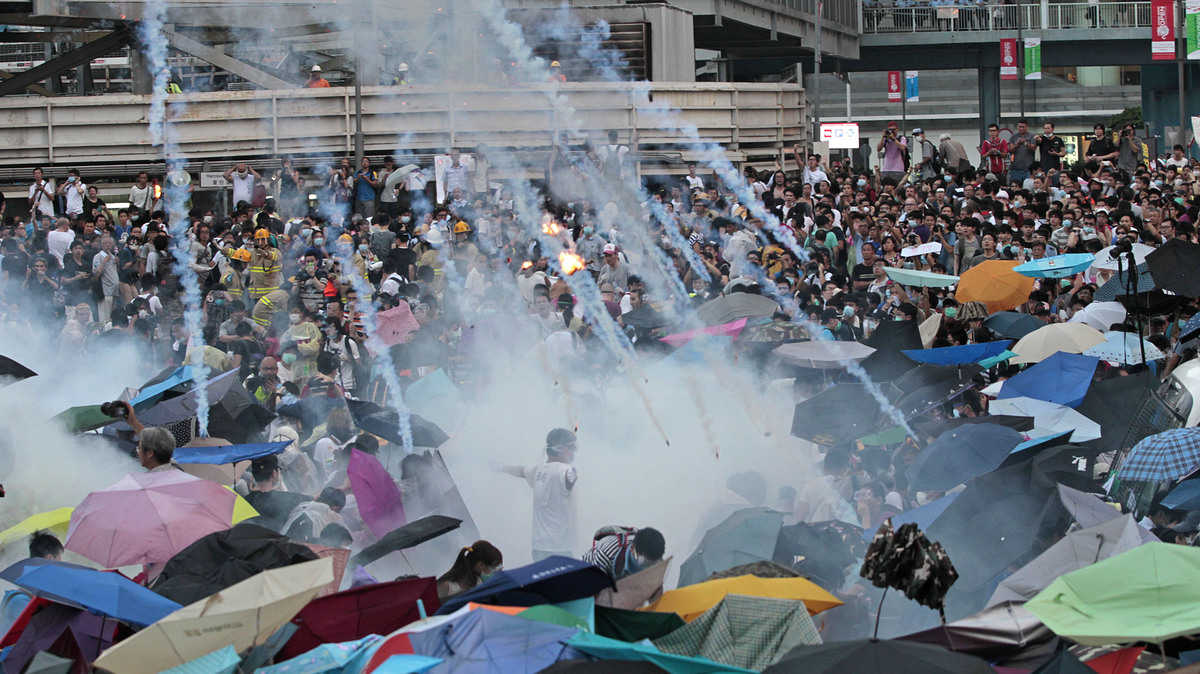 Riot police launch tear gas into a crowd of thousands of protesters outside the government headquarters in Hong Kong Sunday. Police warned of further measures as they tried to clear the streets.

Police in riot gear have been deployed to the streets of Hong Kong, where thousands of protesters are calling for free elections. Police used tear gas and pepper spray to try to clear the city's central business and government district. Organized by student groups, the Occupy Central protests have now been going on for three days.

Saying that the chance for severe injuries is too great, Occupy Central's organizers ask supporters to retreat from stand-offs with police.

"It is a matter of life and death," co-organiser Dr Chan Kin-man says, according to the South China Morning Post. "We put people's safety as our top priority.

But the large crowd is also hard to control, organizers say. The newspaper reports large gatherings have popped up elsewhere in Hong Kong, including Kowloon.

The Morning Post also says police have now released several student leaders of the protests who were arrested earlier this weekend.

Sunday night brought the first use of tear gas; video footage from earlier in the day showed protesters using umbrellas to try to deflect pepper spray and water cannons as officers attempted to disperse the crowd. Some protesters also worried that police might also use a "sound cannon" to send painful acoustic waves at them.

"I was here the past two days and I can't believe police would have to resort to tear gas," Matthew Chau, 13, tells the Morning Post. "My eyes hurt so badly and my lungs were burning," he said, adding that police had used excessive force.

Some protesters tried to protect themselves with goggles and bits of plastic covering their faces. Others said they hadn't expected the tear gas would be used.

"No one even guessed the police would be so violent. We are unarmed, we only have our hands," Felix Tang, 25, tells the Morning Post. "Even if you know you are not going to succeed, it is wrong to stop trying." 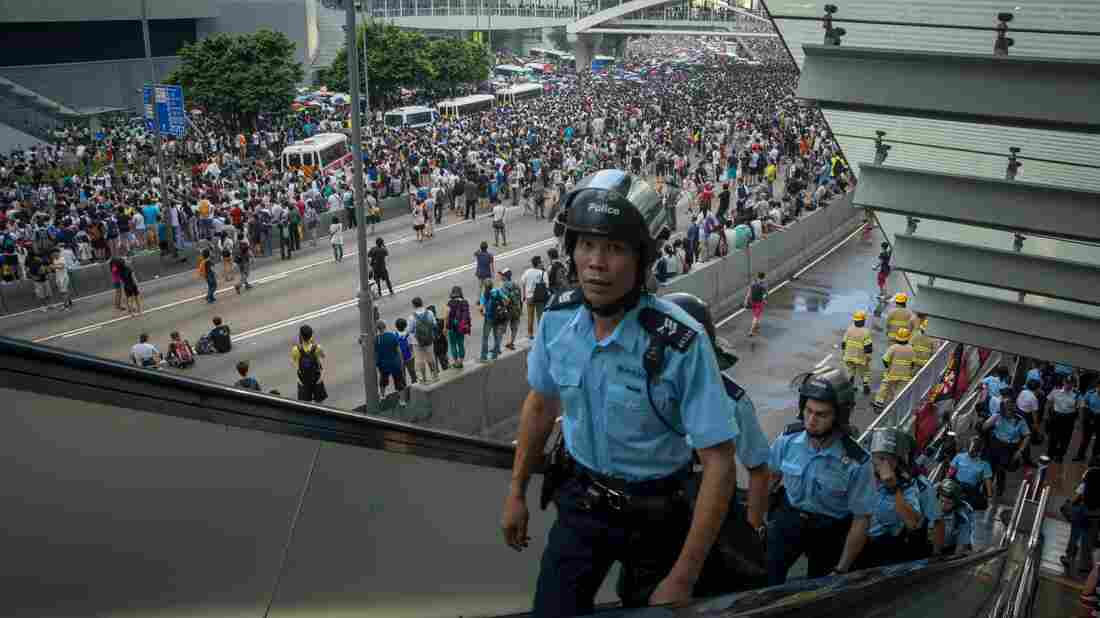 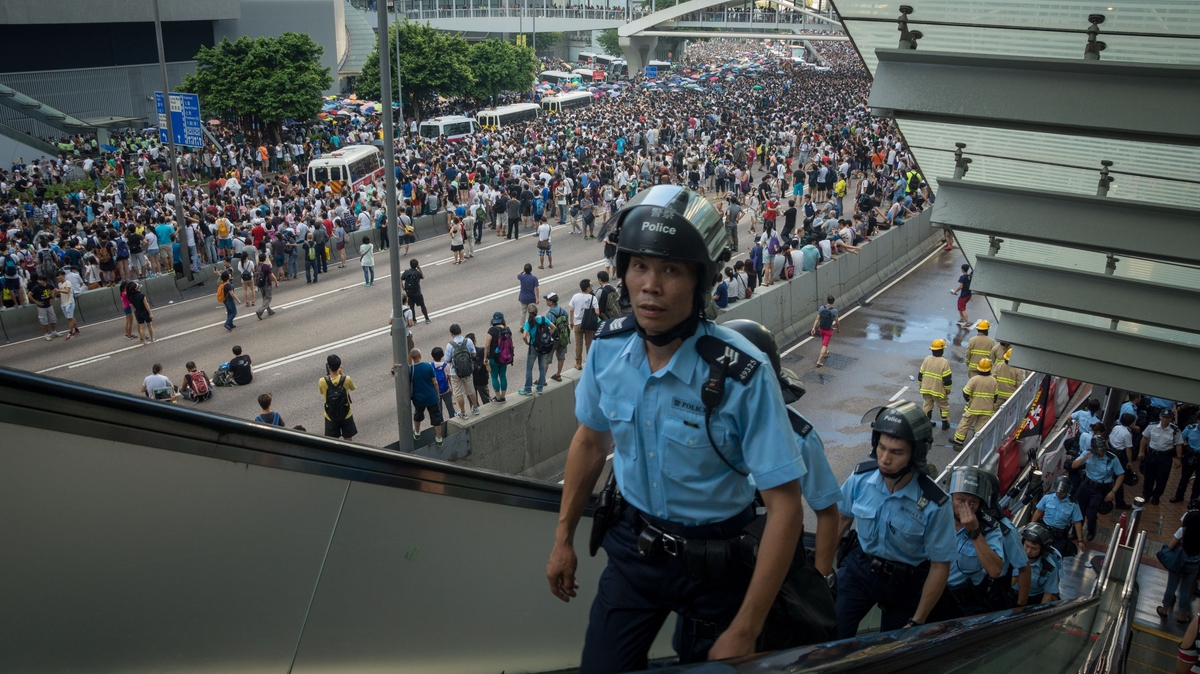 Police officers walk up an escalator after demonstrators storm onto a highway during ongoing pro-democracy protests in Hong Kong Sunday.

"Protesters brought traffic to a standstill on the main thoroughfares of Hong Kong Island. In some areas, they surrounded police who had tried to surround them. They warded off pepper spray with umbrellas, and threw back tear gas canisters which police fired at them in volleys.

"At a press conference, Hong Kong officials promised to consult with citizens about electoral reforms which demonstrators are calling for. But they added that the police are determined to appropriately deal with what they called the unlawful occupation of the city's center."

The protesters are calling for China's central government to ease restrictions on how the city elects its leader, particularly its limits on who can run for the office. They also want to replace Leung Chun-ying, who became the city's chief executive in 2012 with Beijing's support.

In a call for democratic reforms this summer, more than 780,000 votes were reportedly cast in an unofficial referendum, which was also put together by the Occupy Central group. You can see live video from Hong Kong's streets on the website of Apple Daily, a pro-democracy newspaper in the city.