Accessibility links
What's At Stake For Hong Kong? : The Two-Way As thousands of people throng Hong Kong's financial district to protest for democratic reforms, many wonder whether Beijing will crack down. 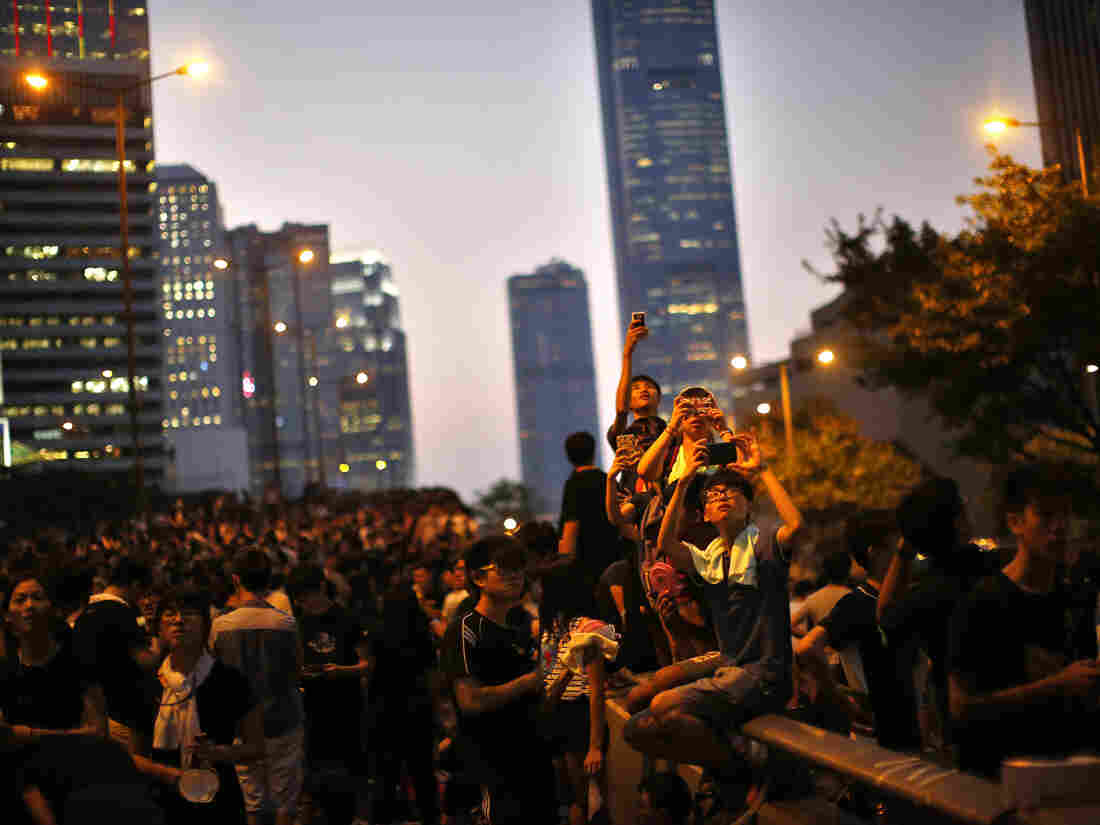 Protesters take pictures with their mobile phones on Monday as they block the main street to the financial Central district, outside the government headquarters in Hong Kong. Carlos Barria/Reuters/Landov hide caption 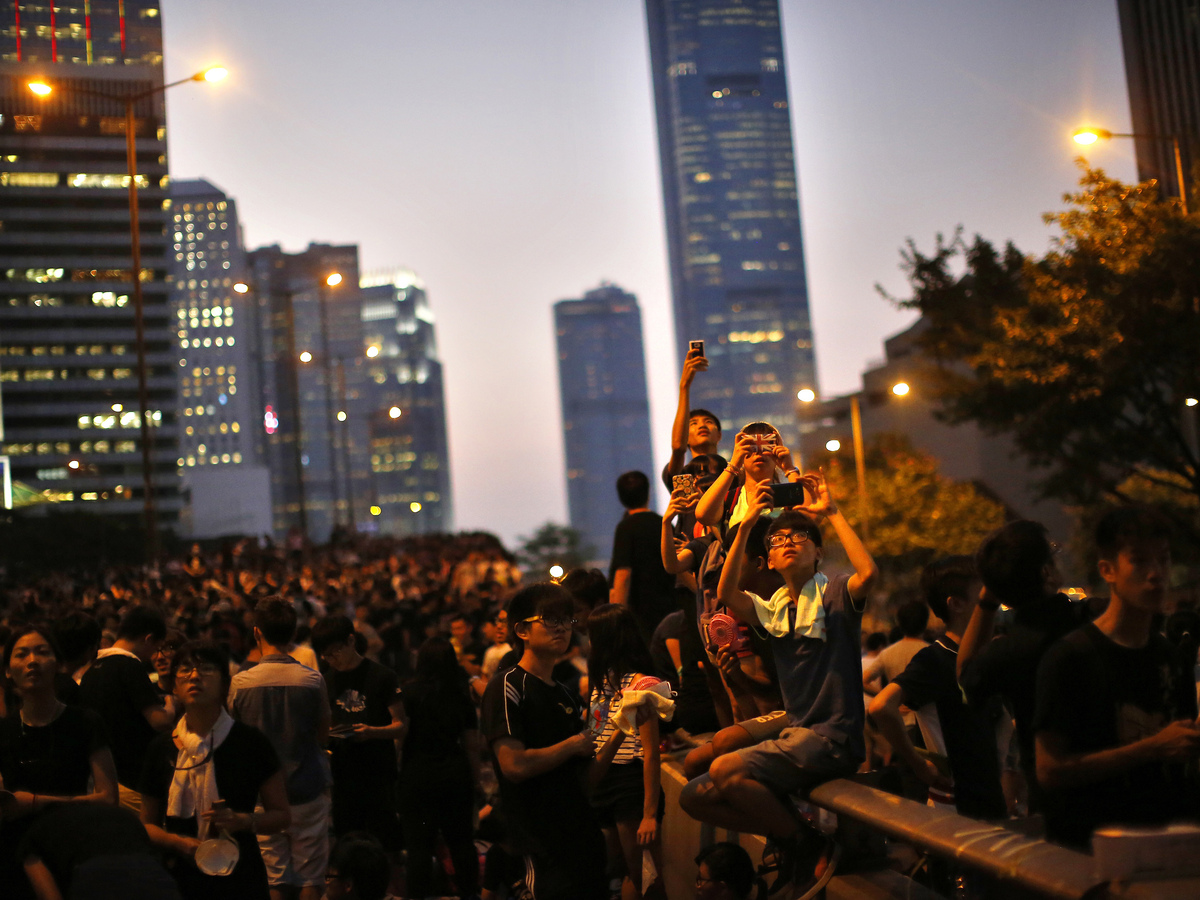 Protesters take pictures with their mobile phones on Monday as they block the main street to the financial Central district, outside the government headquarters in Hong Kong.

Masses of pro-democracy protesters continue to pack the streets in Hong Kong, defying police who have responded with tear gas. The demonstrators are angry that Beijing has insisted on vetting all candidates for the territory's next chief executive.

Here's a closer look at the issue and what's at stake:

A Brief History Of Hong Kong

Hong Kong island was ceded from China to Great Britain in 1842 in the Treaty of Nanjing, and Kowloon, which became the peninsular portion of the colony, was ceded in 1860. The so-called New Territories were leased in 1898. It was the impending expiration of the lease on the New Territories that triggered discussion in the 1980s between Britain and China on an agreement for London to hand back the entire colony. In 1990, Hong Kong Basic Law was accepted by Beijing as a mini-constitution for the territory, aimed at preserving some democratic rights after Hong Kong reverted to Beijing's control. Hong Kong was officially handed back to China on July 1, 1997.

What Was In The Handover Agreement?

Hong Kong was designated a "special administrative region" within China and promised a "high degree of autonomy," including the eventual election of its chief executive. Hong Kong people retained their own passports, making it easier for them to travel abroad than it was for their mainland counterparts. The territory has also retained the Hong Kong dollar as its currency and issues its own postage stamps, though Queen Elizabeth's image no longer appears on either.

In 1993, Lu Ping, China's top official on Hong Kong matters at the time, promised that the territory's affairs after the handover would be "completely within the sphere of the autonomy of Hong Kong."

"The central government will not interfere," Lu told People's Daily, according to The Wall Street Journal. China touted its relationship with Hong Kong as "one country, two systems."

Although Hong Kong's first several chief executives were selected by a committee appointed by Beijing, China promised that the election of the territory's leader would eventually be democratic.

Sir Richard Ottaway, a Conservative Party member of Britain's Parliament, said earlier this month that the handover agreement "did call for universal suffrage in the election of the chief executive."

What Has Transpired Since Then?

Although China promised open elections for Hong Kong's chief executive, "in 2004 it reinterpreted the Basic Law to mean that Hong Kong could not initiate political reform without its prior approval. In 2007 it ruled out elections in 2012," the Journal says.

In that year, Hong Kong saw hundreds of thousands of people march calling for greater freedoms.

The Journal says: "Last month's decree mandates a vetting system similar to the kind of 'democracy' that exists in Iran, where thousands of candidates are routinely disqualified by the regime."

In other words, in 2017, Hong Kong would get to choose from a few hand-picked candidates to replace current (and unpopular) Chief Executive Leung Chun-ying.

How Have Hong Kong People Reacted?

Hong Kong's pro-democracy movement has been active since before the 1997 handover, and in June, activists from the Occupy Central movement held an unofficial (and unauthorized) referendum, including open elections for chief executive. In a major embarrassment to Beijing, the referendum garnered 800,000 votes.

That same month, Beijing released a policy paper saying the territory does not enjoy "full autonomy" and that the central government must maintain "comprehensive jurisdiction over all local administrative regions," including Hong Kong.

The following month, on the July 1 anniversary of Hong Kong's handover to China, thousands of people thronged the streets of the Central district to demand democratic elections. That scene was repeated last month and again, in the latest protests, which began last week.

Who Is Leading The Protests?

One prominent student activist is Joshua Wong, 17, who The Washington Post says "was a leader of the 'Scholarism' movement, which opposed plans to require moral and patriotic education in Hong Kong." The newspaper adds:

"He was dragged away by police soon after students stormed into the government headquarters complex late Friday and was released from detention Sunday evening."

The South China Morning Post writes: "After his release, Wong — who claimed he had suffered bruises during his arrest — said he would return 'to join the fight' after taking a short rest."

How Has Beijing Reacted?

So far, Beijing's response has been muted, saying it would leave Hong Kong to handle the protesters on its own, though Foreign Ministry spokeswoman Hua Chunying said the protests had been spurred by "illegal movements."

Anthony also reports that China is "doing as much deleting as possible of pictures and information coming out of the area. Things such as Instagram are being blocked in China, so a lot of people are not able to get pictures, either through social media or the state-controlled Chinese media."

The protests have drawn uncomfortable comparisons to the pro-democracy demonstrations in Tiananmen Square in 1989 that Beijing at first seemed to tolerate, but eventually crushed in a bloody crackdown involving PLA troops and the killing of some 1,000 protesters. China's international reputation suffered considerably over the Tiananmen massacre, and Beijing no doubt wants to avoid a repeat.