Accessibility links
After Quiet Night Of Protests, Hong Kong's Government Offices Reopen : The Two-Way The government had warned that it wanted streets opened by Monday, but police didn't confront most occupiers. The protesters made room for commuters to enter government offices and return to work. 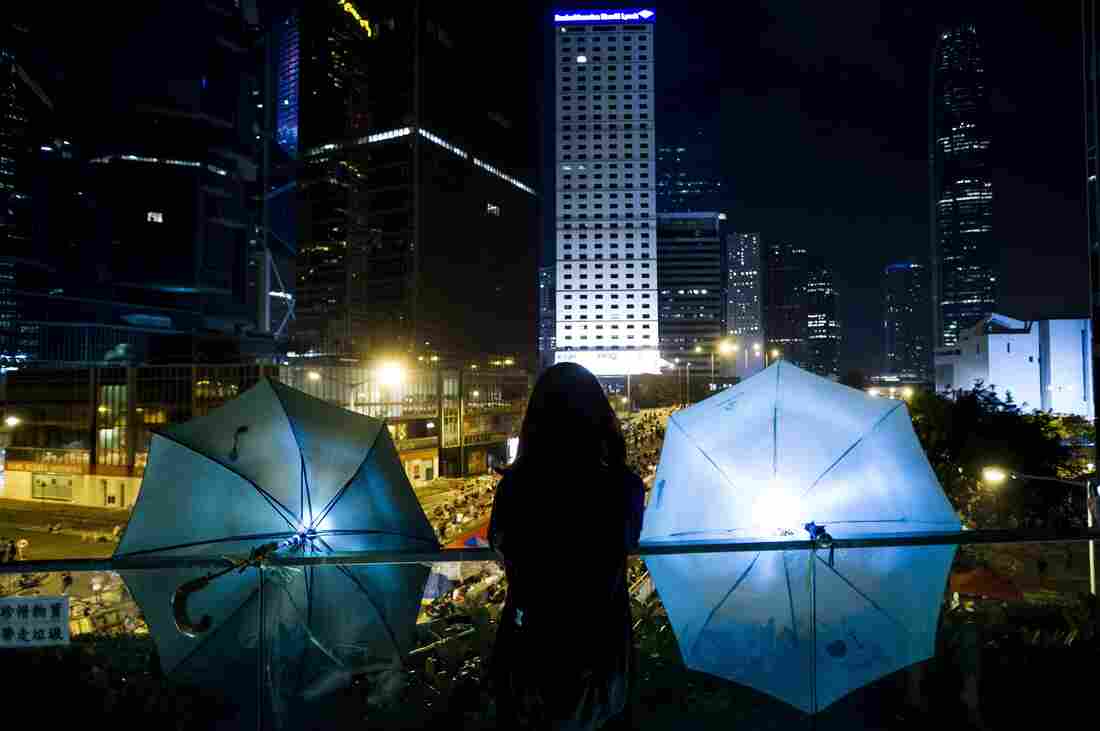 A woman stands between two umbrellas as she looks over the bridge to Admiralty district on Sunday in Hong Kong. Xaume Olleros/AFP/Getty Images hide caption 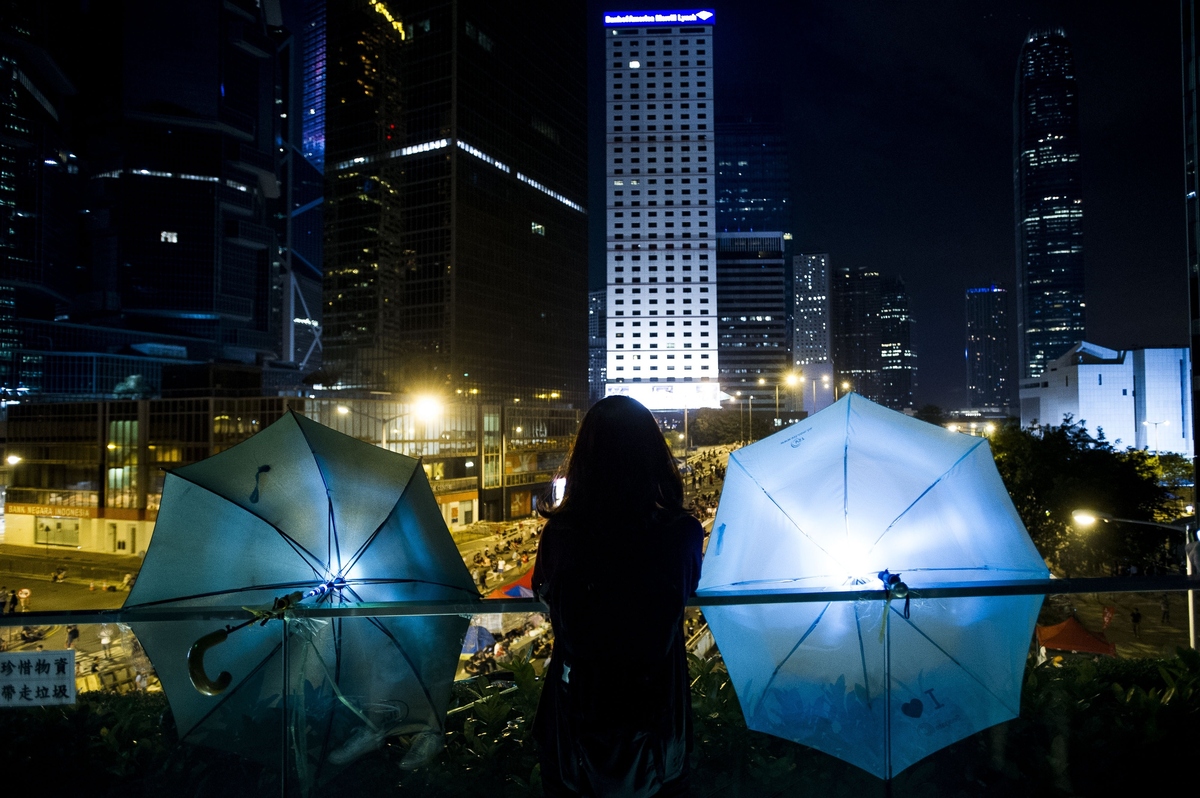 A woman stands between two umbrellas as she looks over the bridge to Admiralty district on Sunday in Hong Kong.

The protesters occupying busy regions of Hong Kong have not entirely withdrawn, but they have made room for commuters to enter government buildings. Civil servants have returned to work, The Associated Press reports, barriers blocking the doors to the government headquarters have been removed, and schools across the city are reopening.

The quiet morning comes after a tense day Sunday, when protesters throughout Hong Kong debated whether they should decamp and open up some of the areas of the city they have been blocking in a massive act of civil disobedience that has paralyzed the city and placed them in a tense standoff with Beijing for more than a week.

After sunset, it initially appeared that pro-democracy protesters were clearing from the Mong Kok area of town, one of Hong Kong's busiest regions and also where some of the most intense violence has happened over the past few days. The South China Morning Post reports that protesters were also clearing part of Admiralty, the section of town that houses the offices of the chief executive.

But just as quickly as some protesters decamped, others took their place, spilling by the thousands onto some of the city's main arteries.

610am Mong Kok. Dawn breaks and still no movement on either side. Many students will stay even if leaders say leave pic.twitter.com/YJPqH8a8Lo

This despite some dire warnings issued by the government. As we reported on Saturday, Hong Kong Chief Executive Chun-ying Leung said police had "the responsibility and resolution to take all actions necessary to resume social order and let the government and all 7 million citizens resume their normal work and life."

As the sun rises in Hong Kong, the status quo is holding; protesters still occupy the streets, police officers are maintaining a presence, and no substantial confrontation has begun.

Globe and Mail Beijing correspondent Nathan VanderKlippe tweeted that protest organizers are "urging people to call replacements if they leave." Live video feeds from Admiralty and Mong Kok show crowds that are waking up, but not appearing to disperse.

Dawn is in a couple of hours and things in Hong Kong remain peaceful. Of course, sunrise is important because Chun-ying Leung, Hong Kong's chief executive, said police would take "all actions necessary" to make sure that schools and government offices open on Monday.

Live images from the city, however, show that protesters are still sprawled across some of the city's main arteries. The message from the Hong Kong Federation of Students was clear: Students were not going anywhere until a compromise is reached with the government — even if police use force.

Here's how the South China Morning Post sets the scene:

"The demonstration sites have mostly turned quiet this early morning, with police keeping their distance. In Causeway Bay, around 150 demonstrators have camped out overnight, with the majority remaining chatty and few sleeping early.

"Admiralty and Mong Kok also remain peaceful, a stark contrast to the tear gas and scuffles that occurred at both sites earlier this week. A police cleanup of both areas seems unlikely at this hour."

Tung Chee-hwa, Hong Kong's first chief executive after the territory was transferred from the United Kingdom to China, has issued a chilling statement, pleading with demonstrators to get off the streets.

According to a translation posted on Reddit's live blog of the situation, Tung said the movement's "desire for democracy is clearly heard," but it's time to end these acts of civil disobedience.

"I'm worried about the students' safety as many parents and teachers in the city are," he wrote. "Therefore, I urge you to leave the protests for your own safety."

In a lot of ways, that statement echoed the one made by Democratic Party member and Hong Kong University associate professor Dr. Law Chi-kwong on Saturday.

"Things can turn very drastic within the next couple of hours," Law wrote. "I am begging everyone I know to leave." 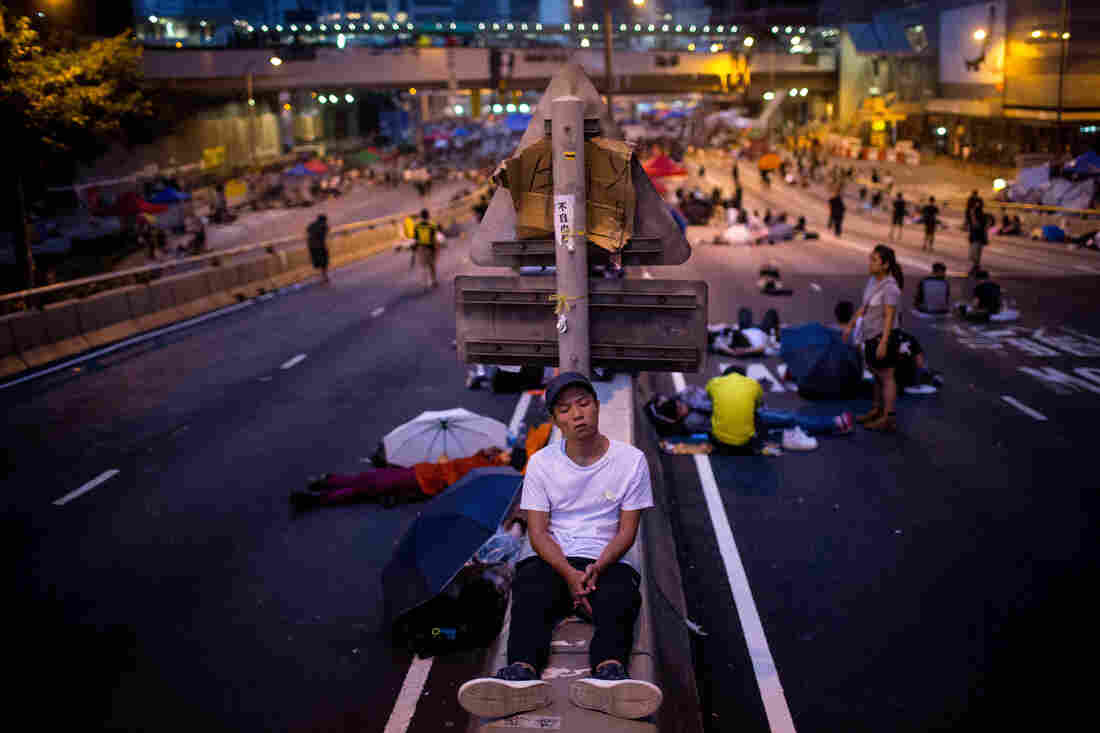 A pro-democracy protester sleeps on a concrete road divider on a street outside the Hong Kong Government Complex on Sunday in Hong Kong. Chris McGrath/Getty Images hide caption 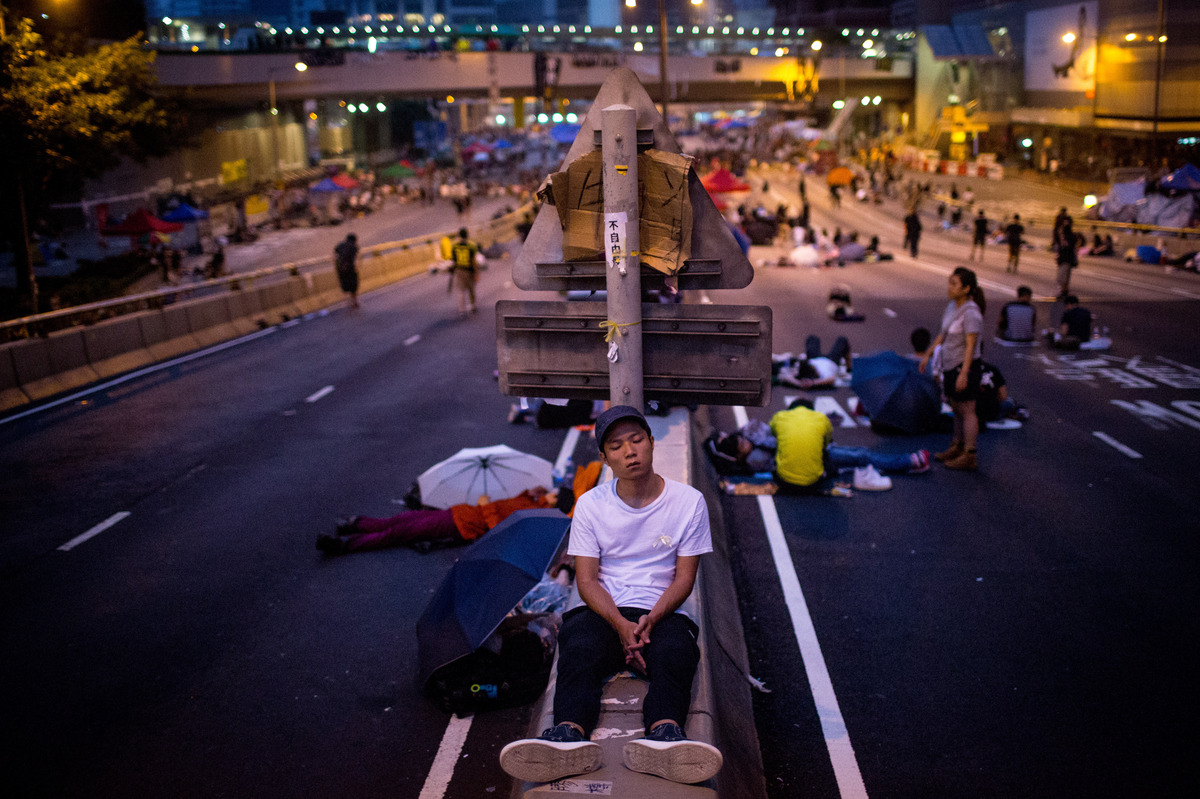 A pro-democracy protester sleeps on a concrete road divider on a street outside the Hong Kong Government Complex on Sunday in Hong Kong.

Watching a live feed from the Admiralty and Mong Kok areas of Hong Kong, one thing is for certain: It does not appear that protesters are going anywhere. In fact, it appears that crowds in those two areas have grown.

The South China Morning Post reports that Federation of Students secretary-general Alex Chow Yong-kang addressed the crowd this evening, saying they are preparing for talks with the government.

Chow, however, noted that their demands had not changed: The federation wants to be able to nominate whomever they want as the city's next chief executive.

Reporting from Hong Kong, NPR's Anthony Kuhn says that just as some protesters announced they were leaving the area surrounding the chief executive's office, other protesters came in.

This protest, he says, has, after all, been very decentralized.

"As the Mong Kok protesters were divided on moving out, there was similar confusion in Admiralty as dozens of protesters re-occupied the junction of Lung Wo Road and Tim Wa Avenue (the main entrance to CY Leung's office) just moments after the crowd voted to clear that area.

" 'We strove hard to get this site. We shouldn't give up this site without any government decision in favour of us,' said Ben Liu Chi-fung, 20.

" 'The chief executive's office is an important site,' said student Tanson Tsui. 'I think we cannot give up the basic principle of our demonstration: to press for the government to undo the unjust electoral reform framework.' "