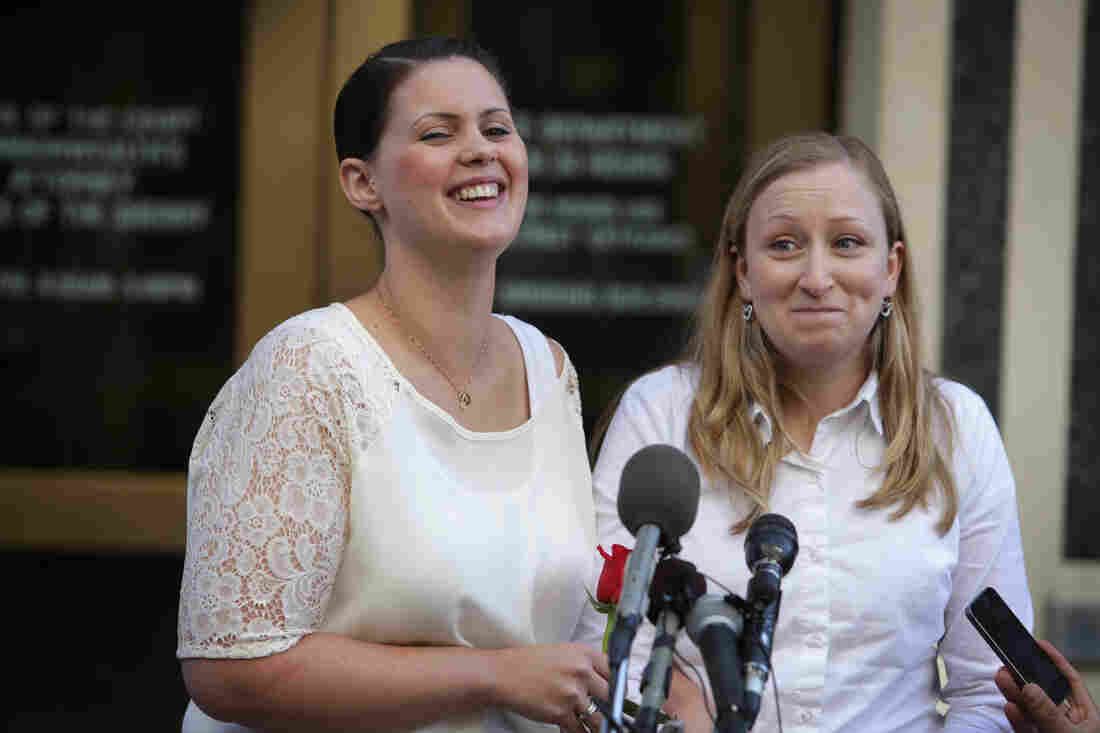 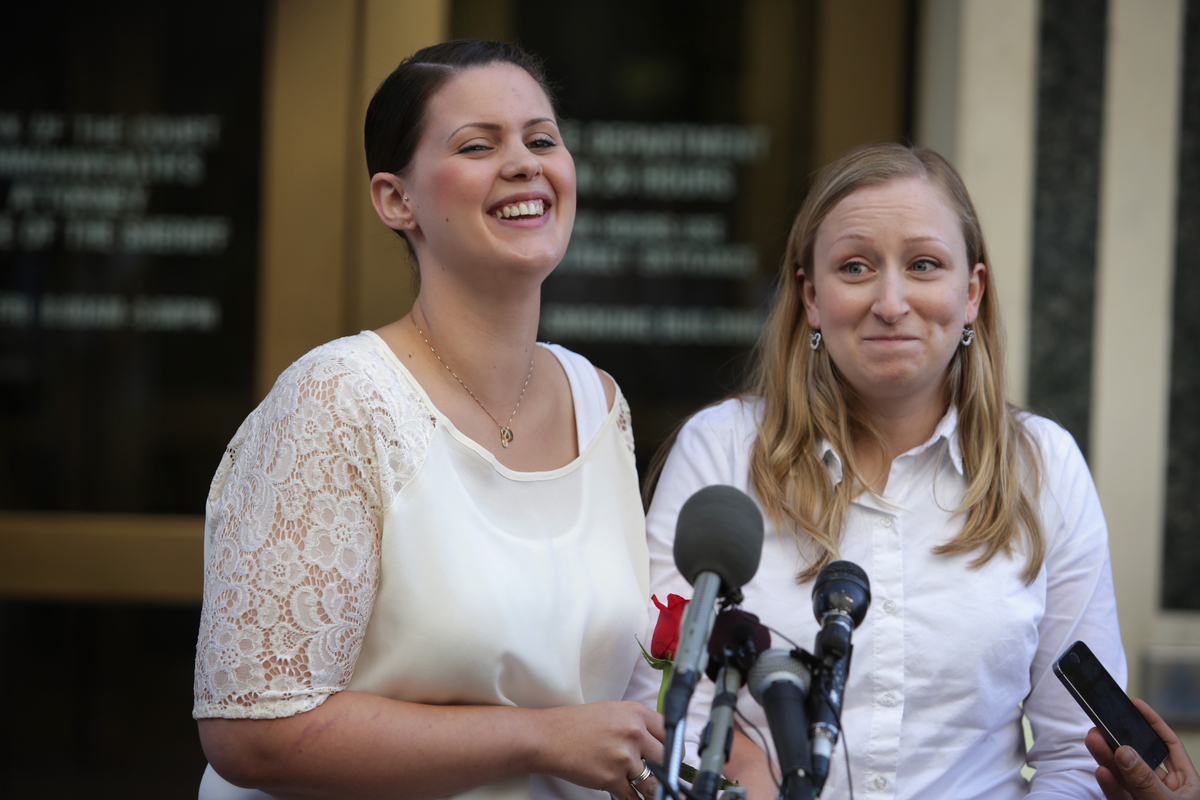 Erika Turner (right) and Jennifer Melsop of Centreville, Va., rejoice as they become the first same-sex couple to marry in Arlington County.

By refusing to review decisions striking down gay marriage bans from three appellate courts across the country, the Supreme Court gave a tacit nod to the legal reasoning in the cases before the courts.

As we reported, when the court denied certiorari on Monday it meant that gay marriages became legal in 11 states, where the courts have jurisdiction. It's still possible that an appeals court in the future could uphold a state's gay marriage ban and the Supreme Court may step in to clear up those opposing decisions.

But for now, the decisions from the 4th, 7th and 10th Circuits are the prevailing legal reasoning concerning gay marriage.

With that, here's a summary of what the lower courts in those cases said.

-- In Bostic v. Schaefer, the 4th Circuit Court struck down Virginia's ban on gay marriage, saying it infringed upon the 14th Amendment's Equal Protection Clause. The court issued one lucid paragraph that clearly explains their thinking:

"We recognize that same-sex marriage makes some people deeply uncomfortable. However, inertia and apprehension are not legitimate bases for denying same-sex couples due process and equal protection of the laws. Civil marriage is one of the cornerstones of our way of life. It allows individuals to celebrate and publicly declare their intentions to form lifelong partnerships, which provide unparalleled intimacy, companionship, emotional support and security. The choice of whether and whom to marry is an intensely personal decision that alters the course of an individual's life. Denying same-sex couples this choice prohibits them from participating fully in our society, which is precisely the type of segregation that the Fourteenth Amendment cannot countenance."

-- In reviewing Walker v. Wolf and Bogan v. Baskin, the 7th Circuit struck down gay marriage bans in Wisconsin and Indiana. Again, this court reviewed these cases in terms of the 14th Amendment. The central question was whether these states had a "rational basis" to declare marriage only between a man and a woman.

Wisconsin said it had a legitimate government interest because of four reasons: tradition; the effects of gay marriage cannot be foreseen; the issue should be decided by a democratic vote; and allowing gays to marry would make the institution of marriage fragile.

The court rejected all those arguments, saying:

"To return to where we started in this opinion, more than unsupported conjecture that same-sex marriage will harm heterosexual marriage or children or any other valid and important interest of a state is necessary to justify discrimination on the basis of sexual orientation. As we have been at pains to explain, the grounds advanced by Indiana and Wisconsin for their discriminatory policies are not only conjectural; they are totally implausible."

-- The 10th Circuit has issued two opinions of note. In Kitchen v. Herbert, it overturned Utah's ban on gay marriage, relying heavily on the Supreme Court's decision that declared the federal Defense of Marriage Act unconstitutional.

Quoting that decision, the court said a ban on gay marriage "demeans" same-sex couples whose "moral and sexual choices the Constitution protects."

-- In Bishop v. Smith, the 10th Circuit invalidated Oklahoma's ban on gay marriage by referring back to its Kitchen decision. The court also took on another dimension.

The state argued that its ban on gay marriage was in its legitimate interest because "children have an interest in being raised by their biological parents." The court dismissed this argument, because the ban was not narrowly tailored to address this problem alone.

"Oklahoma's ban on same-sex marriage sweeps too broadly in that it denies a fundamental right to all same-sex couples who seek to marry or to have their marriages recognized regardless of their child-rearing ambitions. As with opposite-sex couples, members of same-sex couples have a constitutional right to choose against procreation. See Eisenstadt, 405 U.S. at 453 ('If the right of privacy means anything, it is the right of the individual, married or single, to be free from unwarranted governmental intrusion into matters so fundamentally affecting a person as the decision whether to bear or beget a child.' (emphasis omitted)). But Oklahoma has barred all same-sex couples, regardless of whether they will adopt, bear, or otherwise raise children, from the benefits of marriage while allowing all opposite-sex couples, regardless of their child-rearing decisions, to marry. Such a regime falls well short of establishing 'the most exact connection between justification and classification.' Gratz v. Bollinger, 539 U.S. 244, 270 (2003) (quotation omitted); see also Frisby v. Schultz, 487 U.S. 474, 485 (1988) ('A statute is narrowly tailored if it targets and eliminates no more than the exact source of the 'evil' it seeks to remedy.').

"In summary, none of the arguments presented by Smith that were unaddressed in Kitchen persuade us to veer from our core holding that states may not, consistent with the United States Constitution, prohibit same-sex marriages."