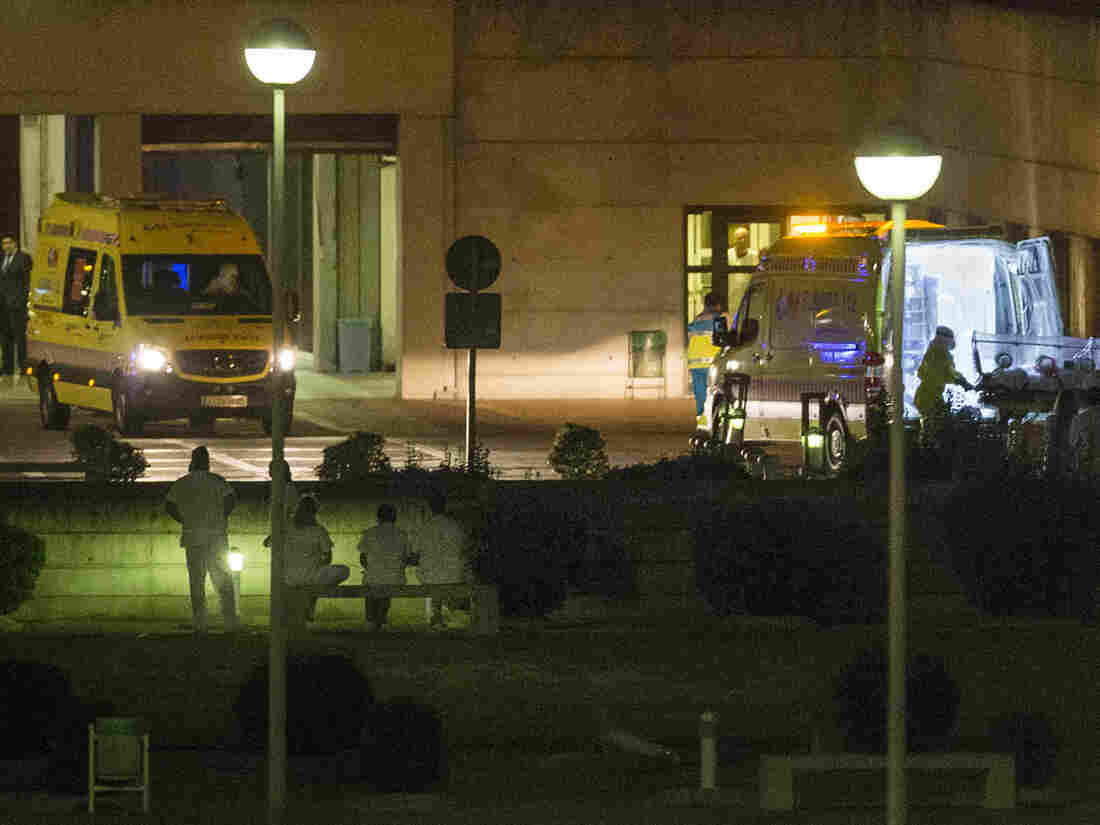 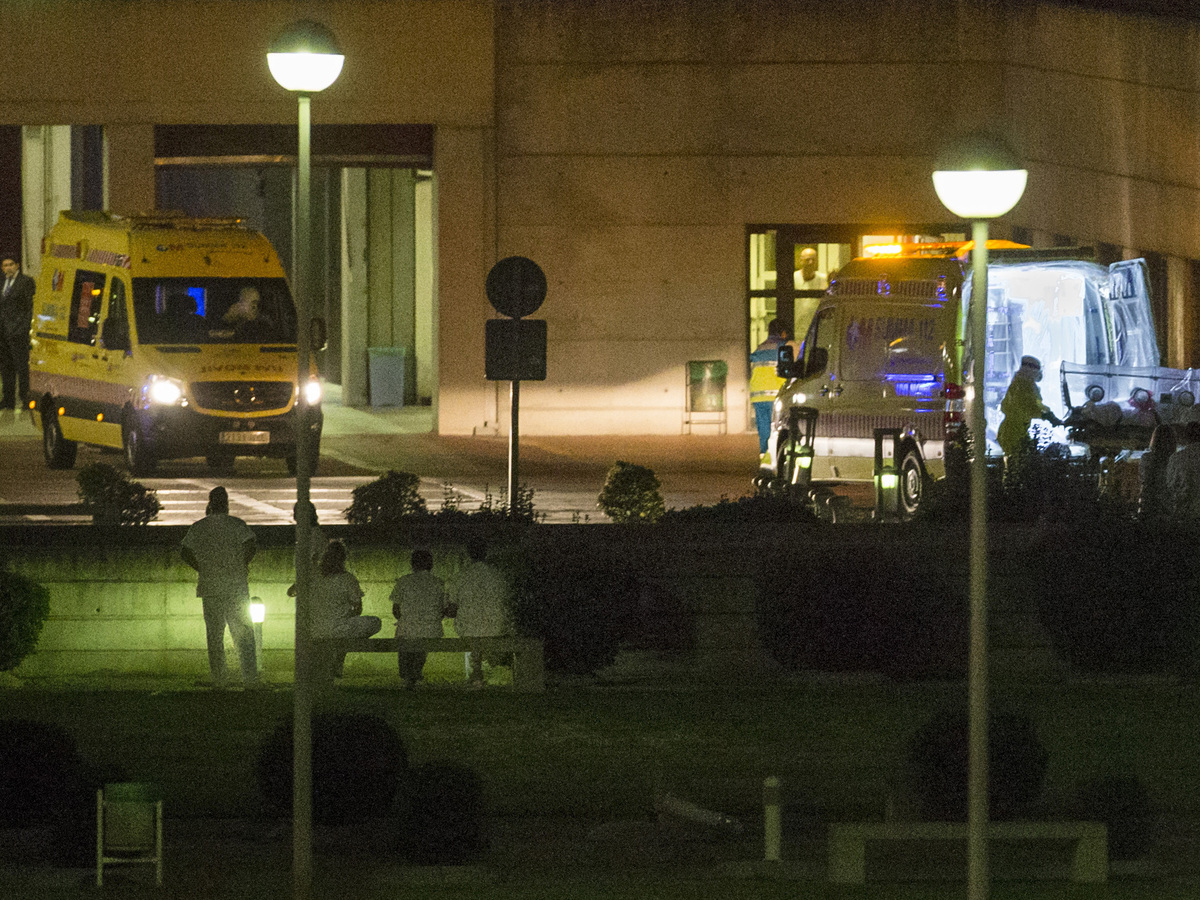 Medical personnel carry a Spanish nurse who contracted the Ebola virus into an ambulance at Madrid's Alcorcon Hospital on Tuesday.

The director of the Centers for Disease Control and Prevention says details on the measures to screen air passengers for Ebola, mentioned Monday by President Obama, will be announced this week.

Thomas Frieden, in an interview with All Things Considered, says he's "confident that you'll hear about it this week."

"When we tell you about it this week, we'll tell you when we'll start," Frieden says.

Obama said Monday that the U.S. would step up screening for travelers with the disease at airports in the United States and West Africa.

The CDC director's remarks come as doctors say a man being treated in Dallas for Ebola remains in critical condition but has stabilized somewhat, and that he is receiving an experimental drug. And, in Spain, a nurse who cared for an Ebola patient there has tested positive for the disease — the first known instance of a transmission of the virus outside West Africa.

Texas Health Presbyterian Hospital announced Monday that Thomas Eric Duncan, who apparently contracted Ebola in Liberia before coming to the U.S., is being treated with brincidofovir, an oral medicine developed by Chimerix Inc.

North Carolina-based Chimerix announced Monday that "brincidofovir has been provided for potential use in patients with Ebola Virus Disease. These requests were made by treating physicians."

"Chimerix is working closely with the FDA to finalize a clinical trial protocol early this week to assess the safety, tolerability, and efficacy of brincidofovir in patients who are confirmed to have an infection with the Ebola virus," the company said.

Duncan began receiving the drug Saturday, according to a spokeswoman for Texas Health Resources, which operates the hospital where Duncan is receiving care. Another patient, Ashoka Mukpo, a freelance cameraman who contracted the disease in West Africa and is being treated in Nebraska, is also receiving the experimental drug.

In Madrid, the health of the 40-year-old nurse with Ebola is said to have stabilized. Health officials said the woman, who has not been identified, had no symptoms besides a fever, according to The Associated Press.

The infected nurse had assisted in the treatment of a 75-year-old Spanish priest who had been flown from Liberia. The priest died after being treated with the experimental Ebola medicine ZMapp, the AP says.

"We followed the protocol and we don't know how she got infected," Mato told a news conference.

"We know she entered the infected priest's room twice — once to treat him and once after he died to collect some of his things," said Dr. Antonio Alemany, a health official from the regional government of Madrid. "As far as we know, she was wearing a protective suit the whole time and didn't have any accidental contact with him."

Alemany said the nurse went on vacation for a week after treating the priest, but he didn't say where. He said that all of the woman's co-workers were being monitored twice a day for fever.

The World Health Organization issued a statement saying: "Spanish authorities are conducting an intensive investigation of this case, in order to determine the mode of transmission and to trace those who have been in contact with the health care worker. WHO is ready to provide support to Spain, as and if required."

The Guardian reports that health officials in Madrid have blamed substandard equipment and "a failure to follow protocol" for the nurse's infection:

"Health authorities announced on Monday that a Spanish nurse at Madrid's Carlos III hospital who treated a patient repatriated from Sierra Leone had twice tested positive for Ebola.

"Her husband has also been admitted to hospital and is in isolation, and health authorities said they were testing a second nurse from the same team that treated both repatriated Ebola victims. In this case, the nurse contacted the authorities on Monday complaining of a fever. She was in isolation in the Carlos III Hospital while authorities waited for the test results, a spokesperson for the Madrid regional government said."

The WHO estimates that Ebola has killed more than 3,400 people in West Africa, including 370 health care workers in hardest-hit Liberia, Guinea and Sierra Leone.