Accessibility links
Spanish Nurse Says She Reported Her Ebola Symptoms Several Times : The Two-Way A Spanish-language newspaper reports that Teresa Romero Ramos told authorities on three separate occasions before her quarantine that she had a fever. 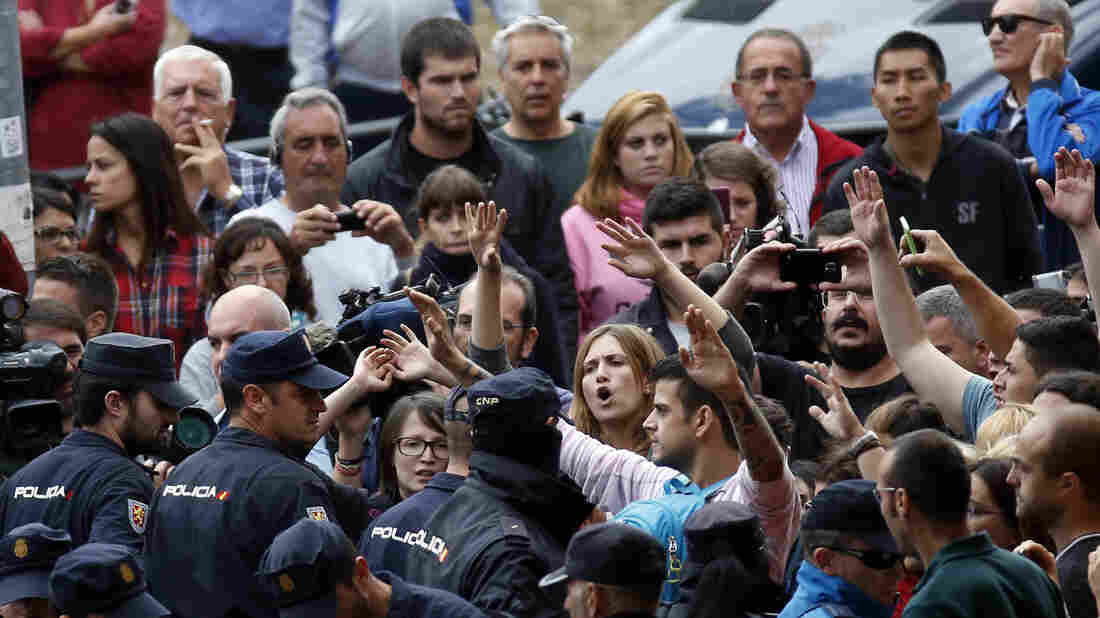 Spanish police block animal rights activists protesting Wednesday outside the apartment building of the Spanish nurse who contracted Ebola in the city of Alcorcon, outside Madrid. Susana Vera/Reuters/Landov hide caption 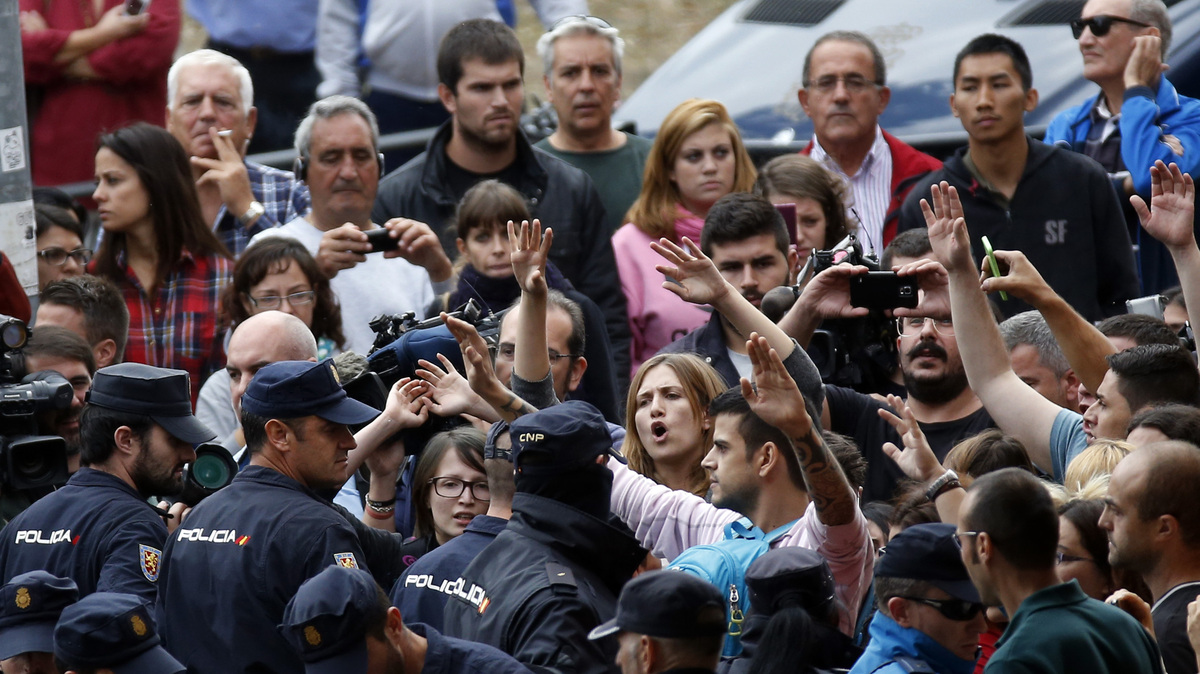 Spanish police block animal rights activists protesting Wednesday outside the apartment building of the Spanish nurse who contracted Ebola in the city of Alcorcon, outside Madrid.

Here's a roundup of the latest developments on Ebola. We'll update this post as news happens.

White House press secretary Josh Earnest confirmed that the U.S. will conduct additional screenings of passengers arriving from the Ebola-infected region of West Africa. JFK, Newark, Chicago O'Hare, Dulles and Atlanta's Hartsfield airports will implement measures that would affect about 150 passengers a day.

The World Health Organization today also updated its Ebola figures, reporting a total of 8,033 cases and 3,879 deaths from the disease in West Africa.

In Spain, Teresa Romero Ramos, the nurse who was admitted to a hospital in Madrid after caring for an infected priest who'd returned from West Africa, reportedly told health authorities three times that she had a fever before she was placed in quarantine.

There were also reports that she may have become infected by touching gloves to her face while she was removing a protective suit she wore while caring for an Ebola patient.

Her dog, Excalibur, was euthanized, reportedly inside the apartment she lived in with her husband. The dog's body was then transported to an incinerator, reporter Lauren Frayer tells NPR's Goats and Soda blog.

"In a note distributed on social media by several animal protection organisations, Javier Limón Romero said health officials had asked for his consent to put down the dog Excálibur.

" 'I said no. And they told me that they would ask for a court order to enter my house and put him down,' Romero said in the note.

"The appeal was sent from Limón Romero's isolation ward in the Carlos III Hospital where his wife, Teresa Romero Ramos, is also in quarantine." 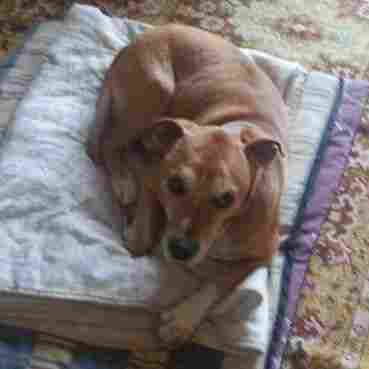 This is an undated image released Wednesday by animal rights organization PACMA of a dog named Excalibur who is owned by Javier Limon and his wife, a nurse who was infected with Ebola in Madrid. Authorities said they planned to euthanize the dog as a precaution. AP hide caption 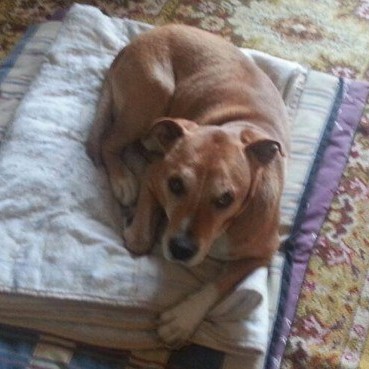 This is an undated image released Wednesday by animal rights organization PACMA of a dog named Excalibur who is owned by Javier Limon and his wife, a nurse who was infected with Ebola in Madrid. Authorities said they planned to euthanize the dog as a precaution.

A social media campaign to save the dog had been running with the Twitter hashtag #excalibur.

The Guardian newspaper cited the Spanish paper El Pais as saying that the nurse first contacted health authorities on Sept. 30. The Guardian writes:

" ... she complained of a slight fever and fatigue. Romero Ramos called a specialised service dedicated to occupational risk at the Carlos III hospital where she worked and had treated an Ebola patient, said Antonio Alemany from the regional government of Madrid. But as the nurse's fever had not reached 38.6C, she was advised to visit her local clinic where she was reportedly prescribed paracetamol [aspirin].

"Days later, according to the El País newspaper, Romero Ramos called the hospital again to complain about her fever. No action was taken.

"On Monday, she called the Carlos III hospital again, this time saying she felt terrible. Rather than transport her to the hospital that had treated the two missionaries who had been repatriated with Ebola, Romero Ramos was instructed to call emergency services and head to the hospital closest to her home. She was transported to the Alcorcón hospital by paramedics who were not wearing protective gear, El País reported."

Reuters quotes Spanish health authorities as saying today that another person being monitored in Madrid for Ebola had tested negative for the disease: 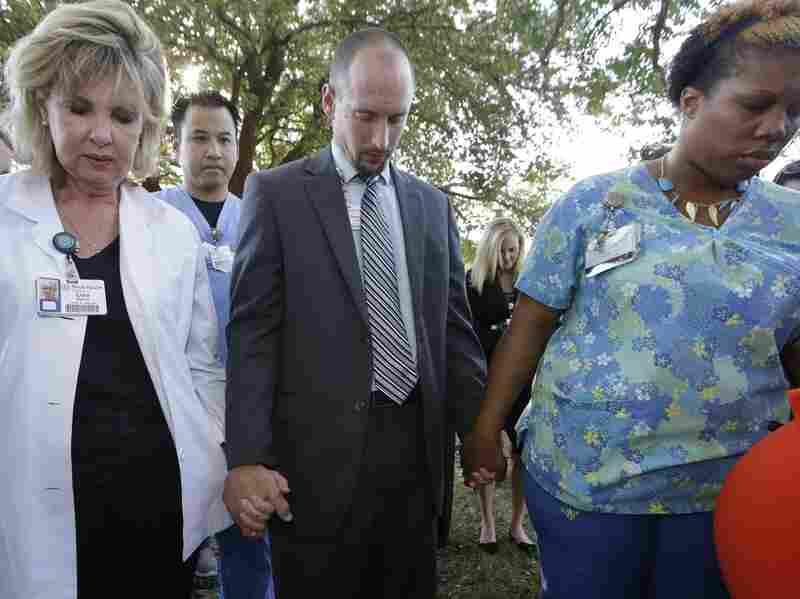 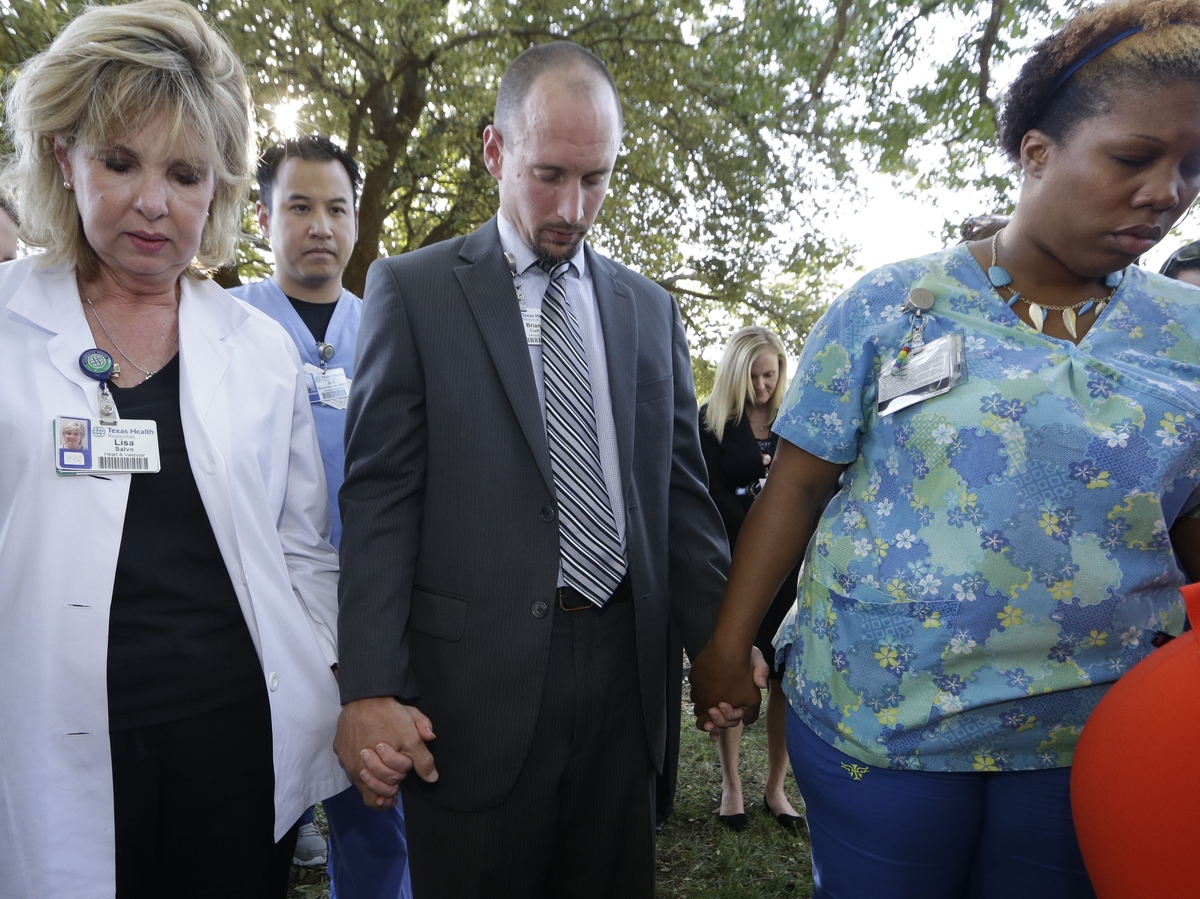 "The man, a Spaniard who had travelled from Nigeria, was one of several people hospitalised after authorities confirmed on Monday that a Spanish nurse had caught the disease in Madrid.

"A second nurse was also cleared of Ebola. A third nursing assistant was hospitalised late on Tuesday for monitoring, a source at La Paz hospital said — bringing the number of people examined in hospital for Ebola to five, two of whom tested negative."

The chief medical officer at La Paz University Hospital, Dr. German Ramirez, was quoted in El Mundo as saying that Romero contracted Ebola when she touched her face with gloves she had used in the room where she was treating Manuel Garcia Viejo, a priest who had worked in Liberia. Viejo later died from the disease.

In Dallas, as we reported in another post, Thomas Eric Duncan, the man who traveled from Liberia and was the first person diagnosed with the disease in the U.S., has died at Texas Health Presbyterian Hospital.

In a statement, the hospital said: "He fought courageously in this battle. Our professionals, the doctors and nurses in the unit, as well as the entire Texas Health Presbyterian Hospital Dallas community, are also grieving his passing. We have offered the family our support and condolences at this difficult time."

Health officials are still watching a group of people who had contact with Duncan after he developed symptoms of the disease but before he was placed in isolation at the hospital.

Duncan first sought hospital care on Sept. 26 and was admitted on Sept. 28. Before his hospitalization, 10 of the 48 people being monitored had close contact with him and are being most closely watched. Since the first symptoms of the disease can begin in eight to 10 days after exposure, "this is a very critical week," said Dr. David Lakey, the Texas health commissioner. "We're at a very sensitive period when a contact could develop symptoms. We're monitoring with extreme vigilance."

In Omaha, Neb., a freelance cameraman, Ashoka Mukpo, who contracted Ebola in West Africa and is being treated at the University of Nebraska Medical Center, will reportedly receive blood donated by Dr. Kent Brantly, who earlier survived the disease. Antibodies against Ebola in Brantly's blood could help Mukpo fight off the infection, officials say.

In Freetown, Sierra Leone, burial teams reportedly refused to collect bodies of Ebola victims in the capital and went on strike, apparently demanding more money, though officials there told The Associated Press that the situation has been "resolved."

The AP says: "In neighboring Liberia, health workers said they planned to strike if their demands for more money and safety equipment were not met by the end of the week."

And in Geneva, as NPR's Marilyn Geewax reports, the World Bank issued an estimate of the projected cost of the Ebola outbreak, saying it could reach $32.6 billion by the end of 2015 if the virus spreads significantly beyond worst-hit West Africa.

"The enormous economic cost of the current outbreak to the affected countries and the world could have been avoided by prudent ongoing investment in health systems-strengthening," World Bank President Jim Yong Kim said in a statement.