Accessibility links
Striking Mosaic Found In Greek Tomb Dates From 4th Century B.C. : The Two-Way Dating from the last quarter of the 4th century B.C., the mosaic covers a space of nearly 15 feet by 10 feet. It features two horses, a man and the god Hermes, in colorful detail. 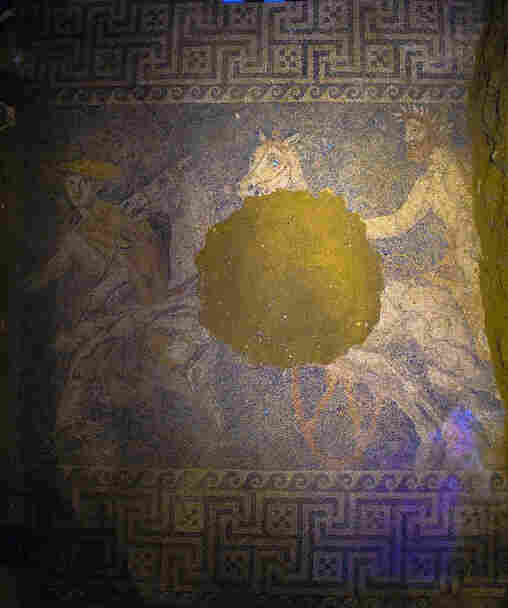 A mosaic uncovered in the huge tomb near the ancient Macedonian city of Amphipolis depicts a chariot being led by the god Hermes. Greek Culture Ministry hide caption

Archaeologists have uncovered an intricate and beautiful floor mosaic in a large tomb in northern Greece. Dating from the last quarter of the 4th century B.C., the mosaic covers a space of nearly 15 feet by 10 feet. It features two horses, a man and the god Hermes; it was found in a tomb that was discovered in August.

"The detail of the work is amazing, in the depiction of the horses, the persons, and the chariots and also the harmony of the colors," Greece's Times of Change site says.

The mosaic is made of small pebbles whose colors range from white, black and grey to blue, red and yellow. They're arranged to create a scene in which two horses draw a chariot carrying a bearded man with a laurel wreath on his head.

"The Greek God Hermes is shown leading, for he is the traditional guide to the spirits of the dead, into the underworld of Hades," according to the website The Amphipolis Tomb. Hermes is depicted wearing a hat and cloak, and carrying a caduceus.

Photos posted online by Greece's Culture Ministry show that the mosaic has been damaged in its center, but the accompanying notice says many of the pieces from the damaged area were found nearby. 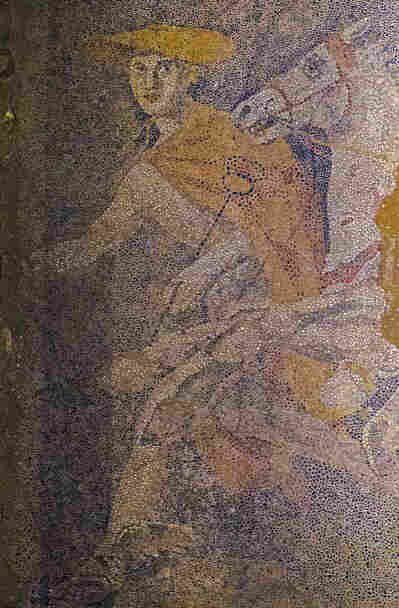 The Greek god Hermes is seen in a newly found mosaic, leading a chariot and its rider into the afterlife. Greek Culture Ministry hide caption

We've reported on the tomb before — and on its ties to the era of Alexander the Great. Last month, NPR's Joanna Kakissis asked the question "Who's Buried In The 'Magnificent' Tomb From Ancient Greece?"

From Athens, Joanna reports for our Newscast unit:

"The tomb near the ancient Macedonian city of Amphipolis likely doesn't contain the remains of the young conqueror who died in Babylon at age 32. But it could contain someone very significant from the era, says Robin Lane Fox, a British historian and a specialist on Alexander the Great.

" 'My suspicion would be that this is a very high-ranking companion in Alexander's former army,' Fox says, 'who has returned back, or been returned as a body, to his home in Amphipolis.'

"Archaeologists working on the site have so far refused interviews and have only released photos of their discoveries through the Greek government."